It’s time to start off week three of the LCS Championship with EG and C9 facing off to keep their LCS season alive.

With the Lower Bracket starting to heat up, Evil Geniuses (“EG”) and Cloud9 (“C9”) are the next two sides fighting for their lives. A loss here would send either of them home, and both sides desperately wanted to try to keep their Worlds dreams alive. C9 came into the series slightly favored, but it had all the makings of a messy five-game series before we started. In such a crucial series, Game One didn't start as C9 would have wanted, or needed. Fudge and Blaber dove into the top side tower, but Impact was easily able to stun Blaber under his tower, securing First Blood for himself instead. Soon after, C9 baited the top side of the map. With two members hiding in wait, Impact went in against Fudge and the trap was sprung. Fudge survived as C9 got themselves on the board. Then, C9 quickly followed that up in the mid-lane. Jiizuke tried to run but Blaber was able to pick him off as C9 reacted well to an early disadvantage.

A 5v5 fight at the Drake somehow resulted in zero deaths across the board. However, EG was able to claim the Drake. EG did make up for the lack of kills in the fight by picking off an out-of-position Zven in the bot-lane. Impact, despite claiming the kill onto Zven and securing a tower, instantly traded his life back underneath his own tower. Finally, we got our 5v5 action, and it was C9 who came out on top in the initial fight with two kills. Chasing down the remaining members, C9 traded one-for-one before claiming a Drake. With Baron vision secured, C9 later picked up a massive kill onto Danny, putting EG down to four members for 35 seconds. During this time, C9 secured the Baron with little to no pressure from EG and moved to 4k ahead.

C9 gained just 2k gold with the Baron, though the EG base was exposed. Nothing much happened between the Baron spawns, but the second it did, the action started. Here, C9 got a massive early kill, before trading over their support. With EG desperate to escape, C9 took down another three members before claiming another free Baron as C9 looked to end. EG had no answer for the C9 Baron push as they swept aside the base of EG, took down three members and secured a first win of the series.

MORE FROM ESTNN
LoL Patch 13.1B Notes: No Patch 13.2 Due to the Cyber Attack Targeting Riot Games 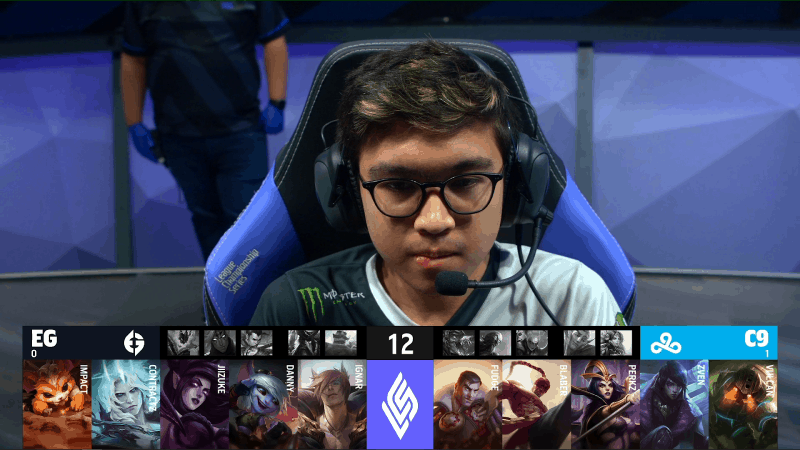 While not a First Blood, it was a big level one for C9 as Impact was forced to use his Flash early. Once the game got rolling, C9 managed to pick up that First Blood on the boot side, with Blaber assisting his bot-lane. More fighting in the bot-side ensued after EG looked to be exposed when they pushed a play on C9, with a TP from Perkz to back C9 up. But C9 failed to secure the kill as EG got some assistance of their own, taking a kill for themselves instead.

More big pressure across the map for EG, as they picked up two more kills on the top side. Blaber tried to reply in the mid-lane, but he was unable to finish off Danny. Then, soon after, there was a huge comeback team fight win for C9. In it, they picked up an early kill, and with a misplay from Danny, they picked up a second. The next important moment was another Baron fight in this series. The early fight was traded one-for-one, though C9 was the side who came out ahead. EG desperately fled, but they dropped another member as they did, handing Baron over to C9 too.

EG seemed to be making too many costly mistakes under the pressure. C9 doesn’t make great use of their Baron buff yet again, however, Contractz hands them a free kill, putting C9 1k ahead. EG made a desperate play in the mid-lane to try and take something from the game, but it went horribly wrong. C9 was able to soak the pressure with Fudge Teleporting behind to break the EG line. As a result, EG lost three members and handed C9 their second Baron. With it, C9 pushed bot side, and despite desperate attempts to push them back, EG just couldn't do enough. C9 swept the base and moved onto match point. 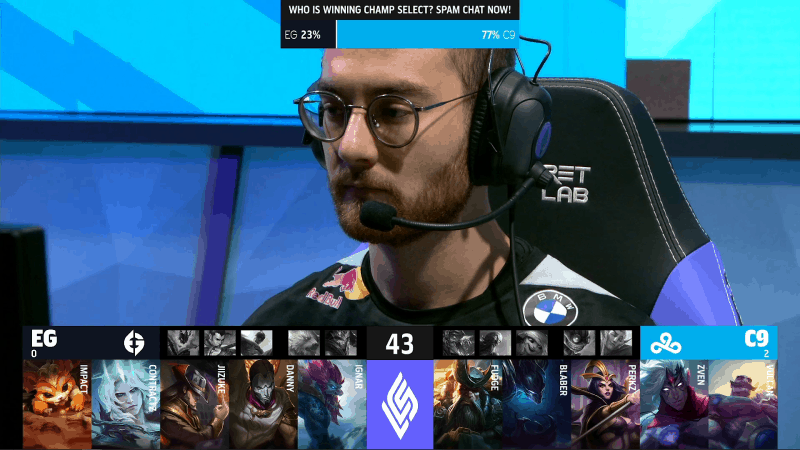 Again, it was First Blood for C9 in the deciding Game Three. With EG just one loss away from being sent home, that was not the start they needed. Moving through the early game, there was another kill for C9, this time on the top side, as Blaber utilizes the Nocturne ultimate to claim an easy kill. EG found a way onto the board with kills in the top and mid lanes as they secured a minor gold lead at the 15-minute mark. With C9 attempting to take a Drake, EG collapsed on them, taking down two members and moving to 2.5k ahead.

C9 was able to pick up the big kill in the next small skirmish as EG failed to take advantage of their mid-game lead. Just like that, C9 dropped the two front-line carries of EG and cleaned out the mid-lane. While Baron was up, C9 decided to leave it, instead opting to neutralize the gold. It wasn't long until there was another fight and it was fantastic for C9. EG threw everything at the C9 front line, but C9 held onto their ultimates for the opportune moment. As such, C9 turned won the fight and turned into a Baron as they claimed their fifth of the series.

Now equipped with the Baron buff, C9 made a push for the game. Unfortunately, EG couldn’t handle the damage C9 brought to the fight as their base was almost completely wiped out. However, EG lived to fight another day, even though they looked out of ideas. Eventually, C9 made a push to end the game, and despite a five-man stun from Impact on the Gnar, EG had no follow-up. Because of this, C9 cleaned out the rest of the base and took down the Nexus. A swift 3-0 in the end for C9 in a series they looked in complete control of from start to finish.