The 2019 World Championship Group Stage is drawing nearer to its end. The victors of Group B and Group A have been decided, and on this seventh day of competition, those from Group C were too. Dubbed the "Group of Death," it delivered fierce competition and excellent games from all the teams! The start of the day was an epic clash between the titans of SKT and RNG. It actually was similar to their first match, with RNG leading early on but losing to SKT in the end. They got First Blood from a Karsa gank onto Faker, then another kill at nearly the same time in the bottom lane 2v2. The game was still close though, as was seen from a Rift Herald fight that went one-for-one overall. The pendulum swung one way when SKT won a fight three-for-zero but swung the other way as RNG got two picks and secured the Baron.

This Baron buff helped RNG take a few towers, but due to mispositioning from Ming,  they lost a member and had to cut their siege short. As a result, both squads waited for the second Baron Nashor to spawn. It inevitably did, and this worked great for SKT since they ended up winning a team fight two-for-one mid before claiming their own buff. Like RNG, SKT knocked down some towers but couldn't do significant damage to their opponent's base. Then all of a sudden, RNG fully engaged on Effort's Leona in the mid lane. A team fight erupted, but this was not the fight RNG wanted, as SKT slaughtered each of their champions. Five from RNG were forced on death timer and forced to watch as SKT barrelled down mid and smashed their Nexus. This match wasn't expected to be much, but a long, bloody, exciting game unfolded for viewers between FNC and CG. After a hell of a slugfest, FNC did snag the win. Their early game was pretty good, as both teams met in the bottom lane for a level one all-out brawl, but FNC secured the first two kills of the game essentially for free. But the game soon devolved in chaos as fights occurred all across the map. CG was able to primarily find picks, while FNC was stronger as a group early on.

There were a couple of fights that went in CG's favor in the mid-game, but FNC had the more impactful fights. A 24-minute team fight went three-for-one in favor of FNC, which allowed them their first Baron buff. But this was only the first of many. CG fought tooth and nail to keep themselves in the game, and because the game was so chaotic, both teams ended up taking additional Baron buffs and FNC even got two Elder Dragons. At 47 minutes though it all came to a head. FNC was sieging CG's base, but then Lira and Damonte appeared in the top lane, far away from their own base! They went for a crazy plan, trying to backdoor FNC's base, but they never even got close to the base before FNC swiftly smashed through CG's weak defenses and their Nexus.

Bwipo's confused look at the end of the game summarized the ending the best. 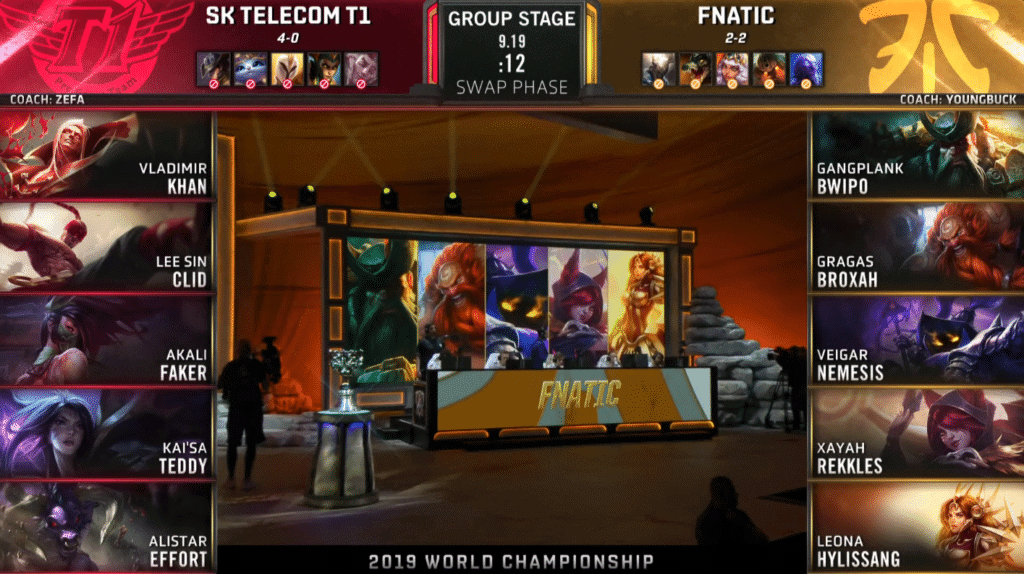 This was a pivotal game for the future of the group, and the result reflected this. In this third game of the day, FNC pulled off an exceptionally clean upset over SKT. Clid did help his bottom lane get two kills, one of which was First Blood, in the opening minutes, but then SKT made critical mistakes. At 10 minutes, multiple SKT members dove deep under the two mid lane towers. Unfortunately for them, FNC quickly collapsed and punished them, killing two with no losses of their own. Next, SKT tried to fight at Rift Herald, and though they got the buff, they lost three members to FNC.

With this lead, FNC was unstoppable. Faker tried to dive Nemesis' Veigar, but was solo killed in the attempt. They pushed their leads with a number of tower takes, which led to the 19-minute play. Here, FNC picked off Faker, Effort and Clid before taking two top towers. A minute later, FNC killed Effort again and secured an easy Baron. SKT's middle Inhibitor was destroyed on the first push, and after catching Teddy out of position, FNC knocked down the top and bottom Inhibitors too. It was hopeless for SKT now, and all FNC had to do was play out one more team fight to kill four SKT champions and claim their Nexus. In the fourth match of the day, RNG pulled off an exciting comeback win over CG. That's right, CG was ahead even against Chinese powerhouse RNG, but RNG team fighting proved too much for the NA squad to handle. Lira started off their strong early game by ganking Langx and giving First Blood over to Huni. Next, RNG managed to win a bot fight two-for-one, but CG won a top lane skirmish two-for-zero. The next few minutes weren't as explosive, but both teams traded towers across the map.

All of a sudden though, RNG came up huge in a mid lane team fight and killed two from CG in a flash. But they couldn't translate this to a significant advantage, instead falling victim to multiple CG picks.RNG had to backpedal and try to stabilize but CG kept up the pressure, constantly catching out members to obtain smaller advantages. But despite these small advantages, at 26 minutes RNG rushed the Baron and secured it before CG even saw them do it. Afterward, RNG convincingly won a team fight mid four-for-zero which got them the top Inhibitor. They backed and regrouped mid, where another 5v5 broke out. Langx's Aatrox was massive here, Flashing on multiple CG champions to do a ton of damage. When the smoke cleared, CG was Ace'd and RNG freely pushed into their base and demolished their Nexus. Sadly, CG lost their sixth game in a row, this one at the hands of titans SKT. The Koreans put on a clinic for CG, getting an early game lead and snowballing it efficiently. Clid claimed First Blood when he ganked Damonte mid and another 300 gold from a top lane gank a minute later. SKT then slew a Cloud Dragon and gained the First Tower bonus when CG went top to take the Herald. CG then went to the Infernal Dragon, and though they got it, CG lost two members in the process. As a result, SKT continued to push further ahead of their opponents.

SKT began to bleed CG out of everything, sweeping their vision and knocking down their towers as they pushed their battle line forward. Then out of nowhere CG pushed through their lines and rushed the Baron. Again, they secured the objective but lost multiple champions' lives for it, four in total. This did stall out the game, but only temporarily. At 30 minutes, CG tried once again to rush the Baron, but this time Clid Smite stole it and his team traded up three-for-one in kills. CG's structures fell as if hit by a vicious storm, and two Inhibitors were destroyed quickly. To close out the game, all SKT needed was one last winning fight. They Ace'd CG, smashed their Nexus and sent them home winless in the Group Stage. Finally, we come to the historic rivalry match between FNC and RNG. This single game separates these two teams from life or death in the tournament, as it decided who moves on to Quarterfinals and who goes home. In the end, FNC made history by defeating RNG in an epic game. Their early game with Broxah at the helm was fantastic. He got First Blood on Ming in a bottom lane gank, then assisted his team in a bottom lane team fight that went three-for-one in FNC's favor. They were off to a strong start and wouldn't be routed be thwarted by anything.

That was more than apparent at 21 minutes, as FNC rushed the Baron (with two Mountain Dragon buffs) and secured it before RNG could contest. After taking an Infernal Dragon, FNC demolished a handful of towers, but couldn't quite crack the base. The Baron wore off and FNC slew their second Infernal, which made it even easier for FNC to melt their second Baron at 29 minutes. They immediately leveraged this advantage, pushing over two Inhibitors straight away before resetting and looking bottom. Here, the final team fight unfolded as RNG felt the pressure, but unfortunately for them, FNC could not be stopped. They killed three from RNG and stopped their tournament run with one last Nexus kill.