The final stages of the League of Legends World Championship Group Stage are upon us. Yesterday, Group B decided their victors and today Group A followed suit. G2 Esports, Team Griffin, Cloud9 and Hong Kong Attitude fought valiantly to move on to the Quarterfinals. But in the end, only two could advance. The first game of the day was crucial for C9 to keep their Quarterfinal hopes in their own hands. Unfortunately, GRF ripped this hope right out of their hands and crushed it underfoot. They started it off by three-man diving Nisqy to kill him for First Blood. Next, GRF won a 2v2 in the top lane to get Sword's first kill. The game quickly snowballed away from C9 as Sword solo killed Licorice and GRF took both an Infernal Dragon and four-for-zero team fight victory in the top lane.After that fight, GRF secured the Rift Herald and used it to take the First Tower bonus mid.

The single good play came out for C9 at 16 minutes, when they picked off and killed Tarzan, but when they went top to try and get a tower they lost three more members. At this point, GRF was miles ahead and could do anything they wanted. C9 tried desperately to fight their way back in, but when they engaged at 20 minutes, GRF clean Ace'd C9 and snagged a free Baron. GRF pushed three lanes with the buff until C9 made one last attempt at fighting top. Again, C9 was Ace'd which allowed GRF to easily push on and claim their Nexus. The second match of the day was similar to the first; very one-sided. Despite having some signs of life in the early game, HKA was decimated by G2. Crash ganked top to get First Blood onto Wunder, which set his team up to continue to bully the G2 top laner. Though he ended up giving over some other advantages, his team smurfed on HKA. Jankos was hyperactive, showing up near the middle and bottom lanes to gank and force skirmishes for his team. He was massive and slaughtered a number of champions himself.

Caps was another member in the spotlight, as he hard farmed and took on the ahead Aatrox in the side lane. This matchup was clearly Caps-favored, as he dove 3z under his top lane tower and solo killed him. During this time, G2 continued to skirmish and fight, killing HKA members left and right in their typical G2 style. At 23 minutes, another fight broke out around the top lane and G2 killed two. This gave them the opportunity to secure the Baron buff. HKA's structures fell swiftly under the weight of G2's empowered minions and they destroyed two Inhibitors by 29 minutes. At this time, G2 pushed their advantage once more, jumping onto HKA. HKA was too weak to fight back and were Ace'd before G2 went on and blasted their Nexus. Another game, another dominant victory for GRF. GRF played exceptionally well, and with another great win, the hype continued to build for their match versus G2. But to focus on this game, HKA did again show some weak signs of life early on. In fact, 3z's Gangplank was able to 1v2 Sword and Tarzan in a gank to pick up First Blood and a Double Kill without even trading his life. But GRF soon put the pedal to the metal as they picked off Crash and took the first Infernal of the game.

Though HKA was able to get the Herald and use it to grab some plates, GRF was focused on the second Infernal Dragon. As such, they engaged a team fight near the objective, picked off a kill and secured the extra damage buff. From here, it looked clean from GRF as they moved around the map and killed off HKA members left and right. At 20 minutes they won a team fight four-for-zero, and at 26 minutes, GRF rushed the Baron while Viper and Lehends zoned HKA. They took the Baron and three HKA lives before also knocking down three towers and an Inhibitor. Soon, all of HKA's Inhibitors fell as GRF pushed on, pushed HKA into their Fountain and pushed their Nexus down. The trend of overwhelming power from the group's top two teams continued as G2 obliterated C9. It wasn't without its flaws though. G2 secured a massive early lead through a top side skirmish but allowed C9 to win some key fights. G2 made Licorice's life hell with Wunder solo killing him and Jankos ganking him multiple times. But C9 was able to play around the bottom side successfully, with a great fight coming out of C9 at 10 minutes to get two-for-zero kills.

The game became quite hectic at this point. G2 continued to get kills across the map, but C9 usually had a slight edge in the larger team fights despite being down in gold. At 20 minutes, C9 won a fight two-for-zero again and even attempted to take the Baron, but were stopped. As a result, G2 could take the Baron, which they did four minutes later. Though G2 destroyed all three Inhibitors, messy play from G2 allowed C9 to hang on by a thread. Because of this, G2 had to take a second Baron before pushing into C9's base. Finally, G2 finished off C9 with an Ace and a Nexus kill. 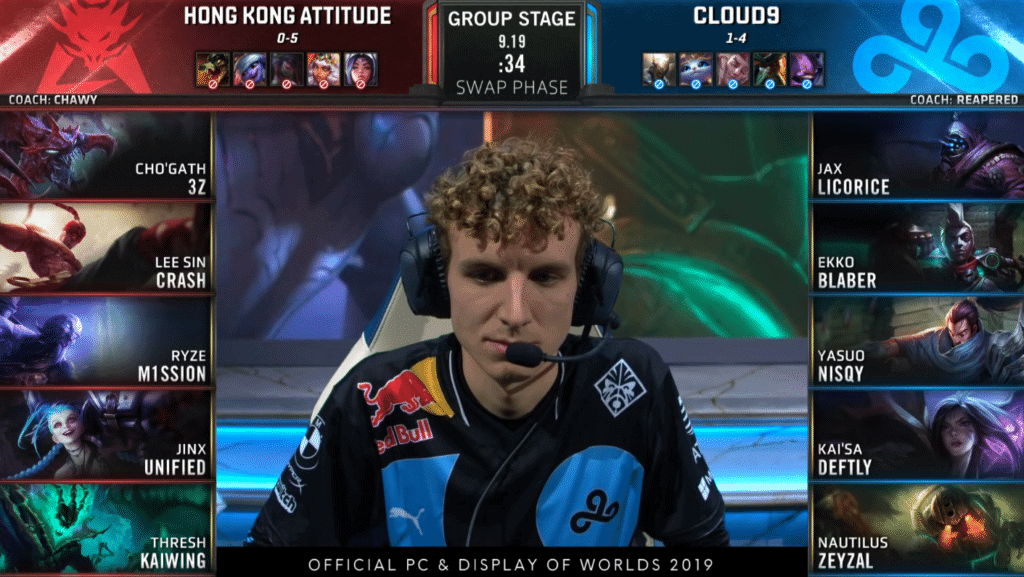 This was a match that didn't mean much, but C9 at least went home on a strong note with an exciting win over HKA. C9 started off with a strong early game too, though Crash did get First Blood on Zeyzal in a bot lane gank. C9 responded to this by diving and killing M1ssion mid before taking an Infernal Dragon and Crash's life when he tried to steal. Next, C9 won a team fight for the Rift Herald three-for-zero and secured the Eye, but did lose two members on the retreat. The Herald gave them enough juice to further their lead with the First Tower bonus in the mid lane too.

But then HKA made moves to claw their way back in. They traded towers across the map then chunked out Blaber when he overextended. Though he almost got away, a perfect Jinx ultimate rocket picked him off from far away! HKA saw this as a huge opportunity and immediately rushed the Baron, which they did claim without contest. They grouped and pushed the middle lane and actually won two back-to-back fights. Because of this, C9 lost three towers and the middle Inhibitors for these mistakes. But they wouldn't be put down easily and met once more in the mid lane at 27 minutes. This time C9 demolished HKA, killing all five members and pushing on to knock down their base and Nexus. Finally, the match that everyone was waiting for. Although these teams were already locked in for Quarterfinals, this match was GRF's opportunity to challenge G2 for the first seed of the group. They certainly did and won versus them in convincing fashion. GRF got a lead early by killing Jankos twice, giving Tarzan First Blood and an additional kill's worth of gold. A few minutes later, G2 tried to pick a fight in the top lane, but GRF outperformed them to get two kills and the First Tower bonus there.

G2 tried to force their way back into the game, as they typically do from behind, but GRF didn't budge an inch. When they tried to take a bottom tower, GRF collapsed and killed two. When they tried to engage on them in the top lane, GRF outplayed G2 and killed all five of their members. With this, GRF freely secured the Baron Nashor. After winning yet another team fight in the middle lane three-for-zero, GRF easily knocked down the middle and bottom Inhibitors. The last Inhibitor was in GRF's eyes, so they went top and began their siege. Instead of playing it slow, GRF dove into G2's base and smashed G2, killing three members before rampaging through their base and claiming their Nexus. This game resulted in both teams ending the group stage with a 5-1 record, so a tiebreaker match was played right after. This match was for all the marbles, and GRF showed just how strong they were in their fourth extremely dominant game of the day. Like in the previous match, G2 seemed to have no answers for what GRF did. Tarzan found First Blood again, this time on Mikyx this time, to propel himself to another early lead. After that, GRF assassinated Jankos in his own jungle, then dove bot to grab another kill. Next, GRF moved top and found another kill onto Wunder. The game quickly slipped away from G2.

GRF continued the aggression, finding more kills and neutral objectives like the Rift Herald, which helped them take the First Tower bonus. But then they grouped up to utilize their Ornn ultimate. This was huge, as it set GRF up to force team fights, where they killed more and more from G2. They crushed three team fights in a row, and after the third, managed to secure Baron Nashor. Equipped with the major buff, GRF picked off one G2 member, knocked down multiple towers and destroyed an Inhibitor. At 27 minutes, GRF decided to siege top. The towers fell and then GRF dove into G2's base. They slaughtered the desperate G2 members one by one. All five from G2 were on death timer as GRF obliterated their second Nexus in a row.