Check out the results from DreamHack’s November NA East tournament!

Fifty of the world’s best Fortnite tandems made it to the Grand Finals of DreamHack’s first-ever NA East duos event. Many regions partook in the competition, including European players, who set out to showcase their superior ability against their NA East rivals. North American duos stood for the pride and reputation of their region. Thousands of teams registered for the open portion, which narrowed down to the top 500 duos. From there, only 50 would region the Grand Finals to decide the winners of $15K USD.

Six matches stood between the finalists and Fortnite supremacy. Some massive names reached the final stage of the DreamHack Online Duos Open, such as Clix & Bizzle, Zayt & Saf and TaySon & Th0masHD. However, only one duo could win. Let’s see how the NA East DreamHack competition played out.

Shark and Knight steal the victory

The dominant XSET Gaming duo of RogueShark and Knight walked away as DreamHack Champions after six intense Fortnite matches. Despite the leaderboard narrowing late, Shark and Knight were able to seal the victory with a clutch three elimination third-place finish in the closing match. The two players combined for 25 eliminations, one Victory Royale and 338 points overall. It was quite the performance out of a duo that finished the duos Fortnite Champion Series in third-place. Shark and Knight picked up where they left off, walking away with $16K USD to split.

Top Duos in the hunt 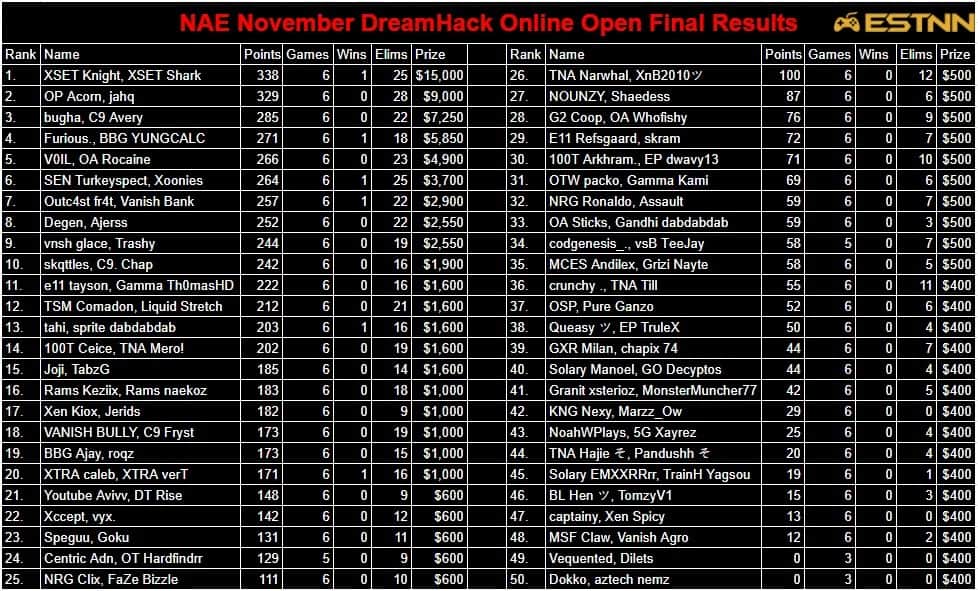 Acorn and jahq held the lead going into the final match but fell far too early in the last game. They ended with 239 points with 28 eliminations and no Victory Royales. Still, Acorn and jahq reminded everyone that they are one of the most formidable duos in the NA East region. The two players secured $9K USD for their efforts. Fortnite World Cup Champion Bugha and C9 Avery rounded out the top-three with 285 points, significantly short of the two teams who broke the 300-point mark. Nevertheless, Bugha and Avery added over $3K USD to their career earnings.

Also Read: How to Win a Brand New BenQ Monitor

With a handful of European teams making it into the NA East Grand Finals, some exciting story lines developed. First and foremost, several players took to Twitter yet again to discuss which region is superior. This argument stems from EU successes in NA East competitions and not vice-versa. The European duo of TaySon and Th0masHD finished 11th after six matches, and several others were not too far behind. Even some stream sniping accusations surfaced between the pair of Clix & Bizzle against Milan & Chapix.

Some suspect footage surfaced on Bizzle's stream, where European players Chapix and Milan were lurking in the shadows of Sweaty Sands. Both players sat behind a tree, waiting for Clix and Bizzle to rotate out and attacked them, which completely ruined their game. The EU versus NA discussion rages on as the two regions met yet again in an online tournament. Hopefully, another Fortnite World Cup will take place to settle these disputes correctly.

NA West will round out the DreamHack's first attempt at duo competitions. Be sure to tune in on November 19 when the next tournament begins!