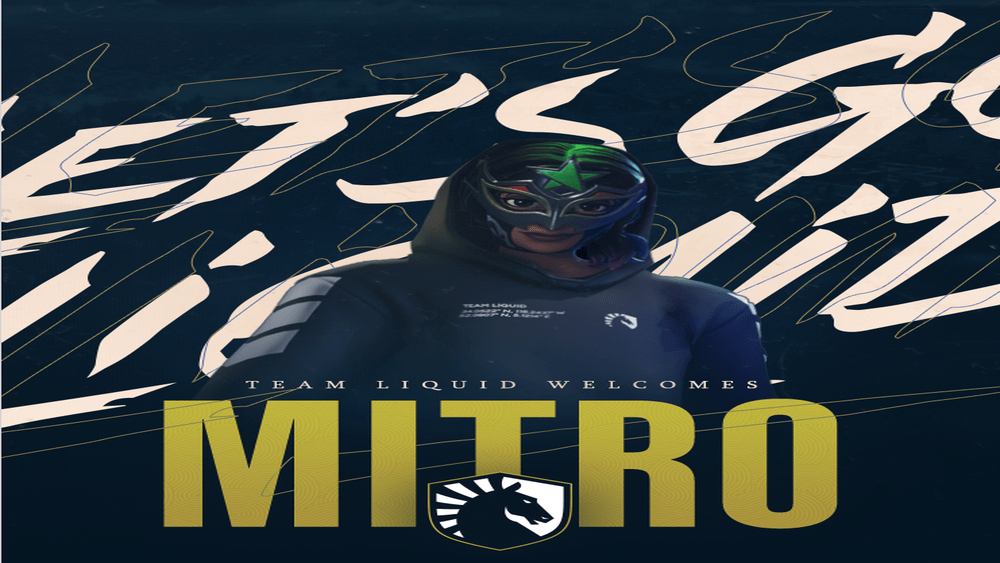 Many players and personalities regard Dmitri "mitr0" Van de Vrie one of the best Fortnite players in the world. Hailing from the dominant European scene, this 17-year-old Dutchman has competed at the height of Fortnite's competitive scene since 2018. After acknowledging an unfair agreement between himself and his former organization, Team Atlantis, they released mitr0 from his contract. Many months have passed since then, and mitr0 now has a new home alongside one of the deepest roster

Team Liquid is an esports organization that sports teams in many different titles, including League of Legends, Rainbow Six: Siege, DOTA 2, Counter-Strike: Global Offensive and many others. With their headquarters located in the Netherlands, it seems fitting that Team Liquid would acquire one of the hottest free agents in competitive Fortnite. Liquid's announcement fades in with mitr0's signature Dynamo Fortnite skin draped in a Team Liquid hoodie. The video then continues with some of mitr0's most outstanding clips over his illustrious competitive career. The organization's official statement gives insight into the thought process behind acquiring mitr0:

"We're very excited to announce another addition to our Fortnite roster. Many of you will know him for his dominant online performances across 2019, and stellar duos showing at the Fortnite World Cup. We're pleased to announce that Mitr0 has officially joined Team Liquid. Mitr0 has been one of the best Fortnite players in the world for the entirety of its competitive lifespan and has also shown himself to be one of the most creative players in the scene. We look forward to watching him continue to improve through 2020 and can't wait to see the crazy plays he comes up with."

It was only a matter of time before mitr0 found a home within a reputable organization. Team Liquid's current Fortnite roster features some notable names and personalities, mitr0 is yet another excellent addition to their team. This signing marks Team Liquid's first since the beginning of 2020. The Dutch esports organization signed rising star, Stretch, back in October of 2019.

Team Liquid's Fortnite Manager, Kory Arruda, offered up a comment of his own on the signing of mitr0:

"Since Fortnite competitions started, Mitr0 has always been considered one of the best players in the game. The second I heard he was a Free Agent I knew I had to reach out immediately to get to know him more and it's been nothing but an absolute pleasure. I'm extremely excited to be able to support Mitr0 and to have him represent Team Liquid."

In addition to the exciting news release, Team Liquid had mitr0 field some questions regarding his history, current status and future. When asked what mitr0's goals are for 2020, he responded saying, "My goal for 2020 is to be at least top 3 in the Power rankings and just do good in every event doesn't matter what game mode." Another question posed to mitr0 asked him what his favorite moment is in Fortnite, to which mitr0 responded with "the shockwave play I did in one of the solo skirmish weeks, I think everyone knows this moment." The shockwave clip above is one of the most famous in all of competitive Fortnite.

The excitement of signing mitr0 cannot be overstated solely because of his accomplishments. Amongst a bevy of unbelievable clips, mitr0's created quite a career for himself over the last two years. Some of his career highlights include several tournament victories alongside his former duos partner, Kyle "Mongraal" Jackson. Mitr0 and Mongraal took sixth at the Fortnite World Cup and then added Benjy "benjyfishy" Fish to complete their trio during the Fortnite Champion Series.

The trio commonly referred to as MMB dominated nearly every week of the Season X FNCS competition en route to a tenth place finish in finals. Mitr0 also performs exceptionally well as a solo with multiple high placements in the weekly Solo Cash Cups. Most recently, mitr0 partnered up with another European player by the name of crr. These two accomplished a third and fourth-place finish during the Winter Royale 2019.

Mitr0's skills are undeniable, and he now has a massive platform and fanbase with Team Liquid to further cement himself as one of the best Fortnite players in the world. Hopefully, we will see mitr0 streaming much more in the future while sporting the Team Liquid brand.