Fortnite’s collaboration with Marshmello dates back to 2019 when the American DJ and music producer became the first member of the ICON Series. Not many players knew what the ICON Series could become afterward. The next three years saw celebrities such as LeBron James, Neymar Jr., Ariana Grande, Travis Scott and even content creators such as Tyler “Ninja” Blevins and Lachlan “Lachlan” Power join the exclusive group. However, Marshmello was the first, and he’s been prevalent in Fortnite following the initial collaboration three years ago.

Since his debut, Marshemello appeared in multiple Fortnite events, including a performance at the World Cup in 2019. His cosmetic outfit recently received a new black and gold design. It seemed that the collaboration would go quiet until Marshmello returned to the Item Shop, which occurred sooner than expected.

Today, Epic Games revealed a slew of new Marshmello-themed cosmetics in what they call the “Melloverse.” We have all the information regarding the latest Fortnite x Marshmello crossover.

Epic Games dropped a sudden blog post today regarding the next edition of Fortnite x Marshmello. The game debuted three new skins and multiple other cosmetic items via the Item Shop.

Here’s a complete list of cosmetics that are now available in Fortnite’s Item Shop: 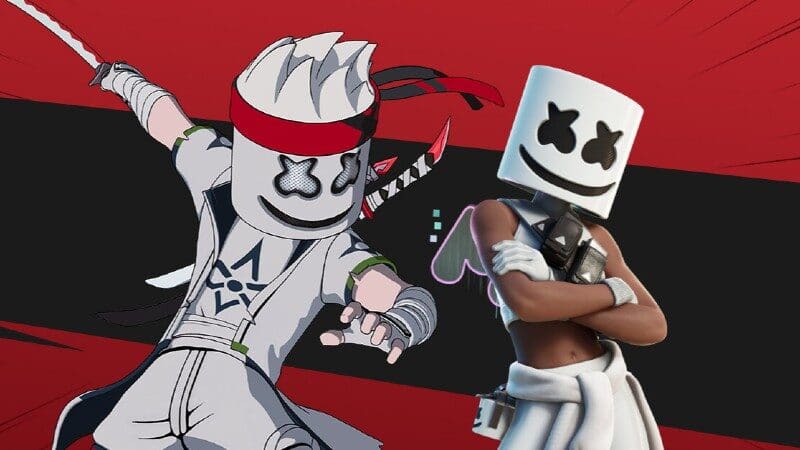 Marshmello’s original outfit and cosmetics are also purchasable as of 7 PM EST this evening.

Vote on the Next Marshmello Lobby Track

The Melloverse extends beyond skins; Epic Games also announced a vote that fans can participate in to decide the next Marshemllo Lobby Track. The songs – BeFoRe U and ReMiNiSce – debuted on the artist’s latest album – Joytime IV. Fans looking to participate in the Lobby Track voting should head to this website. Once there, select one of the two tracks and submit the vote below.

We expect to see the Marshmello skins stick around for a few days as per usual. New crossovers tend to last beyond just the daily Item Shop rotation. While unexpected, it’s safe to say the ongoing collaboration between Fortnite and Marshmello is far from over.

The artist released a new line of Fortnite x Marshmello gear available via Amazon. It’ll be interesting to see where this partnership goes three years following its inception.