ESTNN helps you gear up for the FNCS Semi-Finals!

Competitive Fortnite players worldwide have entered the home stretch in this season’s Fortnite Champion Series (FNCS). Thousands of competitors battled through three weekly qualifiers with hopes of either securing a position in the Season 6 Finals or qualifying for the Semi-Finals. Only a handful of teams earned the right to bypass the Semi-Finals, meaning the vast majority will have to endure six matches against their region’s best teams this weekend.

Today, we will briefly revisit the format and explain how competitive Fortnite fans can watch the FNCS action this weekend. It promises to deliver on all levels of excitement as we prepare to crown seven more champions, all of whom will earn themselves a share of $3M USD and the coveted Axe of Champions. 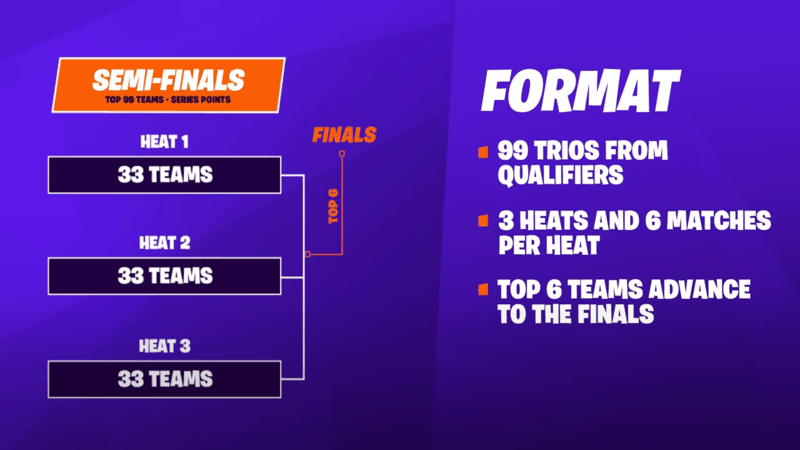 All regions feature 99 teams that qualified for the FNCS Semi-Finals through accumulated Series Points. Those teams broke into three heats, and each will compete in six matches. The magic number is six, as in, trios need to place top-six to qualify for the Season 6 Finals.

Those who don’t qualify need to finish between 7th and 17th to qualify for the Reboot Round. Trios that fall outside of the top-17 walk away empty-handed and will have to refocus for the next Fortnite Champion Series. 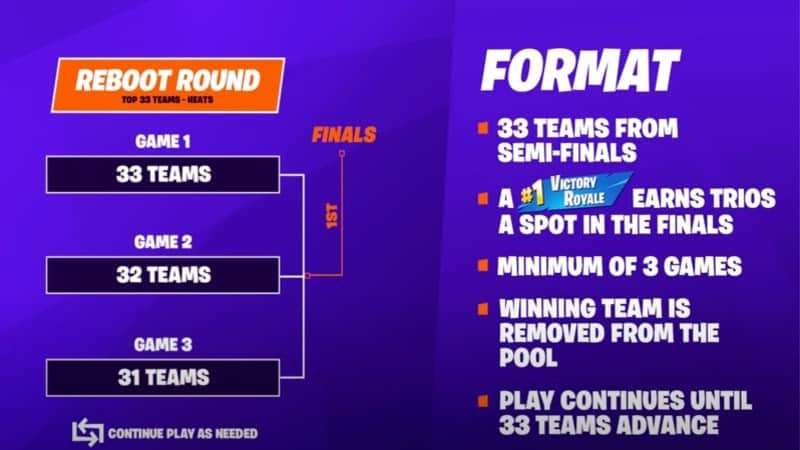 Epic Games changed the Reboot Round structure from last season. Previously, the Reboot Round was one match, and only the winning team would secure the final spot in the FNCS Finals. This time, all teams who finish between 7th and 17th in their respective heat will combine into one lobby.

Those 33 teams will then compete in three Reboot Round matches. Like before, all that matters is earning a Victory Royale. Once a team secures the win, they will qualify for the Season 6 Finals and exit the Reboot Round. That process repeats until three different teams win in NA East, Europe, Oceania and Asia. Epic recently announced that four teams will advance from NA West, the Middle East and Brazil.

Now, let’s take a look at the schedule for this weekend’s festivities. The competition begins with the Middle East on Friday and concludes with the NA West on Sunday. Refer below for the entire schedule, all of which are in Eastern Standard Time (EST).

Where & How to Watch

This season, Epic Games provides a broadcast for the major regions, including Europe, NA East, NA West and Brazil. Each offers a mixture of casters and analysts, which remains the same for the FNCS Semi-Finals and Reboot Round. Based on the broadcast schedule from earlier this season, Heats B and C of each region will appear in the official stream.

Epic did not post a schedule for the weekend, but we know for sure that there will be a broadcast for the FNCS Semi-Finals and Reboot Round. Countless players across the seven server regions will also stream their points of view. The best way to locate those is by navigating to the Twitch website and checking the Fortnite category for “FNCS” in the title.

Here are the official stream links:

Twitch Drops are back! Tune in to any supported channel this FNCS to receive Twitch Drops. Be sure to link your Epic and Twitch accounts within 14 days of claiming your Drop reward to be processed: https://t.co/zrYWqry2At pic.twitter.com/Lzw35lsXKf

Don’t forget, Twitch Drops are back in play for FNCS Chapter 2 – Season 6. Viewers can earn themselves some official Fortnite Champion Series cosmetics by merely turning on a stream with “Drops Enabled” in the title. Check out our recent article, where we detail the process in-depth.

The quest for the Axe of Champions starts now. Be sure to tune into the action throughout the weekend as we approach the final two weeks of competitive Fortnite in Chapter 2 – Season 6!