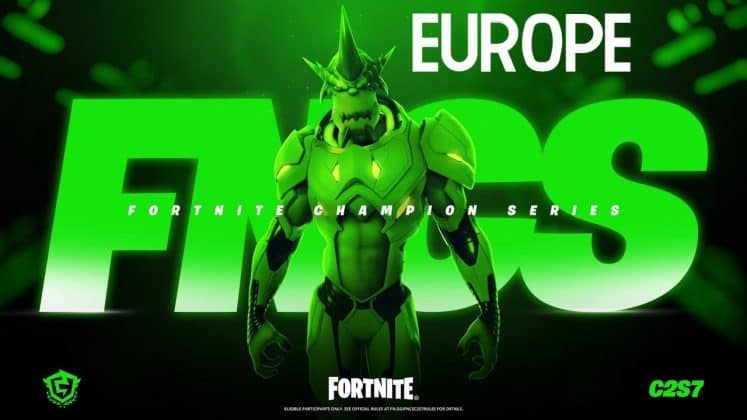 The Fortnite Champion Series (FNCS) in Chapter 2 – Season 7 concludes this weekend with the Season Finals. Teams will go to war for 12 matches across two days for a shot at the $3M USD prize pool and the Axe of Champions. Storylines and conflicts have developed throughout the season, but few are as intriguing as what the European region offers.

Fortnite’s European region not only possesses the most significant prize pool but arguably the best talent pool from top to bottom. Players such as MrSavage, benjyfishy, aqua, Vadeal, TaySon and Noahreyli are all here, and they all have their sights set on Fortnite’s elusive Axe of Champions. Another season of trios further solidified many of these teams as the best. However, only one can call themselves FNCS Champions.

Yesterday, we covered the NA East Finals, and we'll do the same for Europe today. Join ESTNN as we revisit the format and look at some of the favorites, dark horses and teams that will be contested off the spawn. Before we get there, here is the Season 7 Finals format, prize pool and schedule:

The Drop Map (subject to change) 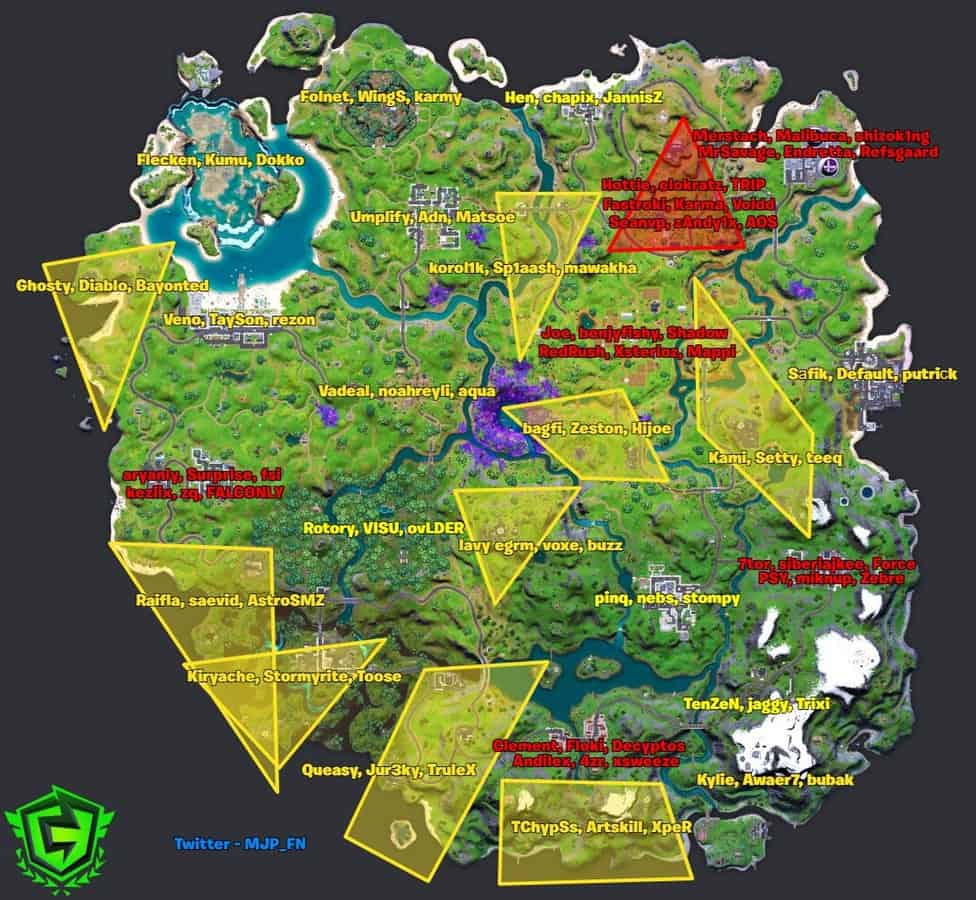 Three-time FNCS Champion TaySon made a bold move this season when he decided to move on from former teammates nayte and 4zr, with whom he finished third in the Season 6 Finals. Many questioned the decision, but how can anyone question arguably the best player in the world? TaySon proved his skeptics wrong not long after choosing to team with Rezon ay and rising star Veno. What’s unfolded over the last few months is nothing short of spectacular.

TaySon, Veno and Rezon have won two Trio Cash Cups and the most recent DreamHack Cash Cup Extra. With an uncontested Believer Beach drop, it seems that TaySon is on his way to another Axe of Champions. There are other talented teams in the field, but this is TaySon, Veno and Rezon’s FNCS to lose.

you guys know the drill 12/12 pic.twitter.com/rb2Af0aALM

While TaySon and company have dominated this season, it’s impossible to ignore Season 5 Champions Hen, JannisZ and chapix. It may seem they’ve been quiet this season, but that assessment is incorrect. Hen’s trio earned two Trio Cash Cup wins this season and has not lost a step. Their eighth-place finish in Chapter 2 – Season 6 might seem concerning, but that resulted despite fighting a team consistently off the spawn at Craggy Cliffs.

However, that won’t be the case in the Season 7 Finals for Hen, JannisZ and chapix. As of right now, they’ll glide into Craggy Cliffs alone with no problematic fights off the rip. We’ve seen what this team is capable of under these circumstances, and it could result in their second Axe of Champions in three seasons.

Duo Fortnite World Cup and Season X Champion aqua is back with perhaps the most intriguing redemption story of Chapter 2 – Season 7. The Austrian player has struggled recently with hand pains, causing him to miss most of Chapter 2 – Season 5. Aqua missed out on the Season 4 and Season 6 Finals as well due to various reasons. Despite the hardships, aqua returns to the FNCS Finals once again with two of the region’s best players—Vadeal and noahreyli.

Aqua, Vadeal and noahreyli have put together seven top-ten finishes in various tournaments. This trio will claim Boney Burbs as their drop, and there are no immediate threats to contest them. Aqua has tasted FNCS gold before and could very well win another with arguably the two most impressive fighters in Europe. If that happens, it’ll be quite the comeback story.

The ultra-consistent trio of Kami, Setty and teeq round out the European FNCS favorites. After narrowly missing the FNCS Season 6 Finals, this trio bounced back impressively. Their Season 7 results thus far include a 5th, 8th, 2nd, 2nd, 7th, 6th and 3rd. Despite having no tournament wins, Kami, Setty and teeq are trending in the right direction ahead of the FNCS Finals.

As most would expect, these three will occupy the Kami Split, located north of Retail Row. They currently have no company according to the updated drop spot map, so it’s a favorable position. Kami, Setty and teeq seem primed for the 12-match gauntlet that will ensue this weekend.

Last season seemed like the end of Matsoe and Umplify. They teamed with benjyfishy but ultimately failed to reach the Season 6 Finals. After TrainH Esport closed its doors, Matsoe and Umplify had all the motivation they needed to make a splash in Season 7. The two added Adn to their team late last season and have performed well.

Matsoe, Umplify and Adn won Heat B convincingly and managed some decent placements over the last few months. They should have Pleasant Park uncontested in the Grand Finals with plenty of loot and reasonable Storm Surge targets. That is a recipe for success for a trio that’s flying under the radar.

We’ve mostly covered recognizable names thus far, so let’s highlight a legitimate dark horse team that could contend for a high finish. Folnet, WingS and karmy are certainly not household names in the scene, or at least they weren’t before finding success in Heat A. This trio accumulated 187 points and triumphed over many notable European teams, securing them a spot in the finals.

Folnet, WingS and karmy have not performed to the level of their competition in Trio Cash Cups. However, Fortnite fans know that anything can happen in tournaments. While Folnet, WingS and karmy might not win the Axe of Champions, an uncontested Stealthy Stronghold gives them everything they need to make a run.

It’s bizarre to call defending European champions Queasy, Jur3ky and TruleX dark horses, but it seems the Axe of Champions hangover impacted them to some extent. These three shocked the world in Season 6 when they came out of nowhere to win Fortnite’s most coveted prize. Since then, a sixth-place finish in a Trio Cash Cup and fourth in Bugha’s Late Game Finals are their best results.

Motivation remains an essential question for Queasy, Jur3ky and TruleX as they look to defend the European throne. They will land at the Flush Factory and Hydro-16 Split, which helped win them the Axe of Champions last season. We’ll have to see how they fare against this stacked field.

100% going orchard btw, if my grands ends up like last time due to being contested then it is what it is

Three teams have penned The Orchard as their drop spot in the Season 7 Finals. Hottie, elokratz and trippernn, Seanvp, zAndy and AOS and Fastroki, Karma and Voidd will be fighting consistently off the spawn at a wide-open POI. This scenario likely won’t end well for any of the teams involved, especially considering none seem inclined to switch their location. One of the three teams may bailout, but if not, expect fireworks for 12 straight matches.

Corny Complex is a tad less complicated than The Orchard, but complicated nonetheless. Benjyfishy, Joe and Shadow have committed to Corny Complex despite the recent loot reduction in patch v17.50. Season 7 has been a much-needed revival to Benjy’s career after a tough run last season. His trio figures to battle FNCS Chapter 2 – Season 1 Champion RedRush and his teammates Xsterioz and Mappi. It’s another spawn fight that will be worth watching this weekend.

Two of Europe’s top teams will contest one another at Misty Meadows in the Season 7 Finals. First, we have the all-French trio of Andilex, xsweeze and 4zr—a team that formed mere weeks ago. They’ve won two tournaments over the last month but have a tall order in the FNCS Finals as they’ll square up against Floki, Clement and Decyptos. Floki’s team has been together since early in Season 5 and finished 12th last season. Like the previous two locations, this will be an entertaining showdown between two top teams.

Season 7 was shaping up nicely for Refsgaard, Endretta and MrSavage, but they’ll once again have to fight another team at Steamy Stacks. Merstach, Malibuca and sh1zogod qualified for the finals out of Heat C and won’t budge off of Steamy. After MrSavage’s trio finished second last season, that’ll be much more challenging with a spawn fight waiting each game.

The Season 7 Finals promise to be the best thus far since trios became the primary game mode. Be sure to tune this weekend to see who claims the Axe of Champions!