Fortnite Champion Series Chapter 2 - Season 3 qualifiers have now come to an end after the fourth and final qualifying week.

Players in all seven competitive regions endured several hours of solo matches over the last two weekends. Their ultimate goal was to reach stage two of the tournament, which many refer to as heats. Although many players will qualify through consistency points, the fourth qualifier granted those outside the bubble one final chance to guarantee themselves a seat stage two.

For Europe, NA East, NA West and Brazil, the top-50 players advanced to heats. The top-25 competitors from Oceania, Asia and Middle East accomplished that same goal. Check out results from Qualifier One, Qualifier Two and Qualifier Three to see how the first three days played out. With $5 million on the line throughout the entire FNCS, let’s see who are the final players to secure a spot in stage two. 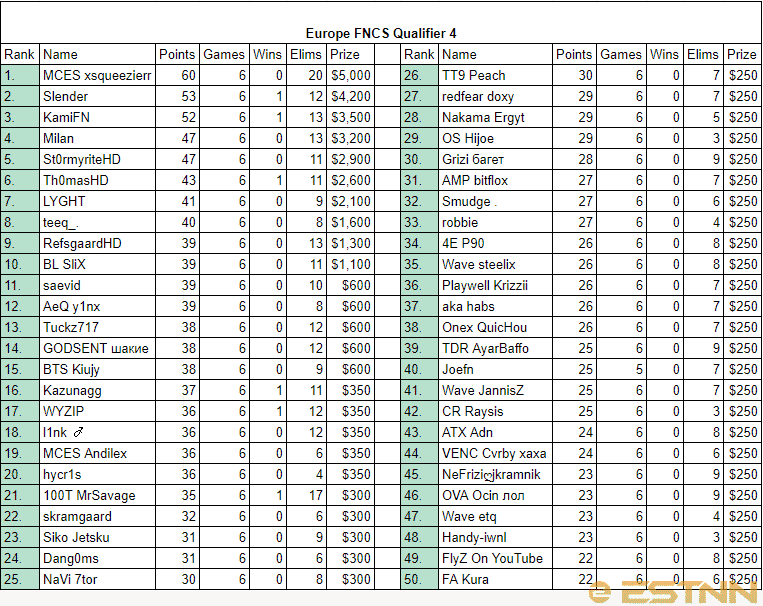 Frenchman Xsweeze of Team MCES compiled 60 points en route to his first FNCS Qualifier victory this season. He’s been trending upward for quite some time now. It was only a matter of time before Xsweeze joined the winner’s circle in Europe. He led the EU Grand Finals with 20 eliminations and took first place despite not earning a single Victory Royale. After his performance in the FNCS Invitational last season, Xsweeze will be one of the top players to watch for heading into stage two.

Portuguese player Slender finishes with 53 points in second place. He made the most of the final qualifier, managing one Victory Royale and 12 eliminations. Polish standout and two-time FNCS Finalist Kami took third place with 52 points. Some other notable players to finish the top 50 include 100T MrSavage, GODSENT wakie, Wave JannisZ and Th0masHD. 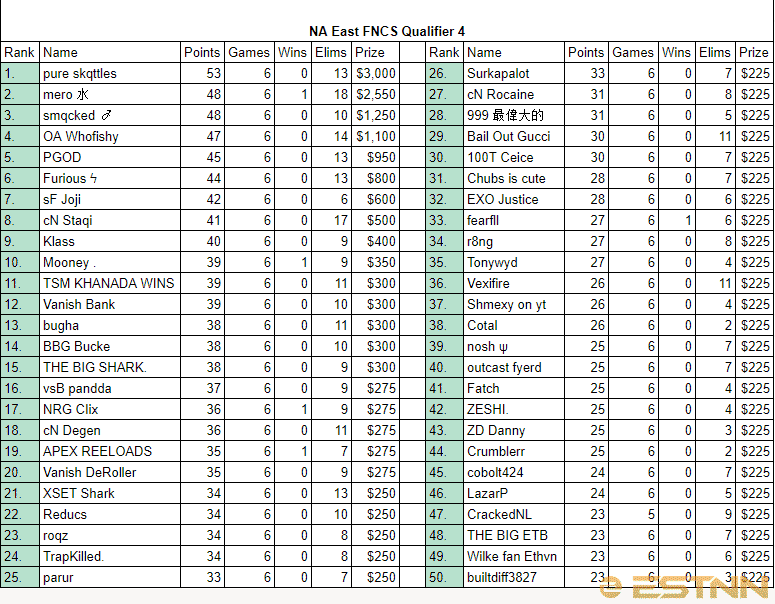 Pure skqttles won the final FNCS qualifier for NA East with 53 points. He played a somewhat consistent game, managing only 13 eliminations and no Victory Royales. Skqttles relied on placement, and it paid off to the tune of $3K USD and a spot in stage two next weekend. For those unaware of skqttles, he recently took fifth place in the DreamHack Online Open for NA West last month.

Controller player mero compiled 48 points across six matches in the last NA East Qualifier. He earned more eliminations than any other player with 18 and even grabbed himself a Victory Royale. Smqcked rounded out the top three for NA East, also with 48 points. Some other notable players present in the top-50 include TSM Khanada, Furious, Bugha, BBG Bucke, XSET Shark and NRG Clix. 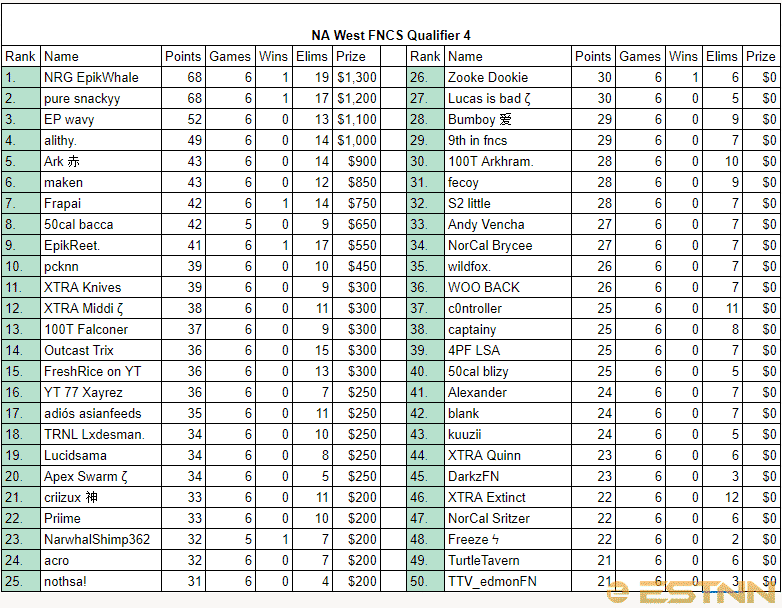 NRG EpikWhale, one of NA West’s best, took first place in the final FNCS Qualifier for his region. The Fortnite World Cup and four-time FNCS Finalist earned more eliminations than any other player in the Grand Finals with 19. He also completed a Victory Royale, reassuring all NA West viewers who the true king is outside of 100T Arkhram. EpikWhale has done more than enough to punch his ticket to heats, where he will look to continue his outstanding play. 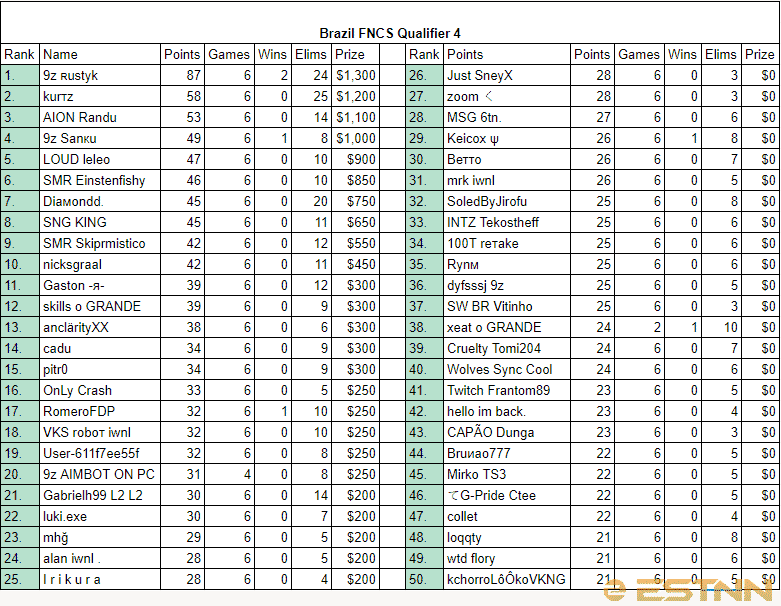 9z Rustyk went back-to-back for the first time this season in any regional FNCS Qualifier. He took first place in the third qualifier yesterday but managed to accumulate even more points in the final qualifier. Over six matches, Rustyk earned 87 points, including two Victory Royales and 24 eliminations. This young Argentinian player will be one of the favorites heading into the final weekend of competition.

Second place went to kurtz, who put up 58 points and 25 eliminations. This 15-year-old Fortnite World Cup Finalist has not lost a step. He will look to add an FNCS Championship to his track record next weekend. AION Randu took third place with 53 points overall. All 50 players shown above will participate in heats next weekend. 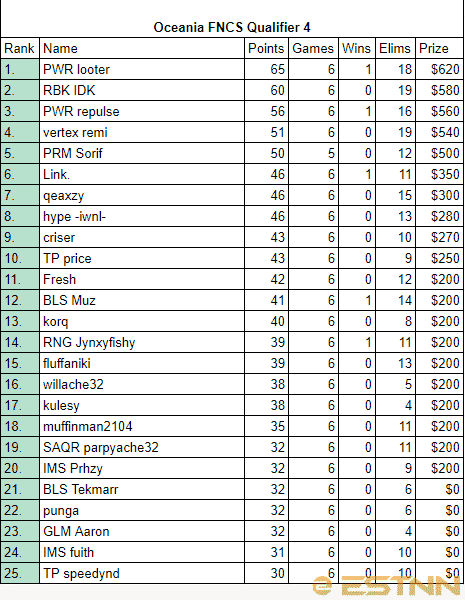 Four-time FNCS Finalist looter of the PWR organization earned hist first qualifier victory with 65 points overall. Across six matches, looter managed 18 eliminations and one Victory Royale. This qualification marks his third out of four weeks. RBK volx took second place in the final qualifier for Oceania with 60 points. He is one of the few players in OCE to qualify in all four times for stage two. RepluseGod also of Team PWR rounded out the top-three with 56 points. 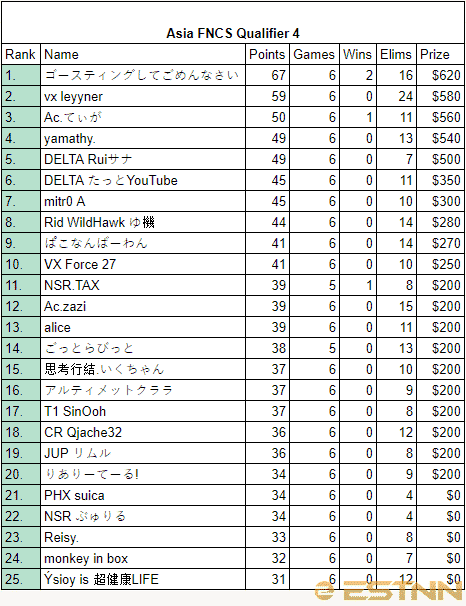 A player whose name translates to sorry for ghosting won the final Asia FNCS qualifier with 67 points. He won two out of six matches with 16 eliminations. Sorry for ghosting will join vx leyyner in stage two, who managed the most eliminations of any player with 24. The 25 players listed above will participate in heats next weekend. 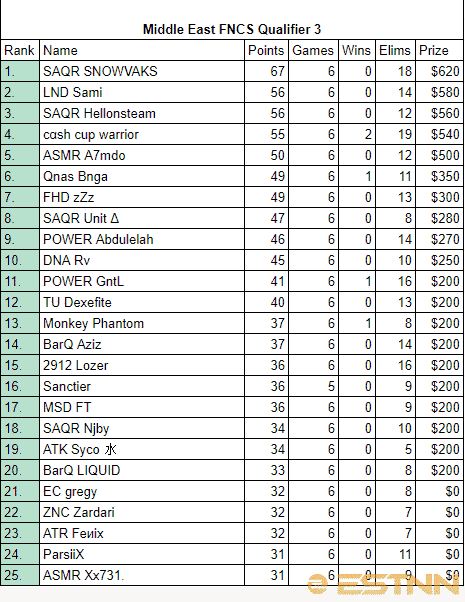 Several hundred players will participate in heats next weekend with the primary goal of reaching the Grand Finals. Stay tuned to ESTNN throughout the week for more content leading to the finale of Chapter 2 - Season 3!