This is how everything works with the Fortnite Chapter 4 Battle Pass, and all of the extra rewards coming to the game this season.

A new chapter of Fortnite has just kicked off. The Chapter 4 update brought a new map and loads of new features, but there’s also one of Fortnite’s most interesting Battle Passes we’ve seen. The Fortnite Chapter 4 Battle Pass includes some cool original skins and some icons of gaming finally making their way into the game.

The new Battle Pass has the normal 100 tiers of content. There are skins, back blings, contrails, V Bucks, and more. However, there are more drops than ever this season. There is going to be the standard Battle Pass. Gradually, we’ll get more and more bonus skins to get along with it. This season we’re even getting new midseason drops. These will be extra skins and styles that will come to the game mid-way through the Battle Pass.

We’re going to run through everything available in the Fortnite Chapter 4 Battle Pass. Along with the bonus skins, mid-season drops, and how everything is working with the Battle Pass changes this season.

The Fortnite Chapter 4 Battle Pass is continuing the Battle Stars system from Chapter 3 and earlier. This means every time you level up. You’ll unlock some stars. You can use the stars to unlock the cosmetics in the Battle Pass. To get everything, you’ll need to climb all the way up to Level 100. Although, even after that, there are bonus rewards coming to give you unique versions of skins to show off where you’ve finished.

The Battle Stars system might mean you can pick and choose which cosmetics you want, to a point. Out of each page, you don’t have to spend your Battle Stars on any specific items. Although, to unlock most skins, you’re going to need to claim everything on the page first. To unlock Bonus Rewards, you need to have claimed everything from the Battle Pass too. This might mean you can grab a skin a bit early if you save your Battle Stars. However, eventually, players have to unlock everything if they want the high-tier rewards.

To get the skin at the end of each page, you’ll need to unlock most of the rewards on that page. This means you’ll mainly have to unlock everything rather than just pick and choose what you want. There are also level barriers. Half the rewards on most pages are locked behind a minimum level going up to level 100.

These are the Fortnite Chapter 4 Battle Pass rewards, and what you need to claim to get access to each of the high-up rewards. 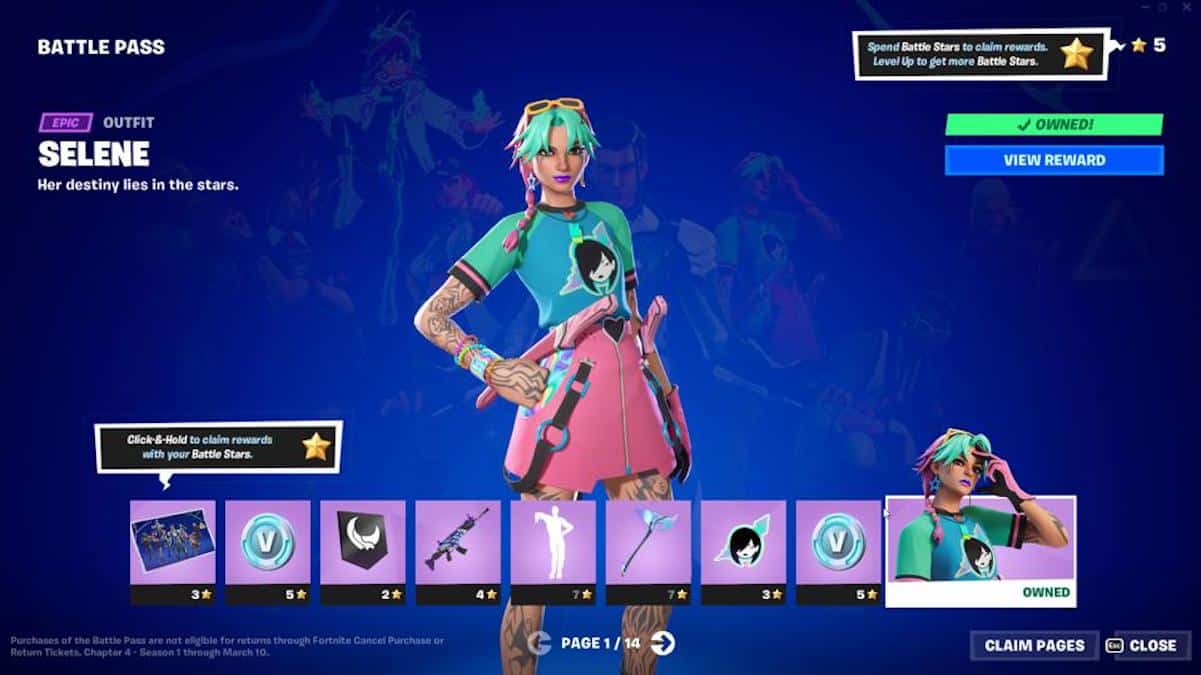 The first page of the Fortnite Chapter 4 Battle Pass is going to pass pretty quickly! This one includes some rewards that just instantly unlock, too, with no need to grind at challenges to unlock. These are all of the items you’ll get on this page. 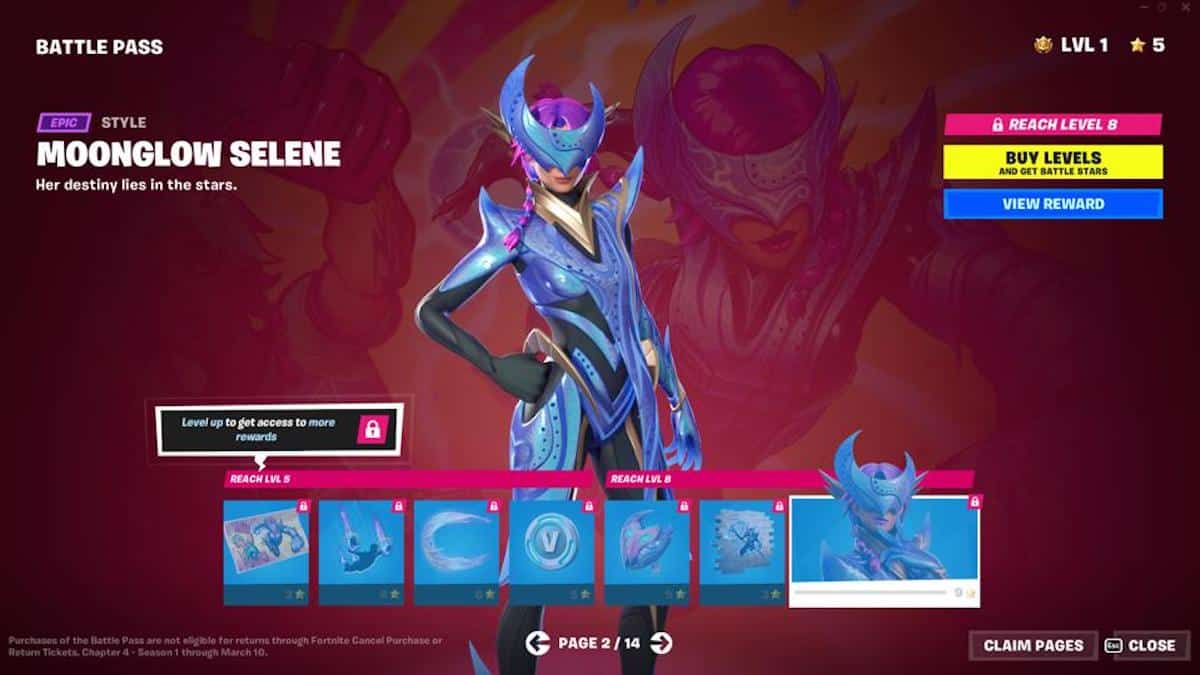 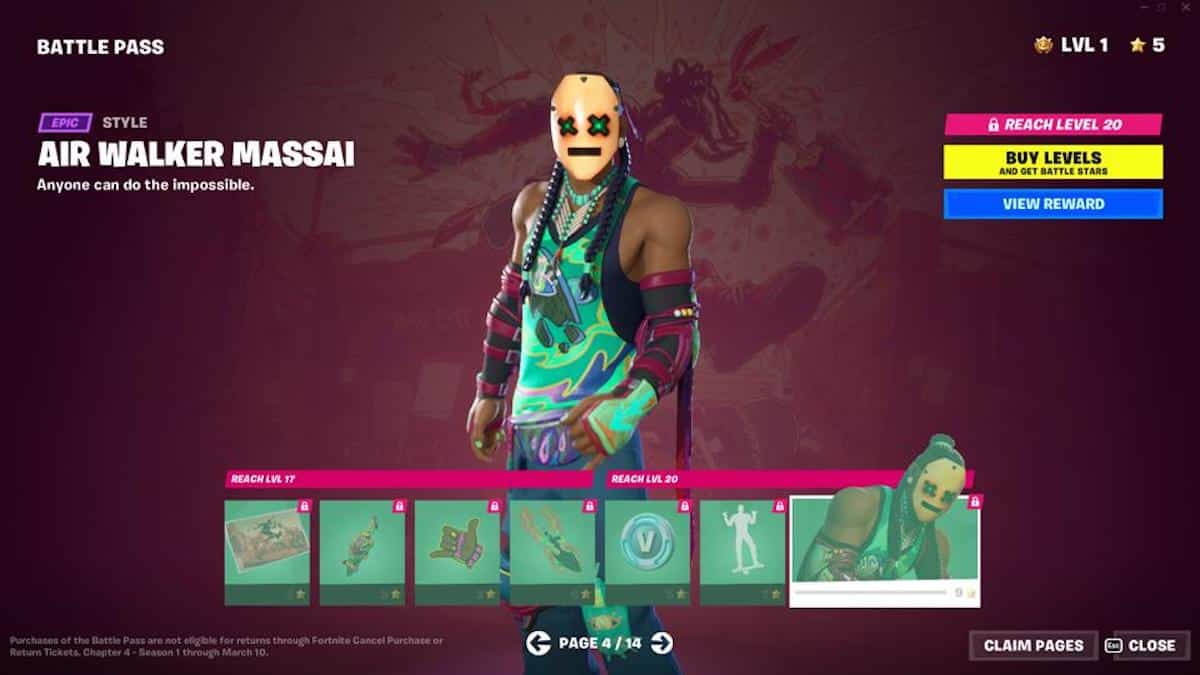 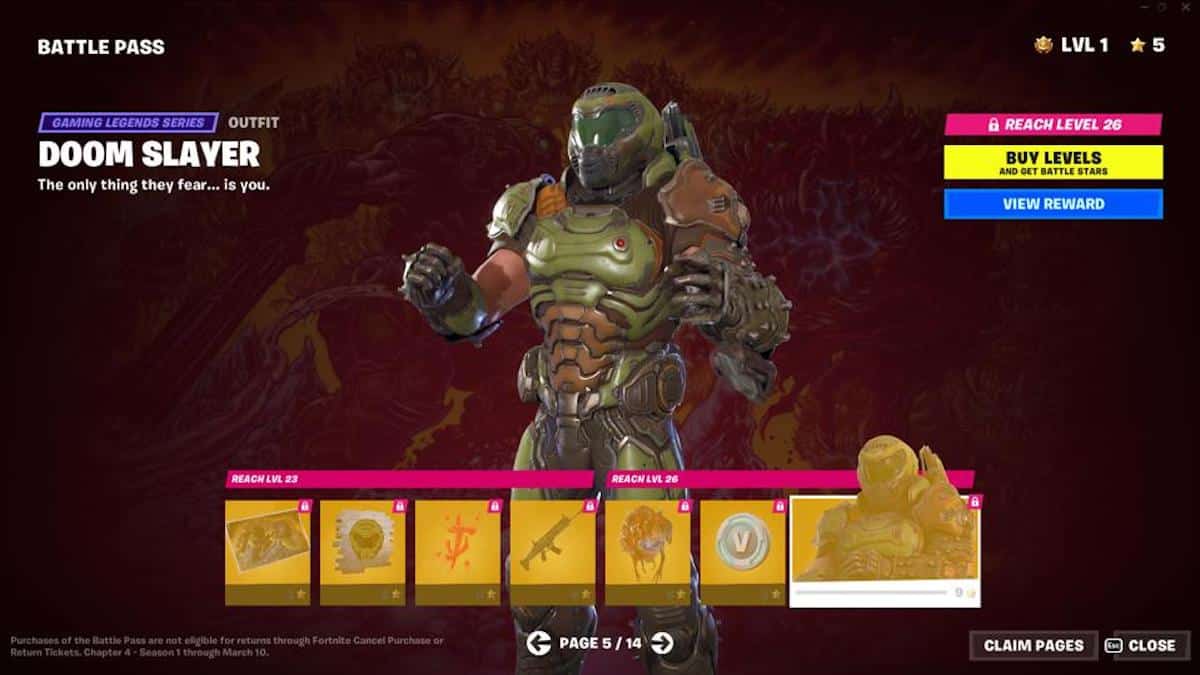 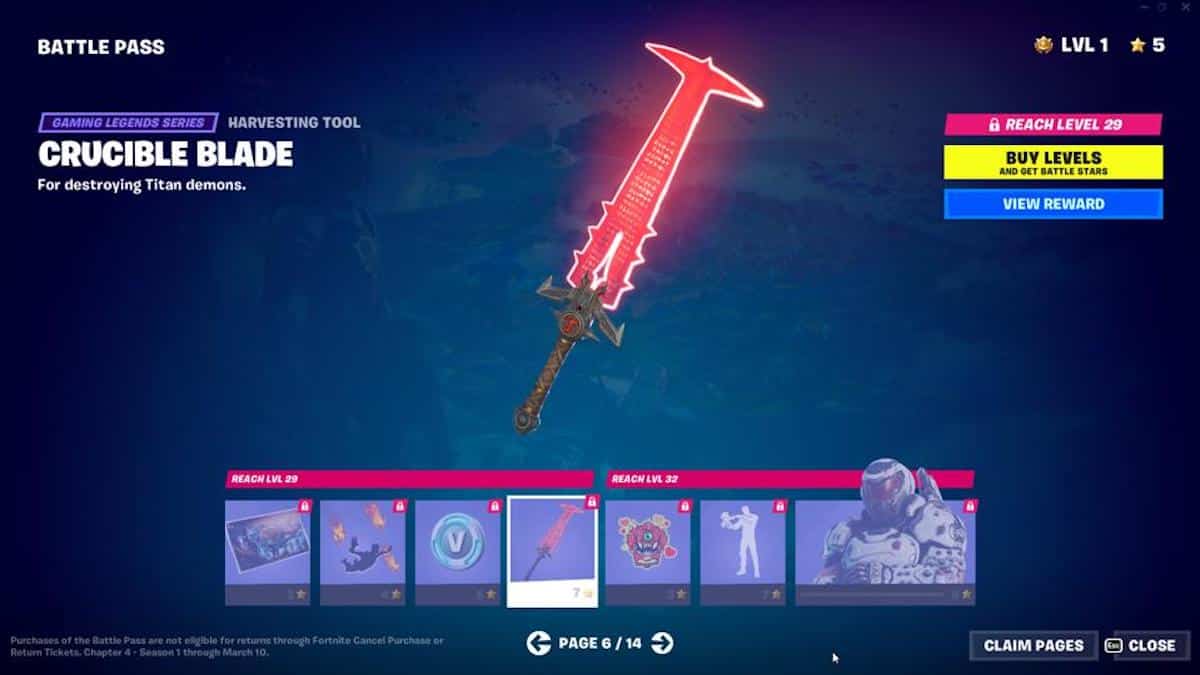 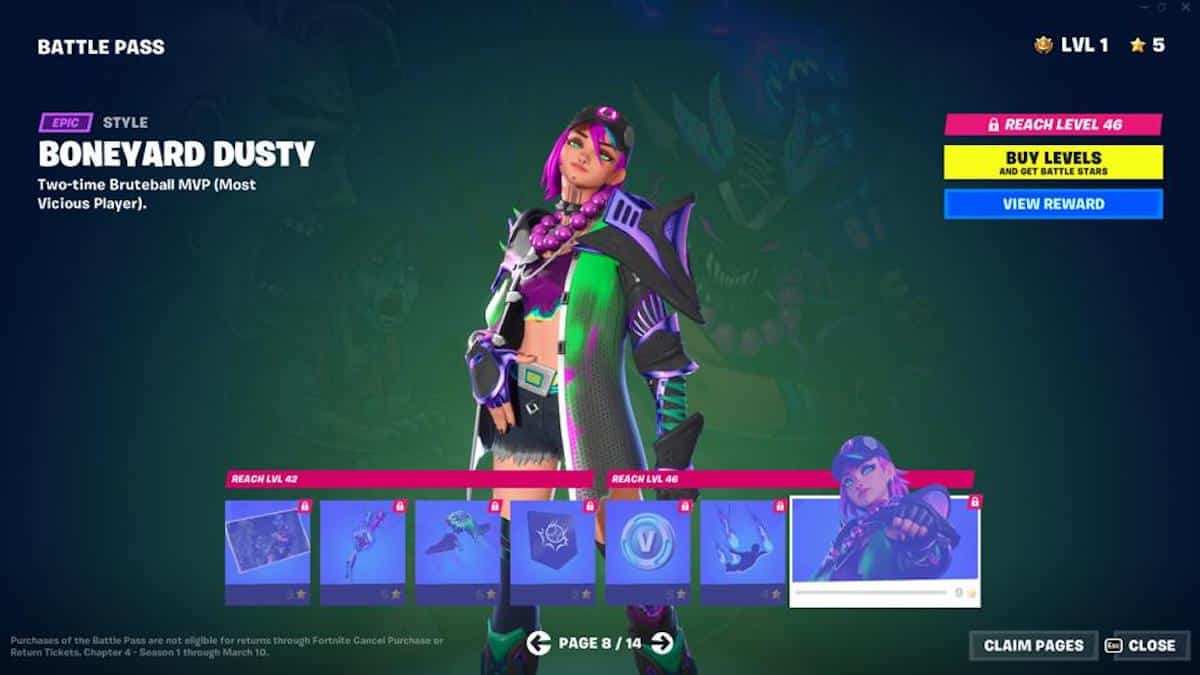 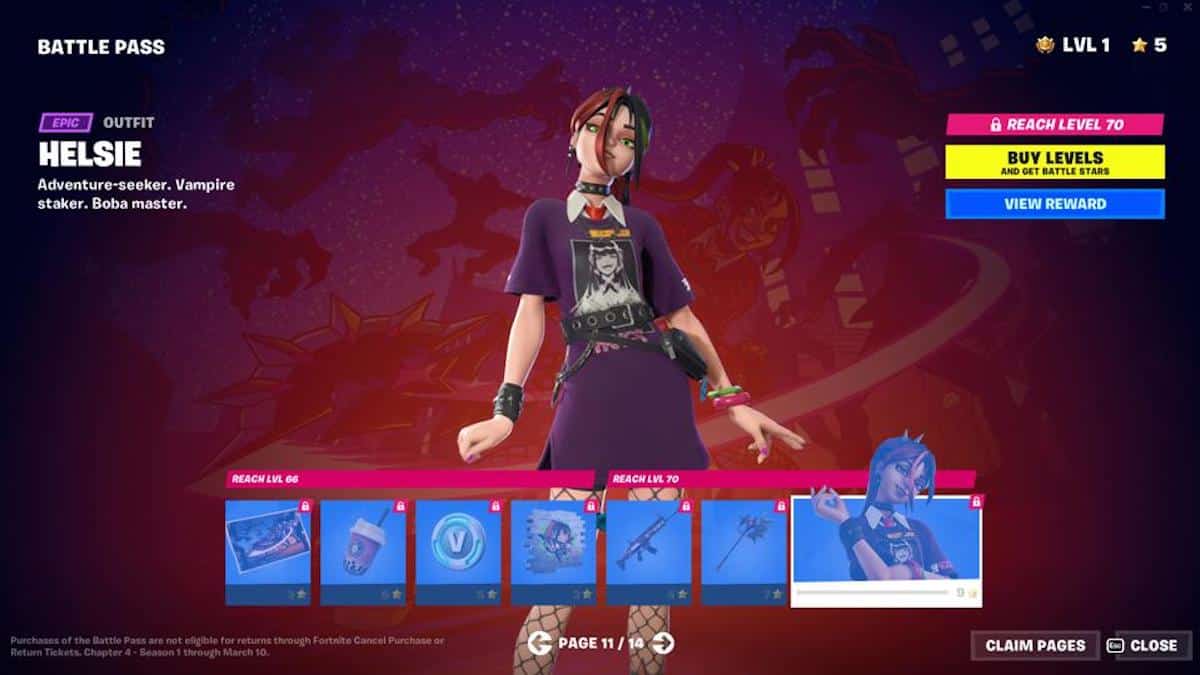 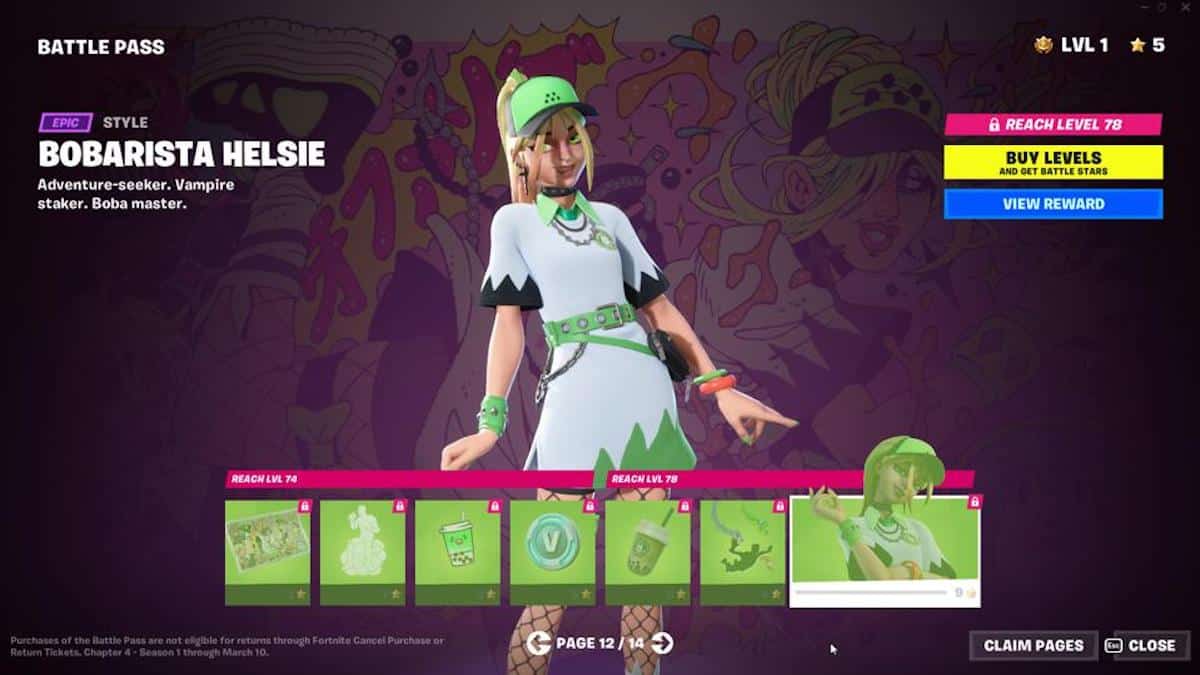 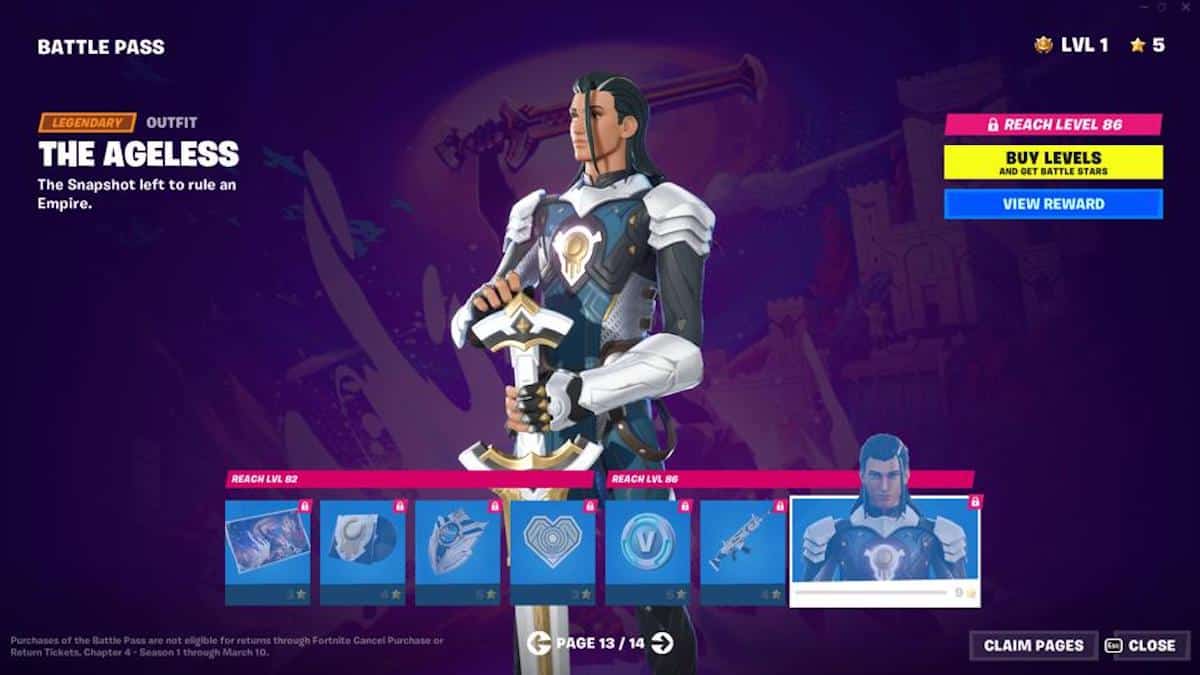 That’s everything in the Fortnite Chapter 4 Battle Pass. You’ll need to play through quite a few games to get to the very end. Although, every season someone seems to manage it in a single quest-filled day! Outside of insane grinding, though, it’ll a bit of a journey to reach level 100.

That’s not everything you can get in the Battle Pass, though. The Fortnite Chapter.4 Battle Pass is adding even more new ways to get cosmetics. There’s the normal bonus skin, along with the new mid-season drops too! These are the rest of the rewards you can get from the Battle Pass. 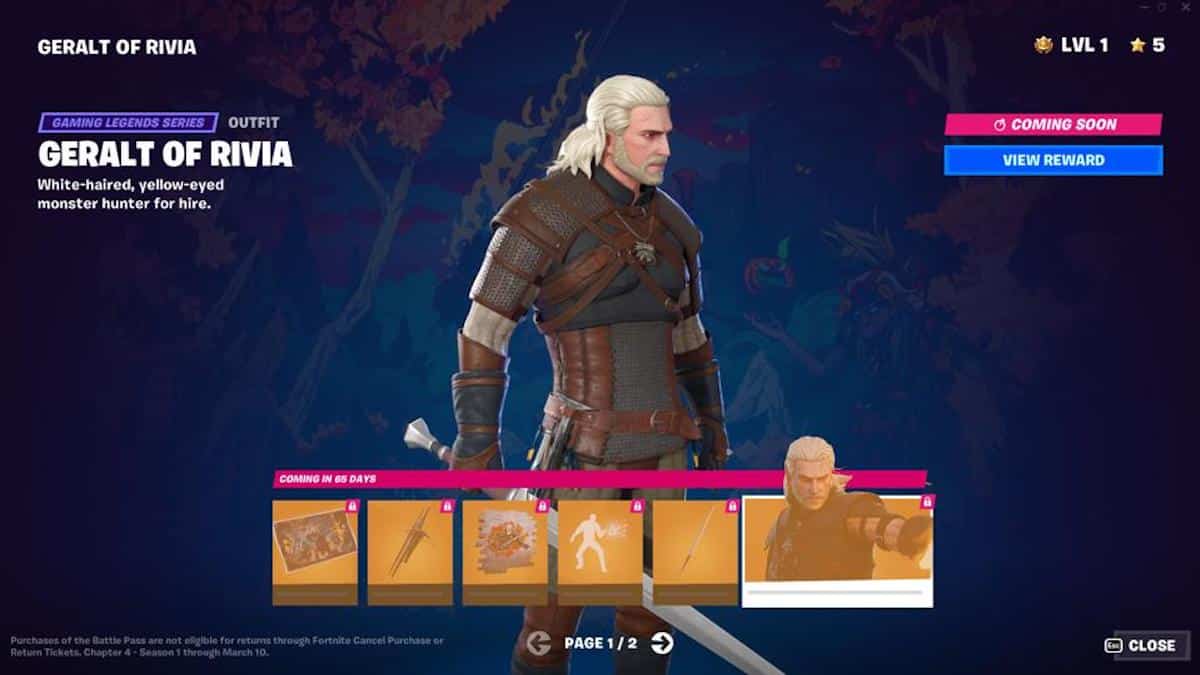 Fortnite’s bonus skin is always a fun inclusion, often giving players a fun crossover. This season it’s one of the biggest characters in gaming, Geralt of Rivia. The protagonist from the Witcher games, books, and TV series is making an appearance in Fortnite, along with emotes and other cosmetics to customize your whole loadout.

This version of Geralt is straight out of CD Project Red’s Witcher series. They even credit the other dev for the skin in the copyright section, so it’s a more familiar character for gamers. This model is here instead of a more generic version based exclusively on Geralt from the novels or licensing the Henry Cavil Netflix version of the character.

Geralt is going to be the Bonus Skin. We don’t have his quests yet, but this is what you can unlock:

These won’t be unlocked through levelling up pages like other rewards in the Battle Pass. Instead, you have to complete specific quests. We don’t know what they’ll be exactly yet. However, they will probably just be some small tasks across the season’s unique content.

Geralt is going to unlock about 65 days after the season started or at the beginning of February. This also gives us a bit of a clue as to how long the Season is going to last. Players will likely have more than a month to make sure they get all of these. We might also get an alternative style for Geralt. Usually, the second page of rewards is added which includes more emotes and a bonus style for the skin. While it just displays one page for the Fortnite Chapter 4 Battle Pass Bonus skin, we might see an extra make its way in before the skin comes out. 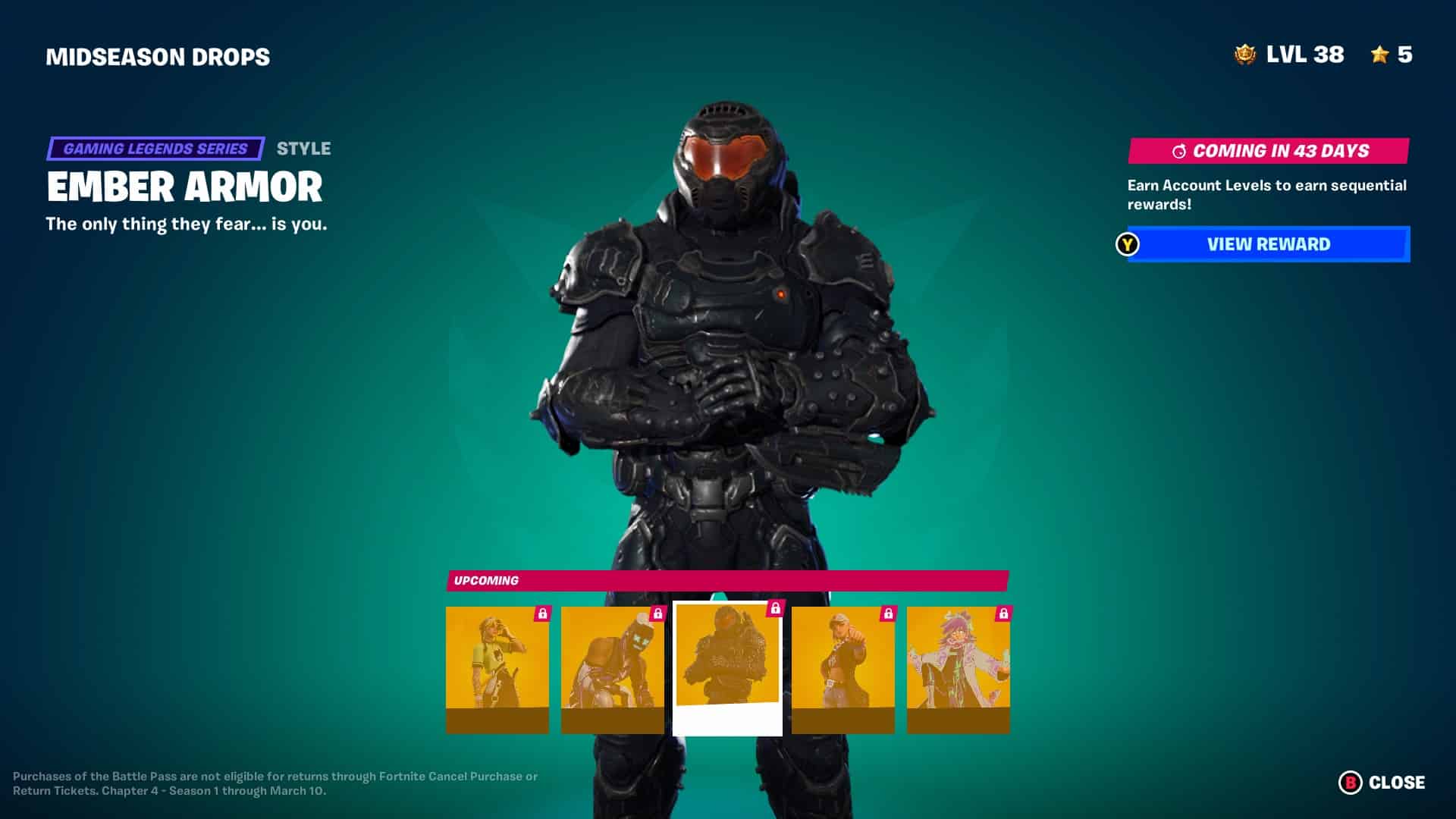 Getting the skins themselves is cool, but the bonus rewards are always what players strive for. These are real status symbols. Reaching the higher ends of the bonus skins marks you out as dedicated, having climbed up many levels above where the normal rewards stop. These have gotten more creative lately, too. They're not just recolors of standard skins now. They’re often unique items and emotes by themselves.

Most of the skins in this section are extra alternative styles for the Battle Pass skins. Although, they’re typically in a different pattern which marks out which players have put the work in.

The Bonus styles are divided into a few normal pages. You claim the rewards the same as the normal Fortnite Battle Pass Chapter 4 skins. By just picking individual items with your Battle Stars. Although, these aren’t as free form as the Pass. You basically have to get them in order if you want to unlock everything. These are all the bonus rewards.

The last two Bonus pages haven’t quite been revealed yet. However, they’ll be unlocked pretty soon. These are pretty far away from getting claimed right now. Unless you’ve bought the first 100 levels, it’s unlikely that you’re hitting this section for quite a while. This is a new category! Starting in January, we’ll see some new drops appear in the game halfway through the season. This keeps things fresh and gives you something to work toward a month in. It’s a nice way to break up the season as we wait for the Bonus skin this season. These are the midseason drop skins for the Fortnite Chapter 4 Battle Pass.

Other Skins in Fortnite Chapter 4

That’s everything in the Fortnite Chapter 4 Battle Pass so far! Across this Battle Pass, we’ve got loads of fun styles. There are crossover skins, cool original Fortnite skins, and loads of extra cosmetics. One nice thing about this Battle Pass is very few of the back blings and other items are locked to skins. Everything is useable for every skin, which breaks a bit of a pattern for Battle Passes in Fortnite, keeping things locked out for certain skins.

Alongside the pass, though, there’s loads of exciting content coming for the game throughout Chapter 4 Season 1, Which includes their latest collaborations, with Fortnite X Mr Beast and My Hero Academia coming to the game.