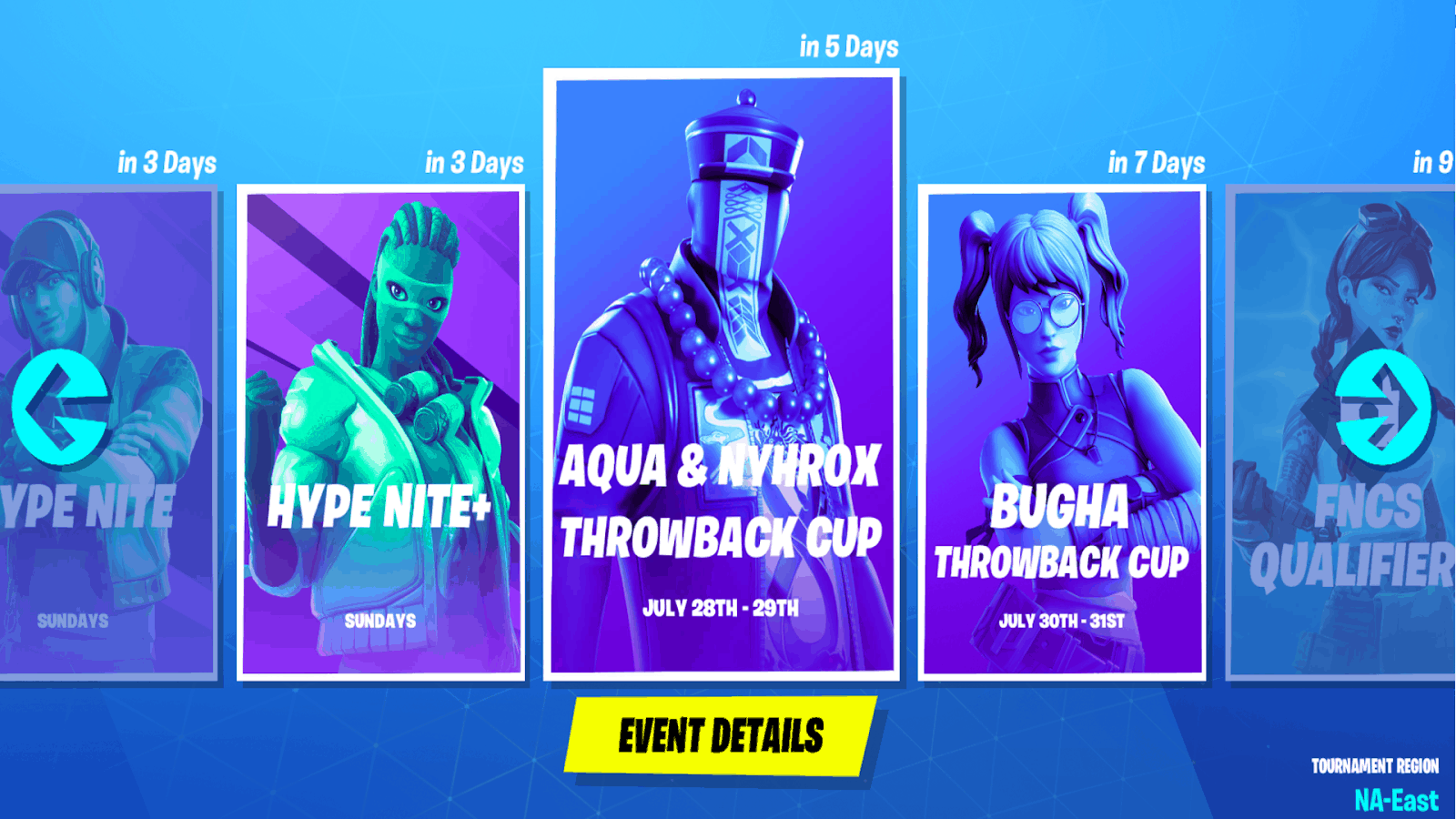 Fortnite is partnering up with Bugha, Aqua and Nyhrox for their own Throwback Cups.

Fortnite’s competitive season rolls on with a Throwback Cups pair in honor of the World Cup Solo Champion Bugha and Duo Champions Aqua and Nyhrox. All three players teased that these tournaments were on the way yesterday.

The Fortnite Competitive Twitter account has confirmed that the three Fortnite World Cup Champions are hosting separate tournaments, which will include any and everyone interested in competing. We have compiled some information based on what is available in the Fortnite in-game compete tab.

❗Tournament Alert❗ Compete Solo in the @bugha Throwback Cup, or grab a friend and duke it out in the @aquaa & @nyhrox Throwback Cup!

Find out more in the Compete Tab in game!

Epic Games has partnered with Fortnite World Cup Champion Bugha to host a solo tournament with a prize pool for grabs. Bugha’s Throwback Cup will occur over two rounds. It is available to all competitive Fortnite regions. Top 100 players will advance from round one to round two, except for Bugha’s home region, NA East. Only 99 players from NA East will advance to the final session where “Bugha will be awaiting the 99 best players.”

The Bugha Throwback Cup will begin on July 30 for NA East players. It will conclude a day later on July 31 with the Grand Finals. The tournament is region-locked, meaning players can only participate in one region. Round one will feature a maximum of 12 matches over four hours. The Grand Finals will feature six games to round out the competition in a custom game setting.

In recent months we’ve seen Fortnite partner with professional players like Mongraal, MrSavage and Benjyfishy for their competitions. Each player hand-picked their ideal format and scoring system. The same applies to the Bugha Throwback Cup. Here is the scoring system breakdown for the World Champion’s Fortnite tournament:

The tournament prize pool will total out to $100,000 spread across all seven regions. With NA East being the flagship region for the competition, refer to the prize pol breakdown below:

The first-ever Fortnite World Cup Duo Champions are also receiving a Throwback Cup. Aqua and Nyhrox are sticking with the duos format that they found success in nearly a year ago. Similar to Bugha’s tournament, Aqua and Nyhrox’s Throwback Cup is open to all competitive Fortnite regions. It will also occur over two days and two rounds of competition.

The top 50 duos in each region will qualify for the Grand Finals except for the Europe region. In Europe, the top 49 duos will have to square off against the World Cup Champions, who will reunite for the first time since splitting after their multi-million dollar win. The Aqua and Nyhrox Throwback Cup will begin on July 28 and end on July 29. Players can lock themselves into only one region for this tournament.

Duos can play a maximum of 12 matches in round one over four hours. The Grand Finals will feature six games to round out the competition in a custom game setting.

The World Champions have come up with their ideal scoring system for the Throwback Cup. Here is the scoring system breakdown for Aqua and Nyhrox’s competition:

Aqua and Nyhrox’s tournament will also receive a $100,000 prize pool backed by Epic Games. European players have the highest prize pool at stake with $40,000 paid out to the top-10 duos. Refer to the prize pool breakdown below for the European region.