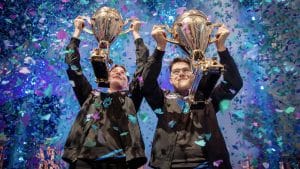 Aqua and Nyhrox took home one of Fortnite's biggest victories, but their win was quickly overshadowed by Bugha's achievements.

The Fortnite World Cup was the quintessential event in the battle royale’s two-year history. Over 19,000 fans and the best professional players across the world packed into the Arthur Ashe Stadium in Flushing, New York on July 27th of 2019. After ten weeks of online qualifying events, the talent pool narrowed itself down to the best 50 duos and 100 solos. The stakes were higher than ever with a $30M USD prize pool. Duos came first and produced one of the most outstanding stories in esports history. Then Kyle “Bugha” Giersdorf and his subsequent World Cup victory drew all the attention away from Aqua and Nyhrox. Bugha became a gaming icon with his accomplishment. The same cannot be said for duo champions, David “aqua” Wang and Emil “nyhrox” Bergquist.

Aqua and Nyhrox linked up before the Fortnite World Cup Qualifiers. Professional Fortnite players endured ten grueling weeks of competition with the ultimate goal of qualifying for the $30M USD tournament. It was by far the highest prize pool in Fortnite history. The two European players placed 64th in week two of qualifiers but followed this up with a 3rd place finish in week four. This high placement secured their spot in the Fortnite World Cup Duos tournament.

Many talented players around the world prepared to compete for a piece of the $30M USD prize pool. Unfortunately for Aqua and Nyhrox, the two were not meshing as well as they once did. The highlight package on Aqua’s YouTube channel showed precisely how dialed in he and Nyhrox were. They kept their composure through the tournament when the pressure mounted. Both players saw the writing on the wall as the World Cup approached, and were hoping to go out with a bang.

Several of the best duos across the globe were also in attendance with hopes of walking away with $3M USD. Player combinations like Benjy “benjyfishy” Fish and Martin “MrSavage” Foss Anderson along with Kyle “Mongraal” Jackson and Dmitri “mitr0” Van de Vrie stood as favorites heading into the competition. What took place was a pair of underdogs who rose to the occasion under immense pressure.

Both Aqua and Nyhrox were brimming with confidence heading into the Fortnite World Cup. In the video titled Stories from the Battle Bus, Aqua stated, “I was not under pressure at all,” as the players readied themselves for the opportunity of a lifetime. The eventual champions got off to a rough start with a small number of points through three matches. Their predicament flipped quickly into Aqua and Nyhrox, achieving back-to-back Victory Royales. Before anyone could realize it, Aqua and Nyhrox were back in the mix with one game remaining. Their final match completed an insurmountable come back as the two finished in 8th place and secured the Fortnite World Cup Championship.

As the confetti fell, Aqua and Nyhrox validated themselves as two of the best Fortnite players in the world. This achievement would ultimately cement them as untouchable in the Fortnite history books and the minds of hardcore fans across the globe. Aqua and Nyhrox worked hard toward their goal, and it paid off on July 27th. Each player earned $1.5M USD in winnings and achieved esports immortality. The Fortnite World Cup Solos Competition followed on July 28th and ultimately cast an enormous shadow on the European’s immortal moment.

Despite winning the championship, Aqua parted ways with Nyhrox in favor of a predominantly German-speaking duo partner, Klaus “Stompy” Konstanzer. This decision ended the unusual history of the first-ever Fortnite World Cup Champions. Nyhrox did not particularly feel the need to speak out on the matter as aqua decided to separate. Aqua addressed the parting of ways on Twitter in a statement:

“[I] started this whole thing wrong [and] never meant to send hate to nyhrox or anyone. nyhrox and i have been playing for a long time and we won worldcup yes but that doesnt mean we are the best duo or i could improve more with someone else, i feel like stompy and i fit each other better and nyhrox and i have been talking about this for longer aswell [sic]. sorry for the "beef" on twitter i never meant to hurt anyone, nyhrox and i are friends and i wish him the best of luck in the future.”

As the World Cup Champions went their separate ways, their victory ultimately faded along with their partnership. There’s no apparent reason as to why Aqua and Nyhrox do not receive as much attention for their unprecedented achievement at the Fortnite World Cup. Winning two games back-to-back might be one of the single best esports moments in 2019. Despite their accomplishments, Aqua and Nyhrox evaded the spotlight as the solo champion, and Kyle “Bugha” Giersdorf embraced it.

No Love for Aqua and Nyhrox

It’s challenging to come up with a reason as to why Aqua and Nyhrox received significantly less attention for their victory. First and foremost, it could merely be a case of the Fortnite World Cup duo competition occurring before solos. Although many viewers tuned in to watch the competition, the Twitch Tracker website indicates that the Duo Finals peaked at 379K viewers, whereas the Solo Finals peaked at 488K viewers. These are just rough numbers, but the solo tournament peaked at over 100K more people than duos.

Hey guys, I got nominated for 'name of the year' in Norway, and I would really appreciate if you guys would check it out and vote for me.

I appreciate all the support I've had! I couldn’t have imagined coming this far, it’s really surreal, Thank you. ❤️https://t.co/8wXW9KvRwR

Another possibility is that Bugha’s marketability as a young American Fortnite player set him apart.. Marketability is typically a joke in competitive Fortnite, but that doesn’t make it any less accurate. Aqua and Nyhrox hail respectively from Austria and Norway so there is a clear difference in geographical backgrounds. It’s worth noting that Nyhrox received a nomination for ‘Name of the Year’ in Norway. This award recognizes “... men and women who have made an extraordinary humanitarian effort or people who have excelled in sports or culture.” Whatever the case may be, the name Bugha carries a lot more cachè than Aqua or Nyhrox.

History Made is History Earned

Let’s not forget about the accomplishments of Aqua and Nyhrox. Both players may not have wanted the fan-fare because they ended their partnership. Despite their split, they rallied back from adversity on the most important day of their competitive Fortnite careers. Aqua and Nyhrox are likely much more popular in the minds of EU Fortnite fans. The esports presence of Epic Games’ phenomenon is still developing, but fans and curious observers tuned in to watch as these two European’s claimed victory. As we head into a new year of competitive Fortnite, Aqua and Nyhrox will remain a part of history as the first-ever Fortnite World Cup Duo Champions.