Patch 6.2 promises to be exciting. And besides new content there is also a slew of quality of life enhancements and nice little additions that'll make adventuring a little easier.

The Overhaul of the Main Quest Scenario Continues

While getting ready for 7.0, the Final Fantasy XIV team is hard at work to make older content more accessible. As promised, by the time the next major expansion comes out, most main quest scenario related content will be playable with AI companions. Not only that, but little things like solo duties and older dungeons will also see a nice little overhaul. And with patch 6.2 we wrap up the overhaul of A Realm Reborn content and move onwards to Heavensward. 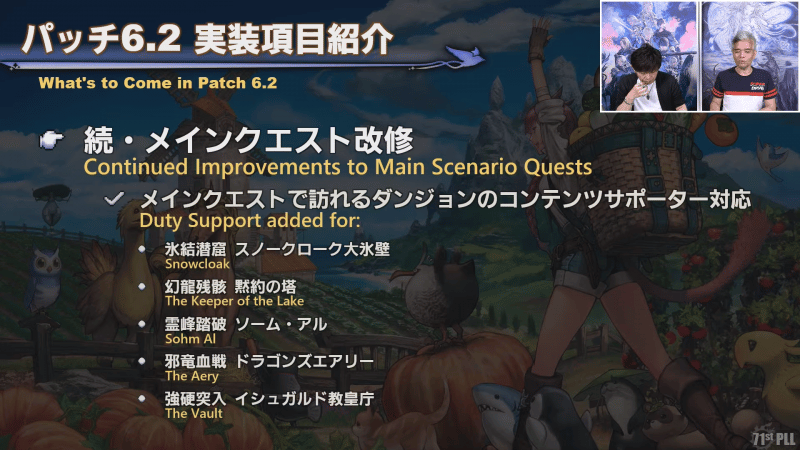 The plan is currently to make the duty support system available for the following dungeons: Snowcloak, The Keeper of the Lake, Sohm Al, The Aery and The Vault. In addition to the duty support system, the dungeons will also see a small overhaul in graphics and some of the bosses might see some revisions. According to director and producer Naoki Yoshida, the team that is currently working on this content used to be players before joining the team. And he's confident that they'll know what changes and additions the community might enjoy.

We also saw that at least for the Heavensward content, the Warrior of Light is now joined by the NPC's prominent in the main quest scenario. And they'll probably bant and have similar quirks to the actual trust system that was introduced with Shadowbringers. The first 8 man trial Thornmarch or Good King Moggle Mog XII is also seeing some revisions, as the team felt like he was too hard for new players. So there will be some adjustments to make the fight less of a mess than it is in the current form. But it's left to be seen how that'll effect the extreme version of the encounter.

Also the very beloved Steps of Faith trail, that is an absolute slog to play through these days, will be turned into a solo instance instead. And it'll probably be a more cinematic encounter, similarly to the changes we've already seen to similar solo fights from 2.0. However we do not know yet, if any of the 2.x solo instances will also see some adjustments. Not that they need any, but some more cinematic flair to bring them up to the current standard would be nice. Of course with a new raid patch, come new crafted gear and a new weekly tomestone currency. This time time around we'll get Allagan Tomestones of Causality, which can be used to get the item level 610 gear. There'll also be a new set of crafting and gathering gear for scripts. Or at least there should be, we are due for some catch-up gear. And with that comes also new crafting recipes, and new things to gather for aetheric reductions.

From 6.1 onwards, you'll also be able to request repairs from other players, even inside duty. This feature has been requested for a while, and will make raiding a little more easier. Because the last thing you want, is dip out of a raid mid progress because your gear has almost been grinded to dust. And if you are an omnicrafter with all the material to repair, you'll surely ascend to being your statics favourite. Can we now campaign to allow trade within duties as well? So no one has to shamefully make everyone leave because they forgot to buy food.

And finally we're getting the most important upgrade of them all, the glamour dresser is being extended to up to 800 slots. that's almost double! And Yoshida was already very sure that within a few months, players would complain again. Because 800 item slots are still not enough to create the perfect array of outfits for every single job. Don't believe me? I want all my crafters and gatherers to look fly when doing the crafting and gathering. And all their special outfits are class specific. Including their main and off hand tool that's already 100 slots wasted. And there are still not enough glamour plates to either. There are 30 jobs in the game now, and I need at least enough space to make 5 outfits for each of them. Its very important, more important than new content, I swear.

Anyways.. oh there is also an UI update to the action list. Now it'll not just display skills in the order you'll get them during levelling. Alternatively it'll also sort your skills into categories and show you how they combo into each other or when and how they upgrade. But you'll also still be able to switch back to the the current list at any time. The only thing missing here, was the supposed expansion of the North American datacenters Square Enix announced back in January. It could be that some plans have changed, or that we'll hear more concrete plans on the expansion during the next live letter.

That concludes our summary of the miscellaneous updates for Final Fantasy XIV. You c    an find a short version of the entire live letter here, and you can find even more news and guides all around Final Fantasy XIV here on ESTNN Final Fantasy XIV – How You Can Prepare for Patch 6.2