FaZe Dubs explains his point of view on the cheating allegations.

If you haven’t been following the story, footage surfaced over the weekend of FaZe Clan’s Danny “Dubs” Walsh allegedly teaming with another player named Waffleslul in a Fortnite Solo Cash Cup. The two players landed at The Rig point of interest during the competition for all six games. In the now-deleted video, the editor and Twitter user Leafrr highlighted some suspect moments between the two finalists. Most of which included Dubs and Waffleslul splitting vault loot. In one instance, the two appeared to team up on another player and never managed to encounter in a one-on-one fight.

Since the footage came out, Dubs and Waffleslul disappeared from the Cash Cup leaderboard. Their absence led most people to think that Epic Games handed out bans to both players. Dubs confirmed as much in a brief 40-minute stream earlier this evening.

30-Day Ban and No FNCS Invitational

On Dubs’ Twitch stream, he confirmed that Epic Games doled out a 30-day ban. This punishment will exclude him from participating in the $2M USD FNCS Invitational. After mulling over the footage and ensuing response, Dubs decided to explain his side of the controversy. He first stated that he could not review in-game VODs due to the ban. However, he recorded commentary over each of the six Cash Cup matches to send to his manager. Dubs exclaimed that he has been landing at The Rig since the beginning of Chapter 2 Season 2. The Rig features some of the best loot in the game. He and duo partner FaZe Megga landed there during Duo FNCS and ended up taking second place overall. The Twitch stream featured Dubs and fellow FaZe Clan member Cbass reviewing and explaining each of the six matches in the Solo Cash Cup.

Specific loot paths, minimal spawn fights and locating TNTina filled much of the discussion. Dubs reviewed the six games and informed his viewers of exactly how he plays The Rig. In essence, he glides into the POI, scouts for TNTina, follows his loot path, opens the vault for its loot and tries to exit without fighting. Dubs mentioned that multiple pros avoid fighting off spawn to ready themselves for late-game. All the while, Waffleslul executed his strategy of avoiding Dubs and a potentially catastrophic fight.

He also addressed the “team-shooting” allegations that took place in one of the six matches. “Why would I not fight that?” Dubs asked his audience while stating that the solo player was in shambles and an easy target. All in all, Dubs felt there was no wrongdoing on his part. The original Twitter video did not provide enough context for the situation. Feel free to listen to Dubs’ explanation to see the entire breakdown from his perspective. 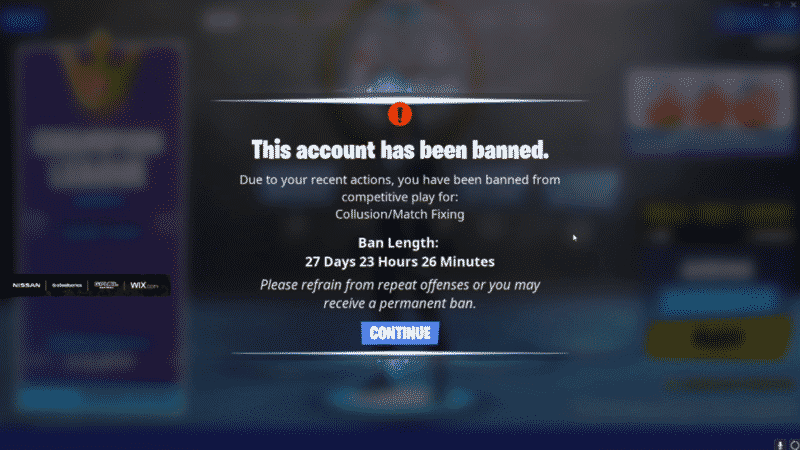 Despite Dubs’ side of the story, the 30-day ban will likely remain in effect. There is no appeal process for banned players, and Epic Games has never shown much wiggle room in that regard. The ultra-talented FaZe Clan member made it clear that he is not looking to escape his fate. “I’m not trying to bash Epic or anything like that. It’s just really frustrating and I think Epic’s doing a great job right now competitively…”

Dubs then ended his live stream. The ban itself is much lighter than that of Kreo, Bucke, Keys and Slackes. All four players took part in the Storm Surge scandal from the most recent FNCS and received 60-day bans.

Overall, Dubs and Cbass stood firm that Dubs had no ill intent and did not cheat. Many rushed to his aid on Twitter, including fellow FaZe Clan member Timothy “Bizzle” Miller. Several professional players began tweeting #FreeDubs as a result of his explanation and in response to the banning. Nonetheless, Dubs will have to sit out for the next month or so. Unless Epic Games explains what they saw in the footage, we’ll never know their reasoning. 27 days remain until Dubs can play Fortnite again.

Stay tuned to ESTNN for more Fortnite coverage and updates!