The Call of Duty League standings are shaping up in many ways in Week Three. 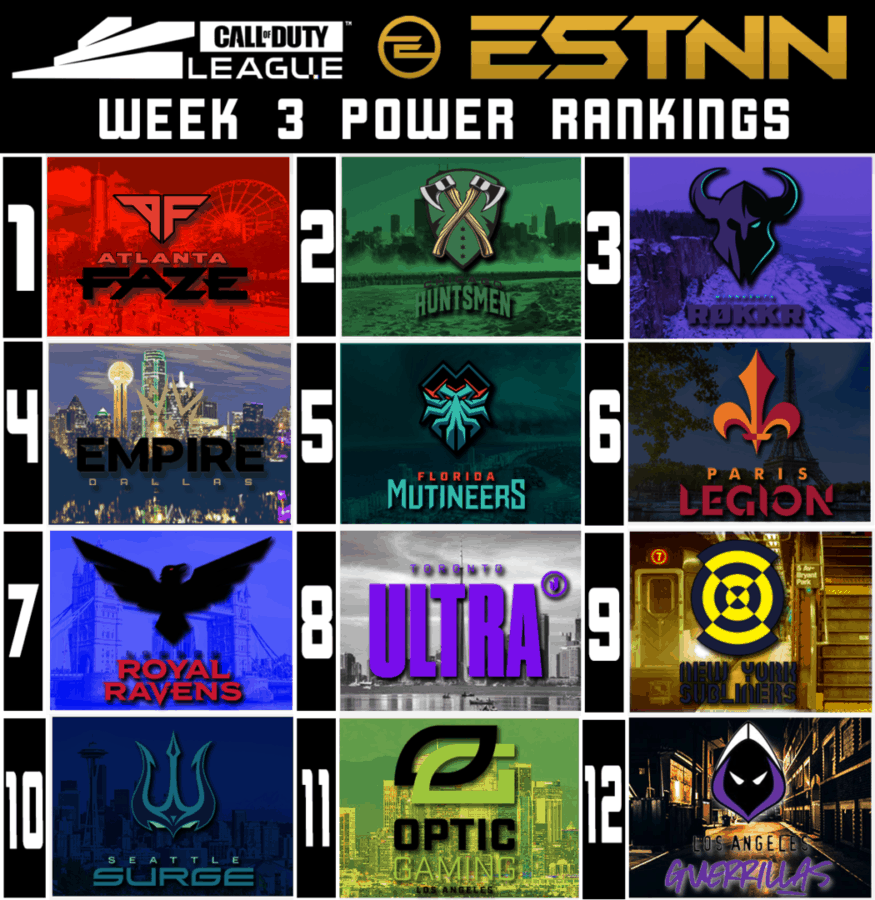 Three weeks in, it is clear that the Atlanta FaZe and the Chicago Huntsmen are the teams to beat. Any time one of these two teams is in attendance, they will be the favorites to win it all.

Many expected the Atlanta FaZe to come out and dominate their homestand after missing Week Two in London. They did just that. FaZe became the first team in Call of Duty League history to defend their homestand and win a tournament at home. The FaZe team has no weak links. Each and every member played their role to perfection.

Unfortunately for the fans, we did not get to witness the highly anticipated match between the two top teams, Atlanta and Chicago. Chicago came out slow and never picked up the pace. They barely edged by in their first match of the Atlanta homestand vs. the struggling Toronto Ultra. The match went to an intense Map Five, Round 11. Chicago won the match in the final seconds to save themselves from the embarrassing start.

After beating Minnesota in a close match, the Huntsmen went on to face the Florida Mutineers in the semifinals. After going up 2-0, the Huntsmen crumbled. They could not win another map and were reverse swept by the Florida team in a huge upset. Had they came out victorious, Chicago would have had the chance to prove themselves vs. the young Faze squad. Instead, they were sent home and had to watch Atlanta sweep Florida 3-0 with ease to claim the championship and the trophy.

Despite the disappointing loss, Chicago remains number two in the power rankings. We have to believe Chicago will turn this around and use the weekend as a wake-up call. One thing is clear though, the competition is a lot tighter than we initially thought.

Week Three in Atlanta showed us that the skill level between the 12 different teams is a lot closer than we first thought. The Minnesota RØKKR went undefeated at home on Launch Weekend and carried that momentum into Atlanta. They defeated a strong Paris team twice and fell to the Huntsmen 1-3 in group play. In the semifinals, Minnesota came out hot. The RØKKR went up 2-0 on FaZe. Fans thought for certain that a massive upset was in the works. However, as fate would have it, the talented FaZe team marched back and won three straight. Despite the loss, Minnesota came closer than anyone else has to beating the touted FaZe roster.

Florida came out and did the same thing. After a shaky start to the CDL season, Florida impressed in Atlanta. After falling to the London Royal Ravens on Saturday, the Mutineers got revenge on Sunday to send themselves to the semifinal round. There, they beat the undefeated Huntsmen for a spot in the Grand Finals vs. FaZe. Sadly, Florida was not able to finish the job and win the tournament. This was in part due to the team “running out of gas,” in the words of Mutineers star, Prestinni. Regardless, it was an inspiring display by the Florida team and sends the Mutineers up a few spots in our rankings.

The Dallas Empire team was not in attendance in Atlanta. As such, they remain in our second tier of teams. Their performance in Los Angeles coming off of an extended break will determine how they rank in the weeks to come.

Right in the middle, we have the two European teams. Both of these teams have shown moments of greatness coupled with uncharacteristic and poor gameplay. These two teams are wildly inconsistent and can’t seem to find their rhythm. The London Royal Ravens star player, Wuskin, said it himself on Twitter. “In shock, just don’t know what to say, wow. One minute we look unbelievable, the next we just look so sloppy.”

Players on both of these teams have expressed their disappointment along with the high expectations set for themselves. Paris and London will both need to refine their strategies and regroup if they want to reach the potential they know they are capable of.

Despite standing at 1-5 through three events, the Toronto Ultra may be better than they appear. Four of their six matches have been against top-four teams. The Ultra has had a rough schedule to start the CDL season. Despite this, the Ultra have displayed a few shining moments. Most notably, this past weekend vs. Chicago. The Ultra took the previously undefeated team all the way to Round 11 of S&D on Map Five. With their recent roster changes, Toronto is still trying to see what fits. Once they settle in, we may see this Toronto team turn a few heads in the weeks to come.

The New York Subliners remain at number nine on our power rankings. The Subliners were not in attendance in Atlanta. Therefore, we were unable to witness if the team has improved from their Launch Weekend and London homestand performances. New York will have a chance to prove themselves Week Four in Los Angeles. This will be a prime opportunity for the struggling Subliners. They will play amongst a relatively weak field that includes a few of the bottom-ranked teams.

The Seattle Surge were another team that received a bye week in Atlanta. The Surge certainly has potential with an all-star like Octane on their roster. Unfortunately for Seattle, their potential has not come to fruition. They are struggling mightily in S&D, a game mode they will need to familiarize themselves with as it can be played twice per series. The Surge will need to step it up when they play two weeks from now in Los Angeles.

Speaking of potential, we have OpTic Gaming Los Angeles at #11. The OGLA roster is stacked with talent. No one saw this coming prior to the start of the season. OGLA is the only team to not have yet won a single match. Granted, they have had perhaps the most difficult schedule you could imagine. OpTic Gaming has already faced FaZe twice and Chicago once, to go along with a bustling Florida Mutineers team. Like we said last week, the potential for this OGLA team is certainly there. For now, they will remain near the bottom of our power rankings. We can no longer give OGLA the benefit of the doubt until we see them start to win some matches.

The LA Guerillas end our list as the 12th ranked team. The Guerillas were the fourth of the four teams that did not attend the Atlanta homestand. Thus, we have no reason to rank them higher than we did last week. This Los Angeles team flashed signs of hope on Launch Weekend but that all came crashing down in Week Two. With an extra two weeks to prepare, the LA Guerrillas will need to come out firing at home in Week Four if they want a shot at succeeding in the inaugural CDL season.

There you have it for our ESTNN CDL Week Three Power Rankings. Tune in here at ESTNN each week for our updated power rankings, match recaps and more.