Learn where to find all ATM locations in Fortnite Chapter 2 - Season 7 to complete the Free Guy quests.

Fortnite Battle Royale’s collaboration with the newly released Free Guy movie is now in-game. Epic Games announced this crossover yesterday, including a purchasable Free Guy Outfit and a set of quests that yield the “Good Guy” Emote upon completion.

On that note, Epic introduced several automated teller machines (ATMs), which players much use to begin these challenges. Today, ESTNN provides the locations of all ATMs to help you finish these quests. 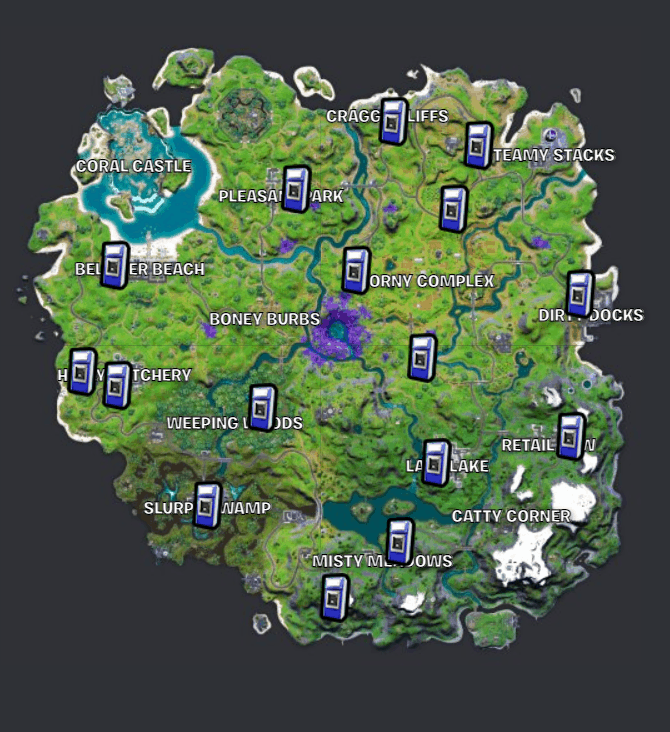 Thanks to the always helpful fortnite.gg website, we have a comprehensive map and all ATM locations. There are 16 ATMs across the entire map, and players will need to find one to start their Free Guy quests. One strategy players should consider is to land at one of the machines off the beaten path.

Most of the named points of interest (POIs) listed above typically contain many players, especially early in a Battle Royale match. A few locations, such as Apres Ski located southwest of Misty Meadows and the Gas Station east of Dinky Dish, may not have too many opponents.

Otherwise, you could always tackle any of the ATMs provided you’re confident in your fighting ability. Here is the complete list of Free Guy quests that you can gather from the ATMs in case you need a refresher:

Now that you know all of the ATM locations, completion of these quests is imminent. Remember, you must complete five of the challenges above to unlock the Good Guy Emote. The next step is to drop off the Battle Bus and knock these out!