Harness gravity's might as Sigma with the latest guide on how to win as Overwatch 2's most volatile tank.

A Force to Be Reckoned With

An astrophysicist that went mad after an experiment went wrong, Siebren de Kuiper served on the international space station before the universal secrets he discovered became too much for one mind to bear. Consequently, "Subject Sigma" now controls the power of gravity itself as one of Overwatch's main antagonists.

Here's how to play the rock-slinging tank hero in Overwatch 2.

Talon's mad scientist is as eccentric as he is dangerous. Wreck the competition with both offensive and defensive strengths while keeping a constant watch over your cooldown timers.

Sigma uses two imploding "Hyperspheres" to devastate his opponents. His primary fire shoots them one after the other, bouncing off of walls, ceilings, and floors. Sigma has unlimited ammunition, but goes through a short recovery delay before he is able to fire again. Further, damaging enemies pulls them towards the center of their implosion, and Hyperspheres cannot deal critical damage through headshots.

Pressing the ability key for "Experimental Barrier" launches a floating, frontward shield away from Sigma, getting farther away the longer you hold it down. It has 700 barrier HP, and regains 100 HP/second after 2 seconds of actuating. Everything except its center can pass through hard surfaces. 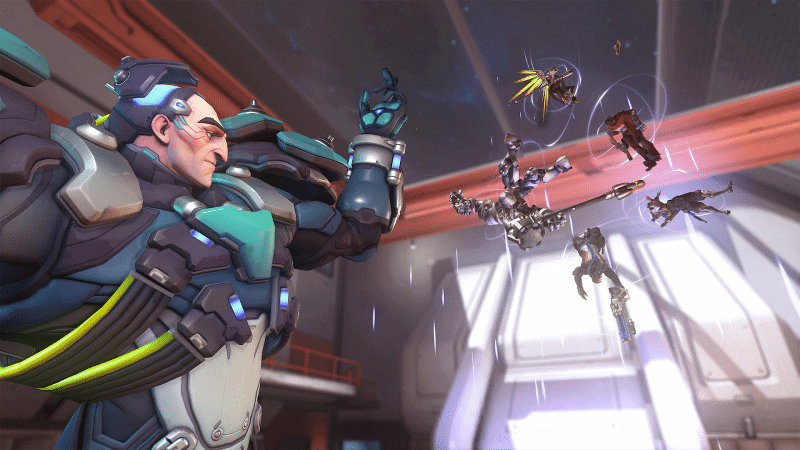 "Kinetic Grasp" lets Sigma absorb incoming enemy projectiles and convert it to a decaying shield overhealth. 60% of all damage gets transformed into temporary shields for a maximum of 400 HP.

With "Accretion", Sigma forms a large rock from nearby debris and lobs it towards a target, dealing splash damage and knocking an enemy to the ground.

Sigma's strongest ability, "Gravitic Flux", lifts enemies within a wide area upwards and slams them back down for half of their maximum HP. Sigma gains flying speed throughout the ultimate's duration. Spacebar makes him ascend, and Ctrl lets him glide down.

His skillset requires a calculating mind. Be constantly aware of your cooldowns, mind your positioning, and you'll virtually be un-killable. Do not overextend by yourself, or you'll give the enemy an opportunity to gang up on you.

Sigma's Hyperspheres shine when they're used on groups of enemies. The momentary effect can clump your foes long enough for your allies to synergize their abilities effectively. Use it's range to catch low-health enemies who flee. You can also shorten the recovery delay with a quick melee attack if you do it correctly.

Use their ricochet to reach around corners for fleeing/hiding enemies, and opt to fight in open spaces instead of close quarters.

His shield can be summoned while firing his Hyperspheres and using his other abilities. More importantly, you should always take advantage of its instant recall and short cooldown to find ways to cover your allies. Whether you're advancing or retreating, Sigma's shield can be extremely useful. Place your experimental barrier in strategic choke points and exits to make sure your team is dealing more damage against the enemy. But if you're fighting alone, mitigate enemy damage and stay behind it to give yourself a brief respite while waiting for Kinetic Reflux's cooldown.

This is arguably Sigma's most important ability because you can use it to cancel multiple enemy ults while sustaining yourself.

Alternate between sponging up damage and sending your barrier out when you're on the front lines. Be very mindful of the cooldowns, and get behind cover when you need to. Also, remember that cancelling "Kinetic Grasp" won't grant you any shields. With that in mind, for Newton's sake please peel for your support. If they stay alive, you'll stay alive.

This ability sets Sigma apart from other tanks since he converts enemy damage into healing. Read about our Overwatch 2 Tank Guide here.

Knocking an opponent down can cancel specific skill (even ultimates) that aren't instantaneous. The ability cannot be mitigated by Genji's "Deflect", D.Va's "Defense Matrix", and Sigma's "Kinetic Grasp". Use this only when you need to. The cooldown is considerably long, and the knockdown plus splash damage can save you in close-quarters situations.

Heroes whose ultimate abilities can be canceled by "Accretion" include:

Sigma's ultimate ability can swing a whole fight wildly into your team's favor. The first liftoff deals a nice 50 points of damage (only this instance can be damage boosted) while the trip back down rids all captured foes of half of their maximum HP. No, not "remaining HP". You read that right. Maximum HP.

Look to activate Gravitic Flux when you see your enemies starting to group up, and pull the trigger fast. Don't give them time to disperse. And when they're mid-air, throw your "Hyperspheres" to whittle away at their HP before the fall.

Dr. de Kuiper's "Gravitic Flux" also counters Brigitte's "Rally" buff, since it raises the enemy's health pool. And while the impact feels quite deep, there are still some ways for enemies to escape Sigma's forceful pull.

For one, the radius of the ultimate ability's AOE is visible to the enemy. Secondly, some heroes hold certain abilities that bail them out of "Gravitic Flux". Some include:

For more useful guides on all your favorite Overwatch heroes, follow ESTNN.