With all LCK teams announcing their official rosters, here are the best teams to follow throughout the 2023 LCK Spring Split.

Between the DRX’s victory at Worlds 2022 and multiple teams looking like they are building contenders, it is shaping up to be an exciting year for LCK. Although they lost one of the best players in the league, Park "Ruler" Jae-hyuk, to LPL, we also saw Park "Viper" Do-hyeon coming back home. Not to mention most of the World Champion roster of DRX stayed in Korea, despite all the fears of poaching from other leagues.

Although LCK might not have the LPL’s reputation of fast-paced and bloody League of Legends, it is still home to the highest level of League of Legends teams. Plus with the new scheduling changes for 2023, it isn’t too hard to catch some of the games during the split. Weekend games are in the perfect hours if you are trying to watch from NA, while the weekday games are in the optimal noon hours for EU. But getting into a new league, one you are not exactly familiar with, can be hard for some fans. What teams should you watch, which players are the best? In this article, we will talk about which will be a must-watch for the fans, even if they necessarily might not be the best team in the league.

Once the gatekeepers of success in LCK as Afreeca Freecs, neither the name change nor their promising roster didn’t help the Freecs challenge the title in 2022. After failing to make playoffs in the Summer, Kwangdong Freecs not only lost their newer signings like Yoo "FATE" Su-hyeok and Park "Teddy" Jin-seong to free agency, but also couldn’t keep their franchise player Kim "Kiin" Gi-in.

Kiin has been regarded as one of the best top laners in Korea in recent years and he was committed to the Freecs, both as AF and KF, for nearly five years. Unfortunately for the organization, Kiin decided being a franchise player in a middle-of-the-table team was not enough, so he finally left for a bigger project. After he left, Kwangdong Freecs choose to go with a more developmental roster, promoting their promising jungler BuLLDoG from their CL team and signing mainly young talent who were on other LCK teams as substitutes.

This split will probably be about these players getting some big stage reps under their belts, so it’s best not to expect much from them in Spring.

Except for that one series each split where they upset one of the contenders, Fredit BRION haven’t been the most exciting team to watch and follow in the LCK. They also didn’t have much success in their two-year history in the league. Aside from making playoffs as the sixth-place team in the 2022 Spring, they finished all their regular seasons ninth or tenth.

Coming into 2023, they brought in Karis, from HLE, and Effort, from NS, but neither player is coming off a particularly impressive year with their previous teams. And with no veteran presence in any other role in the roster, they might find it hard to start the split in a successful manner.

Unfortunately for BRO fans out there, the only reason to watch this team in 2023 might be to see how Lord Morgan is doing.

2022 was nothing short of a disaster for Nongshim. They came into Spring with an ambitious roster including Canna, Bdd and Ghost, and with Worlds qualification as the goal. But with the roster not being able to find their synergy combined with players individually underperforming, this goal turned out unrealistic. Worlds qualification aside, they didn’t even make playoffs, finishing both Spring and Summer in eight-place.

So, for the 2023 LCK Spring NS decided to go for the opposite of spending big. They decided to promote their entire LCK Challengers League team to the main team. Nongshim RedForce Challengers are the LCK CL 2022 Summer Playoffs winners, despite their mid-table finish in the regular season. While it isn’t too sensible to expect too much from this roster in their first split, at least it will be interesting to see what is essentially an LCK CL team going against LCK teams.

SANDBOX was one of the most exciting teams in the LCK last Summer, and they were one of the favorites going into the Regional Finals to represent Korea at Worlds 2022. They were even one game away from beating DRX in their last series, but they, unfortunately, lost to the eventual World Champions.

With the heartbreak, came players leaving the team. They lost Kim "Dove" Jae-yeon to the LPL and Kim "Croco" Dong-beom to DRX once again. But the most significant blow came when their star player and one of the most promising ADCs in the league, Lee "Prince" Chae-hwan announced he was heading to North America to join FlyQuest. With the main core of that team gone, it is unrealistic to expect SANDBOX to repeat their performance from last year, especially when their playstyle was to let Prince 1v9 in most games.

They brought in some young players, but neither Burdol nor Willer had the most promising Summer as prospects. It looks like the main thing SANDBOX fans will look forward to in Spring is seeing Kael and Clozer get some more experience and continue improving. 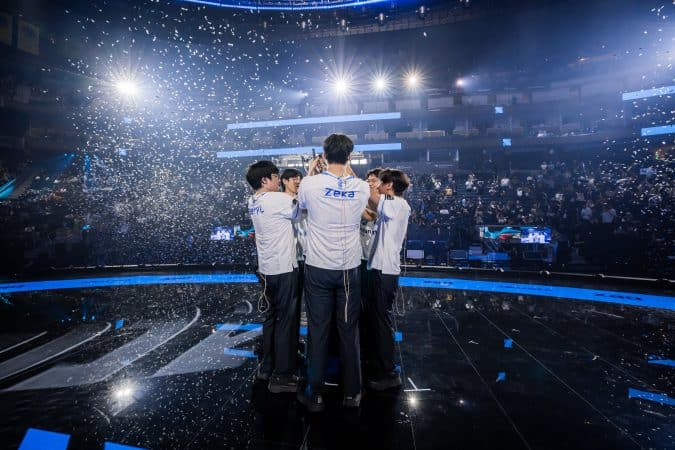 Well, the fears of DRX fans came true as the World Champion team from just two months ago is nearly all gone, with the only remaining player as BeryL. This will hurt doubly so as most fans were excited to see this roster play in the regular season as Worlds winners because they didn’t have the best split in Summer 2022.

But even though that opportunity is gone, DRX not having a down LCK Split during the Summer means this roster might not be as bad news as expected. If we ignore the Worlds 2022, the replacements DRX found for their roster are actually pretty good. Rascal and FATE are solid solo laners, and Croco is a promising jungler even though he can be coin-flippy at times. And with a bot lane of BeryL and deokdam, who started to find his NS form during Worlds, this team can give fans some good games.

Losing the best bot lane in LCK, Ruler and Lehends, is a big blow. But props to Gen.G as they didn’t hit the panic button and were ready with a plan. They signed Delight from BRO and promoted their CL ADC Peyz, who they are hoping will become the next big bot laner.

On top of seeing how well Peyz can fill Ruler’s shoes in his first split, Gen.G also kept their full top side for 2023. Both Doran and Peanut struggled during Worlds, but there is no reason for them not to return their Summer 2022 form. Not to mention Chovy is still Chovy, and he always gives fans a reason to turn on the stream and watch him work.

Even though their heartbreaking elimination during Worlds 2022, fans got a glimpse of Canyon and Showmaker returning to their usual selves. Both players had their ups and downs last year, but when push came to shove both stepped up at the right moments. Also, they are the only two remaining members from the 2020 World Champion roster, as Jang "Nuguri" Ha-gwon retired from pro-play just last month, not to mention the loss of Kim "kkOma" Jeong-gyun.

DWG KIA fans will have to hope not only for Canyon and ShowMaker to be on top of their game but also rest of the roster. Despite the amount of talent in the rest of the five-man roster, we’ve seen all of them have dips in their performances. At least, Deft and Kellin are coming in on the back of good performances at Worlds 2022, but the same can’t be said for Canna. DWG always had a top side focus as a team, and they will need T1 Canna to show up, not the disastrous version of NS Canna.

KT Rolster in 2022 were one of my favorite teams to watch, and my expectations only grew in this off-season as I think they made some great acquisitions. First of all, really glad to see Bdd get another shot in a promising roster even after the disaster that was the 2022 Nongshim RedForce. He was one of the best mid laners in LCK and there is a good chance he can get back to where he was during Worlds 2021.

We also finally get to see Kiin in a team other than Kwangdong Freecs, previously Afreeca Freecs. Due to his loyalty to his org, one of the best top laners in the region spent the last five years in a team that just couldn’t take the last step toward contending. And last but not least, Aiming will get a chance to play with a top-2 support in the league. He and Life were great last year, and I can’t wait to watch him lane with a player like Lehends. 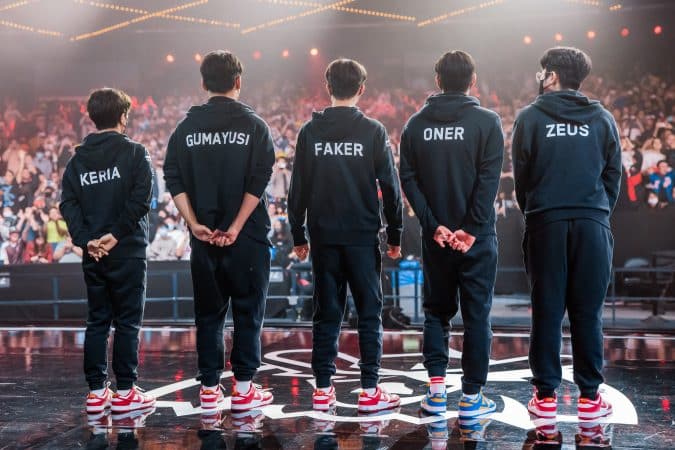 If this was a regular power rankings, it would be hard to justify putting T1 anywhere other than first. The Spring 2022 champions and the finalists from Summer 2022 and Worlds 2022 are looking to win it all, this time around.

T1 made no roster changes. Not that they needed any, or anyone expected them to do any. Every player in this roster was at one point considered the best player in the LCK for their position. Not to mention they are always a treat to watch. From Oner’s aggressive top lane picks to their dominant bot lane, especially with Gumayusi turning back the time to Spring at Worlds. T1 might not get another undefeated split, but it is almost guaranteed that they will be on top of LCK once again.

After their Chovy/Deft roster got eliminated in quarters at Worlds 2021 and disbanded and after they finished dead last in Summer 2022, not many LCK fans were expecting HLE’s next move to be creating a “super team”. Not only HLE signed both solo laners of 2022 World Champions DRX, Kingen and Zeka, but they also brought back their former bot laner Viper from LPL’s EDward Gaming, who is another World Champion.

Zeka was already going to be a must-watch player after his breakout performance at Worlds 2022, where he shone against any mid laner he played against. But to pair him with the Worlds Finals MVP Kingen and the homecoming king of the LCK means fans cannot justify not tuning into Hanwha Life games next season.

This team also is quite different from other big ambition projects. When fans and analysts talk about super teams, they usually refer to good to great players with a lot of experience already under them coming together. But we should keep in mind that Kingen and Zeka, and even Viper, are still very young players. And two good players around them in Clid and Life, this team promises a lot of entertainment for the next year.

2023 LCK Spring Split schedule and where to watch

There is also the new announcement from Riot about the new broadcast times for their major regions. All in all, LCK will probably be on from Wednesdays to Sundays, starting at the times below.

Fans can watch the English broadcasts for LCK both on Youtube and Twitch.

For more LCK and LoL Esports coverage, follow us on ESTNN.