ESTNN got an inside look into Upper Deck’s position in esports.

Recently, ESTNN had the chance to sit down with Upper Deck’s Director of Gaming, Bubby Johanson, and talk esports, NFTs, COD League and much more. The full video interview can be found below.

What made Upper Deck venture into esports?

I've been a gamer my whole life, you know, I started on Texas instruments computers back in 79’. That's how far back I go. So I started seeing the rise of esports in 2010/2011, so I was trying to work with Jason Masherah, who is now our president, back then he was a brand manager. We've always been trying to find that right partner for the longest time, and Blizzard was that first partner that we could actually work with and have that same synergy.

Especially in the U S, you’ve seen stores like Target and Walmart are getting overwhelmed by people trying to get Trading Cards. People just have this need, this desire to have these collectibles to get closer to the sports that they love. Whether it be the NBA, Overwatch league, NHL, Pokemon cards, there's things that they want to collect and share With this pandemic going on the need to be alongside somebody else with similar interests has grown. So you see trading cards with communities that are growing, esports communities are growing. Those two things go hand in hand,  so now we're seeing that growth on both sides.

Spokesmen that we have right now, Michael Jordan, LeBron James, Tiger Woods, we deal with the people that are ambassadors to their sport, they're the pinnacle of excellence in their sport. Soe has been a mainstay with Overwatch league since the beginning, she's been a part of every broadcast and what she does for the league, what she does for the community, what she does for the fans, just you can't beat it. So we had to find a way to work with her in some way, shape or form. So being an exclusive spokesman for us means that you're exclusive to Upper Deck when it comes to trading cards, autographs, memorabilia, in addition, she's going to help us promote the league and the cards herself as well. We can't be happier to have her on board. She's an amazing, amazing person.

How did your partnership with Activision Blizzard initially come about?

We did a World of Warcraft trading card game with them back in 2005. Over the years we've always had that relationship there, but more recently, we tried to align up with the esports side of it. We reached out to Blizzard and they reached out to us kind of simultaneously with an interest to be part of their inaugural Overwatch league. We were talking to them probably a year before the League even got developed. So we were there from the ground up. It was cool watching them develop their league, and they helped to develop our cards alongside us. So it was pretty cool to see, but we've been working with them for over a decade now.

Given your already existing partnership with Activision Blizzard, could we be seeing Call of Duty League trading cards in the future?

It makes sense... I can't speak on that yet. But it's definitely something that we're looking at and interested in doing.

The Future of Upper Deck

Other than the CDL, would you be looking to venture into more esports?

Oh definitely, already we’ve partnered with FaZe Clan. There was a drop on NTWRK that we did a few months back that was a collaboration between NTWRK, FaZe Clan, and Beats. We did some cards for that, Adapt was in there, Temperr was in there. We've been talking to a lot of leagues, a lot of teams, a lot of individual teams to try to get something going. It’s a little bit harder than you would think it is to try to get these things going. But we're trying.

Upper Deck has a lot of relationships with traditional sports athletes, and you see a lot of people from the NBA, NFL getting into esports. So we’re trying to show that esports is a sport, you know, it really is. So seeing these athletes get in there makes it a lot more mainstream, and that’s what we’re trying to push. 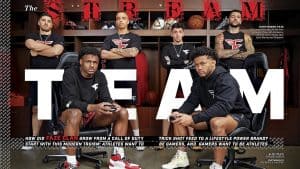