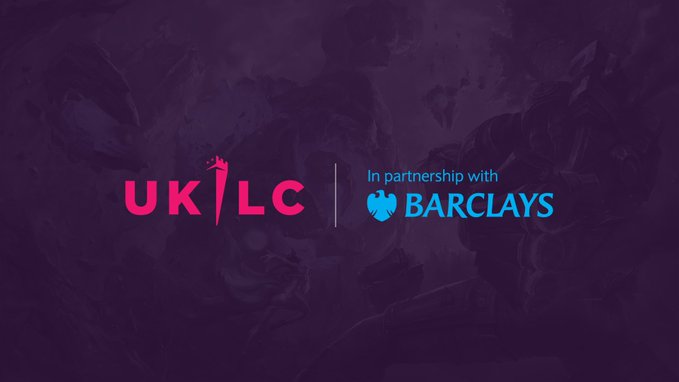 The UK League of Legends scene is coming back strong.

The UKLC is due to return on June 14th, with the DreamHack run venture also adding Barclays bank as a headline partner for the event.

DreamHack has dropped plans for the 2020 UKLC Summer Split. It will boast a prize pool of £20,000 with the top two sides competing to join the newly announced Northern Championship (NLC). They've also announced a new headline partner in Barclays, meaning the UKLC is in for an electric second split.

The league will be made up of eight teams, six of whom will be invited. Demise, Enclave Gaming, Barrage Esports Academy, MnM Gaming Academy, NVision Esports, and Munster Rugby Gaming Academy are those with direct invites. Meanwhile, the remaining two sides will come through two qualifying events in June.

It all starts on June 4–5 with the open qualifying event before the closed qualifiers get underway between June 6–7. Formats for the events are yet to be decided, as well as signups for the open event. However, the closed event will feature three teams from the open qualifiers and five organizations invited via other UK based tournaments. Three slots are available via the UKEL, and one each for the NSE and NUEL.

Michael Van Driel, Chief Product Officer at DreamHack AB had this to say:

“At DreamHack we are firm believers in mobility for teams and new opportunities, so we have created a system or successor to the Forge of Champions to allow new teams to enter the UKLC.”

Banking on a Partner

The second announcement from the UKLC comes in the form of its new partner, Barclays. It’s the first time we’ve seen a major UK bank get involved in UK esports, some it comes as quite a coup of the UKLC.

Barclays is one of the cornerstones of the London financial district and is one of the leading investment and highstreet banks in the UK. With the current climate around marketing in this COVID-19 times, it’s little surprise that a major bank is looking to sponsor a grassroots esports event in its home country.

We are so excited to announce we are partnering with @DreamHack to present the UK League of Legends Championship summer 2020 Split #UKLC https://t.co/oGcomjiJWU