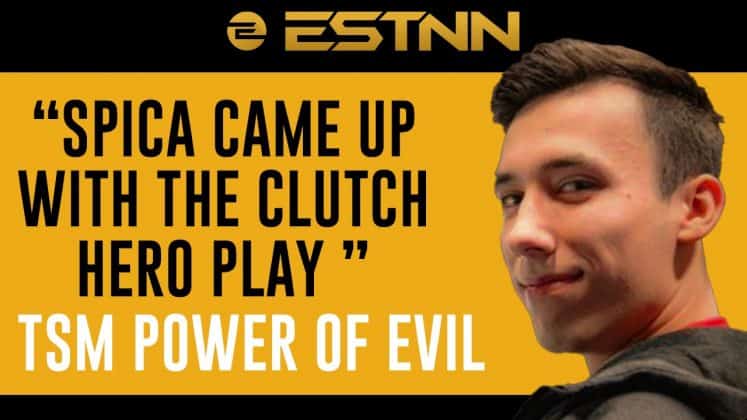 A week ago, TSM took a rough defeat against Team Liquid and was forced into their “comfort zone” of the Lower Bracket. Fans were hoping to see a more polished team take the Rift, but at times, it felt that TSM stumbled across the finish line. Following TSM’s 3-1 series win, we sat down with Tristan “PowerOfEvil” Schrage to discuss his thoughts on the series and what the team needs to do to challenge for the Mid-Season Showdown crown.

We’re joined by TSM’s mid laner PowerOfEvil after their win against Evil Geniuses. How are you doing today?

I’m good! It was a stressful series but I’m happy we pulled it out with a 3-1 victory.

Of course! If it's stressful for you guys, I think you know it was stressful for fans too! How was the tone for this series? You lost last week against Team Liquid 3-1, it was kind of close but it showed a lot of misplays from you guys. They weren’t the cleanest of games, maybe Game One was like “this is going to be a 3-0” but you had some slip-ups. How was that for you guys?

I feel like we definitely had a lot of mistakes throughout the series. I wouldn’t say a lot in one game specifically but they were kind of split evenly throughout the games. So we definitely need to review them and get rid of them. There were a lot of bad 2v2’s and random deaths. So we just need to figure these things out and hopefully fix them before our next series against Dignitas or 100 Thieves.

With that, do you think people and fans should be worried about the early/mid fumbles we saw? Or do you think they’re simple enough that, hopefully, you do iron them out before next week?

They didn’t seem to me like huge mistakes. They were more like little judgemental decisions that looked off, or just looked wrong. So we just need to review them and rewatch them and point them out to the individual players. And try to make them see, in a sense, so they can adapt for future games. I don’t think it's a huge problem but we need to be aware of these mistakes and the players need to not do them moving forward.

Last week, we did get the chance to speak to Bjergsen about the team’s mentality and [today] we got to see the team on more comfortable picks. Throughout the drafts, you didn’t like to go for the picks like Rell that have been so strong. Was there a reason for this? Were you just comfortable giving that away and felt you had the right responses for it?

I think we had a pretty good draft. I felt like it was really obvious what both teams tried to achieve. EG, on the red side, chose red side every time they lost, so they really wanted to get the solo lane counter picks. That was their entire goal of picking red side, getting these counter picks on mid lane and sometimes top lane. And they banned the safe mid lane blinds. Obviously, with blue side, your goal is to get the strongest jungler and try to get the safe picks so you can survive the early game and play it out in a stable game.

How was that last game for you? You had some pretty clutch stuns and team fights. I know you tweeted out right after the game “we had some huge team fights” but how was that in the comms? Was it crazy or was everyone calm?

Well, I’ve been playing for so many years now and I started in OpTic shot-calling team fights, so I feel really comfortable navigating the team through team fights. So it was just crazy. The last game was [really focused on] micro-decisions and little plays that could win you the game. It was just a lot of team fighting comps, [with a lot of] “kite back kite back,” “kill this guy,” my stun is in two.” It was somewhat stressful but at the same time, our team fight communication is very calm. Everyone’s saying a little bit then I speak up a lot about how we fight these team fights out. So it felt calm, in a sense.

Roles within the team

That’s good to hear, and I was going to ask you who you would give a gold star or player of the game to in the team for shot-calling and making these types of decisions. Has it been you stepping up in this role or is it more of a “taking turns” type of dynamic?

Talking about responsibilities, how about Spica being able to sneak into that Baron, slap it and Smite it down? I wouldn’t say it saved you guys, the Baron wouldn’t have completely put you out of the game, but it did halt this momentum that EG had.

Honestly, I don’t remember how it came to that situation. I felt like we were in a good spot and we were starting to outscale them really well. But they found some picks on someone, maybe Huni, so they got that 5v3 at the Baron, which was really hard to play out. And it made it exceptional, like I got flanked and didn’t see IgNar coming, so I died. The main thing is here that we got caught, then we died, then we had this very difficult situation. But Spica came out with the clutch hero play so props to him. I think we need to fix the mistake it comes from. But I need to review that, I don’t really remember exactly how it happened, and then I’ll hopefully fix that for the future games.

Now, you mentioned one of your old teammates, IgNar, but you now have two old teammates coming over to NA. You faced Alphari last week, which didn’t quite work out, but you did manage to beat IgNar this time around. How are you feeling about that? Is this the PowerOfEvil revenge story, getting Misfits knocked out left and right?

It's definitely funny. We lost against Alphari, [then] faced off against IgNar and won. So maybe, hopefully, we can make it all the way and make it back up there. And maybe we can face TL and get our rematch. It’d be really fun and I think we would be better prepared so we can take the dub against them.

You were close last year, right? I don’t think some people remember that you actually had the Lower Bracket run on FlyQuest just one year ago. Obviously different team, different setting, but TSM, as an org, did so against you guys [on FlyQuest] too. Are you guys feeling comfortable? Is it really the Lower Bracket comfort zone for TSM or are you still tense? Or is the meme going too far?

*Laughs* I definitely feel like we are not afraid or scared. Every player has had these Lower Bracket runs so we feel pretty comfortable overall. I wouldn’t say that being in the Lower Bracket feels better than in the Upper Bracket. That would be a lie. But it definitely makes the games matter a lot and everyone just needs to put in their heart, right? And give their 120%. If we can make it, we’ll make it.

With that, I want to transition real quick to the last point. You have some very big names on TSM, like Huni and SwordArt, who have played in the LCK and LPL, which a lot of people consider the best leagues in the world. Is TSM trying to recreate any sort of style? It's different of course since you’re in NA and have different styles individually that have to adapt. But is the team trying to recreate something there or is it more about finding your own game style?

I think we’re trying to play to our team identity and our team’s strengths. So, we will not just adapt other regions’ [styles] or other comfort picks. We’ll just play to our own strengths. And if we think certain champions are a little better than others, today for example I don’t think I’ve played Syndra for a week or two, but we actually felt like for this series it might be a good pick against Jiizuke and a safe pick against some of the champions he can pull up with. Which I felt worked out pretty well. And we’ll keep doing that, like playing to our team’s strengths and team identity.

To finish things off, do you have anything you want to say to fans that might be struggling out here and worrying that TSM might not make the lower bracket run?

Well, as you guys can see, we still have some stuff to work on. We’re going to review these games and take as much away from them as we can for our next series. It’s not going to be an easy road but I know all of us are committed and we will try to make it all the way!