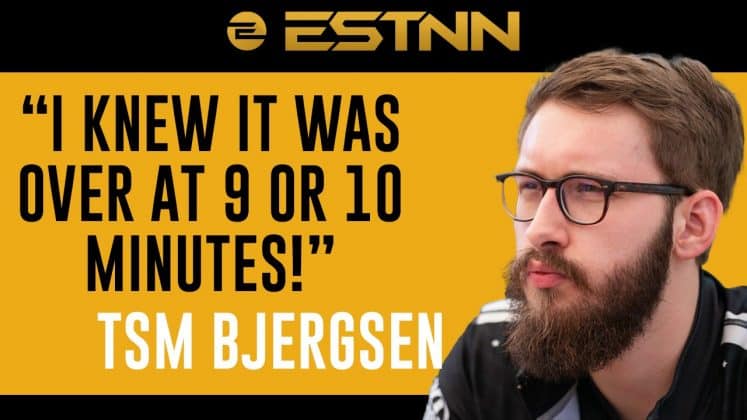 TSM’s Head Coach, Bjergsen, sat down to speak with ESTNN following their loss to Team Liquid in the Mid-Season Showdown.

TSM might have finished second in the regular season but after their series against Team Liquid, many fans will shift their power rankings. TSM went to the lower bracket following their 3-1 defeat to Team Liquid. Besides the one-sided scoreline, some of the games felt a lot closer than that.

ESTNN was able to sit down and speak with Coach Bjergsen following that defeat to get more insight on what he thinks could be improved. As well as what he has felt following the first split as a coach.

Initial thoughts about the TL series

How is the team taking this potentially unexpected loss?

It’s never going to be fun losing, we also just barely lost not too long ago. So we haven't had the chance to talk. I also want to give the players the chance to rest and reflect on themselves before we regroup. It really sucks, but luckily we still have the lower-bracket run as an opportunity.

I think [Team Liquid] played well, they prepared well, especially for the final draft. Their final draft was very strong against us. We just need to prepare better and play better on the day.

On Bjergsen's first split as a coach

Taking a step back, this is your first split as coach, how would you review this split, have you been learning a lot? This is your first opportunity to showcase yourself in playoff, how has that been?

I definitely learned a ton, as probably people can tell from the way the team was very early on, to what the team we have become now, later in the regular season. We are a much stronger team, our drafts are more cohesive.  Obviously, best-of-five is a different beast, where I have little to no experience. We had one best-of-five against Cloud9 back in Lock-in, but we really had no idea what we were doing at that time, what worked for us or what the meta was going to be.

This has been very valuable, I don’t want to say practice, but learning for me. You cant prepare for every single scenario, things are going to shift a lot throughout the series. Anticipating what the enemy team might do is really important and I will definitely do better in our next series.

High expectations for the player-turned-coach

Leading up to your first split, many players and people had the sentiment that you would be a very good coach if you continued your trajectory. What do you think of this or is it something you didn’t care about?

I appreciate the sentiment but no one really knows what I do as a player or as a coach, I could have a lot to do with the team’s improvement, I could have had very little to do with the improvement, You never really know. This just feels very similar to when I was a new player. It’s just an exciting new role for me, I get to learn a lot and I get to have new experiences. It's very exciting for me because that really motivates me to learn and put in the time and really grind and figure out how to improve as a coach.

It just reminds me of my early player days, going into playoffs I was nervous in my first series. I was nervous going into this series as well and how well I would do in draft, in adapting. I think I did okay on some fronts and I made a good amount of mistakes as well, so I will keep working on it.

Last week we saw you notably put “ My B’ after the Evil Geniuses game.

Is drafting something you work on yourself? We know you have a support staff, but do you have a final say on what a composition looks like, come game day?

In preparation, I talk both with Curry and the players a lot and we try to get on the same page on what we want to do, of course, you can never anticipate all the different bans that [other teams] will throw at you. So when we are in the game, the final decision is on me and I need to know what we need for the team comp. Sometimes I make good decisions, sometimes I make decisions like I did against EG. I am very open to taking responsibility for that.

I think that the role of a coach is understanding all of your players, understanding the enemy players and also understanding team comps; and what our team comp needs. There are a lot of things to consider which is why it is important to have a deep understanding. I think its very exciting and a lot of fun for me.

Inside TSM during the TL series

Taking a deeper dive into the series, it felt like TSM came out of the gates swinging, you were in control. What was the team’s mentality after that first game, was there any tilt or was it clear where you had messed up?

It was pretty calm, we had a pretty good idea of what we wanted to change. It was one of those situations where we misplayed some of the later fights that could swing the game to one way or another, it was different for me figuring out how to adapt, there is also such a huge delay for the coaching staff, I didnt even get to watch the end of the game.

Once I got to finish watching the game and spoke to all the players and get their thoughts, we just calmly talked about what we want to adjust [for the next game]. In hindsight that adjustment probably wasn’t the best but I really liked how we tried to adapt for game three and game four.

I think this series was really helpful to understand how we want to draft on this patch. We are going to be on this patch for a while throughout playoffs, a lot of times playoffs is about who has the deepest understanding of the patch.

Hoping for a potential rematch

I think it's really hard to say, I don’t think best-of-fives are easy to predict one way or another, especially when both teams are so close. I don’t think we showed preparation or execution today, I don't think TL is at a different level than us right now. There is a really strong chance we do the lower-bracket run and hopefully we meet them again later and we really show them what we are made of.

I went into today thinking that we would win. Not a 3-0 because I don’t think TL is some sort of fall-over team but I do think we should have been a lot more competitive than what we were today.

Looking ahead for the team

Is there anything you’d like to say to the fans? Maybe a Zilean sometime soon.

I think Spica kind of cursed us and said “Oh there is a lower bracket? I guess we’re gonna do the lower bracket run” and that's where we are. Honestly, I believe more in this current iteration of TSM than I did of my team in the summer split. I was really surprised we even ended up winning, that really shows you can improve in a short period of time. I think the preparation for our match didn't quite go as expected, and now we have a much more realistic idea of how we should prepare.

Asking a coach, we know the ambitions are to become champions and go to Worlds, is that your mindset or are you taking it one game at a time?

Thank you so much for your time and best of luck making that lower bracket run Spica memed about. Is there anything else you would like to say to TSM fans?

I know it sucks to watch us lose, I hope we get to play TL again and get revenge for you guys. I know this was a hyped matchup and we didn't deliver this time around and I know what we did wrong leading up to the matches, the mistakes we made and I made during the series and I will do better to give you guys better results.

You can catch Bjergsen and TSM again on Saturday, March 27 when they go up against Evil Geniuses in the second round of the Mid-Season Showdown.