The Top 10 Fortnite Players in the World 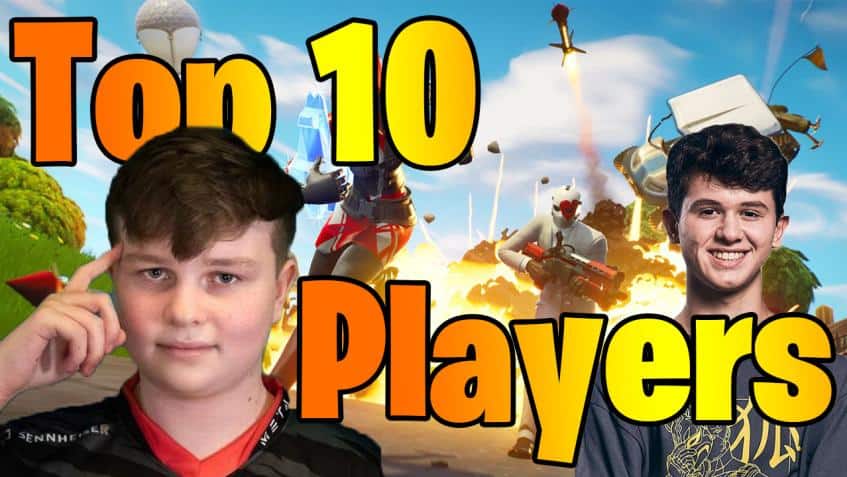 Kicking off our top ten is Rocco “Saf” Morales. This Ghost Gaming competitor is a journeyman in competitive Fortnite. Alongside his duo partner Williams “Zayt” Aubin, they’ve achieved some impressive results since the beginning of competitive Fortnite. Saf and Zayt took second at WSOE 3, following that up with a win at the ESL Katowice Royale in early 2019. Their recent successes include a fourth-place finish at the Fortnite World Cup and several high placements in both Fortnite Champion Series competitions.

As you can see, Saf is one of the more talented players on the Fortnite competitive circuit. He is particularly fantastic at controlling high ground and tracking opposing players through the chaos beneath him. Saf always seeks eliminations and plays well off of his teammates, which is precisely why he and Zayt complement one-another so well. The Ghost Gaming player is easily one of the best out there today.

Zayt of NRG Esports is a veteran in the short history of Fortnite Battle Royale. It seems as though he’s been to every competitive event and has always performed well. He won an early LAN event known as the ESL Katowice Royale with long-time duo partner, Rocco "Saf" Morales. Zayt double-qualified for the Fortnite World Cup, both as a solo competitor and with Saf as his teammate in duos. The results at the World Cup were impressive and Zayt and Saf took home fourth place for their efforts. Zayt has continued to dominate both iterations of the Fortnite Champion Series and there is no sign of that stopping.

Confidence defines Zayt, and he truly believes that he is the best Fortnite player in the world. This type of mentality breeds results, as we have seen in the past. His streams are few and far between with the goal of not to lend a competitive advantage to his opponents. Nevertheless, Zayt’s skills, mixed with his outlook on competitive Fortnite, is a lethal combination.

For those who don’t know, David “aqua” Wang is one of just three players who can call themselves a Fortnite World Champion. Back in July of 2019, aqua qualified along with his duo partner, Emil "nyhrox" Bergquist. These two managed to shock the world by rallying for a Fortnite World Cup victory by just four points. aqua parlayed this into a Season X Championship with Stompy and Tschinken continuing his impressive record.

aqua’s relentless pressure and high ground control make him a difficult obstacle for any opponent to overcome. W-keying is sometimes crucial in Fortnite, and aqua seems to have mastered the art of it and uses it well. He has a certain way about not letting off the gas pedal when in pursuit of an opponent that is disengaging. aqua is unique in that his playstyle can mesh well with seemingly any mixture of player.

Competing out of Austria, Klaus “Stompy” Konstanzer is a standout European Fortnite player. The measuring stick for a complete player is the Fortnite World Cup, where Stompy managed to qualify for solos and duos. He ended the Fortnite World Cup with a 25th place finish in duos and 14th in solos. Stompy only improved from there as himself, Tschinken and aqua would go on to crown themselves the Season X Fortnite Champions.

Despite his shortcomings, Stompy consistently finds himself atop stacked leaderboards. He does so with his editing, building and precision aim. His highlight packages include some pinpoint shotgun blasts and shockingly precise edits. Stompy’s skill set is precisely what all aspiring Fortnite players can only hope to possess. For this reason, Stompy’s been able to elevate himself as a top European competitor.

Dubs is a special kind of player who exudes confidence every time he loads into the Battle Bus. He managed to go from a relatively unknown player to a FaZe Clan member in around two weeks. This recognition of talent took place during the Fortnite World Cup Qualifiers, where he qualified multiple times for solos and once for duos. Dubs went on to achieve a seventh and 15th place finish in duos and solos, respectively.

Most of Dubs’ Fortnite skills come directly from his understanding of the game. He knows exactly what he needs to do in each situation, and relies heavily on what the current Fortnite meta provides. Dubs makes a habit of controlling high ground and raining fire on those beneath him. He is one of the absolute best at dictating where he and his teammates should be to lock up the win.

Mitr0 is an European player who has finally received recognition after grinding and putting in work. Although underrated in comparison to his counter-parts, benjyfishy and Mongraal, Mitr0 is no slouch at Fortnite. He’s been competing in the Battle Royale title since August of 2018, and has several wins to his credit. One of his notable accomplishments was sixth-place finish in duos at the Fortnite World Cup. He also helped form one of the most dominant trios in Fortnite history with the previously mentioned Mongraal and benjyfishy.

Much like Mongraal, Mitr0’s edits are some of the cleanest and most technical in the competitive atmosphere. Mitr0’s ability to accurately navigate build fights and to win box-fights outright sets him apart from other professional players. He always managed to find success in tournaments, which shows exactly how talented he is.

Shane “EpikWhale” Cotton is one of the most systematic and strategic competitive Fortnite players in the world. He allows his mind to dictate split-second decisions, and this typically leads him to victory. EpikWhale double-qualified for the Fortnite World Cup, producing one of the better overall performances. He took third place in solos and 12th in duos with his partner, 4DRStorm. EpikWhale went on to decimate all NA West opponents in the Fortnite Champion Series with Symetrical and Leno.

EpikWhale sees the game of Fortnite different from everyone else and it shows. He’s mastered the art of editing and building, which essentially allows him to feel the flow of each end game. EpikWhale’s ability to think quickly and react enables him to maintain his outstanding bag of tricks.

The Fortnite World Cup Solos Champion has earned his stripes as one of the world’s best Fortnite players. Kyle “Bugha” Giersdorf is a generational talent, and just so happens to play Fortnite competitively. He won the first-ever Fortnite World Cup Championship and walked away with a cool $3 million to show for it. Bugha always lingers at the top of both Fortnite Champion Series and Cash Cup leaderboards, staying more consistent than anyone else in NA.

Not many understand Fortnite better than Bugha. His concept of rotations and constant spatial awareness are just a few things to admire. Bugha is almost always two steps ahead of his opponents and is technically proficient as well. Despite the randomness involved in Fortnite, Bugha is always striving to better himself and does so with each passing week. We can expect Bugha to secure even more championships to build on his already astounding resumè.

The growth of Mongraal as a player happened right alongside Fortnite itself. He began his days playing through the Friday Fortnite tournaments and quickly evolved into one of the world’s best players. Mongraal’s double-qualification for the Fortnite World Cup was impressive, but his following performance exceeded that. He placed sixth alongside his long-time duo partner, mitr0, and went on to finish in a respectable thirteen place in solos. He’s been dominating the European scene since which includes several first-place finishes in the Fortnite Champion Series with the likes of mitr0 and benjyfishy.

What stands out about Mongraal is his passion for the game of Fortnite. He is continuously improving and is always looking for players that can complement his skill set. Many recognized Mongraal as one of the quickest editors in professional Fortnite. Only a few select players can best Mongraal in a box-fight. More often than not, Mongraal will confirm an edit and send you packing back to the lobby. Although his temperament can sometimes get the better of him, Mongraal is one of the best players in Fortnite hands down.

NRG benjyfishy is a player who is in a class of his own. His skills speak for themselves and have carried him to some high-profile placements and victories. This young United Kingdom player has accomplished nearly everything possible to date in competitive Fortnite. One of his most notable career accolades is a double-qualification for the Fortnite World Cup. He went on to place 25th and 14th respectively in solos and duos alongside fellow NRG Esports teammates, MrSavage. Most recently, Benjy dominated the first-ever Fortnite Champion Series along with teammates Mongraal and Mitr0.

Benjy is one of the more technically proficient players in Fortnite with his seamless edits and impressive high ground retakes. Just watching his gameplay will make you question how any person can maintain such a polished skill set. His technical skills mixed with a level head makes for a complete player. He’s got quite possibly the most upside of any current professional Fortnite player.