The last two weeks have been busy on the pro-scene as January marks the traditional start of the StarCraft II season and our friendly neighborhood statistics aggregator Aligulac has captured those games.

The sample size this period is flush with games, sitting at cool 4268 games played by pros and semi-pros alike, collected over a two-week period with a sample population of 718. The sample population is a lot larger than usual as the qualifiers for IEM Katowice XII finished wrapping up, and it is reflected in these numbers. 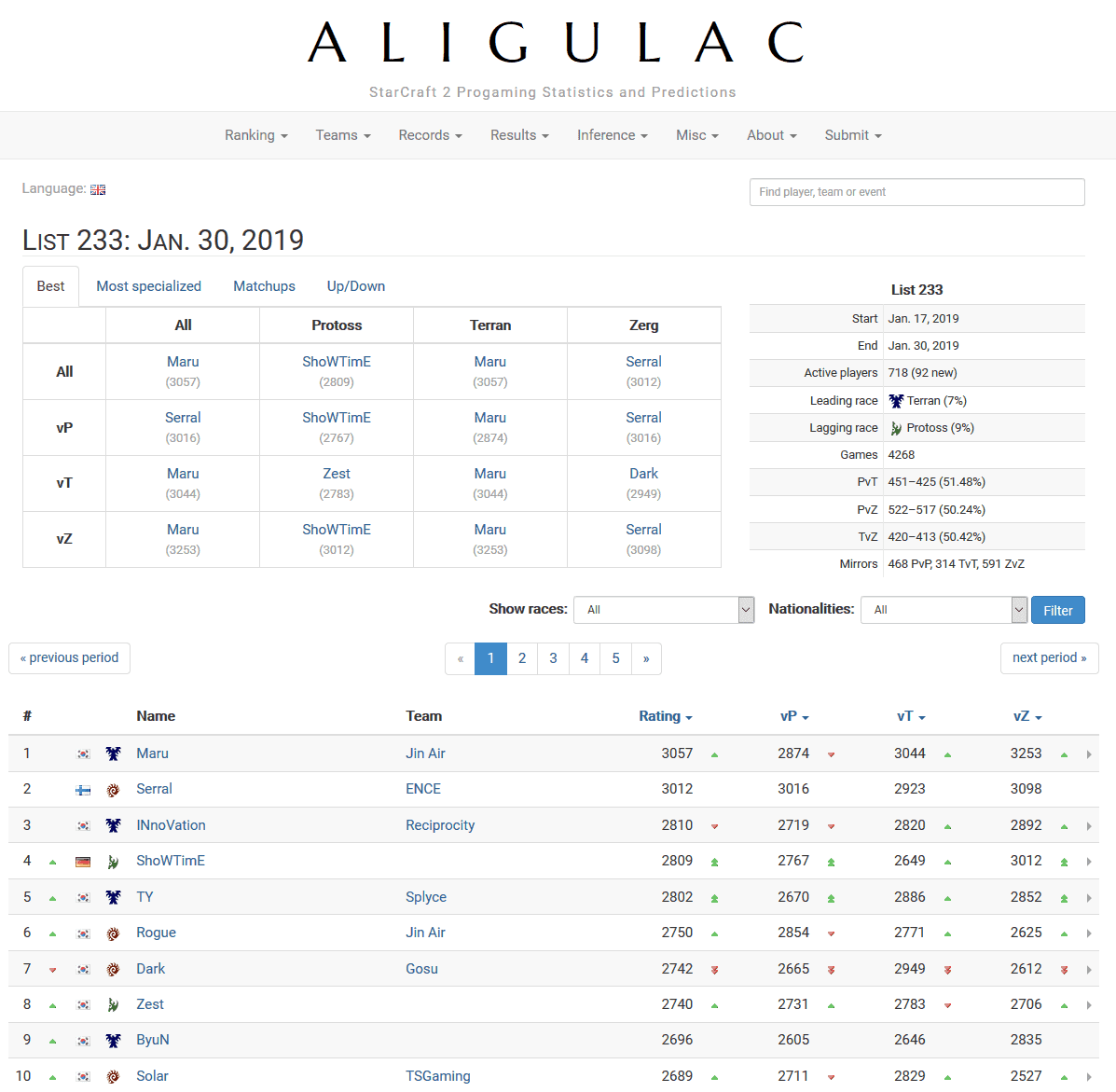 According to Aligulac, as of the last period, Maru is. Serral hasn't been playing very many games lately, and the last ones that we've seen him play, he's been playing as Terran, his off-race. This is probably because Serral is the current world champion, so he doesn't need to compete in any qualifiers as he's invited to compete in most tournaments automatically. Also, Serral is a foreigner (A foreigner is player based outside of South Korea as the professional StarCraft is headquartered there), so he doesn't compete in GSL. This also means that when Serral does eventually play, no one's going to know his builds, which you could say, gives him a slight advantage.

However, not playing against pros will also erode his skill. While I'm sure he's probably practicing on ladder and/or with friends, it doesn't seem like Serral is really all that concerned with practicing at the moment. Meanwhile, Maru and INnoVation are both working very hard. StarCraft II is a game of skill and the longer a player goes without playing, the more his skill deteriorates.

We'll see soon if Serral has what it takes to remain #1 when IEM Katowice XIII begins on February 25th.

On the upper right, you'll see the list of 233. As I've already reported, the current sample size is gathered over 4268 games from a pool of 718 pro and semi-pro players. As a reminder, unlike other survey sources such as opinion polls, this sampling is based off of the recorded results from players playing at the highest level of StarCraft II, which means that while this is not predictive of the player-base at large, it is predictive of the meta to follow as these are all expert sources.

Well, the whole leading/lagging races thing is just a predictive tool to determine which race is most likely to win in a match and does not account for individual player strengths. To determine who the leading and lagging races are, imagine the results of the top 5 players of each respective race being combined into one player and having those players play a battery of games against each other to determine which race is most likely to win against other race match-ups. The winner is the leading race and the loser is the lagging race. It is therefore NOT an indicator of game balance, but how rather how the meta is shifting based on how the most dominant of each race is currently performing.

If you look at the chart showing the statistical percentage of specific race match-ups, you can see that Protoss is expected to win 51.48% of the time vs. Terran, 50.24% of the time against Zerg, and that Terran is expected to win 50.42% against Zerg. Based on these results, the game appears to be balanced, though Protoss is still currently the strongest race, but only slightly.

This is the first period since the January 22nd balance change went through, which in my opinion, was overall poorly thought out and hastily implemented. You can check out why here. so stay tuned and keep an eye out on the balance aspect on the pro-scene.

And that's it for now! GLHF and I'll see you next time!