Today’s Xbox and Bethesda Games Showcase had a surprising start with an announcement of a partnership as Riot Games Joins Game Pass.

Xbox game pass keeps its place as a good investment for PC owners without a console, with a new deal that brings Riot’s titles to the Game Pass sometime this winter. Although there was no specific date set, the Game Pass owners will be able to enjoy multiple Riot games in League of Legends, Valorant, Wild Rift, Legends of Runeterra and Teamfight Tactics in a short while.

Even though all Riot titles are free-to-play, there is a mountain of in-game content you can get access to if you have a Game Pass subscription. Some of this content can enhance your experience playing these games significantly. The deal includes both PC and mobile-only and mobile-accessible titles.

What are the perks available via Game Pass? 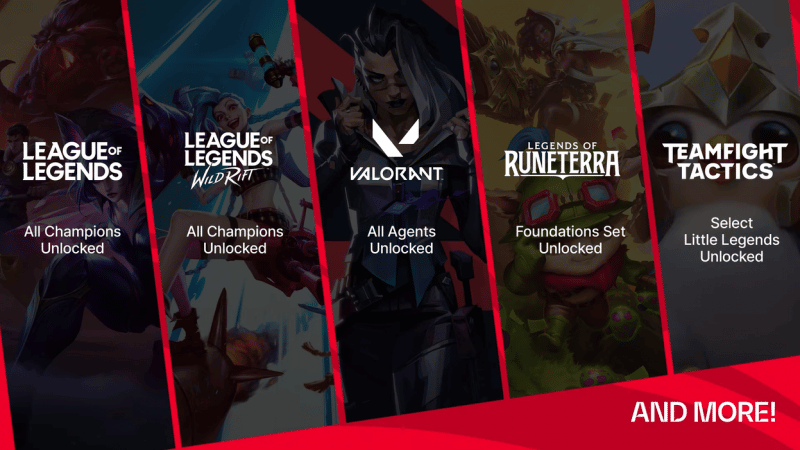 League of Legends is one of the most played competitive games in the world. League is a 5v5 MOBA in which the two opposing teams focus on destroying each other’s base before the other. Currently, in League, there are 160 different champions you can unlock either via Blue Essence (BE), earned by playing or with Riot Points (RP), which can be bought.

With Game Pass, members will unlock all 160+ champions, plus get day-one access to each new champion as it’s released. While this is a great offer for any new player or people who play the game but don’t have every champion. Most long-time players already have all the champions, so this opportunity is mainly to draw in new players from the console space.

For comparison's sake, it would take around $650 to unlock all the Champions League currently have.

Valorant is the second-biggest title Riot currently has, and it is the start of the company's diversification to other genres. 5v5 character-based tactical shooter where players take control of an agent, of which there are 19. You can unlock these agents by reaching certain milestones in the game, like levels five or ten, you can buy them by using Valorant Points (VP), or you can unlock them by completing the agent contracts.

With the Game Pass, members will unlock all 19 agents and get access to all new agents on day one. While Game Pass subscription allows players to bypass the contract challenges for the agents, it isn’t clear yet what happens with the rewards you would naturally get with these challenges.

Wild Rift is Riot’s flagship mobile game, built from the ground up to bring the MOBA experience to mobile devices. Ever since its release, it has been praised among its League’s player base for the quality of its in-game content, even compared to the League itself.

Thanks to the partnership with Game Pass, members will also have access to every champ currently in Wild Rift and once again, all the future releases. An important detail, not every League champion has a corresponding one in the mobile version. Wild Rift currently has 80+ champions, although the team keeps them coming at a rapid pace.

One more thing to keep in mind, the Wild Rift team is currently working on a console version of the game, but they announced delays early in the year and we know it isn’t happening in 2022.

LoR is a strategy card game players use cards of League champions, other characters from the League lore or other parts of Runeterra to unlock synergies and defeat their opponent’s deck. Game Pass members get a head start on this free-to-play friendly PVP card game by getting access to the Foundations Set, which was the first set of cards to be released in Legends of Runeterra.

TFT is an auto-battler where players put together an army of League of Legends characters and use items from the main game. The game is played in eight people lobbies against seven other players, each player being represented by figures called Little Legends. Game Pass members will get access to a rotation of Tier One Little Legend avatars.

More information on the partnership is expected in the upcoming months, and if you would like to stay informed about the subject, stay tuned to us on ESTNN.