With Persona 5 releasing onto almost every platform known to man, let me make this final plea to you to play it!

You never saw it coming

For the uninitiated, Persona 5 was huge when it was released back in 2016 (Seriously? Has it been this long?), selling over 5 million units since then and even getting an enhanced Royal Edition. But let's do some introduction first; the Persona series is a spin-off of the Shin Megami Tensei series, which it has all but eclipsed at this point. While both series still share a lot of their DNA their focus is vastly different. While SMT is a series of very crips JRPGs, Persona ties its quirks into a genre that is almost nonexistent in the west, the visual novel.

The visual novel is a kind of interactive, linear story that the player can influence with their decisions. Usually reserved for dating games, the genre is a huge deal in the east. One of these visual novels is the origin of the popular FATE franchise, which now spans several games, movies, animes, and merchandise. Persona married the concept of the linear visual novel and the Dragon Quest-inspired JRPG and created something wholly unique by its third entry.

A pseudo-Japanese student slice-of-life simulator with a heavy dose of anime antics and the usual end-of-the-world shenanigans of a JRPG. In Persona, you take the role of a student in a Japanese high school and have to balance saving the world with studying, your social life, and all the other things life throws your way. And since you go through the story over the course of a year, the games tend to spread their wings and let you experience its characters and world in a very personal way.

Persona 5 is set in a not-quite fictional city of Tokyo, Japan around 2016/2017, you take the role of a student who's on probation after being charged with a crime you didn't commit. Now you have to live under the supervision of a probation officer in the attic of his coffee shop and behave for one year. Of course, staying out of trouble won't be easy as soon as you are dragged into mysterious, paranormal antics with your friends after an app appears on your phone.

All of this spirals into you and your friends becoming the Phantom Thieves that aim to bring justice to the corrupt adults of Tokyo. All of this while still doing your homework, getting good grades, and keeping your social life in order.

Yes, the prospect of being a regular student in Japan who goes on crazy anime adventures on the weekend sounds bipolar, even on the best of days, but trust me, it works. There is a captivating rhythm here of going to school and keeping up with your friends and chores while also engaging with the supernatural as Persona 5 slowly reveals its grander story. It is a very unique format to tell a story in, but since Persona 5 takes its time, you get a chance to explore the city of Tokyo while meeting all sorts of characters along the way.

The story and characters are of course, the main attraction here since the story is spread over an entire year, you can get quite intimate with many of the game's characters. Be it the enthusiastic Ryuji, the confident Ann, or the enigmatic artist Yusuke. And what makes Persona 5 such a great RPG is that everything you do outside of the dungeon crawling feeds back into it. Getting close to certain characters unlocks benefits like new combat tactics, passive buffs, or the ability to craft useful items. But most of the time, you'll probably just want to hang out with these characters to experience their stories. 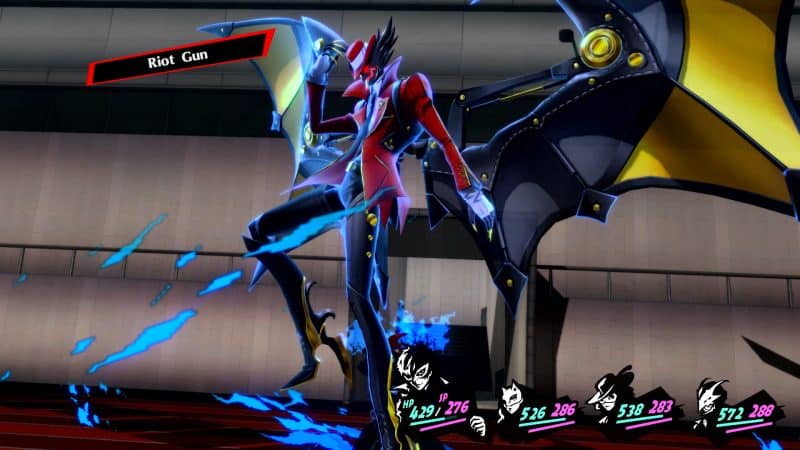 Waking up in the Morning and I Feel Fine

To illustrate this, I will take you through a typical Persona 5 gameplay loop. Something in the story has just happened and gives way to the next set of events; usually, a new villain has just revealed themselves, and it's up to you to take them down within a given timeframe. So now we have about 20 days to beat the villain to continue to story or else we'll get the game over. Of course, nothing stops you from going into the dungeon, crawling right from the start, and taking a 19-day break. But we can also take our time and prepare and take care of other stuff.

Every day will usually start off with a train ride to school and attending class. Sometimes during class, the teachers will actually lecture and quiz you on a subject that will come up in a test later. Getting a correct answer will improve our stats like knowledge which is useful in other activities. After class, we can now decide if we want to hang out with some of our friends, go in a dungeon crawl to level, hit the town for one activity or another to improve our stats or take a part-time job to improve our finances.

It is worth pointing out that something will happen as long as you do something. Virtually every activity is worth doing and progresses you in some way or another. Some relationships might even unlock completely new shops or gameplay opportunities. We should probably talk about these relationships. Because it is one of Persona's standout points and main attractions, returning to its Visual Novel roots.

If you play your cards right, you can have a relationship with many of the named characters in the game, either fostering a friendship or even a romance. For this, you have to hang out with the various characters and you have options here as well by either just spending time with them or giving them gifts. If you spend enough time with the characters you get access to special events that will level up their confidant ranks. These progress a character's narrative (since all the characters you meet come with a story of their own attached to it) and unlock further bonuses and features.

So during these 20 days, you have to manage your time and raise your social stats so you can further progress with the various people you'll meet. So I highly recommend doing this blind, without a guide. Because organically trying to figure out your life while you also have to deal with the manifestation of someone's inner psyche turned into a place you have to steal their utmost desire is the most fun you can have with these games. 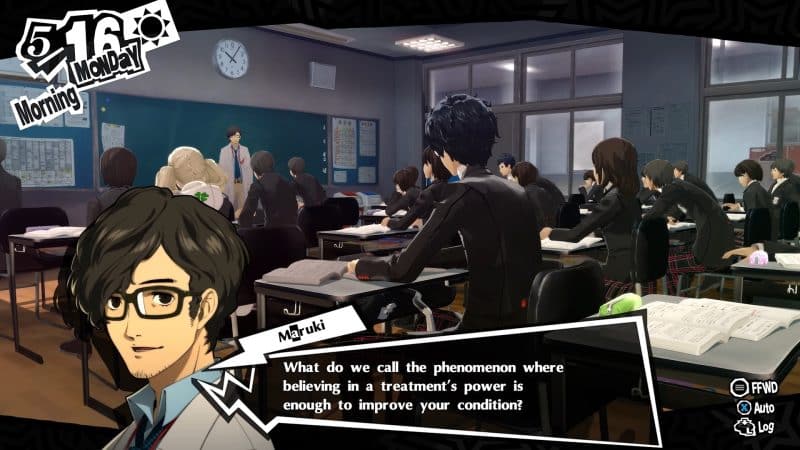 Yea but it's a JRPG though

Exactly! Persona 5 has been dubbed by many to be probably the most beginner-friendly JRPG out there and is a great introduction to the genre if the prospect of turn-based combat and number crunching has never sounded appealing to you. Combat wise, you could compare Persona 5 to something similar to Pokemon. Attacks are categorized into different types of damage and create a kind of rock paper scissor combat system in which every enemy or persona is weak to one element or another.

The twist here is that you're fighting in a party of 4 characters at a time against groups of enemies with various weaknesses. What their weaknesses are is something you have to find out by either trial and error or using abilities to reveal it. All of your characters come with their own Persona, a creature they can summon and fight with as well as some signature abilities. Only you, the protagonist, can change your Persona and switch between multiple during combat.

Exploiting an enemy's weakness will stun them on top of dealing critical damage. So you ideally want to keep them stunned and once you master the system, you can easily stun-lock entire groups of enemies to leave them open to a special all-out attack. This will usually encourage you, the player, to keep mixing up your Personas to cover all the weaknesses your friends can't cover and keep exploiting enemy weaknesses on top of them. Technically you can play through the entire game with just one set team, but it up is the best way to keep combat engaging.

One of the big complaints people have with JRPGs is that combat usually gets in the way after a while. But Persona 5s combat keeps things very simple it just satisfies every single time when you unload a barrage of buffed-up attacks onto an enemy when the music drops its beat.

While I can probably rave on and on about the story of Persona 5 and how it manages to make the prospect of being a student in Japan fun to play, what pushes Persona 5 over the edge is an over-the-top presentation. Seriously, Persona 5 should be something taught in game development courses because its entire presentation still puts most AAA games to shame. The way characters pop out of the screen and move around as you scroll through menus is ridiculous.

It is a game that's deeply in love with its jazz-inspired glam rock and luxurious visuals and is exactly what you'd expect from Ocean Eleven but supernaturally powered teenagers in japan. Combat is just a spectacle and everything about this game is visually just a piece of art. Especially the elaborate dungeons that feel like something straight out of a Zelda game with a very unique urban flair. But you only have to watch the intro sequence to get a taste of it. Seriously, the entire game looks like this, and it's absolutely amazing.

Why the Royal Edition though?

Persona 5 Royal Edition was released initially in 2019 and is not just a fancy upgrade. It is probably closer to a definitive edition or directors cut if we want to use those words. It adds new characters for you to interact with, more Personas for you to find and master, and changes the story in some significant ways by adding an entire season for you to play through as well as revamping most of the dungeons. So if you've played Persona 5 before, this should offer enough of a fresh experience to make another extended visit to Tokyo worth your time.

If I haven't made this point clear enough by now, Persona 5 is one of those generational masterpieces (Honestly, all the Persona games are great, Persona 5 just happens to be the most accessible) that I think anyone with a healthy interest in video games should play. For some, its anime antics might be off-putting at first, but Persona 5, its characters, and its music are so devilishly charming that they'll steal anyone's heart if given the chance.

And I, for one, am very happy that Persona 5 is now available on every major platform, that includes the PlayStation 4, PlayStation 5 (via backward compatibility), Xbox One, Xbox Series X/S, PC and the Nintendo Switch. It's even on the Xbox Game Pass for both PC and Xbox Consoles and runs amazingly on the Valve Steamdeck. There is no excuse anymore! Just go out and play what might've been the greatest JRPG of the last decade.

For more pleads to play good video games, please check us out here at ESTNN