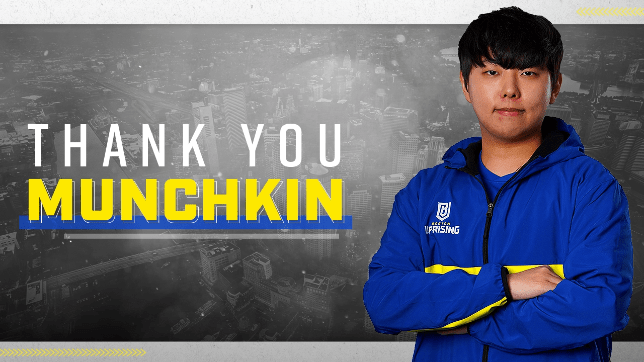 The Overwatch League started only a month ago, and Boston Uprising have already signed the first roster move of the season. Sang-beom “Munchkin” Byeon, the third DPS player of the team alongside Kelsey “Colourhex” Birse and Min “Jerry” Tae-Hui, is leaving Boston Uprising.

Today we say goodbye to @MunchkinOW.

We thank him for his contributions & wish him the best moving forward.

According to the official press release, Boston Uprising said that they had “mutually parted ways” with Sang-beom “Munchkin” Byeon. Moreover, Chris “HuK” Loranger, President of Gaming for the Uprising, stated that the staff “are respectful of his decision to depart from the team and wish him luck in his next venture.”

Munchkin only played for one game this season, when Boston Uprising faced New York Excelsior. Since then, the team favored Kelsey “Colourhex” Birse and Min “Jerry” Tae-Hui as the DPS duo, leaving little to no playtime to Munchkin.

Official: Lucky Future announces the signing of @MunchkinOW , who formerly played for Boston Uprising. They will be playing in Korean Contenders Trials, which starts on March 11. pic.twitter.com/E4irYrC49j

Lucky Future is one of the teams with the most former Overwatch League players. Munchkin will battle alongside former London Spitfire Jong-seok “NUS” Kim, Atlanta Reign’s Dong-hyeong “DACO” Seo and Gi-do “Gido” Moon from Washington Justice. The team is regarded as one of the Contenders team with the highest potential in Korea.

What’s next for Munchkin?

Sorry fans, sorry for letting you hear bad news, I will try to get back to the league as soon as possible and once again sorry

Going back to Contenders is a good opportunity for Munchkin. The Korean scene gathers some of the best Overwatch players, and is highly scouted for Overwatch League trades and new signings. Popping off in the Korean Contenders might give a better shot to join a new team in 2021 — as well as the opportunity for more playtime than Munchkin could have staying with Boston.