We break down the best tips and tricks for playing Ana.

Some people like playing DPS heroes, whereas others prefer tanks because they have a key role in every team. Speaking of key roles, every Overwatch team needs at least one support. This is where heroes like Ana come to play.

Ana is one of the popular heroes in Overwatch, which means people pick her across multiple skill brackets. Even though she's not that difficult to pick up, playing Ana effectively requires a lot of skill. Hence, the hero is often one of the options for professional Overwatch players.

Since many people want to learn how to play Ana, this basic overview shares a couple of essential things you need to know about the hero.

As mentioned earlier, Ana is a support hero, which means she has 200 HP. This puts her in the same position as most other DPS characters in the game.

Ana’s primary weapon is the Biotic Rifle, and it shoots darts. When the hero targets an ally, it will restore 70 HP over 0.6s. However, if Ana decides to hit an enemy, the shot will deal 70 damage over 0.6s. Similar to Widow, Ana also has a scope that she can use to target her enemies/allies.

The Biotic Rifle has 12 ammo, a 1.5s reload time, and a 0.5s casting them when scoping in. Since this weapon deals damage over time (DoT), if an enemy picks a Health Pack, it will cleanse the DoT.

It's important to know that using Ana’s scope will give the hero a severe movement speed penalty. This will help her be more accurate, but it will also give her opponents an advantage because they will be able to kill her much easier.

Ana has a couple of abilities in her arsenal that are strong in multiple situations. One of them is definitely the Sleep Dart because it allows her to disable a given target for up to 5 seconds. Needless to say, Ana can use this against targets who are dangerous in a given situation or simply use the sleep to set up kills.

Sleep Dart is an incredibly skilled ability because it has a casting time of 0.3 seconds. Furthermore, it has a 12 seconds cooldown, so missing it means you have to wait a lot before accessing it.

Once you land your ability and the target goes to sleep, it could wake up after 0.5 seconds if it takes damage.

Ana’s second ability deserving of more attention is her Biotic Grenade. This ability allows the hero to toss a bomb that deals damage and heals allies in a small area. This grenade deals 60 damage and 100 healing, it has 4 meters of Area of effect and a 10 seconds cooldown.

This ability is special because the enemy targets hit by it can’t receive any healing for the next 4 seconds. As for allies, all of them will receive 50% additional healing, even for things like Health Packs.

Besides affecting heroes, this ability also affects targets’ shields. In other words, heroes with shields will either regen it 2 times faster or won’t be able to regen it at all.

The final ability that every Ana player needs to be aware of is called Nano Boost, and it can only be used on one of her allies. Once that happens, the given hero receives 250 HP, 50% damage reduction, and 50% damage for the next 8 seconds.

Nano boost has an 8 seconds duration, 0.15s casting time, and a maximum range of 40 meters. The ultimate can be used in various situations and can be devastating for some heroes. For example, many Ana players often use this ability on things like Reinhardt or Bastion because they can easily wipe the entire team.

After we took a look at the hero’s abilities, it is time to share more information about them and the things you can do to use them. Like most heroes in the game, Ana has certain combos that can deal a lot of damage.

In this case, you need to use your Sleeping Dart to CC your enemy. Once it is sleeping, you can either tell your teammates to focus it or use your grenade, followed by a shot with your gun to do damage. Both things could work, but it depends on the scenario and the target you’ve put to sleep.

Another important thing to remember about Ana is that she is one of few healers in the game that has problems healing herself. In fact, the only thing she can do to accomplish this is to throw a Biotic Grenade. However, once she uses this ability on herself, she won’t be able to use it on her allies/enemies.

In order to save her abilities and deal maximum damage/healing, it is advisable to stay hidden for as long as possible. Taking damage to Ana for no reason can have devastating consequences because you might die a couple of seconds later. Needless to say, this means you won’t be able to help your teammates.

Positioning is vital with any healer, and Ana is not an exception. In fact, this is one of the things that differentiates amateur players from those who know what they’re doing.

Since Ana is a support, people on the opposing team rarely pick heroes just to counter her. However, there are a couple of names in Overwatch that Ana is not good against. Starting with Genji, this DPS can make Ana’s life a living hell because he can catch her off guard. The Sleep Dart is not effective against him because he is extremely mobile and can even deflect it.

Another hero that is good against Ana is Tracer. Due to the hero’s incredible mobility, hitting her is easier said than done. What’s more, Tracer deals insane damage at a close distance, which means she can kill Ana very fast.

Lastly, we have Widow, the offensive sniper in Overwatch. Although Ana has a CC tool and the ability to deal a lot of damage, the hero is not good against targets who stay far behind. Needless to say, Widow is one of the best at this because she has the highest range in the game. 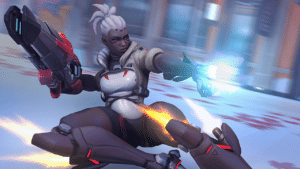 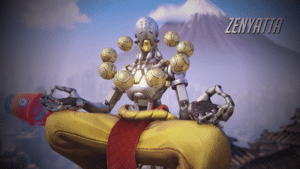 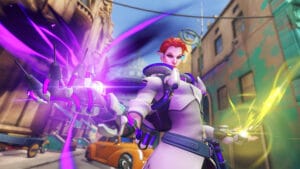