Final Fantasy XIV's 68th Live Letter gave fans a glimpse at the road ahead for the Endwalker patches.

While the new Live Letter offered little insight into what exactly 6.1 is going to be. March 4 will finally give us some answers, with Live Letter 69 scheduled for that date. We expect more info on that to follow soon after. Plus, the one planned for after that will go into even more details, and the eventual release of 6.1. Currently, Square Enix aim to release the patch sometime in April, but that's still up in the air. 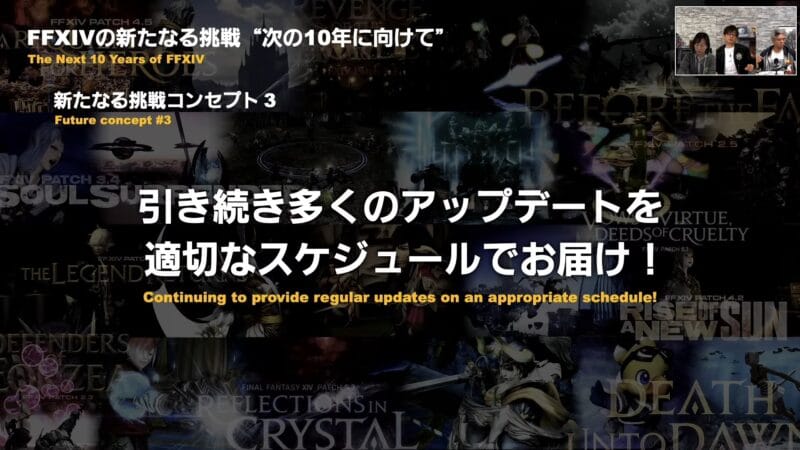 However, thanks for to Naoki Yoshida, we now have a good idea what we can expect from future patches. But please note most of this is still in the early stages of development; so everything we mention from here on out is still subject to change. 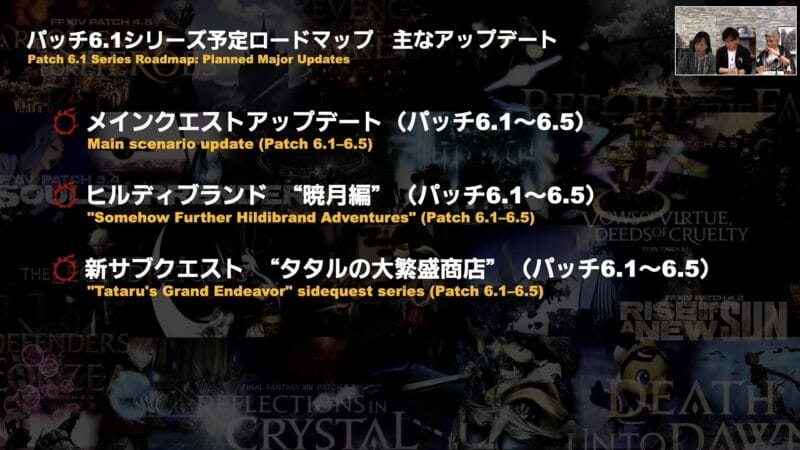 We know 6.1 features a brand new set of Main Scenario Quests leading the Warriors of Light... or well, adventurers, onto a new journey. And while we still don't know where that journey will take us, Yoshida teased in the Q&A they usually let us visit the places they mention in the story. So some players are already left to speculate; Hydaelyn is a big place after all. And so far, we've not even seen a third of it. 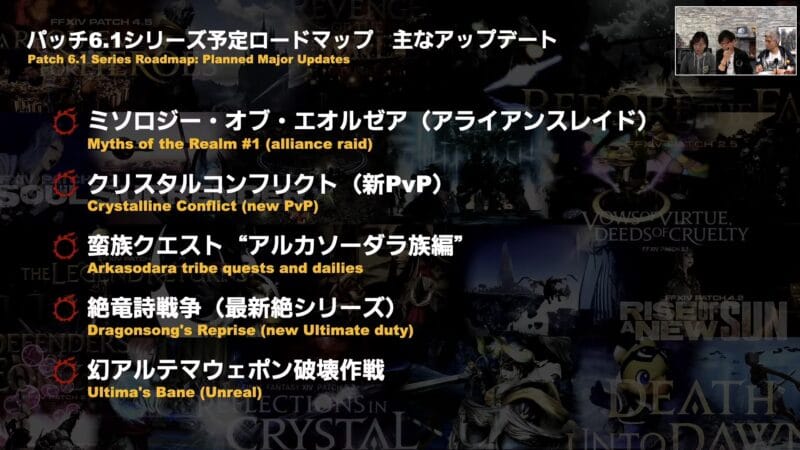 6.1 will also feature the continuation of the beloved Hildibrand questline; who was suspiciously absent in Shadowbringers content. He's definitely overdue for a return with his entourage and their antics. There is also going to be a questline featuring the Scion's beloved coinkeeper; Tataru. While we are not sure yet what that quest will look like, we're certain Tataru will make good use of the adventurers to make even more Gil.

Both of these questlines are planed to continue throughout the 6.X cycle of patches, so please look forward to them.

Plus, there's another set of Tribe quests slated for addition. 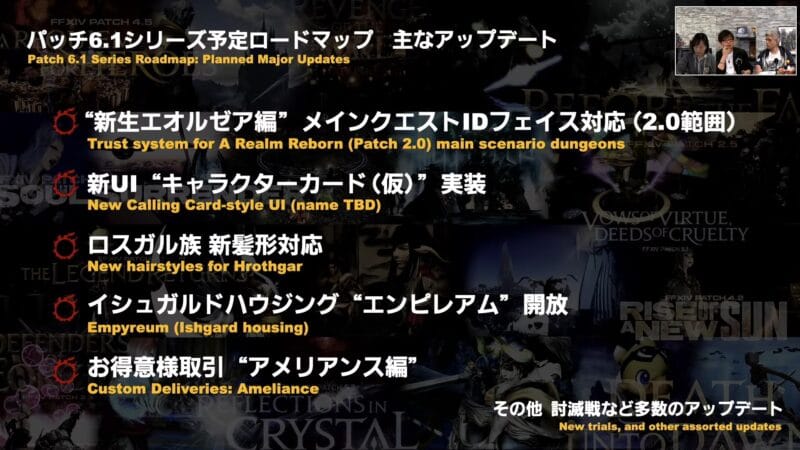 Besides that, we can expect the first of the new Alliance Raids; the highly anticipated new Ultimate; Dragonsong's Reprise. And the return of Final Fantasy XIV's Unreal Trials. We expect more details on that front with the next Live Letter on the March 4.

In addition to this, A Realm Reborn's base content will see the addition of the Trust system for its Main Scenario Dungeons. We can also expect new Hairstyles for the Hrothgar, the release of the new housing district. The new PVP mode, another Extreme encounter, an expansion of the Glamour System and much more.

If we follow the current plan, this patch will release sometime in August/September this year and will open up with the next tier of the Pandæmonium raids. Of course this will also mean a new Savage tier, and with that new Tomestone Gear, Crafted Gear and so on to keep you occupied until 6.4 releases.

There's also going to be a new series of Trials. Which we currently know nothing about. But if previous patterns are anything to go by, they'll also come with a Normal and an Extreme version of the encounter. The Trust feature is also planned to be expanded upon all the way to the end of the 3.0 content. As well as the possible inclusion of the next set of Relic weapons. 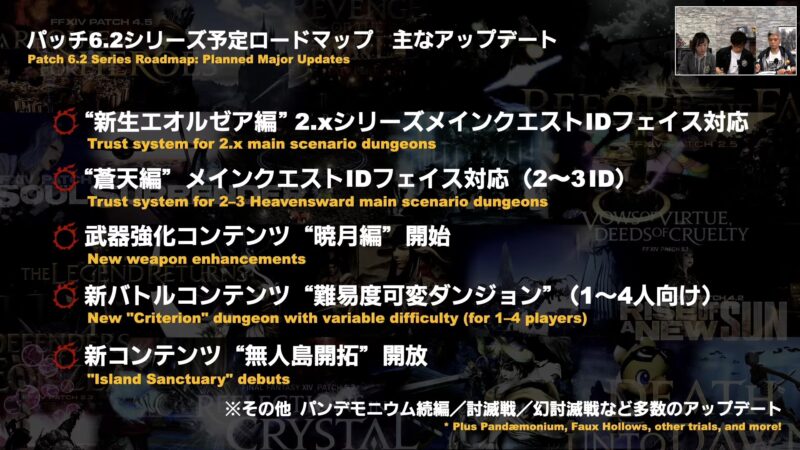 Further more there are two bits of content still currently shrouded in mystery.

First is the Island Sanctuary which Yoshida teased in the past as a different kind of content; meant to be relaxing and supposedly standalone. From what we gather so far,  this might be Final Fantasy XIV's version of games like Animal Crossing and Harvest Moon. But its left to be seen what this content will actually be like. (Still, we're definitely looking forward to it.) There's also going to be something called the "Criterion" dungeon, a new kind of content for 1-4 player's with adjustable difficulty. It might be in the same vein as the current Deep Dungeons, but Yoshida stated that it will be a separate thing.

The release of 6.3, possibly sometime around January/February 2023 should be one of the bigger patches; at least if the projected patterns are to be trusted. This patch will aim to include the Trust system for the rest of the Heavensward content. We can also expect a new trial and its Extreme version and the next part of the Alliance Raid series.

As a surprise however, we have confirmation we'll get at least another Ultimate encounter. Furthermore there will be some additions to the Unreal Trials, updates to the Island Sanctuary content. And finally an addition to the beloved Deep Dungeon content. 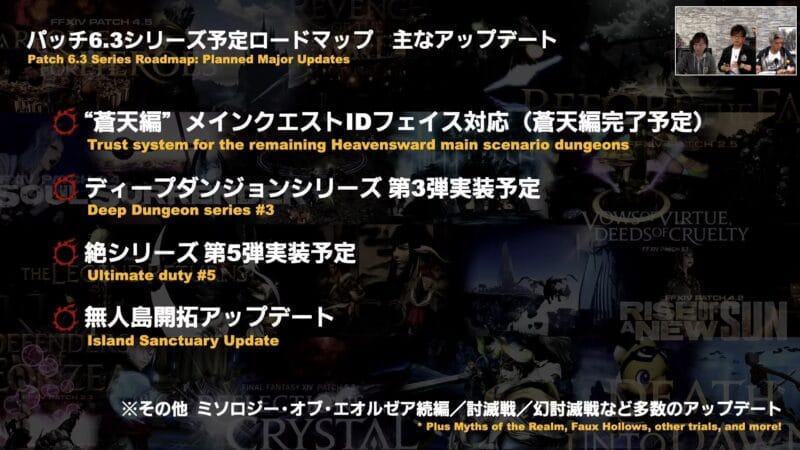 However we don't know yet what will eventually replace the Relic grind content. 4.3 saw the introduction of Eureka, and 5.3 saw Bozja. There is a good number of players that already pine for more of that sort of content, but for now we have to be patient.

While they're currently in the planing phase, we can at least expect the finale to both Raid series, the finale to the Trial series. And the inclusion of even more Island Sanctuary and "Criterion" dungeon content.

Also the implementation of the Trust system to to Stormblood content and much more. During the 6.X series of patches, the Team also plans to add more content to the Gold Saucer. A big update to the Blue Mage content and much, much more. But as of now, it's still too early in the planning phase to make any grand promises. However, Final Fantasy XIV promises to keep its regular schedule of updates and new content. And to continue to surprise its players. 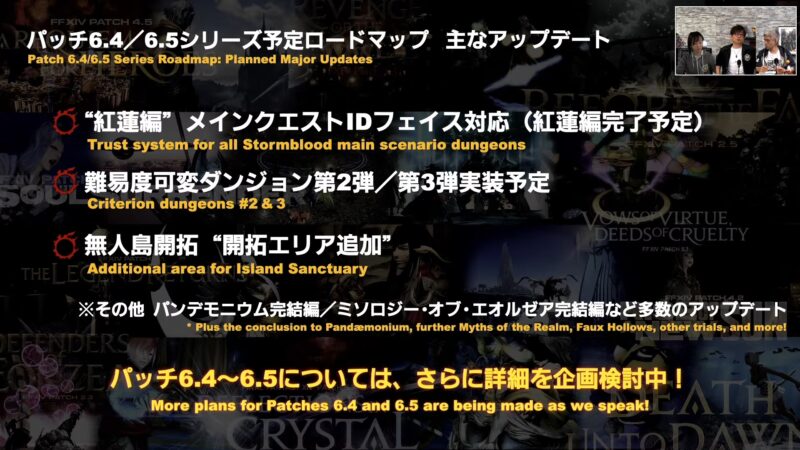 But there is a little downside to all of this. A teeny tiny one that most players will probably not be too bothered by considering what's in store. The regular patch cycle of one patch every three and a half months will be extended to four months in-between patches.

Yoshida specifically asked players to understand, that ever since the 3.X days their workload has increased significantly. And even with the team having seen many additions to their number, he can't make clones of himself yet to handle the workload. There's also Final Fantasy XVI he's working on and its not gonna get easier anytime soon. The two weeks of extra time allows them more wiggle room when it comes to making last minute adjustments. Also it will allow the Team to take more frequent breaks. 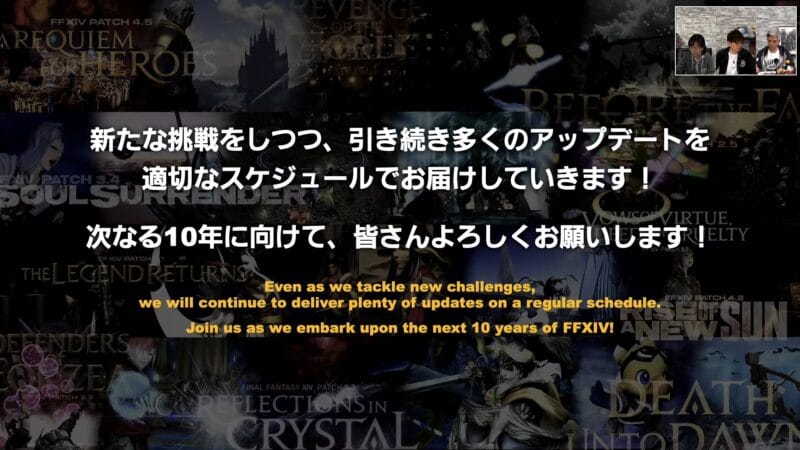 This concluded our summary of the Roadmap, we also have a summary of the graphical updates planed for 7.0 and the gameplay adjustments planned for the 6.X cycle of patches. For more on Final Fantasy XIV, stay tuned here on ESTNN.