Get familiar with New Worlds’ bow, and you’ll be raining down arrows in no time.

Whether it’s Robin Hood or Legolas, following in the footsteps of history and fantasies most famous bow slingers has been a dream for many. With New World, you’ll have another opportunity to live out this dream. In this guide, we’ll give an overview of the bow, and look at two builds that should get you in the right direction.

The bow is a Dexterity weapon, so your best bet is to put points there. You’ll also need to drop some points into constitution if you intend to play in PvP, or you’ll be a sitting duck if people catch you in melee. Look to pick up your faction armor, as this tends to focus on constitution, with it being essentially PvP gear. Dexterity also pairs well with people looking to pick up skinning or make armor with leather as Dexterity will make skinning faster.

For PvE, you’ll need to utilize your range to take down foes. Be that in a group or in solo play. For expeditions specifically, as a range, you’ll need to be wary of aggro. Unlike many MMOs, tanks in New World lack as many aggro gaining tools, and DPS lack aggro reset abilities, meaning taking boss aggro can end in death. There are two key abilities you’ll want in a PvE build – Penetrating Shot and Poison Shot. For the third ability, Rain of Arrows is slightly ahead, however, Rapid Shot can be swapped in. 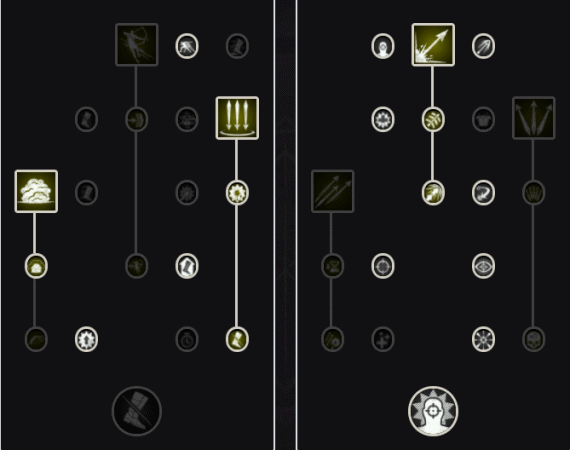 A build using Rain of Arrows

Things stay similar in PvP as they do in PvE, however, rather than adding a second AoE attack in Rain of Arrows, we need to keep ourselves safe. Evade Shot is going to be key, especially if melee opponents get close to you. With the added knockback, and movement speed buff to you after using it, it should give you the breathing room to dish out damage.

Penetrating Shot gives you good single target damage to focus down a key target, while Poison Shot allows you to dish out AoE damage. You’ll also want Concussion in the Hunter tree for the added damage on headshots and the chance to recover an arrow. 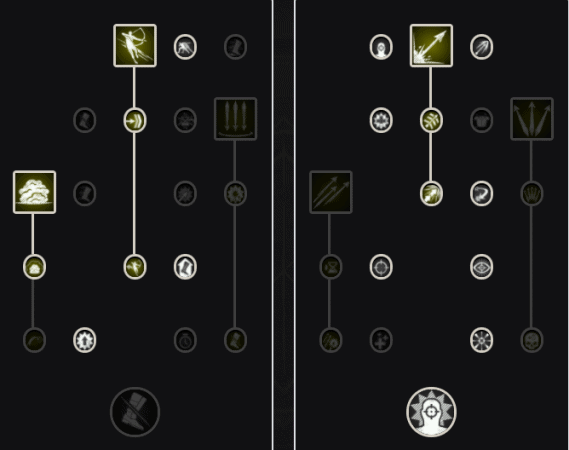 Gems are mostly going to be a late-game focus, as while leveling you can just slot whatever you feel like. However, if you want to have the best, we recommend the ones listed below:

The Pristine Onyx will give you big opening damage, providing you open-up on the target. While the Diamond works best for PvE, especially expeditions as you’ll most likely be max health more often than not. While a 2.5% physical damage absorption is a no-brainer. The Malachite works as an alternative, swapping some physical absorption for elemental.

Rapier — You’ll need to pair a bow with a melee weapon, and the Rapier is one of the best. With swift attacks, a counter-attack stun, and good single target damage. The Rapier is a near-perfect companion to the bow.

Spear — The spear is a more crowd-control alternative to the rapier, while also providing great AoE damage. Spear is a very bleed-heavy setup, so it pairs nicely with the bow.

Hatchet — The hatchet talent, Berserk, provides you with healing in melee, allowing you to hold your own in a melee encounter. This is possibly the best option for those looking to level using a bow.