This is everything that's coming to the game with the MrBeast Fortnite crossover, the skin and a special challenge!

MrBeast has become one of the most recognizable content creators in the world. He’s now also the latest character to join the Battle Royale as part of the Fortnite Icon series. We’ve got a full MrBeast X Fortnite crossover in full in the game right now. There’s a special skin, cosmetics, and even special challenges that players can compete in for a shot at a cash prize.

Mr beast has come to Fortnite in a pretty packed part of Chapter 4. We’ve only just got the Winterfest events and Fortnite V23.10 patch. In between all this content, players will have to try and find time to play through the special MrBeast game mode if they want the free Fortnite cosmetics and a shot at the huge prize pool for this tournament.

This is everything that’s included in the MrBeast Fortnite event. Along with how you can get your share of the free cosmetics through playing a special challenge. 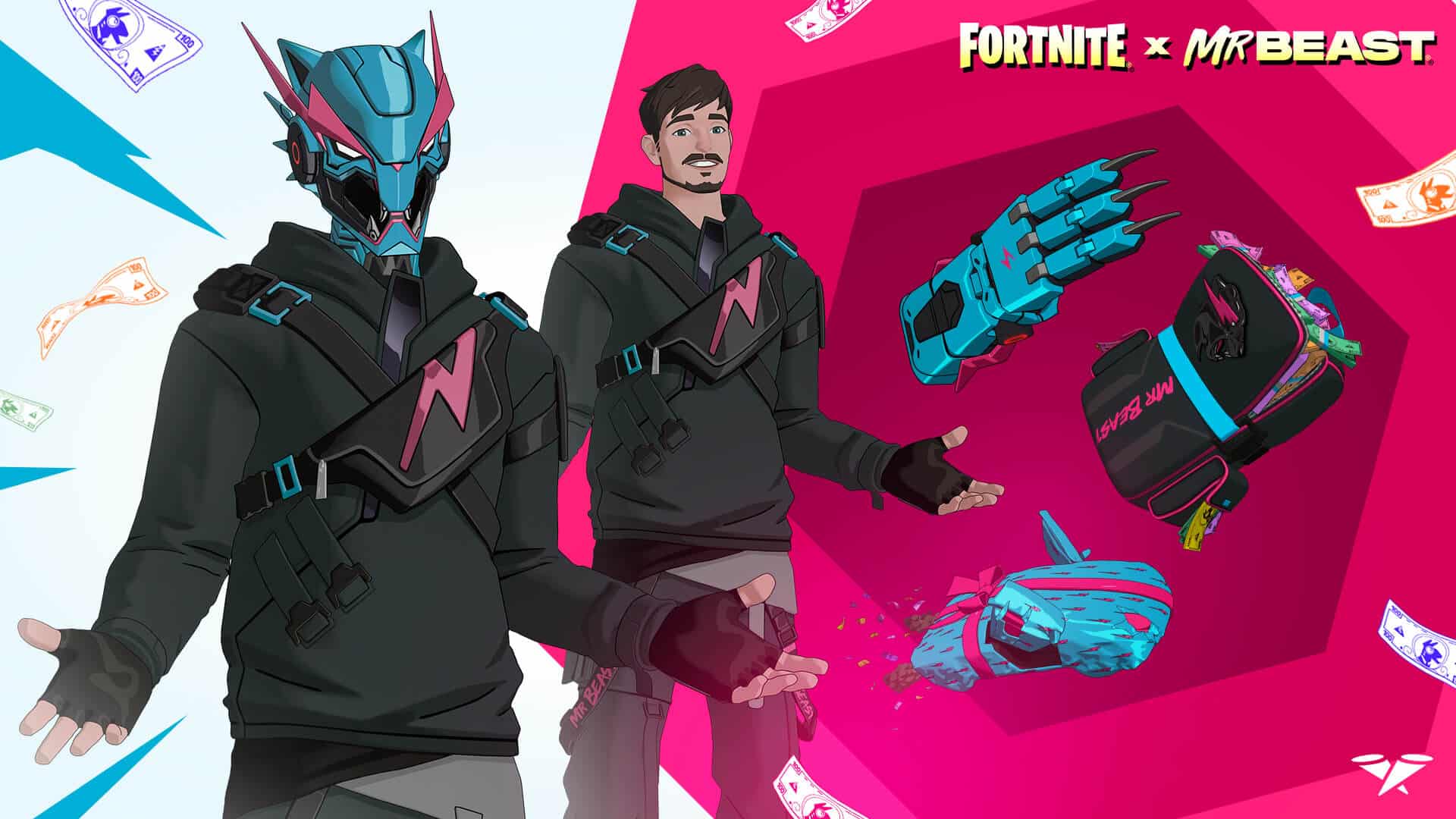 The center point of the Fortnite X Mr Beast crossover is the skins. He’s the latest real-world icon to join Fortnite, alongside sports stars and other content creators. MrBeast probably beats most of these in terms of being the most popular streamers. He’s definitely one of the most recognizable faces on YouTube, and he’s translated into a Fortnite skin pretty well.

There are two Mr Beast skins in the game. MrBeast and MrBeast6000. Both have a slightly different look. These are more on the side of representing the actual person in the Icon Series. Similar to the Bugha skin. While it isn’t the most interesting design out of the store, you can tell it’s supposed to be MrBeast pretty clearly. Some other Icon skins take a more representative approach, so this is a fun inclusion.

There's also going to be an emote that fits the MrBeast theme. These two skins are both going to be available in the item shop!  You can pick them up at any time after they hit the shop December 14. MrBeast is a big content creator. He’s not known for playing Fortnite, though. Instead, he’s known for ridiculous videos where he hands out sums of money to players. This is coming to Fortnite, too, in the form of the MrBeast Extreme Survival Challenge.

The Extreme Survival Challenge is a new map and competitive playlist. You can find it in the creative section. The island is going to host a challenge that starts up on December 17th at 12 PM ET.

The map challenges players to navigate the course. You’ll need to avoid hazards, grab coins and survive as long as you can. As you survive longer, you’ll rack up points. There is an active leaderboard to see which players make it further into the game. If you can come at the top of the leaderboard, you’re going to get a cash prize. The highest-scoring player in total is going to receive $1 million.

This is a huge prize, although only one player is going to get it. A lot of other players are going to get something for competing. The top 100,000 players will get a free glider. They’ll receive the Beast Brella Glider.

You can practice on the island early by going through the island code 7990-6907-8565. The event with players competing won’t start until December 17. Before then, you can get some practice in and ty to master the map though.

You have a shot at a $1 million with this crossover and also the MrBeast Fortnite skin. There are even some quests you can complete too.  These quests will give you a chance to win a couple of extra cosmetics for free. You can’t get the full MrBeast Fortnite skin. However, you can still grab a loading screen and a spray.

The two quests are both tied to score thresholds in the Mr Beast Extreme Survival game mode. If you’re practicing to have a crack at the prize pool, then you’ll be able to pass these milestones pretty easily.

That’s everything that’s coming in the MrBeast Fortnite crossover. This is a huge event for the game. If you want to grab everything you can, you’ll need to fit in some rounds on the exclusive map alongside all of the Winterfest 2022 activities!