As we enter the final day of the MSI group stage, it’s time to find out if Cloud9 can make it out or if another team will rise to the occassion.

With Groups A and Group B now finalized, it was just Group C left. This final group featured DAMWON KIA, who were just one game away from qualification at the start of the day, and three sides who entered the day on 1-3. The three-way battle between Cloud9, FocusMe, and Infinity Esports was fierce as they looked to secure a spot in the Rumble Stage. Esports betting sites currently see DWG KIA as the main favorite to win the event. For the upcoming matches, CYBER.BET, one of the newest esports bookmakers around, offers for a DWG KIA win odds of 1.17 against Cloud9, 1.04 against Infinity Esports and 1.07 against DetonatioN FocusMe. With all this in mind, the final day of the MSI 2021 Group Stage was everything fans wanted and more! 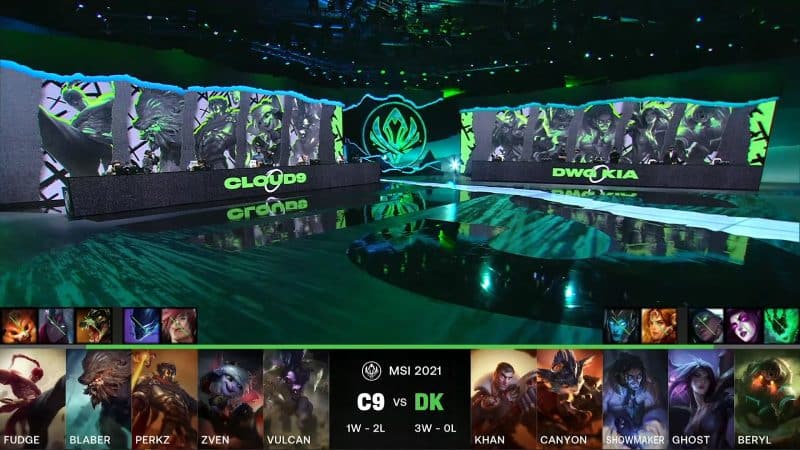 To start off the day, NA representative Cloud9 had the tall task of taking on reigning world champions DAMWON KIA. It wasn’t the start C9 fans would have wanted, as Canyon picked up First Blood in the mid lane. C9 quickly bounced back on the top side, snagging a pick kill for the top lane Lee Sin. After a period of 10-minutes of farming, C9 pounced on an overextended ShowMaker as C9 kept up with the pace of the game. Perkz was then caught out in the mid lane before Blaber makes up for some misplays in previous games by picking up two huge kills in the mid lane. C9 secured yet another kill after taking the Rift Herald and, despite all odds, they moved into the lead.

C9 continued to make big plays across the map. The first big team fight saw a three-for-three overall trade as C9 started to gain confidence. DK started to turn the screw by the 22-minute mark. Here, they found Perkz in a poor position, and while C9 tried to counter-attack, they pulled back as DK moved to 3k ahead. Shortly after, a team fight broke out at the drake, and with both sides posturing, it ended up going the way of DK at the start since they secured the drake. C9 came online in the fight and looked to have turned it. But yet again it’s an even four-for-four as both sides walk away wounded.

C9 pulls off the unthinkable

A bit later, DK moved towards Baron and they managed to secure it before C9 turned up. And it all went wrong for C9. With DK winning the 4v2, ShowMaker was able to occupy four members of C9 as DK moved to a late-game lead of 4k. But DK took another huge risk engaging onto C9 near their own base. Despite a play that looked like a throw, DK once again got away with it as they increased their lead. From this point, the Soul point drake spawned and C9 finally found the fight they needed. They lost the Soul, but with a great fight, took down four members of DK. Seeing their chance, C9 moved to secure a free Baron with only one member of DK left on the Rift.

Empowered with the buff, C9 used the Baron to siege the top and bot lane, taking down the two inhibitors. Then they moved away to take more, with the Mountain Soul drake spawning. Afterward, C9 sieged the mid lane. They take the last tower there down and fend off the DK attack as they took down all three inhibitors. Eventually, DK pulled the trigger to keep their game alive, but it failed. They lost BeryL right away as DK headed back to the fountain. DK re-engage but it’s not good enough, and C9 made a huge statement by taking down DK while they looked to secure a place in the Rumble Stage. 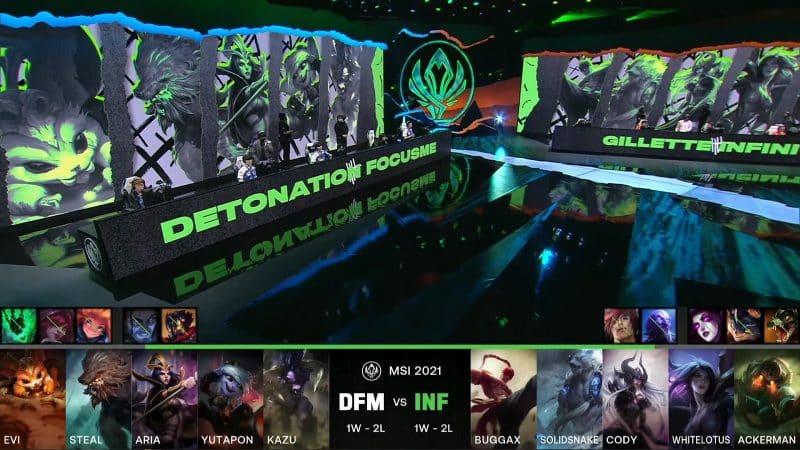 Moving into the second game of the day, both teams needed a win to have decent chances of advancing. DFM took First Blood in the top side after chasing down Buggax in between his tier one & two towers. INF quickly picked themselves up to get a kill on the board, diving Steal under his top side tower. Then, INF tried to repeat the top lane gank, but got caught out by DFM collapsing on the lane. After the fight, DFM dropped the Rift Herald and moved 3k ahead. Not too long after all that, DFM found a massive engagement in the mid lane, where five members dove under the INF mid tower and took down four members in a flash. They chased down Buggax as he retreated but the Ace comes home as DFM moved 6k ahead.

With the lead, DFM just doesn’t relent. By the 20-minute mark, they find themselves on the bot lane Inhibitor of INF who just has nothing to stop them. In the ensuing fight, DFM lost one member, but take two and an iInhibitor for their trouble as DFM looked dominant. Knowing their back were against the wall, INF looked to mount a big comeback play in the top side by catching out DFM. They get an important early kill but they lacked any sort of damage. DFM recovered and Aced INF again.

With the base open, DFM walk inside the INF base and INF cannot do anything to stop it. As the Nexus falls, its huge win for DFM as they look to challenge Cloud9 for second place in Group C. 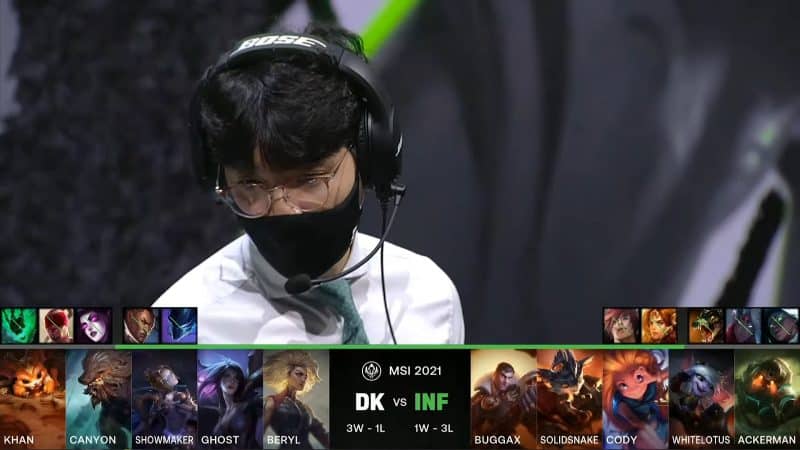 After their upset defeat to Cloud9 at the start of the day, DK started their second game perfectly with a nice First Blood. It got worse for INF with DK picking up yet another kill, though INF was able to get two in return. In addition, DK was able to get Rift and another kill, chunking down the mid lane plates as they took a very early 2k lead. INF made a huge play in the bot side, picking up two kills on the bottom lane tower as they picked up a tower to try and keep themselves in the game.

By the 22-minute mark, the kills were even at six to six, but DK found themselves 4k ahead with two drakes. From here, they looked to starve INF of resources across the map. INF picked up a massive Baron steal, and while they were unable to make too much of a dent in the DK economy, they did stop DK from taking advantage of it. DK remained in the lead, but signs of them slipping were starting to show and cracks started to appear. Sensing this, DK postured for the Baron and were able to pick it up, alongside three kills, losing just one in return. While INF looked like they’d clawed back into the match, DK clapped back as they looked to end.

DK took down the INF Inhibitors as they moved into the base to end it. The siege started poorly, but with DK turning around to re-position, INF got caught out and DK punished them. The win confirmed DK's place in the Knockout Stage as INF will unfortunately head home. 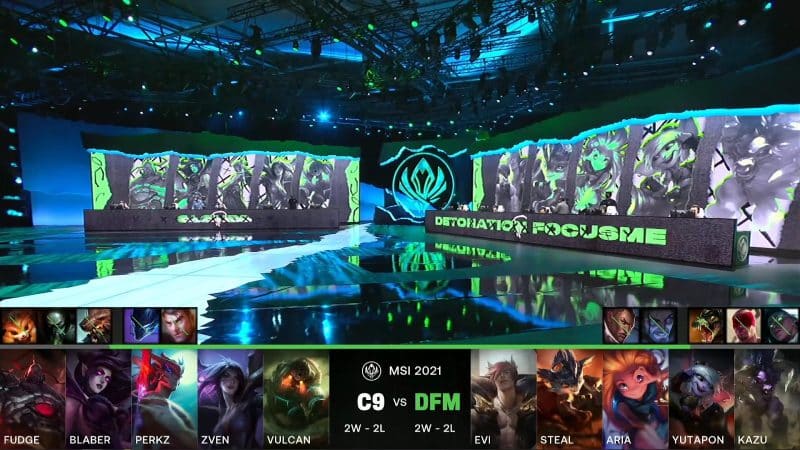 In a crucial match for C9, they dropped First Blood and gave themselves a mountain to climb early on. A botched gank in the top lane by DFM saw C9 pick up two huge kills, as they moved slightly ahead on the gold chart. It all went a little quiet up until the 15th minute when we finally got a one-for-one trade in the mid lane. C9 maintained a 1k lead, but the game was close.

However, it kept getting better for C9. After picking up a third drake, they chased down Evi in the bot side before a clean outplay by Perkz saw him take down a kill when he was 2v1 dove under his mid tier 1. C9 seemed to have found their footing, and despite some shaky moments in the game, C9 looked to be in control as their lead moved to 4k. At around this time, they also picked up a free Baron. To their credit, DFM did get a big kill top side as they defended their final outer tower. They started off strong but couldn't handle the C9 damage as they walk away ahead.

From here, C9 marched into the DFM base as they secured a victory, brining them to a 3-2 scoreline. This meant that DFM needed to beat DK in their next game to have a chance of advancing to the Rumble Stage. 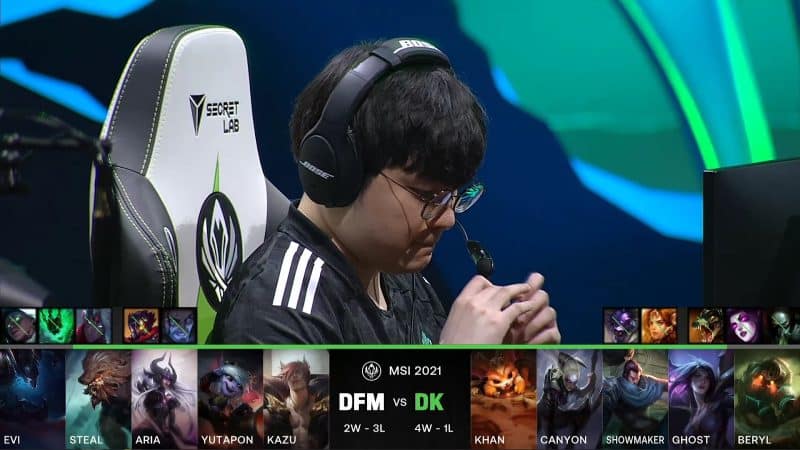 Even in such a difficult matchup, DFM got off to the perfect start, picking up a big kill in the 3v3 skirmish in the bot lane river, before chasing down Canyon to claim another kill. It’s still early doors, but DFM found themselves ahead in the early stages of the game. But DK found a way back in the bot lane 2v2, meaning they came out on top as the gold lead shrinks to just a few hundred gold.

DFM makes a few slips but still maintains dominance throughout the Rift. The gold is even but DFM is sticking to DK. DFM again found the fight and again came away just ahead. They found members of DK in the bottom river and it’s a massive win for DFM, who picked up four kills. But just like that, DFM threw it all away on the spawning of the Baron. They miscalculated the fight and got destroyed in the 5v5, losing four members. With this, the gold lead swung back to DK.

It happened again shortly after for DFM, unable to win in team fights they crumbled in the river as DK took down three members. Afterward, the once even gold lead balloons to 6k. DK used the momentum to swiftly push into the DFM base and take down the Nexus. Despite some good play in the early and mid-game, DFM was unable to make it count. 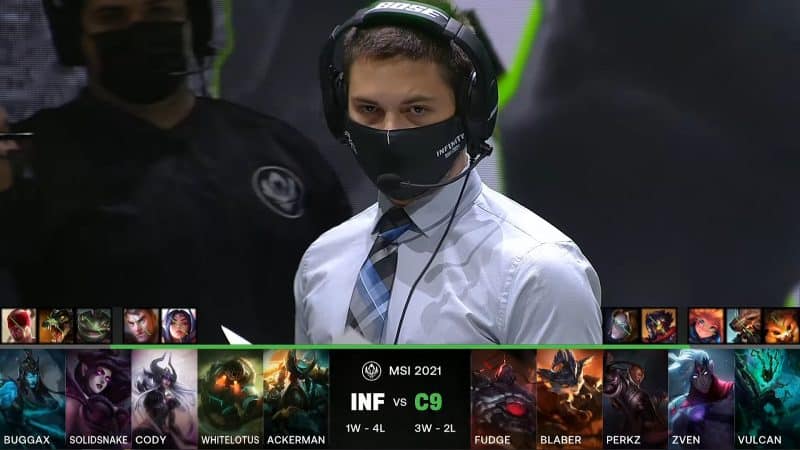 To wrap up the MSI 2021 Group Stage, it was the perfect start for C9. INF misplayed a 2v2 fight and Blaber was able to sneak up behind them and help C9 pick up two kills for one in return. It’s all go in this final game of the day, as INF picked up a two-for-one on the bottom side, meanwhile, Fudge wins a 1v1 on the top side. The back-and-forth continued and we weren’t even at the eight-minute mark. It’s almost like this game was meaningless.

While C9 is in the lead, INF kept picking up important kills across the map. C9’s lead drops to 2k as fights just continued to break out. The back-and-forth is endless, and despite the chaos, C9 remained ahead. Though, with how volatile the game state is, it’s hard to know who’s even ahead. Yet another fight, and this time it goes C9’s way. All five members survive while three members of INF drop. C9 took the opportunity to take the Baron as they looked to close out the match.