The final game of Round 2 took place on Sunday, with the winner moving on to face G2 Esports.

After knocking out Fnatic on Friday evening, Schalke 04 came into the series looking to knock out another huge organization. With their underdog mantle carrying them through the Playoffs thus far, Schalke 04 has looked like one of the strongest sides. On the other side of the Rift, we have Rogue. After losing to MAD Lions they fell into the Lower Bracket. While the favorites for the series, Rogue would have been worried facing off against a Schalke 04 squad looking in form. RGE got the start they needed to calm the nerves, as a 2v2 in the bot lane saw Hans Sama pick up First Blood. S04 did manage to get a kill back shortly after, however, RGE had pulled ahead to a 2k gold lead, even as S04 picked up yet another kill as the game approached the 15th-minute.

It took until the 20th-minute to get the first 5v5 of the game, but it ended with very little happening. Despite S04 trying to engage, they lacked the follow-up as RGE moved away to claim the drake. S04 tried to force a fight around the drake, which is where the game first finally saw a real fight, but despite S04 taking the drake, they lost the fight.

RGE took the opportunity to storm down towards the S04 base, and just like that, the game was over. Despite very little action in the game, RGE was able to cleanly sweep aside S04 in the first game of the series. 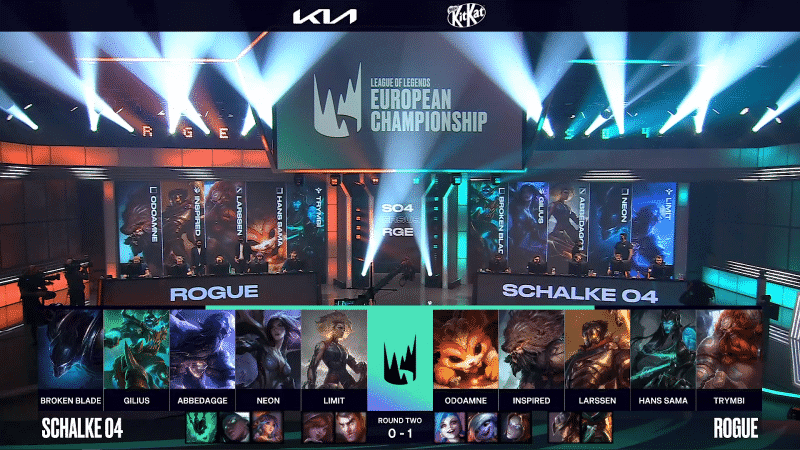 First Blood once again went over to RGE as they were able to pick up a bot lane kill. While it does fall to the support, the assist on the ADC and JGL helps to spread the gold. A later skirmish in the mid lane saw a one-for-one trade, though RGE had moved to 1k ahead. By the 15 minute mark, S04 had continued to make plays and got ahead, mostly at the cost of Larssen. Thankfully for RGE, they had enough pressure elsewhere on the map to keep up their slender 1k lead.

S04 managed to find the engagement they’d been looking for, though the overall fight maintained the RGE lead. With Baron on the map, the game pace accelerated. RGE picked up an early lead in the next fight, but it’s S04 that came out as winners as they cut down the RGE gold lead. S04 yet again pulled off a major fight around the drake, and while they get the three kills they waste a lot of time chasing down the remaining two members of RGE.

A swing in momentum

Looking to make this a series, S04 won yet another team fight, though fell short of taking the Baron buff. Finally, finding themselves in a 2k lead, S04 looked to close out the game. S04 got a pick before moving to Baron, and while RGE looked to steal it, S04 chased them away with a Teleport from behind. With that fight victory, S04 moved to 5k ahead as the RGE base loomed.

Shortly after, S04 baited RGE into the Baron bit and pulled the trigger. The extended fight ended up going two-for-two as RGE kept S04 off the Baron. Next, S04 postured for a fight in the mid lane while Neon solo’d the Elder. S04 chased RGE away, took the Baron, and sieged the RGE base. While RGE tried to defend, S04 was too strong and they pulled the series back to 1-1. 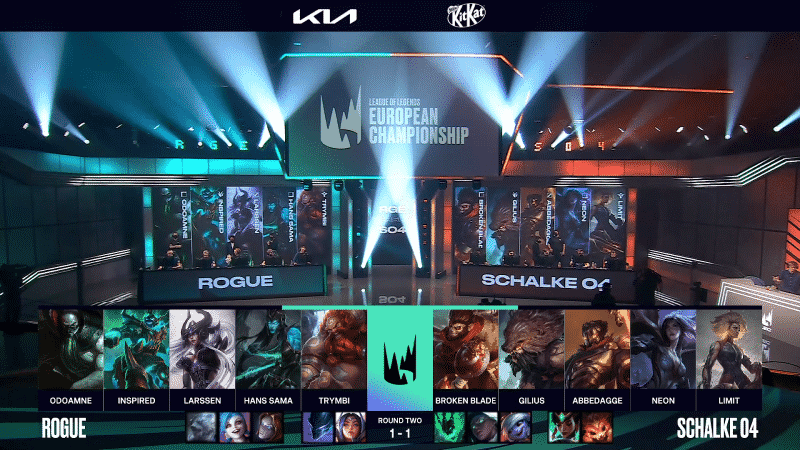 S04 looked to build off Game Two, quickly get a kill as they claimed the First Blood, and take an early lead. RGE had other ideas, however, as they quickly got two kills of their own and swung the lead back in their favor. Hans Sama got caught out in the top lane, and while S04 collapsed on him, his side Teleported in to save him. He ultimately died too fast and RGE lost another player as a result.

Shortly after though, RGE turned it back around in their favor again, as they picked up big fights across the map, moving back ahead with a 4k lead. With Inspired working on the drake, S04 was able to win a 4v5 team fight. They took down three members of RGE, though lost two in return. The series of plays saw RGE extend their lead to 5k. But not too long after, S04 managed to get a massive pick on Larssen after finding him alone. S04 used the time to take down the drake, however, Inspired clutched a steal, which moved RGE to Soul point. The play from RGE did cost them the remaining three members of the side, which allowed S04 to claw back to a near-even gold differential.

S04 got an early kill in the 5v5 fight around the Soul point drake. While S04 took the early lead, they lost vision of Larssen in the fight, and he was able to turn it all around. As a result, RGE took five kills and claimed the Baron. S04 tried to make a game-saving fight, but RGE was just too strong. RGE took the fight and took a Game Four win, as they moved to match point. To kick off Game Four, S04 yet again took First Blood. With their bot lane baiting in the RGE bot lane, Gilius turned up just in time to get S04 off to an early lead. S04 continued to keep their lead, though at the 15-minute mark it all went wrong. They overcommited for a kill onto Odoamne but GIlius was caught out under the tower. S04 tried to re-engage and lost yet another member. What was a slender lead quickly turned into a 3k deficit.

When the first big fight happened, RGE was more than ready for it. S04 fluff their engagement, causing them to lose three members as the Baron buff went over to their opponents. RGE moved to 6k ahead as they aimed to seal a match against G2 Esports next week. But S04 was not looking to go home just yet. They made a call to catch out Odoamne on the bot side, and while RGE tried to save him, all they accomplished was losing more members. S04 got away without anyone going down as they closed the gold lead with Dragon Soul spawning.

RGE and S04 postured for a fight over the Soul drake. Odoamne was able to flank, and his team engaged on the play, resulting in S04's demise. RGE left the drake and pushed down the S04 base and took the series victory. They’ll return next week to face off against G2 Esports for a spot in the Grand Final.