The final match of Round 1 of the LEC Spring Split got underway as Rogue and MAD Lions battled for a spot in the next round.

With Fnatic making it through to Round 2 of the lower bracket, and G2 Esports just making it through, Sunday’s series would give us a clearer view of LEC playoffs. While the winner of the series would move on to face G2 Esports, the loser wouldn’t be heading home. Thanks to seeding, the loser of the series is set to face off in the next round against the winner of the Fnatic v SK Gaming series.

The bot lane focus of this weekend's LEC continued in this series as, once again, it was a bot lane First Blood. This time it went to RGE, though MAD did manage to get a follow-up kill just after. Despite losing the First Blood and suffering a heavy 3k gold disadvantage by the 13-minute mark, MAD was able to claw their way back into the game with two more kills in the bot lane, as Carzzy on the Jinx moved onto the three kills.

Despite MAD looking to come back into the match, RGE found a huge fight around the drake river and walked away with four kills, with MAD picking up just two. The fight saw RGE move to 4k ahead. Though RGE held a 6k lead at 25 minutes, MAD continued to look for fights and pick-offs. While MAD was able to stay in the game, RGE looked to be dictating the pace of the game.

MAD tried to pull the trigger on a game-saving play, but RGE was more than equal to it as they turned it around and took down three members of MAD. They pushed through the base dropping the remaining two members of MAD before dropping the Nexus. A controlled victory from RGE, despite some brave fighting from MAD. 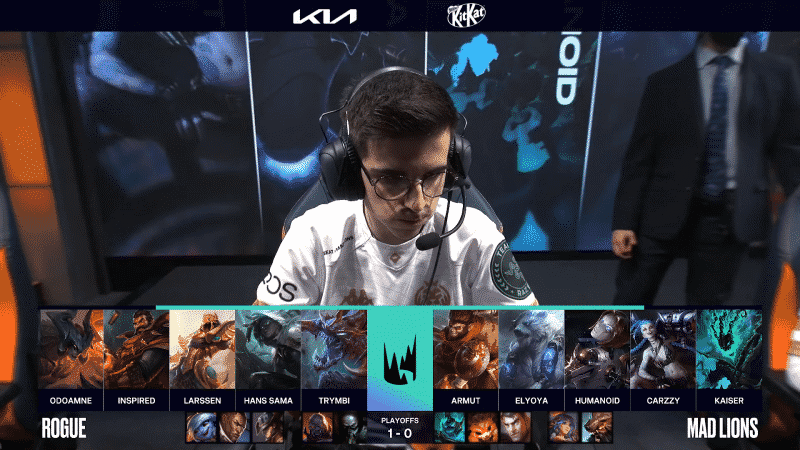 MAD made up for a poor showing in Game One as they get two kills in the bot lane, as a 3v3 goes exactly to plan for MAD. Moments later, MAD tried to pull off the same bot lane play again. This time, however, RGE were equal to it as they collapsed on the bot side of the map and picked up two kills. During the tail end though, Carzzy was able to get a solo kill onto Hans Sama, while Armut Teleported down to pick up another kill. At the 6:30 point, MAD had claimed a small gold lead. Not to be outdone, MAD replied by picking up three more kills top side as they moved 2k ahead before the 10-minute mark as they fully showed up in Game Two.

By the 15-minute mark, the gold lead was down to just 1k on the side of RGE. But MAD continued to make plays across the map as they looked to bounce back. With the BAron fight started, RGE tried to take it but it’s MAD who claimed the buff and wiped out all five members of RGE. With that play, MAD moved to 4k ahead. MAD applied pressure to RGE with the Baron buff, taking down both the mid and bot lane Inhibitors as they looked to encircle RGE and close out the game.

As they pushed to claim the top tower, MAD pulled the trigger and took down RGE to claim the Game Two victory and give us a series. 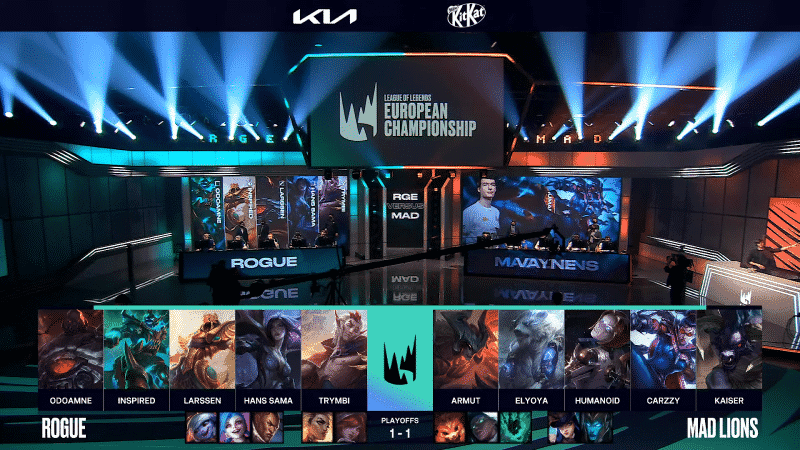 RGE, looking to bounce back after Game Two gets the early First Blood. In typical fashion for this weekend, it once again comes in a bot lane 2v2. A much closer Game Three saw the sides separated by just 800g in favor of MAD by the 15-minute mark. Though, with MAD a tower ahead, RGE still had the means to close the gap to zero.

Within three minutes, however, MAD has taken back control of the game as they took a 3k lead. MAD pulled the trigger on a Baron fight, taking it and taking down four members of RGE in the initial fight, with a fifth coming as RGE looked to steal. With a 7k lead at the 23-minute mark, MAD looked to close out the game and move into match-point.

With a 1k lead, RGE just couldn’t stop MAD as they marched down the top lane and took the series to 1-2. 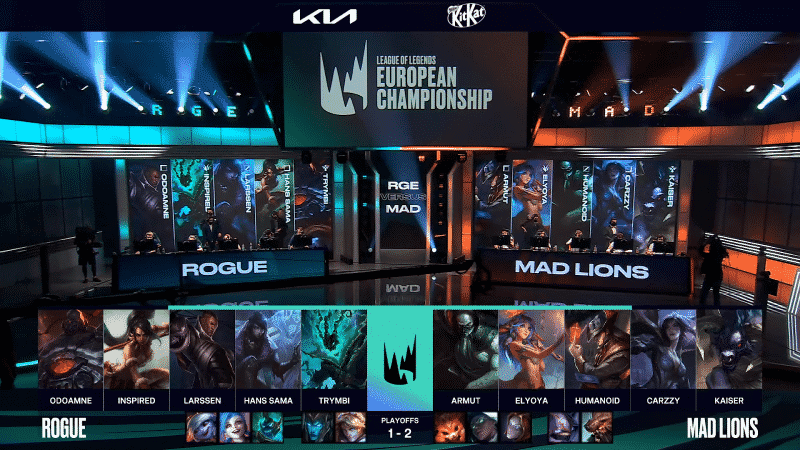 MAD looked to get the series over swiftly as they picked up yet another First Blood. This time it came in the top lane, as Armut picked it up on the Urgot, which was a worrying sign for RGE. RGE, not looking to get 3-1’d in the series, moved to the top lane as Hans Sama picked up three kills for one in return as RGE came online.

With the game calming down by the 20-minute mark, RGE looked to capitalize on the gains they’d found. MAD continued to look for plays, but RGE kept their distance as they tried to take the game to 2-2. With the drake on the map, RGE was able to claim the Soul point. The ensuing fight went RGE’s way, but MAD made a statement that they won’t go down easily in 5v5 fights.

Almost like RGE failed to learn, MAD started a 5v5 fight which saw MAD take down all five members of RGE, losing just one in return. MAD continued to cause chaotic moments and RGE just didn’t have the answer. WIth Elder drake picked up, MAD made a push in the top lane to pick off members of RGE. While it was a rough start for both, MAD once again managed to take the win in the fight as they went four-for-two and looked towards the Baron.

The Baron was then picked up, which allowed them to devastate RGE in the mid lane. From here, they pushed the base to take the win and cause a major upset in the LEC.