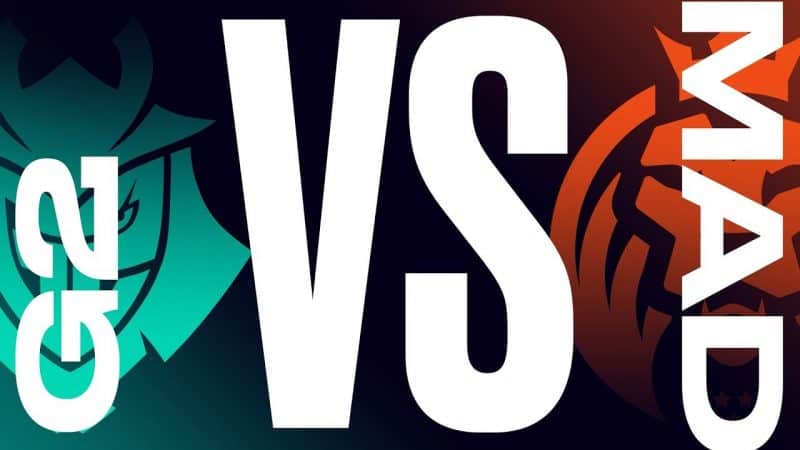 G2 Esports looked to clear their way towards the LEC Spring Split 2021 Finals by facing the in-form MAD Lions.

G2 Esports was very shaky in their Round One match against Schalke 04 and they were punished heavily, resulting in a tense five-game series with them. Even though they managed to bring back the last game when it mattered the most, it was very interesting to see them match against the in-form MAD Lions. The MAD Lions, after defeating Rogue in the last round, were very confident in upsetting their opponents and securing a spot for themselves in LEC 2021 Spring Split Finals.

With Fnatic going down in a shocking 3-0 sweep by Schalke 04, all eyes would be on G2 Esports to move forward the legacy of European superteams. 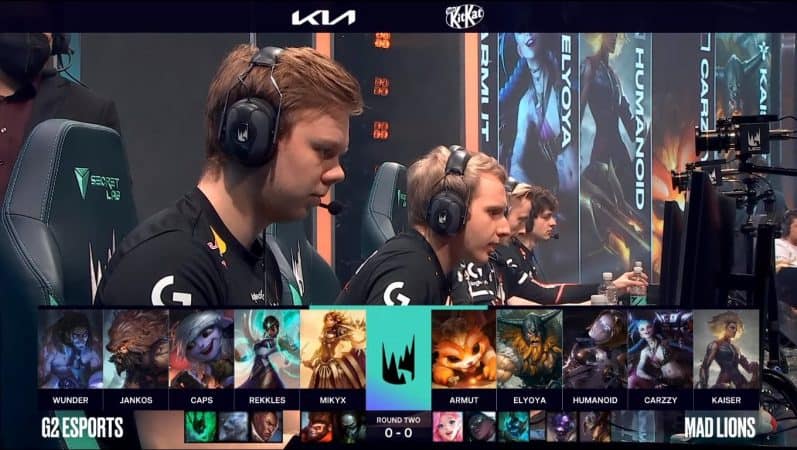 After a very interesting drafting phrase for G2 Esports, both the teams looked very strong going into the first game. MAD Lions lost Elyoya at a very early stage as Caps got the First Blood of the match on him. Even after an early game deficit, MAD Lions looked for proactive kills and secured some kills in the top lane. Caps dominated the mid lane against the enemy Orianna and he gained a ton of turret gold in the top and mid lanes before moving into the mid-game. While a Teleport play by MAD Lions got him killed in the bottom lane, G2 Esports looked to find more kills for Caps to make him a carry hyper carry on the Tristana. However, G2 Mikyx, who got caught on multiple occasions, constantly supplied MAD with kills and made them relevant in the match.

While all three Barons were secured by MAD, both of the teams had three dragons in their arsenal. Eventually, MAD Lions secured the Cloud Soul to push their lead into the match further. G2 Esports desperately tried to come back into the match, but the late game damage from Jinx was too much to deal with. After a great team fight in the mid lane, MAD Lions secured the first match of the series. 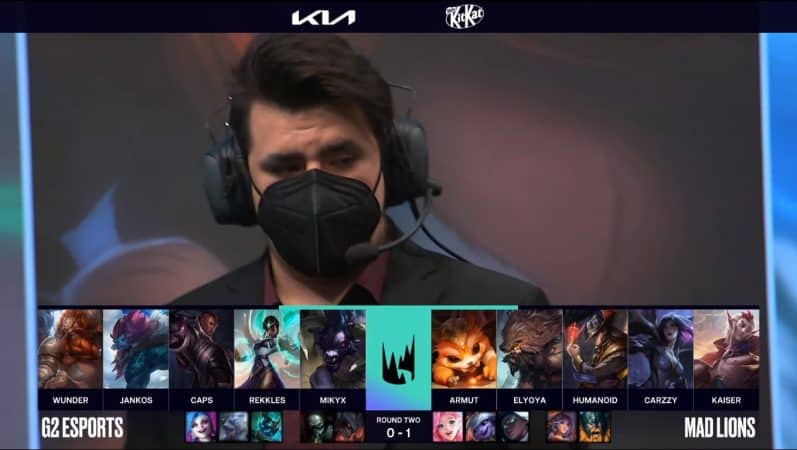 The drafting phrase continued to be surprising for Game Two. The ban phrase saw many critical bans, which forced Jankos to an extremely off-meta pick, Trundle, who isn’t the best at clearing the jungle quickly. As a result, MAD Eloyoya gained uncontested control of the jungle. First Blood came through when MAD Lions made a coordinated play on Caps as he walked back to the mid lane. Neutralizing G2's carry at this early stage allowed Humanoid to roam whenever he wanted and facilitate plays all over the map. Meanwhile, the Udyr pick helped the rookie jungler to deny camps from Jankos and secure a sizable lead for himself and his team.

At the 14 minute mark, MAD had a 5k gold lead over G2 Esports, which gradually increased over time. MAD Lions took strategic team fights and won them every time. G2 Esports tried to replicate the Game One strategy by feeding Caps. But the enemy Udyr and Rakan made it impossible for him to deal damage in the team fights. While G2 Esports tried their best to get fair fights, MAD always grouped around objectives and forced their opponents to take bad fights into them.

MAD Carzzy slowly scaled into the late-game with his Kai’Sa pick, where he dominated team fights with his high kill threat. Moreover, at this point, G2 Esports was losing fights as they were very behind in gold. They could barely dent the MAD Lions composition. The last team fight near the top lane was a desperate attempt to come back into the game by G2. But it was nullified completely by MAD Lions, which allowed them to take the Nexus and bring the series to a match point. 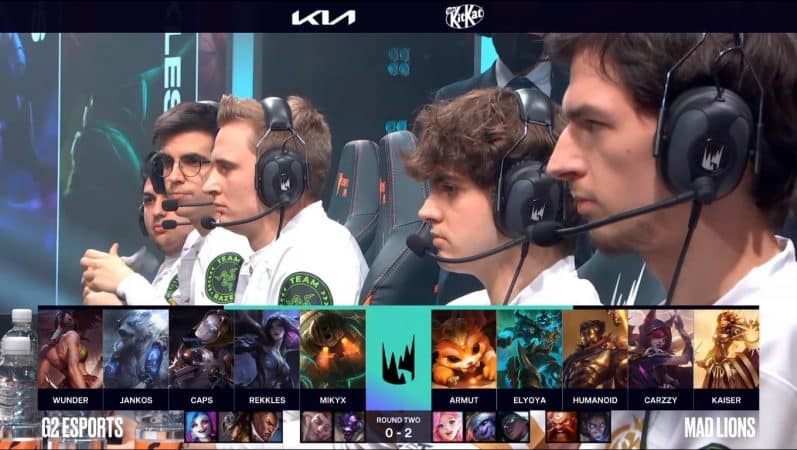 With G2 Esports on the verge of getting clean-swept by MAD Lions, they returned to traditional meta picks during the drafting phase. But MAD also formed decent counters to the G2 composition. Therefore, the match was expected to be very fierce and bloody.

Elyoya secured First Blood when Wunder overextended in the top lane. G2 responded by picking up some great kills in the bot lane, with Jankos on his Volibear constantly making visits to the lane to further push the enemy bot lane out of the match. The early game aggression from G2 Esports helped Jankos get the two dragons and secure map control for the team.

While MAD Lions dove Wunder in the top lane, G2 Esports, with their great macro, caught Elyoya in the mid lane and got a shut down on him to exchange one-for-one in kills. The mid game was surprisingly calm as both teams farmed to their reach their power spikes. G2 Esports accumulated three dragons and a very good gold lead on MAD Lions. Then, they secured the Cloud Soul for themselves. After a fantastic team fight near the Baron, G2 Esports blew open the game and gained a significant lead.

Losing control on the match, MAD Lions had to start the Elder Dragon to stay relevant in the game. However, G2 Esports waited patiently and executed a fabulous team fight in the river to eliminate the remaining MAD players and secure the dragon for themselves. Meanwhile, Caps was already in the enemy base pushing furiously with the minion wave to crack open the Nexus. With a Game Three win, G2 kept their hopes of a reverse sweep alive in this tense series. 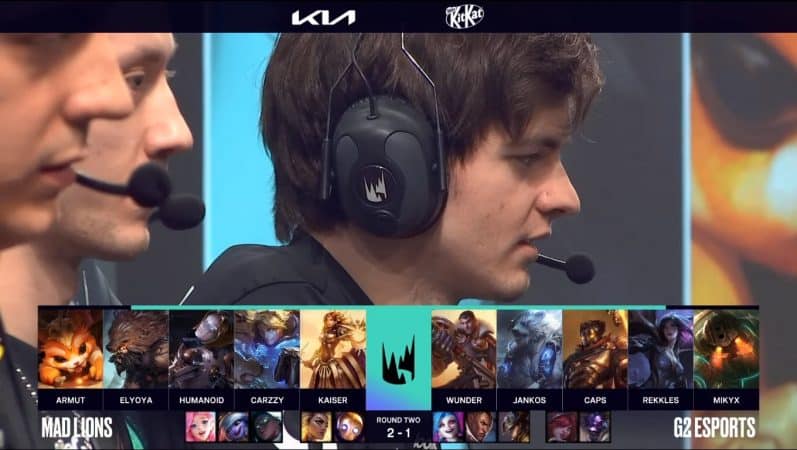 G2 Esports, slowly gaining momentum from the last match, went into the match with good composure. Both teams had excellent late-game champions, so the early game was fairly calm. However, the first team fight occurred in the river, where G2 Esports fell victim to MAD Lions' great rotations. This gave away two early kills to their opponents. While G2 Esports also set up dives to get back into the game, MAD Elyoya traded other objectives like dragons and turrets on the other side of the map.

The mid game saw many skirmishes from both of the teams, with both of them trading kills and objectives. At the 25th minute, a team fight near the Baron Nashor saw Rekkles getting one-shot by Carzzy. However, G2 Caps and Wunder turned around the team fight by dealing enormous damage to the MAD champions. That team fight gave G2 Esports a chance to come back into the match. But, being overconfident, G2 Esports took another fight into MAD Lions into the mid-lane, which didn't go as planned. Carzzy single-handedly dealt 90% of the damage in that team fight and MAD dominated. Afterward, they secured the Infernal Soul for the team, and every team fight from that point was impossible for G2 Esports, as they desperately tried to hold onto the match.

The last team fight also saw the fall of Rekkles in the mid lane, which translated to MAD Lions pushing vigorously into the enemy base and pulling off the shocking victory over G2 Esports. MAD Lions secured their spot in the Finals for the very first time, while G2 Esports will move onto the Lower Bracket Semi-finals. 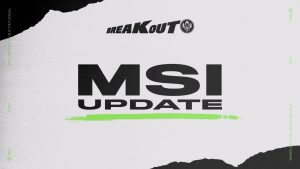 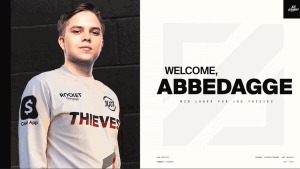 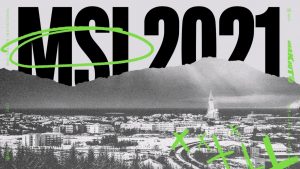