FlyQuest and Team Liquid battled for a straight shot to Finals tonight.

After three weeks of intense competition, the LCS is nearing its end. Last night, TSM knocked Cloud9 out of the Lower Bracket and out of Worlds contention too. Today, Team Liquid ("TL") and FlyQuest ("FLY") took to Summoner's Rift to see who the top dog is. The winner of this match got a ticket straight to the LCS Finals, while the loser is knocked down and has to play against TSM next week to get to Finals. Here's how it all went down! 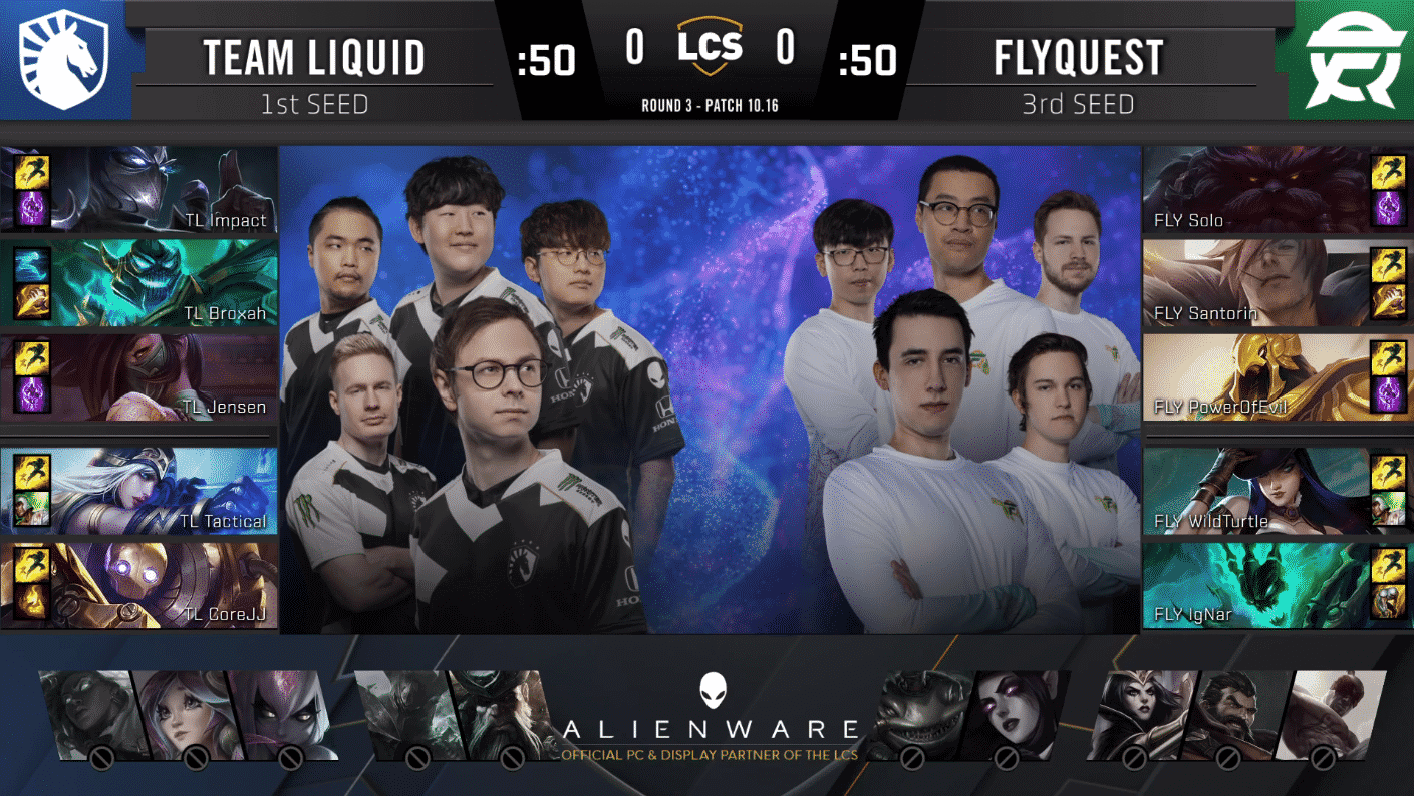 The opening game of the series certainly set a good tone for the rest of it. It was a back and forth brawl, with both teams looking on form. The early game was controlled mostly by TL, who won the first team fight two-for-one, took the Rift Herald, multiple towers and another pick onto IgNar. However, FLY didn't sit still, as they secured two dragons. But TL undoubtedly had the lead in the mid game and grew it in small increments with kills and dragons for themselves.

Despite this, the game flipped on its head at 30 minutes. At this point, a team fight broke out at the dragon pit, which FLY won one-for-zero at first. But they didn't stop there, as FLY chased the fleeing TL champions and cut down three more. This allowed them to get the first Baron buff too. With it, FLY won another fight in TL's jungle, then busted down the bottom Inhibitor. Shortly after, another dragon fight occurred, where FLY traded three of their lives for the powerful Infernal Soul.

At 37 minutes, a one-for-one trade left FLY in a winning position and gave them the inside track to another Baron. The next few minutes saw FLY dismantle TL's base and all three Inhibitors. Crucially though, TL managed to repel them and buy some time. Finally, at 45 minutes, FLY pulled the trigger in TL's base. A very even team fight ensued, where TL fought for their lives. In fact, TL managed to Ace FLY, but it wasn't in time. The army of minions already was on TL's Nexus and finished the game for FLY. 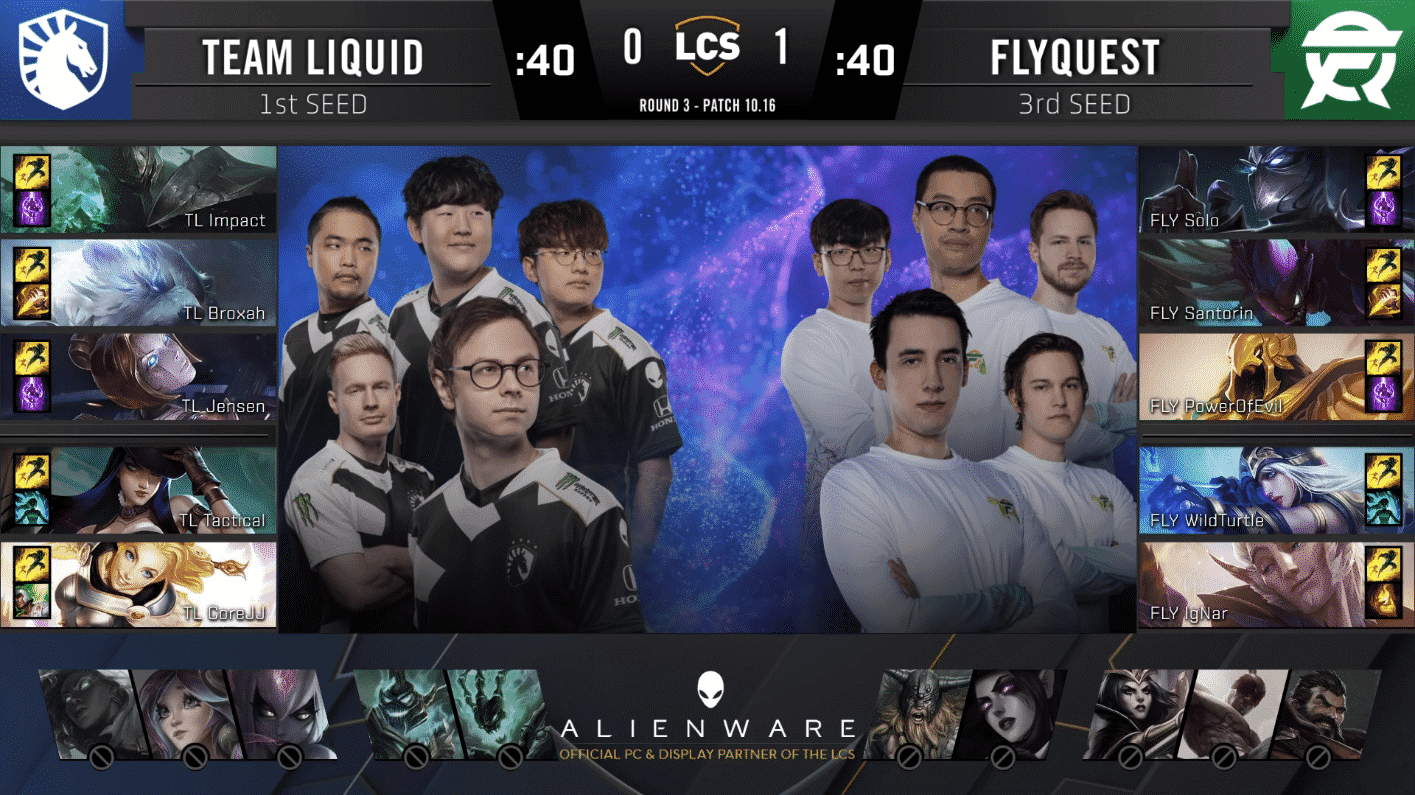 The second game of the series was strikingly different from the first. That's because TL put on an absolute clinic in it. Besides Santorin ganking Impact for First Blood, pretty much everything went TL's way this game. They got the first dragon at nine minutes, then proceeded to win the first team fight at 12 minutes. TL also capitalized on FLY overaggression in the mid lane. Here, FLY tried to dive Jensen twice, but both times TL went up in kills, with five kills in total.

In addition, TL dominated a Rift Herald fight, where the squad went four-for-two in kills and secured the objective. At this point, the TL snowball was moving at great pace. Thye kept moving around the map, cleaning up kills and smashing down towers. Throughout this time, they accumulated three dragons and put themselves on Soul point too.

At 27 minutes, another fight erupted, this time in FLY's red side jungle. Once again, TL won and got three kills while only losing one. This led to an easy Baron. Equipped with the buff, TL made quick work of FLY's outer towers and soon pushed down the top and middle Inhibitors. However, FLY held on to meet TL at the final dragon fight. Unsurprisingly, TL took the fight and found another victory, killing four from FLY before seeing their opportunity. They immediately rushed FLY's base and destroyed their own first Nexus of the series. 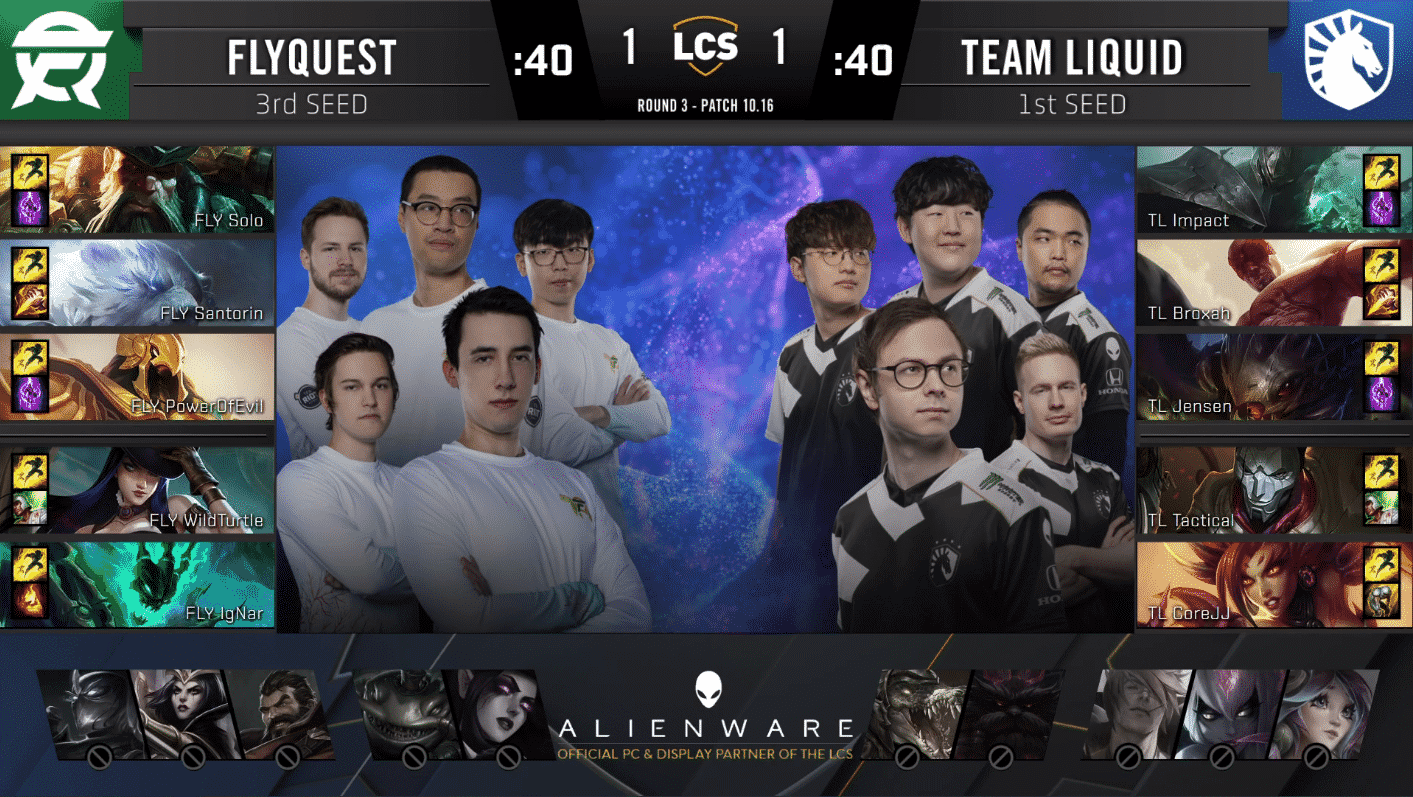 The pendulum swung back to FLY's favor, as they won game three. It's important to note, however, that TL had a decent lead up until the mid game. At five minutes, a 2v2 between top laners and junglers happened, where TL went up two-for-one in kills. FLY took the first dragon, but TL struck back with a kill and a Rift Herald at nine minutes. TL then won a team fight bottom, but FLY won one a minute later and grabbed a dragon too. It was close, but with things like tower plating, TL had a respectable lead.

But then team fights started constantly and FLY pulled ahead. The second Herald spawned, so the teams met up again. This time FLY emerged victorious with two-for-zero in kills and the objective. TL did manage to win a fight near the dragon and took a Mountain for themselves, but FLY seemed to have the momentum. They won a fight at 20 minutes, then set up for another dragon fight. Here, FLY engaged on TL, killing two members quickly. The squad chased down TL and got two more kills, which allowed them to get the third dragon.

Disaster struck right after that for TL. FLY feigned starting Baron, which prompted Impact to Teleport in near the pit. FLY was ready though, so they instantly killed him as soon as he landed. Down a member, TL had to forfeit the Baron to FLY. With it, FLY pushed mid and top and easily destroyed the Inhibitors in those lanes. Then, a fight erupted in the TL jungle, resulting in two more kills over to FLY. From here, it was simple for FLY to push forward and demolish TL's second Nexus. 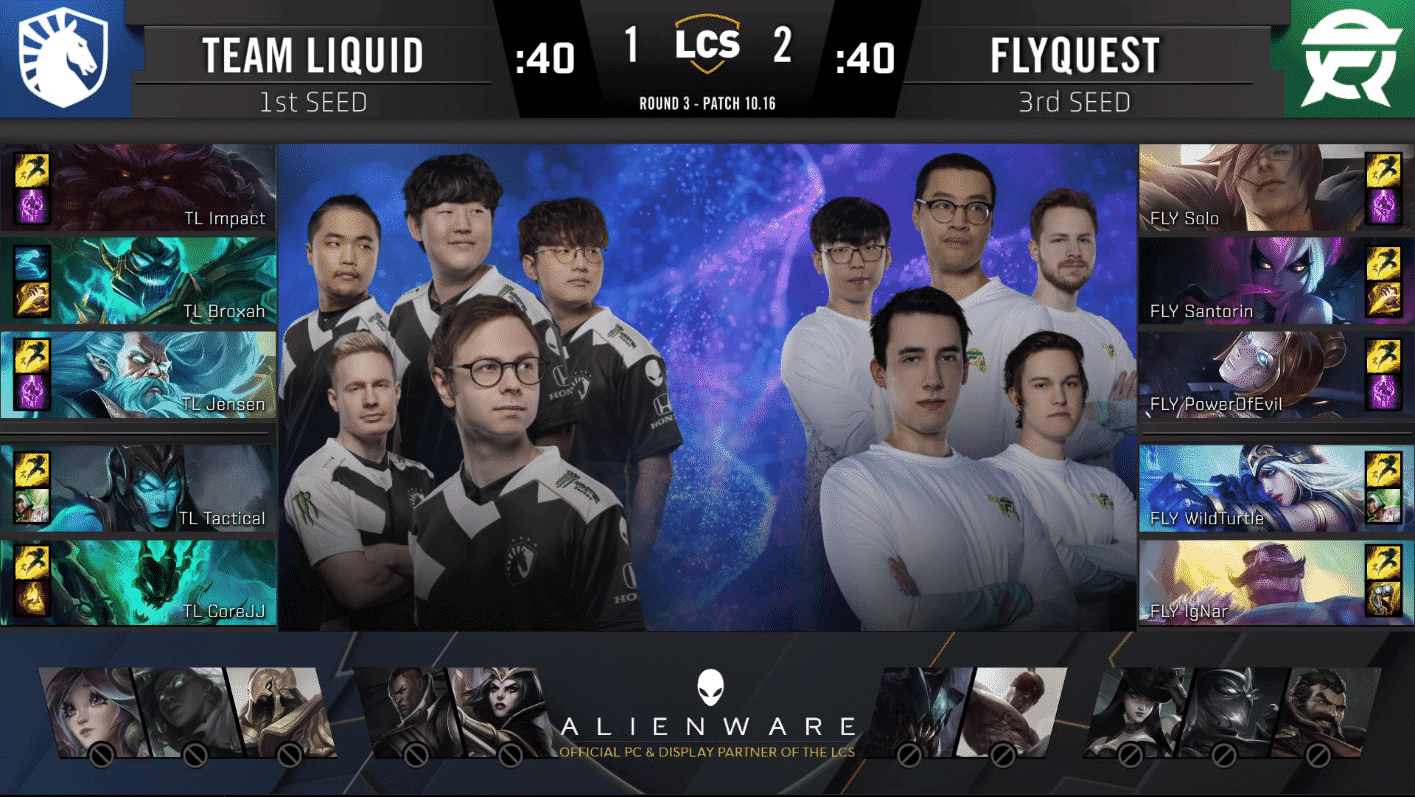 Game Four was a totally normal game until the end. Then it became an edge-of-your-seat bloodbath. The game started off great for TL, as Impact outplayed a 1v2 under his tower to get First Blood. Next, Broxah ganked and killed Solo before moving bot to take an Infernal Dragon. TL also got Herald, which they used to get the First Tower bonus bot after diving and killing WildTurtle.

But FLY soon put the foot on the pedal. They began their rise with a five-for-two team fight win around the dragon. Three minutes later, FLY found another good team fight, getting two kills and a Baron to boot. This first one didn't accomplish much, so FLY had to get a second one at 30 minutes after finding a pick. This one was more devastating, as FLY knocked down two Inhibitors with it. It looked doomed for TL as FLY killed two of their members and pushed on the Nexus Towers. But Tactical, the Rookie of the Split, absolutely popped off and carried a 3v5 team fight. The result of this was an Ace for TL from the brink of death.

This is when it got crazy. TL, after barely surviving the base push, got caught up in another team fight in the jungle. Once again, Tactical was clutch and helped his team win it. Then, at 37 minutes, TL started the Baron, which prompted another team fight. It was a nail biter, where four from both teams fell dead. FLY's Solo did retake the middle Inhibitor though.

There was still action to be had though. TL picked off Santorin, and with the long death timer, FLY had to forfeit Ocean Soul. The stage was set for one final fight in the mid lane. It was close, so close, but Tactical stood tall again. TL killed two, then pushed forward and conquered FLY's Nexus, tying up the series 2-2. 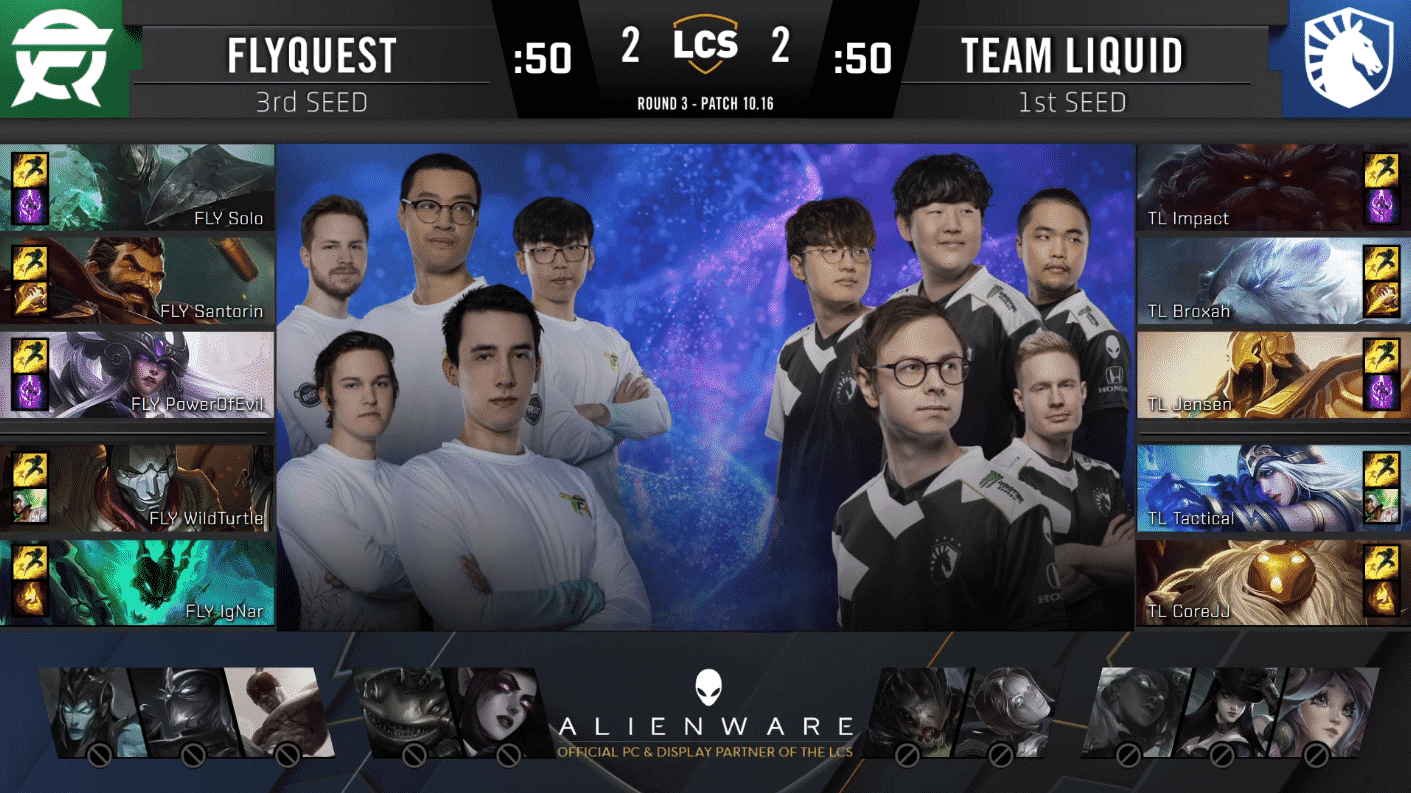 An anticipated Game Five followed a necessary play of Silver Scrapes. Unfortunately, it wasn't anywhere near as exciting as the previous game. It began with TL taking two dragons by 11 minutes, but between those two FLY found a winning fight at the Rift Herald to get First Blood for WildTurtle. After that single kill, FLY was in the driver's seat, controlling the pace of the game. At 16 minutes, they got a kill and an Infernal Dragon, then took a second Herald at 17. In addition, FLY demolished bot the mid and bottom towers.

From here, FLY had full control. At 22 minutes, a long fight drew out near the dragon pit. First, FLY secured the Infernal, then moved for a team fight. Four from TL fell on death timer and FLY took a bottom lane tower too. The squad held control of the map for a few more minutes, until 31 minutes, when they claimed a free Baron.

A minute later FLY was marching down lanes and, after killing two, blasted two Inhibitors. Right after that, FLY turned and claimed the Infernal Soul that they had worked for for a while. At this point, TL was helpless against FLY's onslaught. That said, all FLY needed was one last scuffle in the base to kill four from TL, finish off the third Nexus and punch their ticket straight to the LCS Finals.