Two of NA's most iconic teams fought for their Worlds hopes tonight.

The LCS playoffs are well underway now. After two weeks of competition, only four teams stand strong now. FlyQuest and Team Liquid have already secured their spots at Worlds and only one spot remains. Two of the biggest organizations in North American League of Legends, Cloud9 (“C9”) and Team SoloMid (“TSM”), fought for this final spot tonight.

C9 had an incredible Spring Split, and thought they faltered in Summer, they still want to test their mettle against the other best teams in the world. On the other hand, TSM wants the chance to find domestic success they haven't found in two years and make their way to the Worlds' stage after a long drought. This single best of five series meant everything for the teams. Here's how it all went down. 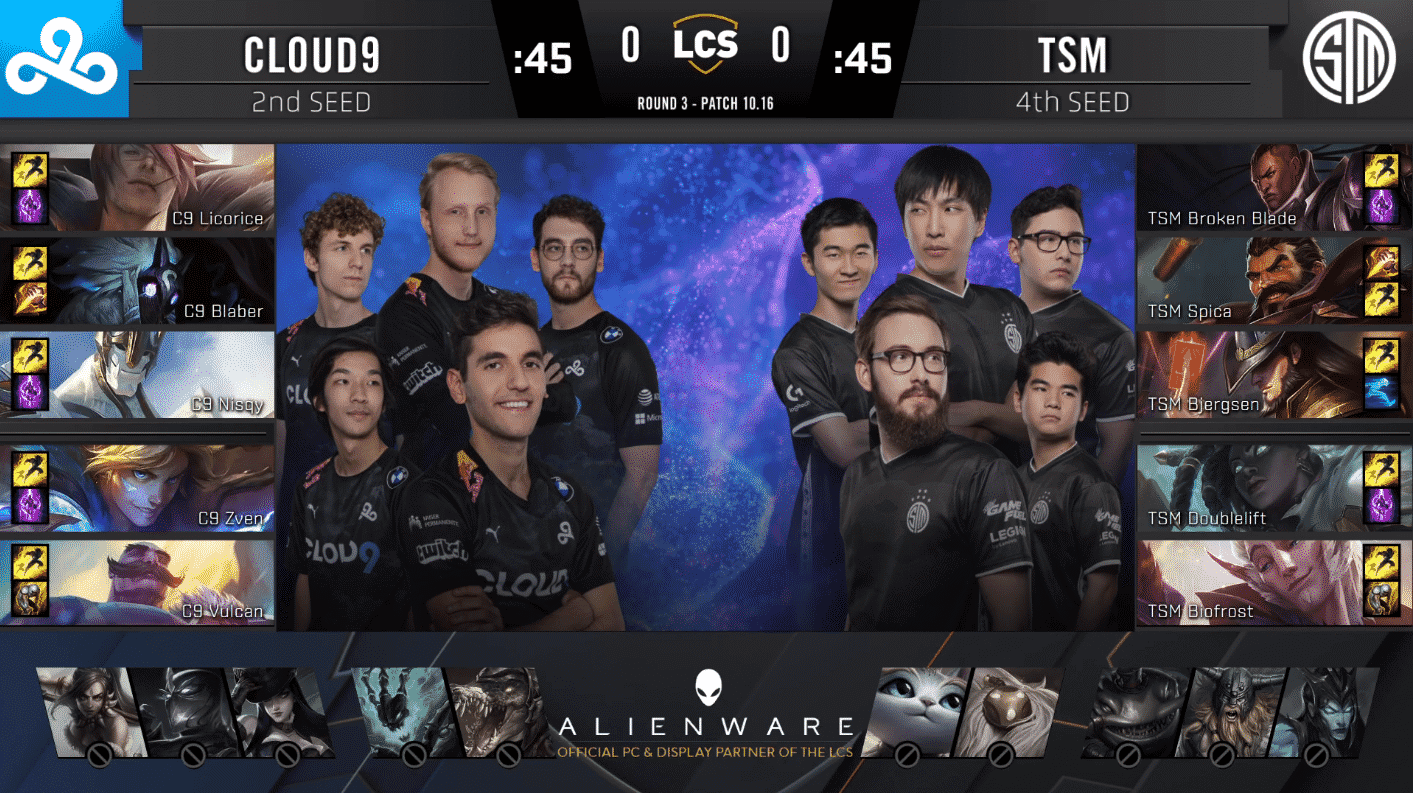 The series kicked off with a fairly decisive win for TSM. It started in bizarre fashion too, as the teams met near the mid lane at level one to duke it out 5v5, and though it was close, TSM's Broken Blade walked away with First Blood. C9 was active early, as Blaber took the first dragon and then he ganked top with Nisqy to get a kill onto Broken Blade. But TSM soon turned it on. A back and forth Rift Herald fight resulted in two kills and the objective for TSM. After that, they used it mid to take plates and another kill onto Nisqy.

Shortly after, TSM collapsed back on mid to take the First Tower bonus. C9 won a fight in the bot river, so they tried to fight again at Herald. But like before, TSM came out on top with a kill and Shelly. TSM continued to grow their lead by taking towers across the map, but to their credit, C9 did find some picks and towers of their own. As a result, C9 still had a foothold into the game.

But it quickly fell away from them. At 26 minutes, TSM started up Baron and forced C9 to come to them. Here, they engaged and quickly killed three from C9, easily securing the Baron afterward. With this, they demolished multiple towers and two Inhibitors, while also exposing the third one. C9 did repel them with a two-for-zero team fight win in their base, but TSM ended up trading C9 the Mountain Soul for the final Inhibitor. Locked in their base, C9 couldn't contest TSM's second Baron. Equipped with the Baron buff again, TSM pushed mid and C9 tried to engage a fight. It went disastrously for them though, so TSM wiped the floor with their rivals then pushed their army of empowered minions into the base and claimed the first Nexus of the series. 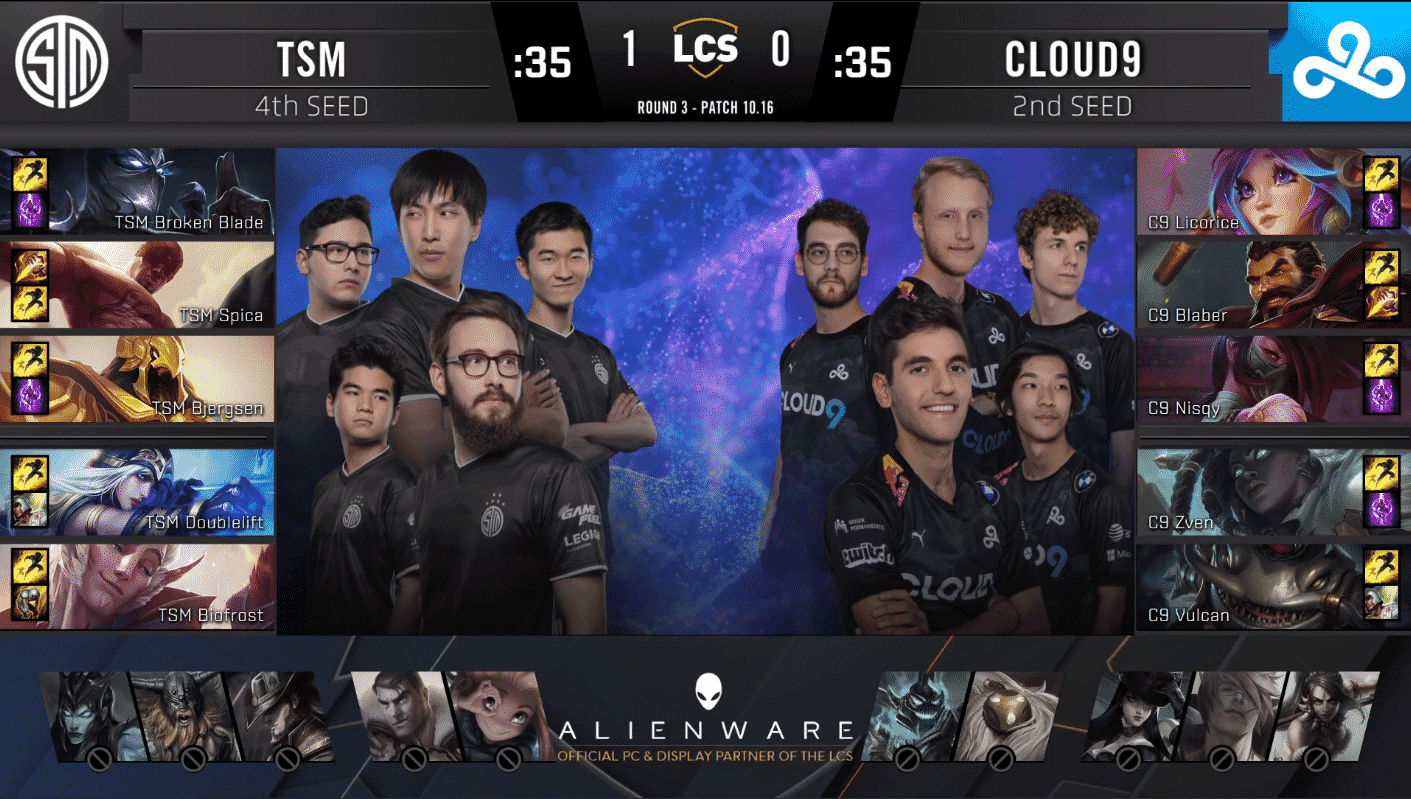 TSM had a good game one, but C9 had a great game two for themselves. The game began with Spica ganking top to get First Blood onto Licorice, but C9 was bothered by it. In fact, in the following minutes, C9 took a Cloud Dragon, the first Rift Herald and set up for the second dragon at 11 minutes. This was massive for them, as they took the team fight and absolutely crushed it. They went up five-to-one in kills and an Ocean to boot.

TSM dove and killed Licorice under his bot lane tower a minute later, but again, C9 was resilient and claimed the First Tower bonus top in response. At 17 minutes, the teams met face to face once again for the third dragon. Spica got a great Smite steal on it, but C9 turned the fight in their favor with two free kills. The next few minutes were rather quiet until the action exploded again at 22 minutes, where C9 found three swift kills and immediately secured the Baron.

While teams usually push with Baron, C9 chose to take a couple of fights. They won them overall but consumed a lot of time, meaning they couldn't do significant damage to TSM's base. But that didn't matter much at all. That's because at 29 minutes, another team fight erupted at the dragon pit. Despite Doublelift stealing the dragon this time, C9 was happy enough to take the 5v5. It was a slaughter. C9 massacred all five TSM champions, which allowed them to simply push mid and end, tying up the series 1-1. 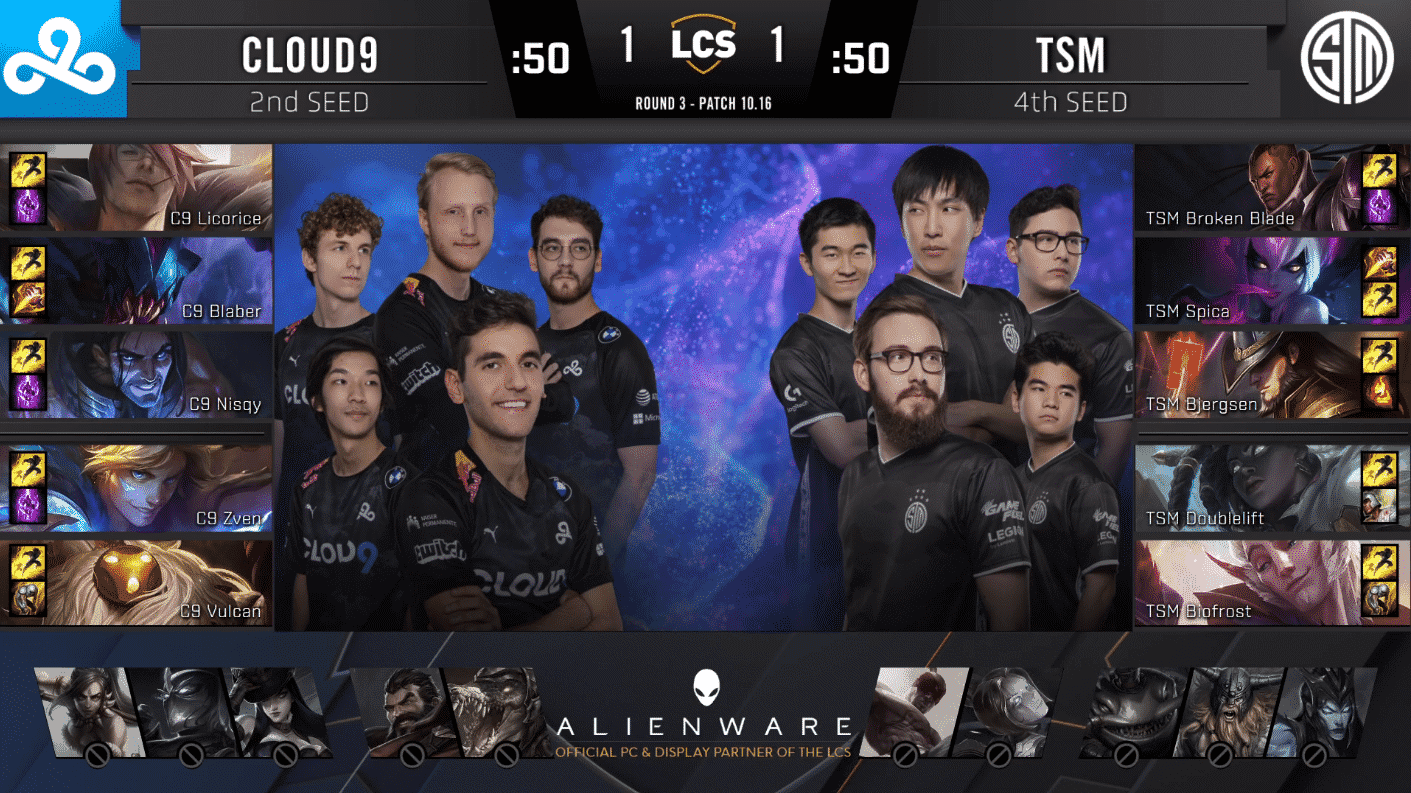 Game Three brought the series to match point for TSM. It was rather even early on, as both teams made plays in the early game. Blaber made the first move on top lane, where he killed Broken Blade for First Blood. Following that, a big skirmish erupted in the C9 jungle, where TSM mopped up three kills while only losing one. But just after that Blaber returned top to kill Broken Blade once more. To even things up, TSM three-man dove and killed Licorice under his top lane tower.

All in all, it was a scrap. Both teams traded objectives and were always looking for the next play. C9 got the Herald and a two-for-one fight, but TSM got a second dragon. TSM dove and killed Licorice again, but C9 claimed the First Tower bonus. The important moment was at 22 minutes, when C9 sent Herald mid and forced a fight. Here, C9 emerged victoriously with three kills, which translated to a Baron.

This Baron allowed C9 to take the middle Inhibitor and a couple of towers bot. Things didn't stay in their favor for long though, as TSM engaged on a bot lane fight. It went three-for-one in their favor and gave them the opportunity to secure Ocean Soul. Despite just losing Soul, C9 respawned and instantly rushed the Baron. They secured the buff, but did lose three members for it. With this man advantage, TSM ran down mid and easily took the Inhibitor. The squad decided to push further, and after nabbing two more kills, TSM smashed C9's second Nexus. 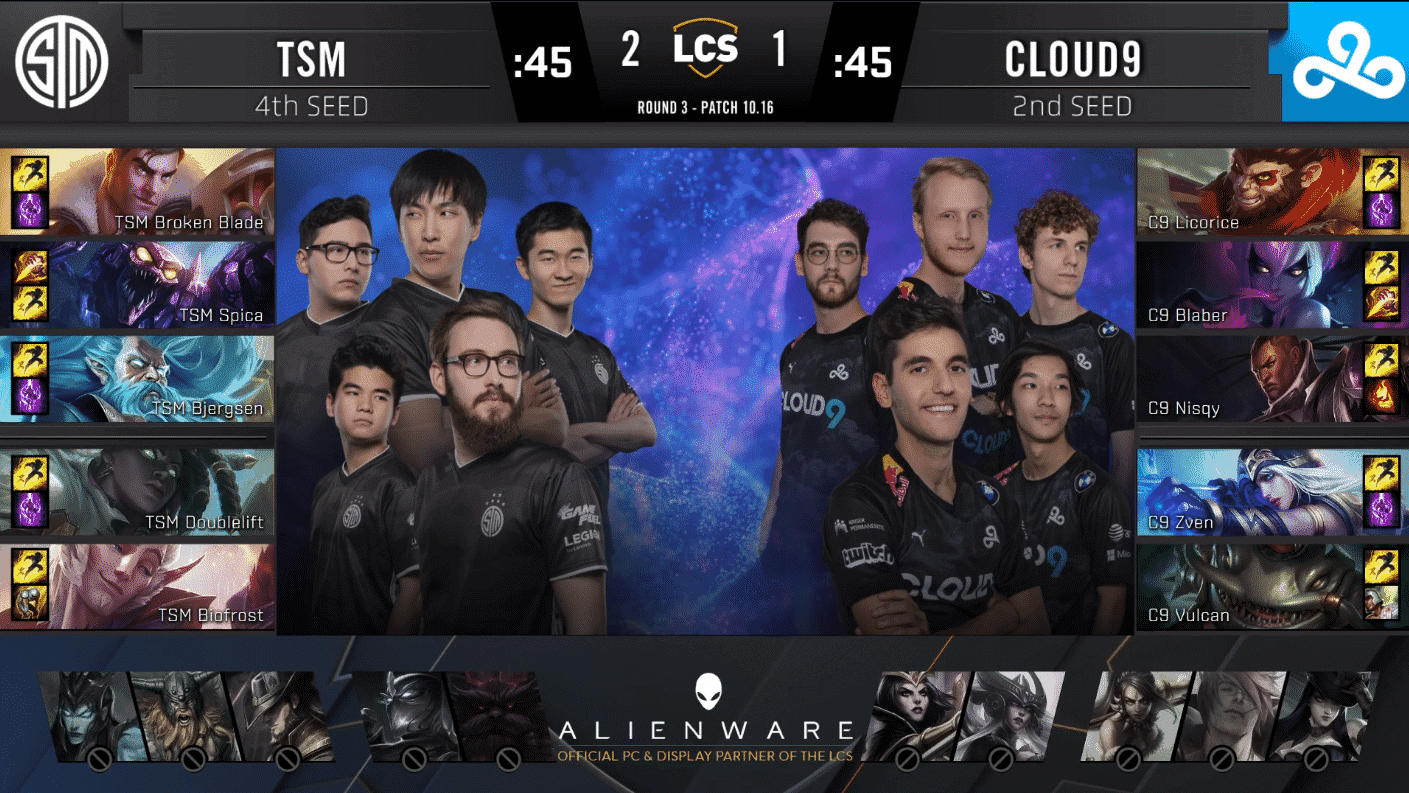 Game Four was another fairly dominant one, but both sides showcased glimpses of brilliance. The game started off with Broken Blade solo killing Licorice at minute three. This one death was detrimental to C9, as Spica brutally camped top and got Broken Blade two more kills onto Licorice within the next six minutes. To make matter worse, TSM captured the Rift Herald and used that top to get the First Tower bonus. Eventually, Blaber did gank and kill Broken Blade, but the top gap was too wide by then.

The TSM lead grew bigger in the mid game. The first team fight of the game occurred at 13 minutes, where TSM won two-for-zero. The second fight was three minutes later. Here, TSM knocked down three from C9 for only one of their own, adding a Mountain Dragon on top of the kills. That wasn't all though, as TSM kept pushing it further with things like towers, skirmishes and picks.

The deciding moment of the match came at 22 minutes. Here, TSM willingly gave over the Mountain Dragon and instead chased down and killed Blaber. With the enemy jungler dead, TSM went to Baron and claimed that objective instead. Now equipped with the Baron buff, TSM laid siege to C9's base. The middle Inhibitor fell first, then the bottom one followed. TSM had no fear as they pushed forward towards C9's Nexus towers, forcing C9 to fight. As they a sizable gold lead, TSM rolled over the desperate C9. All five members of C9 dropped and TSM destroyed their Nexus.

Finally, after two years of not making it, TSM had secured a spot in Worlds.