It all came down to this, one final best-of-five to determine who is the best in the world!

After weeks of competition, the 2021 World Championship has reached its climax. Twenty-two teams stepped on stage, now only two remain; the LPL's Edward Gaming ("EDG") and the LCK's DAMWON KIA ("DK"). The reigning World Champions DK have looked near unstoppable once again this year, though did show they could bleed in their series versus T1. On the other hand, despite EDG being suspected underdogs here, it would have been foolish to underestimate China's best team. With the Summoner's Cup and international glory on the line, both teams were prepared to bring it all to claim the title of World Champions! 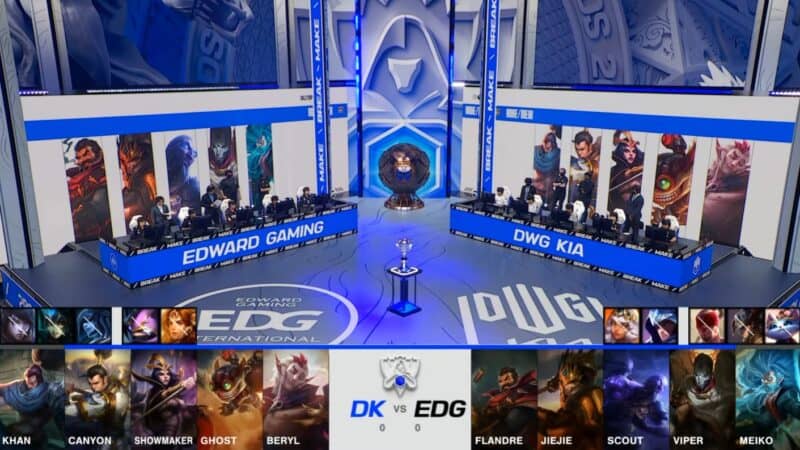 Feeling the immense pressure of the series, the opening minutes of Game One were fairly quiet. EDG were the ones to make the first move, however, as they sent four bot with a Realm Warp to kill BeryL for First Blood. Shortly after that, the teams met at the Rift Herald. Here, DK found a quick pick onto EDG which allowed them to claim the objective too. With it, they took a few plates but didn't do too much damage. BeryL found his revenge at 13 minutes too, when he ganked and killed Scout mid.

All in all, it was pretty even moving toward the mid game. But that changed in a moment. At 15 minutes, DK and EDG fought over the second Herald, but this time EDG was better prepared. With clean team fighting, they killed three from DK and picked up the Herald too. This Herald helped EDG take the First Tower bonus too.  On top of this huge play, EDG was stacking up dragons and setting themselves up for an Ocean Soul.

When DK tried to rush Baron at 24 minutes, EDG thwarted them, but it was a two-for-two kill trade. This meant the game stalled for a few minutes, but not long. At the 29-minute mark, the EDG Soul dragon was spawning, so DK tried to make a play on Baron again. But EDG was ready for the fight, engaging onto DK and slaughtering all five members while losing none of their own. In the aftermath, EDG secured both Baron and the Ocean Soul. With both buffs, EDG slowly picked DK apart and took all three Inhibitors. From this position, all they needed was one last fight to Ace DK once more and smash their Nexus to come out to an early series lead. 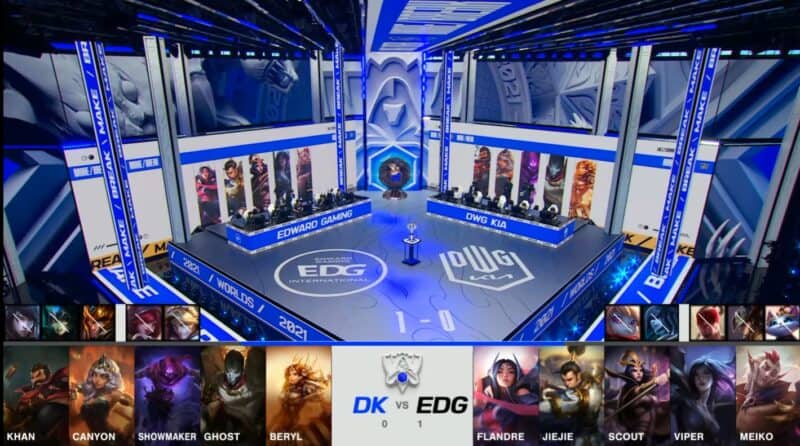 After a surprising loss in Game One, the reigning champs struck back hard in Game Two. Again, the first few minutes were slow, with DK securing a Rift Herald while EDG claimed a Cloud Dragon. First Blood came out at 12 minutes, when ShowMaker locked down Scout with his Malzahar ultimate and killed him with the help of Canyon. This Malzahar pick proved to be a huge pain for EDG, as it set up DK to win two team fights within the next few minutes too.

This was the DK fans wanted to see. Progressing through the mid game, DK continued to apply pressure across the map and give no opportunities to EDG. At 22 minutes, DK forced another team fight at the dragon to claim two more kills and a second dragon. Seeing their opportunity, DK ran straight to Baron and rushed it down. But Jiejie managed to get into the pit and Smite steal it away, though EDG lost two more members afterward.

The steal bought them time but not enough. Five minutes later, DK and EDG met at dragon once more, where DK got another great engage and three more kills. Along with this, DK claimed a third dragon as well as the middle Inhibitor. After resetting, DK repositioned on the map and poked out EDG, which let them move to Baron. They claimed the buff after killing Flandre, then killed two more from EDG too.

As DK sieged the bottom lane, EDG tried to force one last, desperate fight. However, DK was too strong and Ace'd EDG before taking their Nexus and tieing up the series score. With the series tied up at 1-1, this game was crucial to move to match point. As has been the trend so far, the opening minutes were low in action. Finally, at the 10-minute mark, EDG managed to grab First Blood by picking out Khan in a side lane. Although DK responded by slaying an Ocean Dragon, then moved top side to win a skirmish two-for-one in kills. Shortly after, EDG killed off Khan again, which gave them positioning on the Herald, where they claimed both a kill and the objective.

While EDG claimed the First Tower bonus top lane, DK got a kill on Flandre. Over the next few minutes, a few small scuffles and trades happened, but there wasn't a real breaking point. It is important to note though that DK had great dragon control and was at Soul point by 22 minutes. At the potential Soul dragon, EDG had to force a team fight to stop DK from claiming the coveted buff. They tried but couldn't match DK's team fighting, which meant DK killed four from EDG and secured the Infernal Soul.

Now equipped with the Soul, DK was in a dominant position. The game was tense for a few more minutes, until 32 minutes, when DK forced Baron. EDG was forced to respond, but once again, it was all DK as they cut down four from EDG and snagged the Baron. After resets, a hectic team fight broke out in the EDG jungle as the Elder Dragon spawned. Unsurprisingly, DK won it, picking up four more kills before marching mid and ending the game. 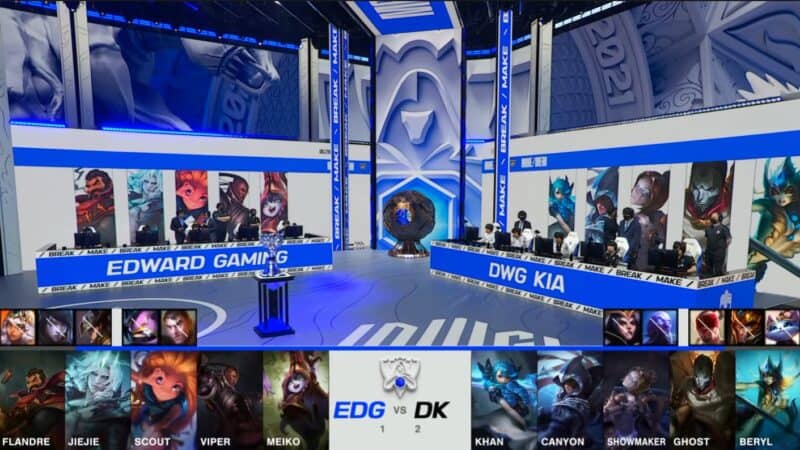 EDG's backs were against the wall in Game Four and had to do it all to make it to a potential fifth game. Things started off well for them, when at six minutes, they caught out Khan in the river trying to heal off of fruits. A couple of minutes later, EDG picked up both the Rift Herald and an Infernal Dragon too. The Herald translated nicely into a few plates and an influx of gold for the Chinese squad. However, DK showed they weren't totally out of it when they dove the bot lane tower to secure two needed kills.

Though that was a power move, EDG hit back with one of their own. At 14 minutes, they knocked down the first tower top, picked off Canyon and took a second Rift Herald. During the next few minutes after this, there were some objective trades but no decisive fights. Then, DK brute-forced a mid lane tower down, and with a sneaky Orianna ultimate from ShowMaker, found a quick kill on Meiko.

Continuing on in the low kill game, EDG amassed three dragons and were looking great. When the fourth spawned, DK attempted to rush it down but Jiejie Smite stole it away and proved he's the better Smite again. With the Mountain Soul, EDG bided their time and, at 30 minutes, rushed the Baron down and secured it before DK could even respond. Off the back of the play, EDG even got an additional kill. Multiple towers fell on the first push, leaving DK's Inhibitors exposed. From here, all EDG needed was to snap engage one last fight in the mid lane before closing in and securing the DK Nexus.

For the first time since 2016, Silver Scrapes graced the Worlds Final as both teams sat at 2-2 moving into Game Five. 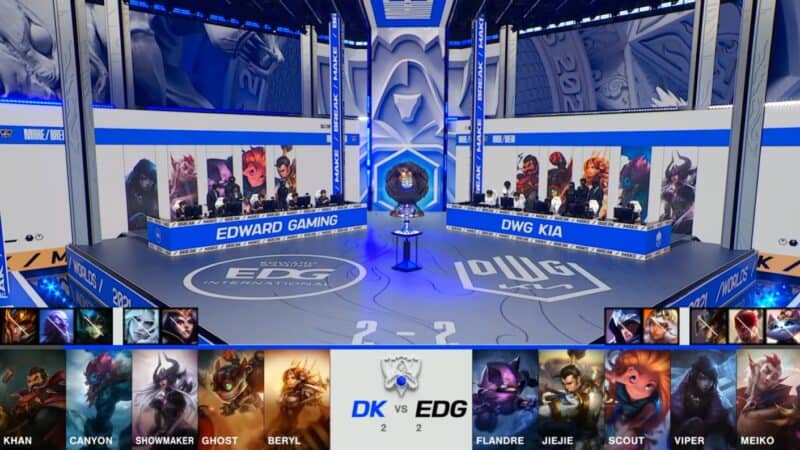 In this fateful Game Five, there was no room for error for either team. The early game was back and forth, as EDG got First Blood in a Rift Herald fight, though DK got the Herald itself. Then, Flandre and Jiejie killed Khan in the top lane. While DK used the Herald to take some plates, then found the First Tower bonus bot lane, EDG claimed a couple of dragons and killed Khan again, setting him further behind when he was desperately needed for the team's AD damage.

In the mid game, things were still very close, though EDG looked to be in a stronger position. This proved true at 22 minutes, when a massive team fight erupted in the jungle and resulted in a four-for-one kill trade in EDG's favor. Along with this, they took a third dragon. A few minutes later though, DK made a crazy play. Khan and Canyon two-man snuck the Baron while the rest of DK distracted EDG mid, and they actually managed to secure it. It seemed like a turning point, however, soon after the Baron fell, DK tried to team fight EDG at dragon and were Ace'd, losing all of their Baron buffs and the Ocean Soul to EDG.

At this point, DK was heavily outscaled and had no answers to EDG. At 35 minutes, EDG easily routed DK another time to find two more kills and an Elder Dragon. Desperate, DK tried to push lanes to buy some time but couldn't do enough to keep EDG from destroying all three Inhibitors. With minions flooding the DK base, it was easy enough for EDG to push forward and after a couple of kills, smash DK's third Nexus.

Just like that, the ever-dominant DK were dethroned and EDG claimed the Summoner's Cup as well as the title of World Champions!