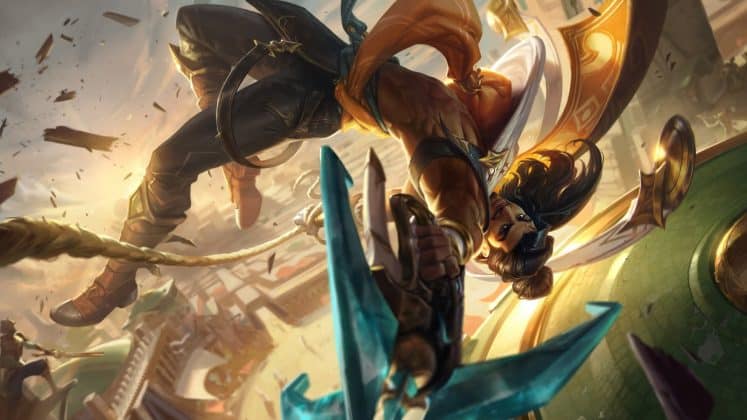 Everything you need to know about Akshan, the Rogue Sentinel.

Akshan has been teased for some time by Riot Games as the “mid marksman with a grappling hook”. With the latest patch, he finally became available for everyone. He stirred up mixed feelings in the community with his paragraph-long ability descriptions, his new mechanic and his unique playstyle, but nobody can deny that he looks and feels incredibly fun. 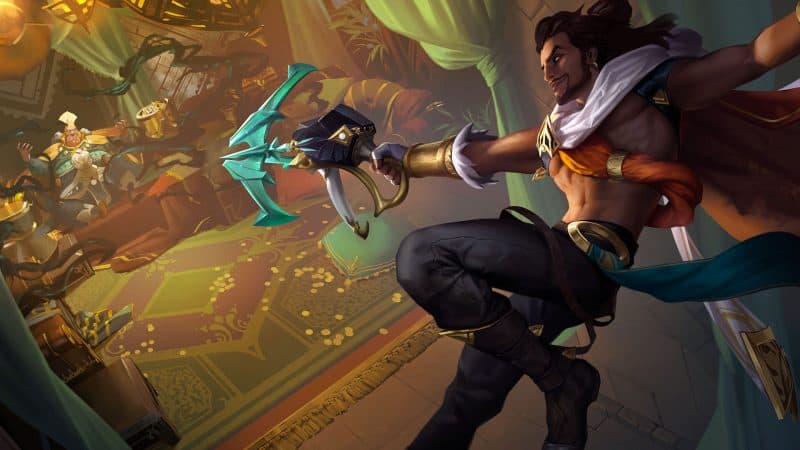 Akshan was a street urchin in the Shuriman city of Marwi, a place that is run by warlords. The people of Marwi had to keep a low profile in order to survive the tyrants. But Akshan had a great sense of justice even from a young age, helping those in need, which meant that he became an enemy of the warlords.

On one fateful day, he was almost killed by the lords of the city, but he was saved by a Sentinel of Light called Shadya. She agreed to shelter the boy if Akshan was willing to learn the ways of the Sentinels. He agreed, and thus began his training. Throughout the years Akshan grew into a great fighter and an honorable Sentinel.

But something big was approaching. Shadya felt that the greatest Harrowing was coming so he and Akshan had to prepare. They entered the Shuriman vault of the Sentinels to gather the sacred weapons of the order, only to find the chambers almost completely empty. The warlords took the artifacts for themselves and refused to give them back even when Shadya explained the graveness of the situation. They had to use what little resources they found in the vault.

Akshan found a strange-looking weapon at the base of the building. His mentor, however, forbade him from ever using the artifact. The reason was that the gun, called Absolver, had a very special power: if a murderer would be slain by the gun, their last victim would be revived. Shadya said that the matters of life and death are not something to be played with, so the Absolver was never to be used. Akshan, however, felt that was unfair, even more so when Shadya told him she saved him with the Absolver – Akshan died before she saved him, but Shadya hunted the guilty warlord down, reviving his new disciple.

Shadya never gave up on getting the other artifacts back from the warlord, which led to her being killed in almost the same place where Akshan fell all those years ago. So the Rogue Sentinel picked up the Absolver, despite the warnings of his master, and set out to avenge Shadya – and by hunting down the warlord who killed her, she would return to life once again.

MORE FROM ESTNN
LoL: Vizicsacsi Will Play At Worlds 2021 With PEACE 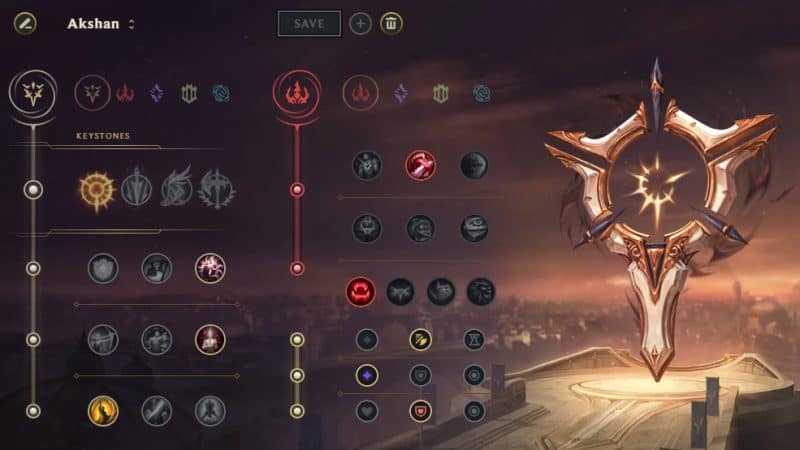 Precision is by far the best Primary Tree for Akshan. He can stack Press The Attack and Conqueror very easily with his double auto attacks and his Q, Avengarang. However, Press The Attack is better because it is easier to activate, and you can continue to deal increased damage or stick on your target with your Grappling Hook, or just your canceled auto attacks, which give you movement speed.

The non-Presicison rune tree which could be used is Domination Primary, either using Electrocute because it can be procced easily, or Dark Harvest if you happen to be a Harvest-player. However, PTA is the ultimate choice as it synergizes with Akshan’s passive perfectly.

Presence of Mind is a great rune for Akshan, as you run out of mana easily by poking your enemy and clearing the wave with Avengarang. But after auto attacking your enemy a few times, you won’t have many problems with mana. Legend: Bloodline is great because of Akshan’s double autos, as he can lifesteal faster than other marksmen. Lastly, from the Precision Tree, Coup de Grace pairs well with Akshan’s ultimate, Comeuppance, which deals execute damage. That ability is best to use on a low-health enemy, and Coup de Grace can help finish a takedown.

In the Secondary Tree, you can try to experiment, but the universally useful choice would be Domination. More specifically Taste of Blood and Ravenous Hunter. Akshan can activate Taste of Blood very easily with his Q, and the extra healing pairs well with Legend: Bloodline. Alternatively, you could use Resolve Secondary in tougher matchups, especially in the top lane, or Sorcery, mainly Celerity and Waterwalking, if the game looks like you will be roaming a lot from mid.

As for the Mini Runes, a standard marksman setup is just fine, changing out Armor for Magic Resist into an AP heavy team or a poking AP Champion in lane. 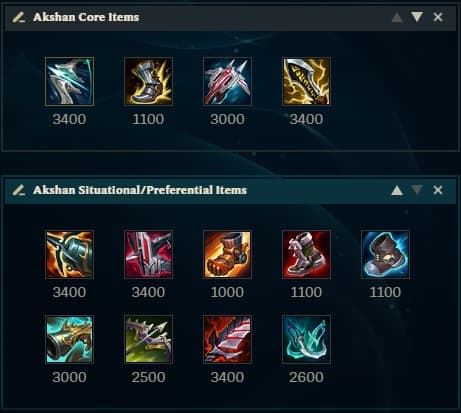 With Akshan, you want to have a strong Crit build as your damage mainly comes from your auto attacks. Even though Akshan has great mobility with his Hook, Galeforce is a favorite choice for the Mythic, as it lets you be extra slippery or chase more effectively. Kraken Slayer can be purchased into tankier comps since it’s fairly easy to trigger with Akshan’s passive. Finally, Immortal Shieldbow is great if the enemy has a lot of divers or assassins. Berserker’s Greaves is great to further amplify your damage, then Lord Dominik’s Regards is one of the best Marksman items, and Infinity Edge really just tops the whole build in terms of damage.

Boots of Mobility is a good alternative for Greaves, which can be later sold for the Attack Speed boots. But for the early game, Mobis are a great way to help your side lanes and get around the map faster with your W, Going Rogue. Of course, if the situation demands, you can buy Plated Steelcaps/ Mercury Treads. The Collector can be used instead of LDR if the enemy team has no tanks whatsoever. But Mortal Reminder is a must into comps with healing, while Bloodthirster and Phantom Dancer help against opponents who want to get on top of Akshan and take him down in an instant. 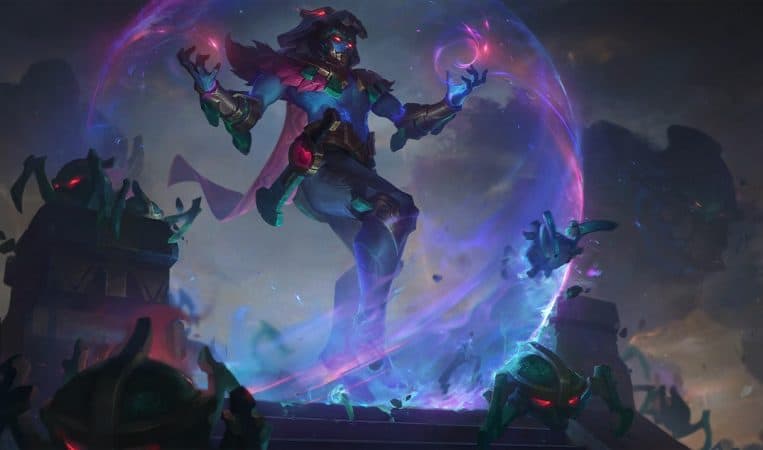 Akshan is League’s newest champion, so data on his counters can be a bit unreliable. However, Akshan’s main power is his mobility, so champions who can lock him down or chase him for extended periods of time are his weakness.

As for the mid lane, champions like Annie, Malzahar and Lux seem to be the most problematic for the Rogue Sentinel. For the bottom lane, carries who outrange him, such as Sivir, Jinx or Ezreal can be a problem, because Akshan can’t really get on top of them if his health is being chipped down in lane. While top lane is not his most popular role, Akshan could have trouble against Champions which can gap-close quickly such as Aatrox, Fiora or Shen.

It’s best to pick Akshan into champions you can get lane priority against, so you can utilize his great roaming potential. Or enemies that have a hard time in the early game, where Akshan can poke effectively with his passive. 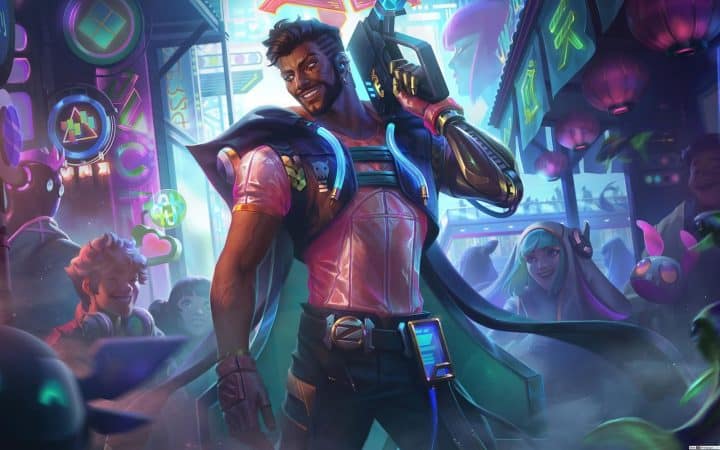 Akshan is the newest Champion in the Rift, so he only has his release skin, Cyber Pop Akshan. The skin, which is part of the same line as Cyber Pop Zoe, makes Akshan a futuristic Rogue with body modifications and a cyborg arm. His color palette is beautiful, even more so with his chromas.

Even though it’s just an Epic skin for 1350 RP, Cyber Pop Akshan has noticeably different effects, having a little squid for his Passive shield, a holographic Grappling Hook, a cybernetic revive animation for allies, and his ultimate has futuristic sound effects. If you like the Rogue Sentinel, this skin is a must-buy for you.

It wouldn't be surprising if Akshan receives another skin in the Ruination event, but it probably won't be a story-skin as we’ve seen for many champions in the past few weeks.