Recapping the playoffs action between Fnatic and Misfits.

It was a battle between Fnatic and Misfits Gaming in the latest round of the LEC Summer Playoffs. This was a do-or-die situation for both of these teams. Lose here and their hopes at the Summer Championship and a ticket to the 2021 World Championship go up in smoke. Who came out on top? 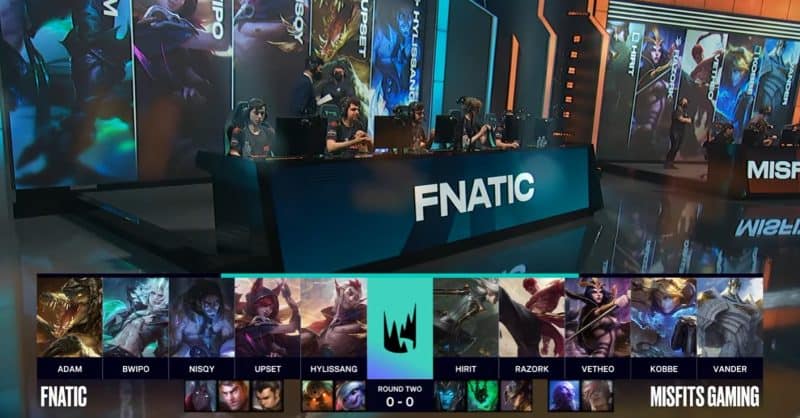 The first five minutes the game went as expected, with very little action. Unfortunately, Adam was down almost 20 CS but the rest of the map was even. The first piece of action came shortly after the sixth minute as Nisqy was able to roam up to the top lane and punish an over-aggressive HiRit. After that, Vetheo was able to pick up a reply kill onto Nisqy.

The early game was going the way of Misfits. They were not only winning the early skirmishes, but they were starting to take control of the map. Misfits were able to cleanly secure another two kills before the ten-minute mark after Bwipo attempted to take down the Rift Herald. Misfits has shown in this game they have a clear understanding of their composition. Both Camille and LeBlanc need to get ahead if they are to be relevant in the mid-game.

The writer's curse was real in this instance, moments later Fnatic was able to pick up their second dragon of the game as well as the second Rift Herald. With the deficit below 1k, it was Fnatic’s mid-game to lose. They had the dragon advantage as well as strong scaling. In the 17th minute, Fnatic put a firm grasp on the game and was poised to win this one. FNC was able to pick off MSF to secure their third dragon of the game.

Despite having a lead in the dragon department, Misfits did a great job stalling the game with multiple picks onto Nisqy. Immediately following the second pick onto Nisqy, Fnatic was able to avenge their fallen friend as they secured a huge team fight victory then go towards Baron. Despite being chunked to minimal health, Razork was able to miraculously steal away the Baron from Fnatic.

While Misfits were able to steal the Baron, it came at the expense of Fnatic being able to secure the Infernal Soul. At this point, Fnatic was too far ahead for Misfits to be able to team fight them on even footing. The game-winning fight came at the 34th minute, where Fnatic was able to pick off multiple members of Misfits in the dragon pit. In what was an eventful game, Fnatic went up 1-0 in this series. 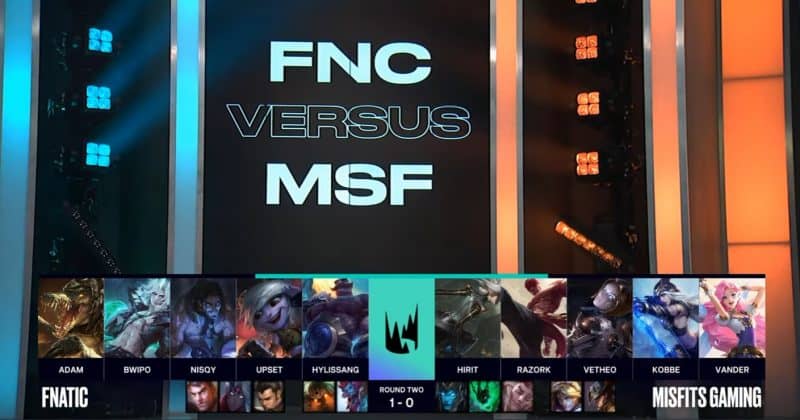 Game Two has easily been the most entertaining of two games thus far. It was Fnatic who would pick up right where they left off, dominating Misfits in the early game. Fnatic had secured multiple kills onto Misfits before the game had even reached ten minutes. Bwipo was already gigantically ahead on Viego with a 3/0/1 scoreline. As the game reached ten minutes, Fnatic had raced out to over a 2k gold lead.

Despite Fnatic starting hot out of the gate, it was Misfits who took control at the start of the mid-game. HiRit was having a great performance on Camille with a 4/1/3 scoreline as the 20 minute-mark approached. In what was a close contest beyond 20 minutes, Misfits Gaming was able to pick up four massive kills at 23:06. On the back of that fight, MSF was able to secure a much-needed Baron that put them firmly in the lead. Two minutes later, Misfits were able to successfully siege the Fnatic base. In what should have been a solid game out of Fnatic, MSF was able to recover well. With the series tied up, it was anyone's game. 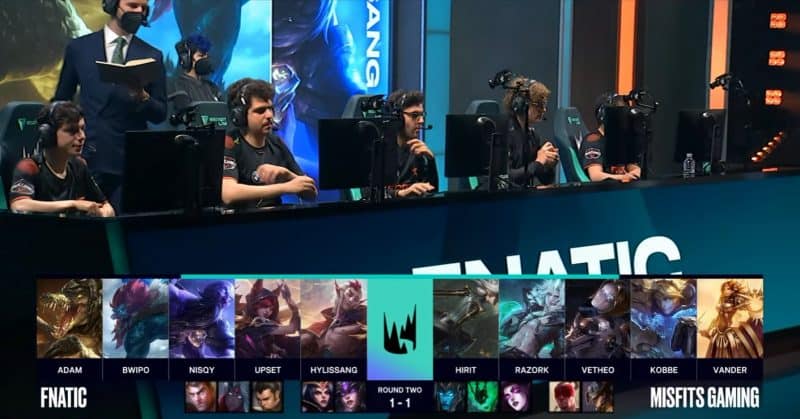 Fnatic started out like a house on fire for the second game running. The former LEC champions raced out to three quick kills before the game reached the fifth minute. While this has been far from the cleanest best-of-five, it has certainly brought great entertainment with both sides pushing each other to their limits mechanically. As the ten-minute mark approached, Fnatic was out to a 2k gold lead, though Misfits did have the only Dragon of the game thus far.

Fnatic was learning from their mistakes in Game Two, Bwipo and Nisqy worked tremendously well as they roamed across the map getting pick after pick onto the Misfits members. MSF simply had no answer for Fnatic’s aggression thus far as they stared down the barrel of a 5k deficit. As the fifteen-minute mark passed, Fnatic was well over 7k in the lead, and while the game was even in dragons, MSF was never in a point to contest Fnatic as they could just win the game off of one team fight. In the later stages of the game, Upset and Hylissang were causing Misfits all sorts of problems; Rakan would engage and combo that with a Trundle pillar into a Xayah stun. 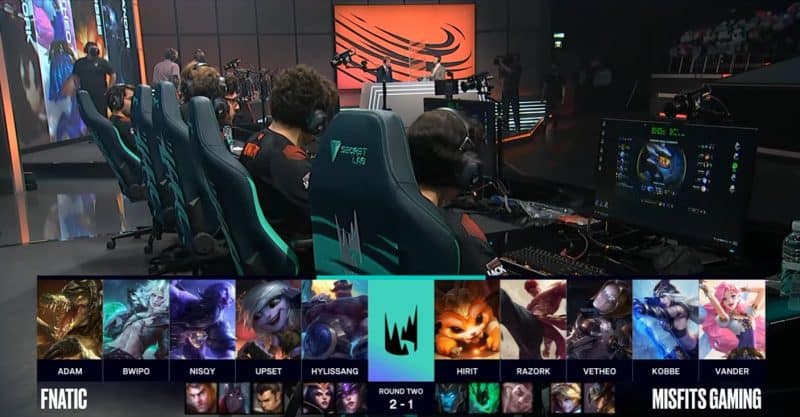 With Fnatic on match point, it was vital for Misfits Gaming to get off to a positive start in this elimination match. Misfits Gaming did just that, securing four early kills as well as Kobbe taking three tower plates in the bottom lane. MSF was up 2k gold before the game had even reached the ten-minute mark. Razork was back on the Lee Sin and was causing Fnatic all sorts of problems.

That lead quickly became a 5k gold advantage as Misfits found consistent picks onto Fnatic in the bottom lane. This is one of the first times this series Misfits have truly come alive in the early game. While a pause did take the sting out of the game, Misfits remained composed as they started to control the neutral objectives.

However, as we all know, Fnatic is never one to go down without a fight. Slightly past 20 minutes, multiple members of Misfits were caught out and killed, giving crucial gold over to Fnatic. Eventually, Fnatic killed two around the Baron then turned to kill the rest of Misfits, getting a couple more kills, but more importantly, Baron Nashor.

Fnatic had their window back into the game but Misfits remained calm and played smart. They minimized the damage to their structures and continued to take Drakes, putting themselves on Soul point at 30 minutes. Three minutes later, Misfits managed to chip out Hylissang and send him back to base, taking the opportunity to secure a Baron of their own along with a three-for-two team fight win.

From here, Fnatic watched two Inhibitors fall, but thanks to Nisqy, were able to take Misfits' top lane Inhibitor. After a successful siege, Misfits went and claimed their Ocean Soul. Then everything went to hell. A base race started as Misfits sieged the top lane, then Nisqy Realm Warped allied minions towards Misfits' Nexus towers. But to no avail. Misfits sent a couple of members back to clear the minions out and with Kobbe focusing the Fnatic Nexus, Misfits took Game Four and sent the series to a Game Five. 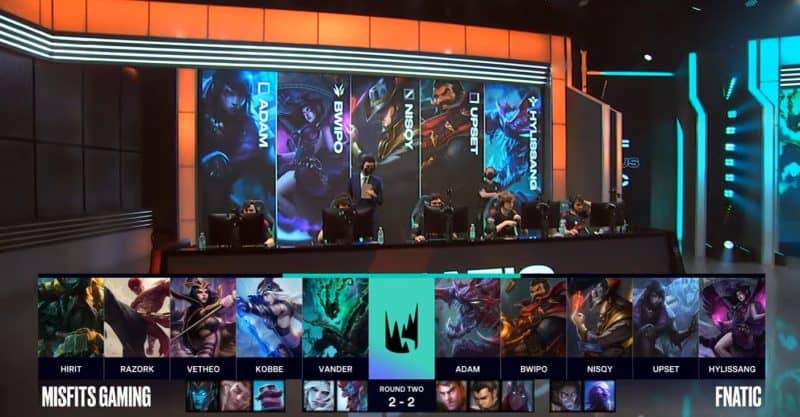 Unlike the last four games, Game Five was fairly slow for the majority of it. Fnatic kicked it off with a four-man play on the bot side to secure First Blood, then shifted focus to objectives. They took an Ocean Dragon, then when they went for a skirmish bot, Misfits struck back and snagged a kill back. But Fnatic kept up the pressure, securing a kill on the top side before claiming a Rift Herald, which was used later for the First Tower bonus.

Then, nothing. Well, not entirely, there were some tower trades and a couple more dragons for Fnatic, but no kills went over until Nisqy killed Vetheo at 23 minutes. The game was effectively at a stalemate as both teams tried to find engages but could never quite make them stick. Finally, at 29 minutes, we got some action. A team fight blew open in the mid lane where Adam landed a four-man Rupture knock-up, which led to three dead from Misfits and the Mountain Soul for Fnatic.

From here, Fnatic looked in a good position to finish Misfits off. At 35 minutes, Vetheo was caught out and killed near the dragon pit as Elder was under a minute away from spawning. After he fell, another team fight broke out, and though Misfits started it off by getting a couple of kills, Fnatic turned it around and Aced Misfits. With all five members down, Misfits could only watch with grey screens as Fnatic rushed down mid, destroyed their Nexus, and kicked them out of the playoffs. Now, Fnatic will face off against G2 Esports in yet another do-or-die match to keep their post-season alive.