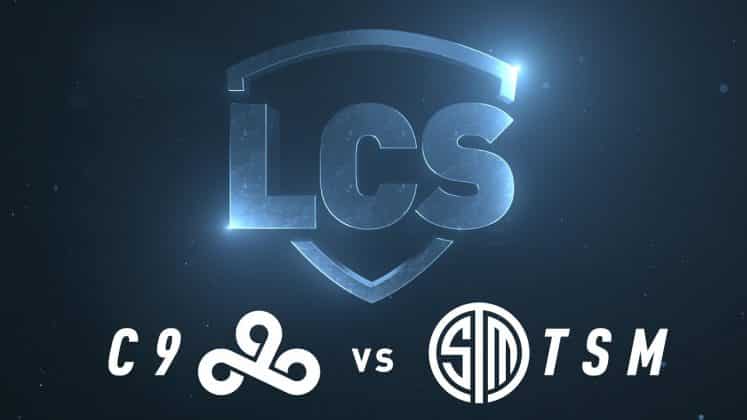 On the same day as the biggest European rivalry releasing its latest chapter, the titans across the sea clash again.

The time has come, tonight Cloud9 and TSM determine who locks in at the last Worlds spot in the LCS Championship. TSM rose to the challenge in the Summer Regular Season, finishing first before playoffs, but falling to the Lower Bracket against Team Liquid. Meanwhile, Cloud9 finished fourth, and even though they were the team attending MSI this year, they fell to the Lower Bracket immediately. Now, both teams are on the brink of success, but only one of the most iconic North-American teams can rise, while the other one will have to attend Worlds as a spectator this year. 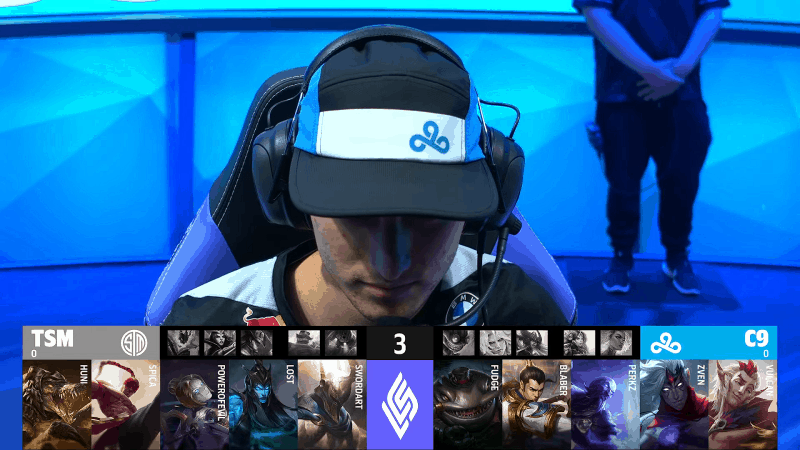 In Game One, TSM looked to spice things up with a Pantheon Support to aid Lost’s Kalista in the bot lane, while Cloud9 picked Tahm Kench for Fudge, who arguably didn’t look so good on the champion.

The match started out slow, the only real event of the first few minutes was Blaber getting forced off the first Scuttle Crab on bot side by Spica, who had his Smite up while Blaber used his too early. Around six minutes, Perkz Ryze ulted most of his team to try and take down TSM’s bot lane duo, but TSM answered perfectly. After PowerOfEvil teleported bot, they took down Blaber for First Blood then hunted down Perkz for another kill. Meanwhile, Huni shoved his wave on top, ready to Teleport for a dive, which was perfectly executed by TSM to give them a 4-0 lead in kills. After a quick one-for-one trade mid lane, TSM took the first dragon.

Spica had great early presence, and after the play on bot lane, he managed to solidify his team's lead. Cloud9 took down Huni in the top lane but lost their bot Tier One turret, so they couldn’t reduce TSM’s net lead. Mid game rolled around and TSM was 5k up in gold. And around the 20-minute mark, another flawless dive solidified their strength even more. Thanks to Spica, TSM got Cloud Soul under 25 minutes, and they looked invincible. Cloud9 tried to start a fight around Baron which TSM countered, taking down two members of the MSI participants and taking the first Baron. After a few minutes, Cloud9 tried to pincer TSM on bot lane, but Lost and co. was too strong. They easily Aced C9 and took the first game.

TSM looked very dominant in the first game of the series, Swordart’s Pantheon became a real threat, dealing more damage than the carries of Cloud9 in some fights. In addition, the whole team looked great while C9 wasn’t too hot. They had to pull some aces in order to find a comeback. Game Two started out roughly the same even in the terms of the draft, with SwordArt’s Pantheon making another appearance after Game One. The early game was quiet again; TSM took the first Drake while Huni successfully avoided a dive from Perkz and Fudge. TSM was proactive throughout the game, being almost as dominant as in the first match, taking favorable fights and the second and third drakes of the game. Cloud9 had a weak early game again with only Fudge being ahead across the whole team.

The Fudge Factor activated around 22 minutes, before the fourth dragon of the game. Here Cloud9’s top laner won a huge team fight with a single GNAR!. After that play, C9 tried to force Baron to find a lead but TSM defended the objective while PowerOfEvil soloed the fifth drake and took Ocean Soul for his team. At 31 minutes, TSM tried to take down the Nashor but got stopped by Cloud9, who won the team fight after initially going even. After the fight, Perkz and his team took the Baron and evened out in gold. At this point, Zven was becoming a real problem for TSM, even more so with Blaber and Vulcan peeling for him.

C9 clutch it at Elder

Around 35 minutes, a fight broke out at the first Elder Dragon, which TSM slay after a long and messy team fight by courtesy of Lost. The TSM Marksman last hit the dragon with C9’s players surrounding him. TSM started to slowly bleed out Cloud9, until Fudge and co. found a great fight at the second Elder while trying to break open TSM’s base. They took the drake, hunted down TSM and won Game Two.

The series started to get interesting here, with Cloud9 showing great team fighting which eventually won them the match. But their early game still looked weak, which TSM knew they could exploit. Game Three looked completely different in terms of the draft. While Lee Sin, Varus and Ezreal got picked again, we saw Cloud9 insta-lock Irelia and Diana, supposedly going into the third match with a plan. Meanwhile, Camille was locked in for Huni, so we could expect some top side attention from Spica.

The drafts looked different but the scales tipped in favor of TSM again in the early game. Just before four minutes, a 3v3 broke out at the top Scuttle Crab with TSM grabbing First Blood but Cloud9 almost immediately evening the odds. Huni Teleported back to grab his second kill, so the Camille train officially left the station. Cloud9 tried to counter TSM’s lead by taking the first dragon, but TSM answered by destroying the first turret in the top lane.

Around 17 minutes, Cloud9 took the third drake of the game but TSM won the subsequent team fight by a mile, taking four lives while losing no players. They also took the two bot turrets, getting a lead of 5k gold. After this, TSM could catch up on the drakes, take control of top side vision, and after a stellar team fight around the Baron Pit, defeated the monster and took off. Four minutes after taking Baron, TSM found another great fight, picking up an Ace on Cloud9 and ending the fastest game of the series yet.

Cloud9 looked weak again in the early game and couldn’t find winnable team fights. The fact that Huni was 10/3 with Camille by the end of the game didn’t help their chances either. Game Four saw some changes in Cloud9’s game plan. They picked up Syndra for the mid lane as well as Gangplank for top, while putting Zven on a comfort pick of sorts with the Jhin.

The match started out with a 2v2 in the top lane which ended in TSM getting First Blood on Blaber. The following 10 minutes were quiet, both teams tried to play it safe and not make any mistakes. Cloud9 took the first Rift Herald but otherwise not much was going on in the early game. It took 15 minutes for the first dragon and turret to fall, as Cloud9 took both of them. At 17 minutes, a minor fight broke out in which both teams lost one member. The match went even for a while after this, until 25 minutes, when TSM took their first dragon while C9 destroyed their mid turret in response.

After this exchange, the teams went at each other but TSM was the loser of the beatdown, losing Spcia and Lost, then watching Cloud9 take the Baron. From this point forward, Cloud9 had the upper hand and a small gold lead, while TSM just tried to find a comeback. PowerOfEvil played out of his mind on Azir, but after he fell, TSM didn’t have much going on for them, losing fight after fight. Even after getting the Baron, they couldn’t bounce back, and at 41 minutes, lost a crucial team fight which cost them a game.

Game Four definitely was a quieter one, with Cloud9 making smarter choices and waiting for the midgame where they could really shine. TSM failed to find an early lead big enough to carry them to victory, so they had to fight in the fifth and final match of the series. Game Five had both teams bring out the big guns. Cloud9 played on their most comfortable picks, with Fudge finally picking Gwen for the first time in the series, while TSM picked Nocturne and Ryze while locking in Kalista and Rell for the bot lane. Spica picked Lee Sin for the fourth time this series but it worked out very well in the previous games, so it was not a bad idea.

Cloud9 took initiative with Perkz Teleporting top lane around four minutes just to deny some minions from Huni, as they had no realistic chance of taking him down. After a good TP play from Fudge towards their Razorbeaks and winning a 2v2, they took First Blood. However, the bot lane of TSM took down Zven and Vulcan in a beautiful 2v2 which ended up getting the first dragon for the team. At 12 minutes, both teams headed top lane, and in the fight, Cloud9 took Lost down. After a few minutes, another fight broke out in the northern part of the Rift which ended in a one-for-one.

Cloud9’s lead was growing by the minute, so TSM tried to bounce back by initiating a team fight 4v5, but couldn’t kill C9’s members before Fudge could arrive and lost the fight. After this, Cloud9 was so far ahead that TSM couldn’t really do anything, as Lost was the only member on the team who had some items and some ability to fight. At 24 minutes, C9 had a 10k lead, and there was no turning back. Perkz and his team took down Baron after getting the top Inhibitor, stormed in from both lanes and took down the opposing team, along with their Nexus.

That concludes the showdown between the LCS’s most renowned teams. TSM started out the series great and it honestly could’ve easily been a 3-0 for them. But Cloud9 managed to stay afloat and pull themselves together by Game Five. The last match was clearly a Cloud9 special with great performances from Fudge and Perkz. They're locked in for Worlds at the last place while TSM has to spend the Fall at home, thinking about what could’ve been.

Hopefully, Cloud9 will have enough time to prepare for the World Championship, as they had some obvious weaknesses in this series, as well as the season as a whole. The two losses were very hit and miss, while the first two wins they lost hard early and had tocome back late. However, if they can perform like in Game Five against the rest of the LCS teams and in Worlds, there should be no problem.

You can catch Cloud9 playing against 100 Thieves on August 28 in the Lower Bracket Finals!