Week one of the LEC is here, and it's starting with a Super Week. Here's our LEC Super Week Day 2 recap. 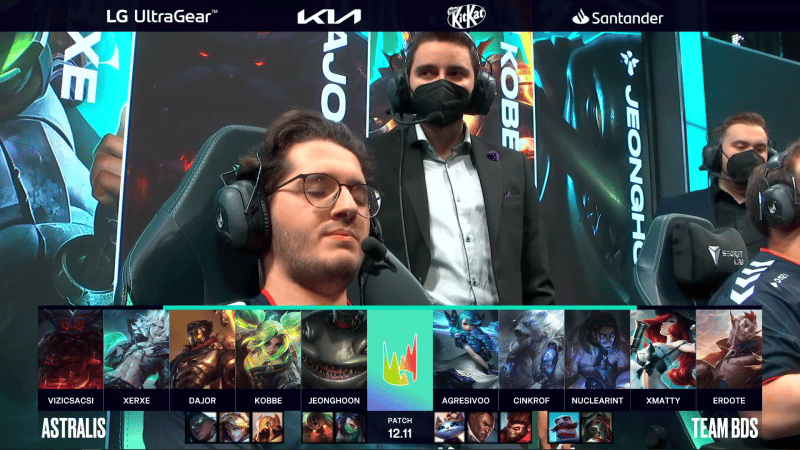 With both sides failing to win on day one, this matchup could be a huge momentum shift for the winner. BDS secured the first blood, with a 2v2 in the bot lane. That was about all the action we got for the first 15-minutes, with just 300g separating the two sides in favor of BDS. The third Drake finally gave us some action, with AST claiming a second Drake. AST continued to come into the game, winning another series of fights, before moving to claim their third Drake. Soul Drake was the next objective, this time, however, BDS shut it down, though they lost four members as a result. AST turned their attention to Baron, with BDS, not on the map. With Baron, AST knocked down two inhibitors before resetting to end the game. BDS were unable to stop the advance as AST claimed victory. Two sides that won their opening fixtures faced off, with MAD the strong favorites. It took until the 12-minute mark, but MAD were the ones to finally break the deadlock. MAD followed this up with a huge team fight win minutes later, as they marched ahead to a 3k lead. With 3 Drakes secured by the 20-minute mark, MAD already found potential win conditions. However, SK forced MAD into a fight with the Soul Drake about to spawn. The Drake and ace were secured by MAD as they moved towards the Baron as they found a way to win. MAD used Baron to assault the SK bot-lane, and with the ace secured once again, SK are knocked off the Rift. A slow start to the game but a crushing victory for MAD. Another two sides that lost on day one, VIT needed to get a win on the board. VIT got off to the perfect start, securing the first blood and getting an early 1k lead. 10-minutes in and VIT had a 3k lead, with MSF already on the back foot. More wins for VIT, another fight win as VIT shut down MSFs' Drake claim. VIT looked unstoppable, with Baron spawning they moved to over 5k ahead with MSF only securing 2 kills. VIT forced a fight in the mid-lane with Baron on the map, knocking down four members of MSF and claiming the Baron. VIT pushed into the MSF base, with three members down they knocked down two inhibitors before turning their attention to the Nexus. The win is secured, as VIT got on the board for Summer Split. The battle of Britain, as XL and FNC face off in the Super Week. Both teams got off to winning starts in Summer Split, but who could pull ahead on Day 2. XL got the first blood, as they took the early advantage in the bot lane 2v2. A bloody early game, with just 7-minutes on the clock we'd had 7 kills already, with a slight lead secured for XL. The game remained active moving into the mid-game, with XL maintaining their lead while increasing the gap to 3k. XL were starting to look unstoppable in the team fight, winning another 5v5 with 19-minutes on the clock. Baron was secured for XL, as they looked to end FNC. They pushed into the FNC bot lane, and with a few kills secured it was enough for them to claim one inhibitor, before backing away. With Baron having dropped off, XL once again looked to push down the FNC base. All three inhibitors were dropped and that was all she wrote for FNC. A huge win for XL, securing just their second win ever against FNC. The game of the week, between the two Spring Split Grand Finalists. The first 10-minutes were relatively even, despite RGE having the extra kill they only had a 200g lead. By the mid-game, G2 started to get a grip on the game, taking a lead but giving over two Drakes to RGE. G2 forced a play around the next Drake, with a 2-for-2 fight in kills RGE were able to claim their third Drake putting more pressure on G2. The next play is forced by G2 around the Soul Drake, this time caPs is able to clutch the fight for G2 as they stop the RGE win condition and ace RGE. G2 claimed the Baron, and with the buff and their 10k lead, G2 looked to end the game. Acing RGE for one final time as G2 claimed the win.