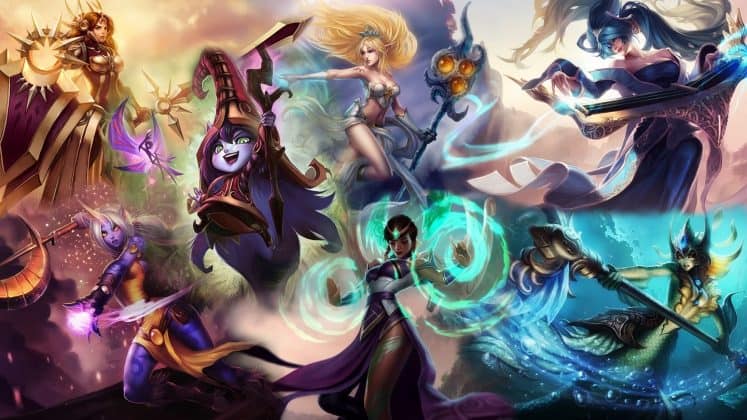 The support role in League of Legends is either the easiest or the hardest depending on who you ask.

For this tier list, our focus is on creating a standard tier list for general play. This list is not patch specific, however, it will be added too as new champions join the Rift, champion reworks or a new season begins.

This is the best of the best. Simply put these champions are going to be fairly safe in most matchups, which makes then decent first picks. These picks can also fill specific roles that can be taken advantage of later in the draft.

Janna & Nami - Janna is the queen of peel, Nami is like the princess. Janna has the perfect kit for champions that will look to get on top of your ADC/carry. Her Q, W, and ultimate give her 3 incredible tools to protect your team. Nami is similar, though mostly focused on her Q which is a skill shot. Her heal is also great in team fights, especially if you can get it to pounce 4 times and her E will allow your team to chase down.

Lux, Naut & Ali - Lux is still the best AP support in the game. Her kit allows her to carry but at the same time offer peel and a shield. Her ultimate is also a great snipping tool. Alistar and Nautilus are the safest tanks for support. Nautilus especially has possibly the easiest kit in Lol to execute upon and has some decent tanky stats to boot. Alistar is the dive tank, his ultimate has unbelievable damage reduction. He also offers lane sustain, peel, and engage.

Strong champions, made stronger in specific situations. These champions should see you through most situations fine, but get a “level up” when playing into the correct comp or with the right partner.

Rakan, Blitz, Leona, Thresh - Here you get your tanky core. These 4 champions will do a solid job, though maybe not as safe to pick as Nautilus and Alistar. Thresh is going to take practice, Rakan needs a team that can follow up, same for Leona. As for Blitz, well, you need to pick your target. Picking him into a tanky bot lane or maybe an Ezrael is not ideal. Look to abuse his grab against slower lanes, and make sure not to grab melee carries such as Yi into your team.

Karma, Lulu, and Soraka - These 3 shield/heal supports are ideal into certain comps. Lulu is amazing with hyper-carry ADCs, Soraka is great for poke and keeping your team alive, though she lacks decent peel outside of her silence. Karma is like Lulu but with slightly more utility. Her level 1 damage is also worth a mention, and her AOE shield, when used with her ultimate, can turn a fight.

Brand - Sits on this list as a higher damage Lux, but one with fewer supportive qualities. Really he should be on B, but his high damage AOE skills set and Q stun just sees him make A.

Decent, especially when mastered, not always ideal blind picks. Here’s where we start to get into the slightly more specialized picks. These are still strong supports, just ones that need an air of caution.

Sona - really Sona is an A tier champion with such a poor early lane phase it makes her worse. Late game Sona is a beast, she can let out a constant barrage of damage, healing, and speed, and her ultimate is one of the best CCs in the game.

Yuumi - is probably the most unique support champion in the game. If you play with a duo, she’s pretty nasty. You can act as the eyes and ears of ADC friends and take double offensive summoners to make a deadly bot lane. Using her in solo queue comes with its downsides. Try to look to pair her with Twitch, Eve, or Shaco for some cheese.

Senna and Bard - Senna is a marksman support, as such you need to practice her to fully utilize her kit. For a lowdown of how and when to use her, check out our support guide. Bard is another champion who needs practice. His kit means he’s best when roaming the map, be clear with your solo queue ADC that you’re leaving lane or they will get killed.

Picks that require some synergy or pre-planning. Not always ideal first picks, though can sometimes have some flexibility as enemy team may not be aware of what role you’re playing.

Swain - Swain has really lost his way as a mid/top laner in recent years of LoL. Recent reworks and mini-reworks have really just made him a better support. Ideally paired with a team with heavy CC, Swain does solid damage and has good lane harras and sustain.

Pyke - much like with Senna, Pyke falls into a different playstyle to most supports in that he’s an assassin. Ultimately his kit is based on roaming the map in stealth and using his ultimate to snipe people and provide huge gold to him and his team.

Zilean and Galio - both of these supports work for two reasons; their ultimates and heavy CC. With Galio you gain and AOE taunt and semi-global ultimate. For the latter, you’ll be able to quickly help your jungler if they invade, or dash to mid lane to save the day. Zilean, like Galio, is mostly all about his ultimate, this time giving you the ability to revive your key carries, often used in the early game to bait enemies into overextending.

Very specific situations or if you have mastered the champions in Support. D tier isn’t technically bad, but it’s important to understand why you would pick these champions.

Sett and Pantheon - both of these champions fall into the role of not really being good tanks, or doing that much damage but having annoying lane cheese. We’ve done guides for both Sett and Pantheon, but the core of what makes these two work is that Pantheon can point-and-click stun you and land big DPS, while Sett can run at you and pull you in.

Annie - really Annie is a CC machine. Her 5 stack passive stun combined with Tibbers or her AOE is really powerful. Really, Annie is going to be best for people who want to play AP CC but feel most comfortable with Annie. It could also work as a flex pick.

Maoki and Shen - these two are for if your team badly needs a full-tank. Shen’s global can be well utilized by support players, though you will reach 6 much slower. As for Maokai, his ultimate is great for big team fights and his early CC is very strong. An added bonus comes from his bombs which can grant vision of a bush in a tight spot.