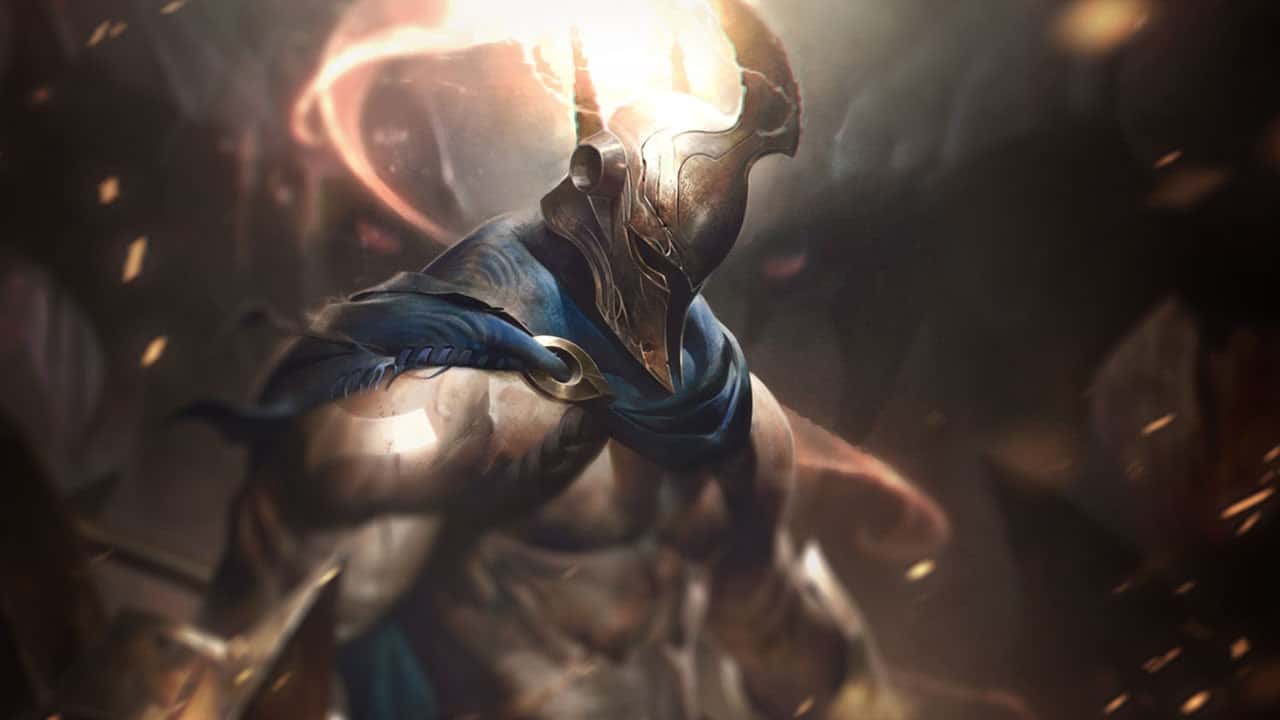 Let’s take a look at one of ‘cheesiest’ support champs, Pantheon, The Unbreakable Spear.

Pantheon support has regained popularity during season 10, and especially so during Summer Split in professional play. Mostly seen as a top lane bruiser, Pantheons point and click stun, ability to tank tower shots and solid burst DPS, has made him a surprise cheese pick in the bot lane.

Passive — Mortal Will — Every 5th ability or AA will grant your passive. At 5 stacks each of Pantheons abilities are enhanced. Crucially your stun will cause you to land 3 quick basic attacks, getting you back to 5 stacks again faster. You’ll also gain 5 stacks after spawning in the fountain and when you use your ultimate.

Q — Comet Spear — Mainly used as a poking tool at early levels, and a way to close the gap or slow enemies as the game goes on. A quick tap of the Q will send out a short-ranged AD attack. Holding, then realising the Q will throw out a spear, if you have 5 stacks of your passive it will also massively slow the target.

W — Shield Vault — Pantheon leaps at the target, stunning them and landing a strike. If he has 5 stacks of his passive, he’ll land 3 hits. Your W is your entire reason for being a support. Easy to land, impossible to avoid, and a fairly short CD. Your W is also the best use of your Passive. Jump in with 5 stacks, then quickly get back up to 5 stacks to either slow the enemy with Q or land another W.

E — Aegis Assault — Blocks all attacks in the direction you are facing. The shield is key to allowing Pantheon to take tower hits, providing he is facing the tower. This is also a great tool for sustaining poke. Jump in with your W, land an auto and a Q then retreat with your E. Rinse and repeat if the enemy lane steps out of line.

R — Grand Starfall — Learning to fully utilize your ultimate is key to moving into the mid-game. Your damage will fall off, you won’t be carrying team fights with Pantheon support. Learning when to use your ultimate will come with practice. The key is learning to read the map, using it to cut off escape or just to jump into a fight quickly. Avoid using it as a fight-changing damage ultimate and you should be ok.

Let’s get a cheat sheet on the go for those who just want the build, skill order, runes, and items at a glance. 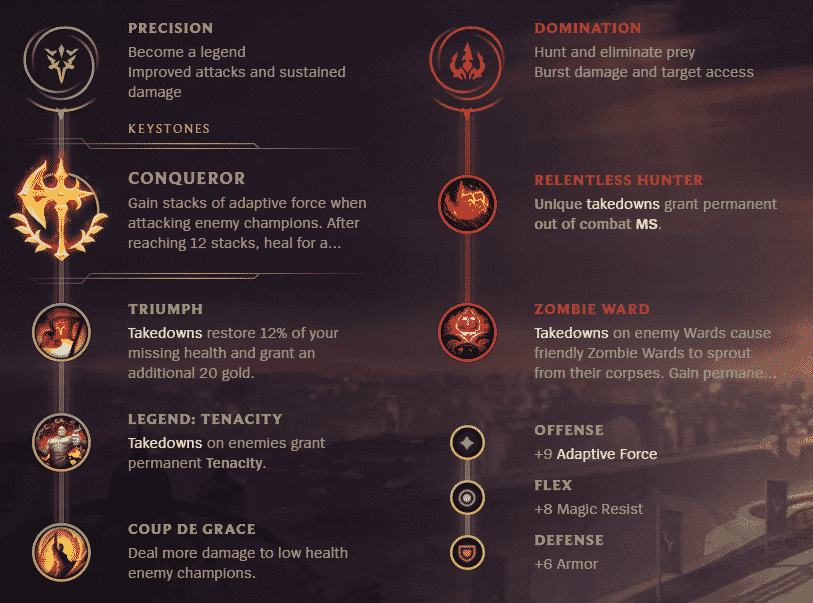 This is the standard page you’ll want to run with Pantheon support. It gives you good sustain with Conqueror and Triumph and giving you damage to add to your burst. The tanky bottom runes can be changed based on the comp. Domination is fairly standard for secondary, though you can dip into Resolve for some added tackiness. Still, Pantheon isn’t a tank, so it isn’t likely to help much. 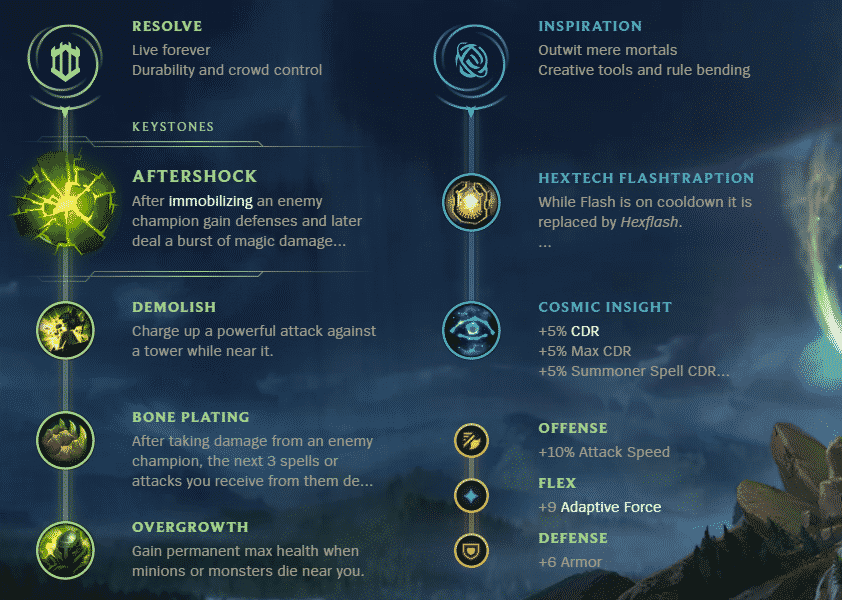 This is the standard tanky/lane phase build for Pantheon. Your E will proc aftershock and give you some solid defensive help. The resolve tree also scales well into late game and play into his late-game tank playstyle. Inspiration is used, like in our Sett guide to give you Hexflash to help land more dangerous stuns. Aftershock isn’t a big on Pantheon as it is on Sett, however, it does work if you need to be tankier.

Start W>Q>E then max Q>E>W. This is the only option for Pantheon support. Your W is a must at level 1, it will allow you to invade, defend invades and crucially, level 1 lane dominance. The Q will allow you to do huge damage at level 2 with your E at level 3 finishing off the full kit.

Q max is key because it’s your main poke, AA reset and main damage source. Your W will never gain increased stun duration, so putting points into E second will get the CD down of your escape tool and reduce the damage you take in team fights.

Always make sure to spec R at the appropriate levels.

These 3 items are key to your early build. In some cases, you will want Mercury Treads if the enemy team/bot lane has high CC, and Ninja Tabs if you come up against big AD damage. The rest is pretty much standard, you’ll need the early Lethality and ward clearing assistance that you’ll get from Umbral Glaive.

Dead Man’s Plate is mostly always taken, both the movement speed and tanky stats are nice after building early lethality. After that, you’ll want to look to get some tanky damaged items. Guardian if heavy AD, Maw if heavy AP and  Edge of Night is a good alternative to Maw or taken alongside it if you come up against heavy AP. Black Cleaver if the enemy team has a big tank and you need to help your team breakthrough. An item not listed, but that should always be looked at is Executioners if the enemy team has healing. 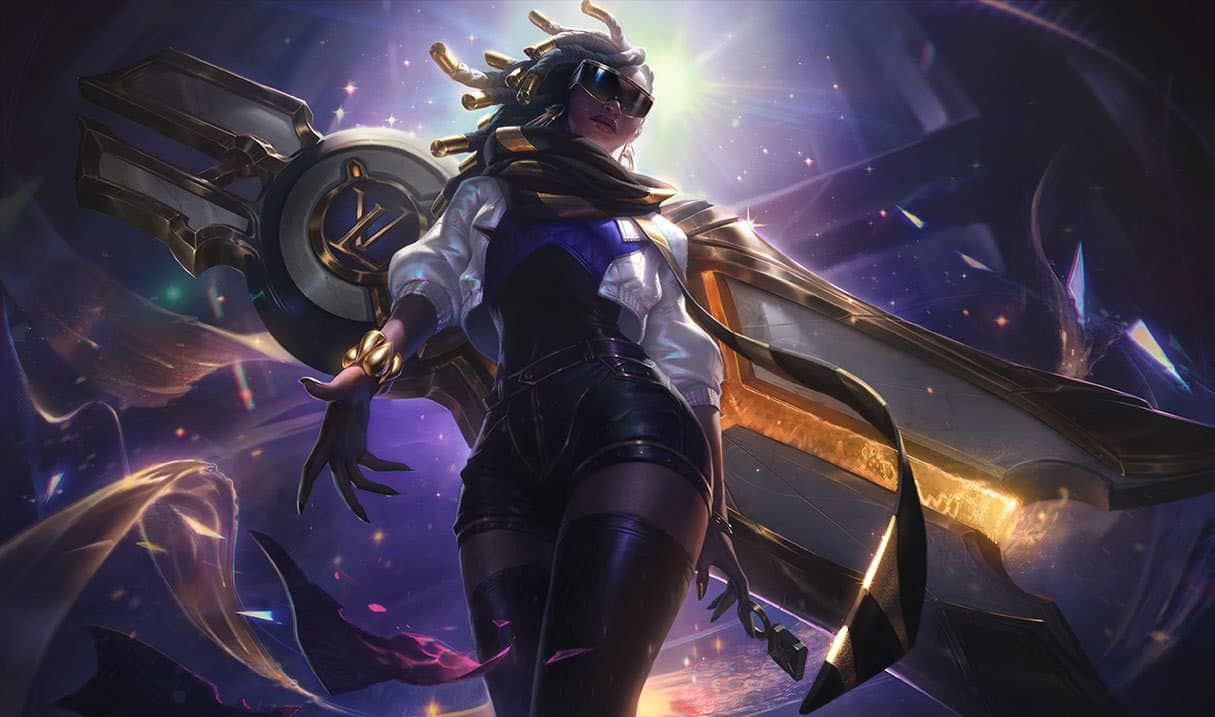 Pantheon, like most melee supports, does not like ranged supports. While most are just enchanters with decent range but lacking damage, Senna is in a league of her own. We’ve done a full guide talking about Senna, but her Glacial build is a near-guaranteed lane loss for Pantheon.

Other heavy AP poke champions are also going to be a nightmare for Pantheon. Pantheon is not a good blind pick, while he can be flexed into multiple lanes, he’s not currently (patch 10.16) in the meta, so most enemy teams will know you’re going support.

Ideally, look to pick Pantheon into other “tanky” melee supports, or against enemy ADCs with poor mobility, especially if you’re laning with an ADC that can CC the enemy laners.

Check out our other League of Legends Support guides here:
Sett - Senna