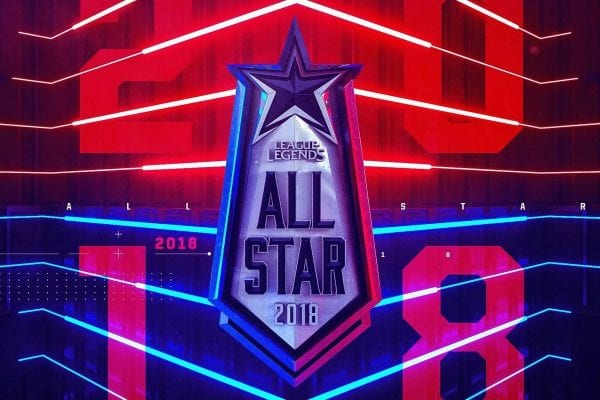 With a fun-filled opening to this year’s 2018 All-Stars event, day two finally came around and with it, a continuation of yesterday’s tournaments and more memories to be made. The day will feature the finale of the Charity 2v2 tournament, another Tandem, and Nexus Blitz match, as well as both the round of 32 and the round of 16 of the 1v1 tournament.

A reminder of the rules of the 2v2 tournament, each duo can defeat their opponents in three different manners. They can win via killing two opponents (2 Kills Victory), by killing 100 creeps (100 Creep Score Victory) or by destroying the first turret (First Turret Victory).

With their victory over Captain Jack and Faker, Voyboy and Doublelift were awarded a large cheque worth $100,000 USD for the charity of their choice. The duo chose to support M3 Tent Events, which works and advocates for mental health-related causes. 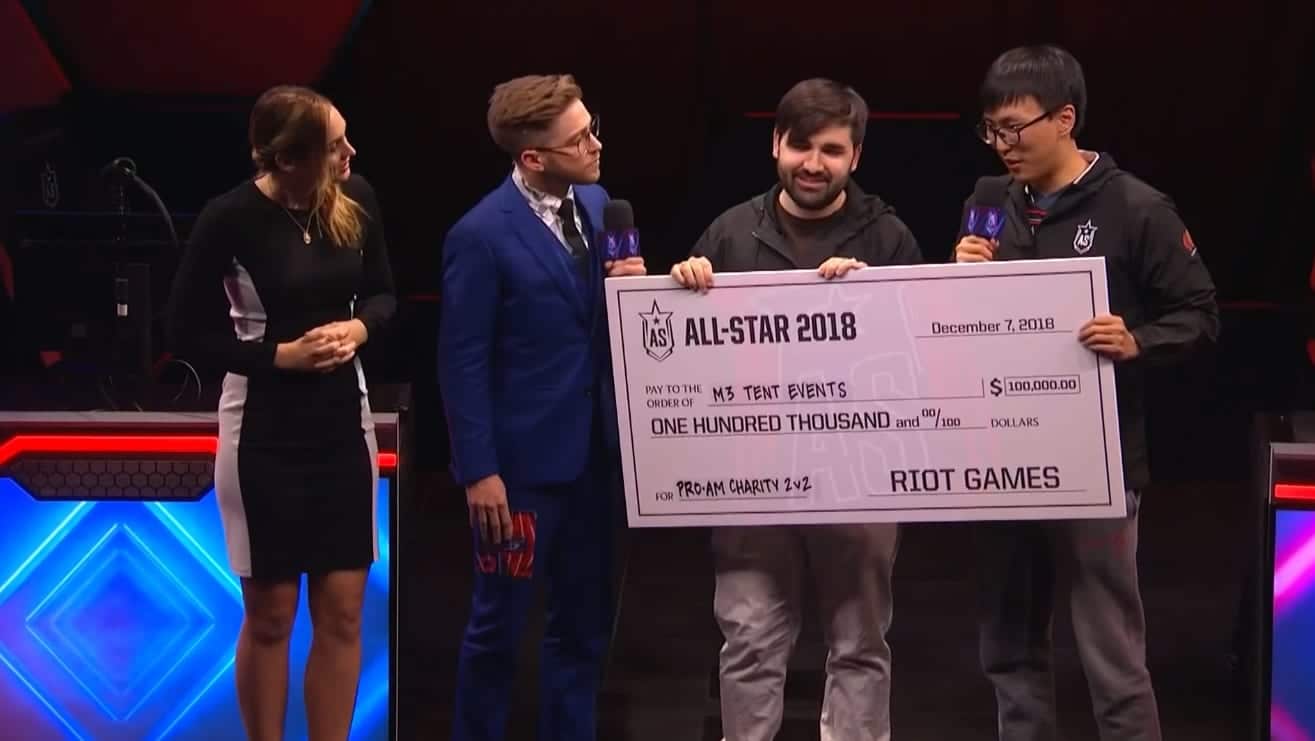 With the second day of the All-Stars event came the second game of the Pro-Am Tandem mode where a professional player would be paired with a League Partner of their region to control a single character, having one person on the mouse and the other on the keyboard. Team Blue was comprised of “Jukes” and “Rakin” (Jax) in the top lane, “Sao Nan” and “Rookie” in the jungle (Dr. Mundo), “Ness” and “Seiya” in the middle lane (Anivia), “Candice” and “Uzi” as the AD carry (as Twitch), and “BunnyFuFuu” and “Licorice” as the support (Thresh). The Red team featured “Misthy” and “Artifact” in the top lane (Vayne), “Broxah” and “Gripex” as the junglers (Lee Sin), “Lastpick” and “Plugo” as the mid laners (Lux), “Bebe” and “Westdoor” as the AD carries (Yasuo) and finally, “Dumbledoge” and “KFCeatbox” as the supports (Pyke).

MORE FROM ESTNN
LCO Will Have To Go Through the PCS Playoffs for Worlds Participation, Starting With the 2023 Season 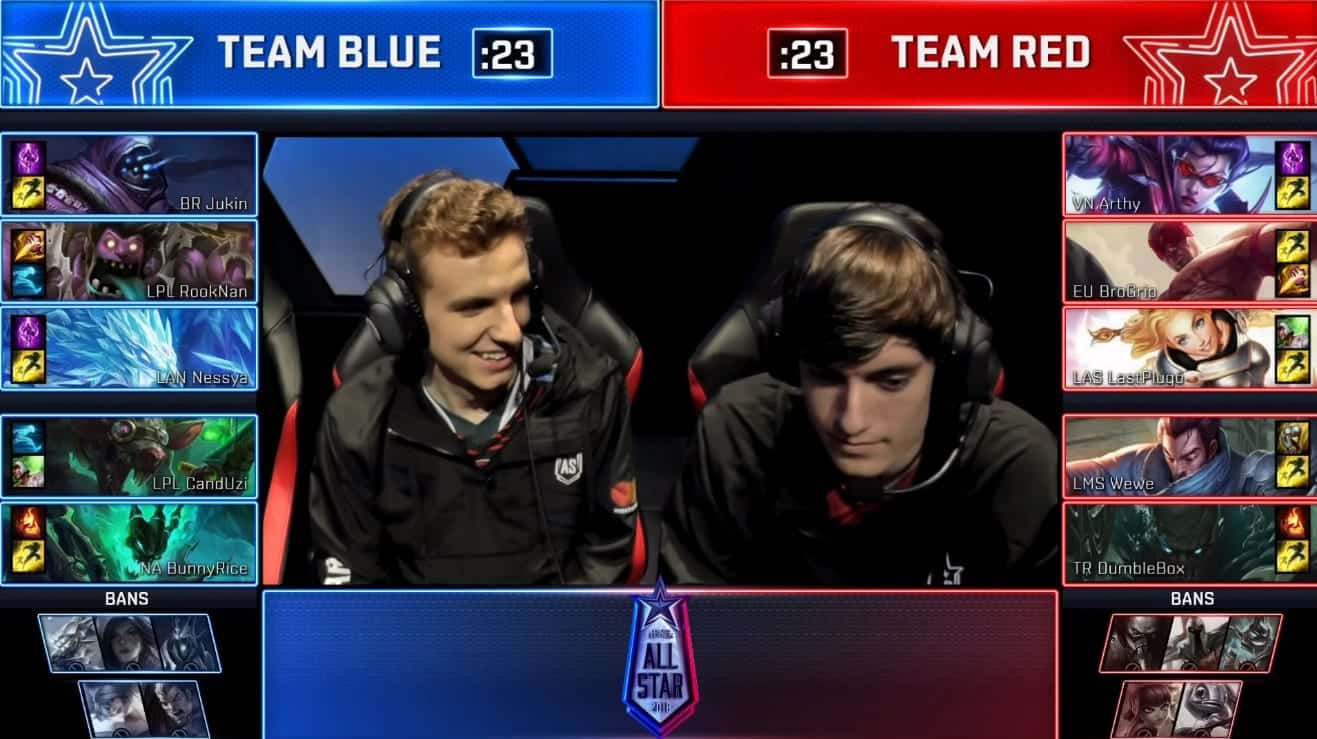 The winners of the event were the Blue team, finishing the game 7 turrets to 5, 68.3k gold to 71.9k, 3 drakes (one infernal, one ocean, one mountain) to none, and 48 kills to 51 kills against the Red team who were in the lead for the majority of the game until losing at the 32-minute mark.

Continuing the tournament that started the day before, the competition aimed to reduce the number of competitors once again by half. Tournament rules are roughly the same as the 2v2 tournament, the only difference being that only one champion kill is required for the victory rather than two kills.

Following the round of 32, a break was taken for a less competitive event as the second Nexus Blitz match came around. As per the name, each team was made up of both professional players and League Partners alike, battling to destroy each other’s nexus’ while competing through a string of events during the game to boost their chances of winning. Teams were named after their respective sides once again. The Blue team was made up of KR “Peanut” jungling as Amumu with KR “Bitdory” as Hecarim to assist him, having LMS “Westdoor” as Zed, LAS “Lastpick” selecting Malphite and LAN “Seiya” Kennen to round off the laners. The opposing Red side had NA “LuxxBunny” laning as Ahri with LPL “Rookie” as Akali and LPL “Fireloli” as Kled with NA “Sneaky” in the jungle as Neeko alongside EU Caps as Master Yi. 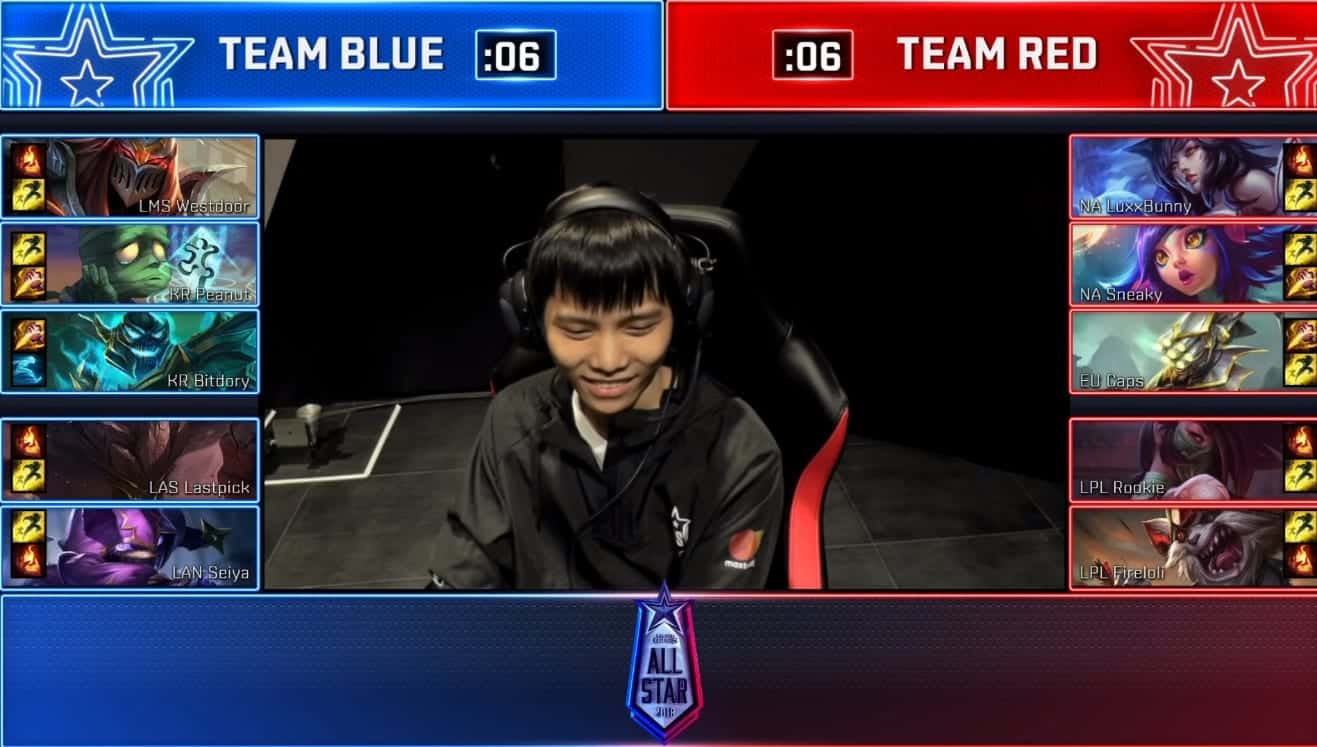 The winners of the Pro-Am Nexus game were Team Red in a surprisingly close match despite winning every event that went on during the game. The match lasted just over 17 minutes, and EU Caps spectacularly ended the game, earning himself a Pentakill to ace the enemy team and win the game.

The rest of the tournament will be broadcasted tomorrow during the Day Three stream. Someone will be crowned the King of the Abyss and awarded a beautiful Draven Axe trophy for the winning the tourney.

For specific timestamps, you can find them below:

Image Credit to Riot games via their official live stream 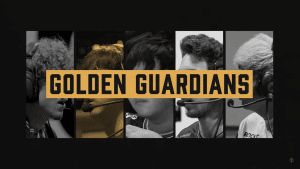 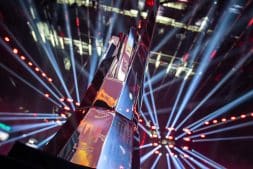 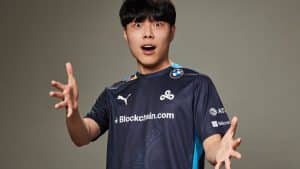 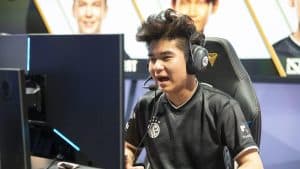 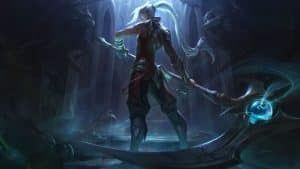