“I’m Still In Shock That We Won.” — An Interview With Team Delirium Player & FNCS Champion Justice 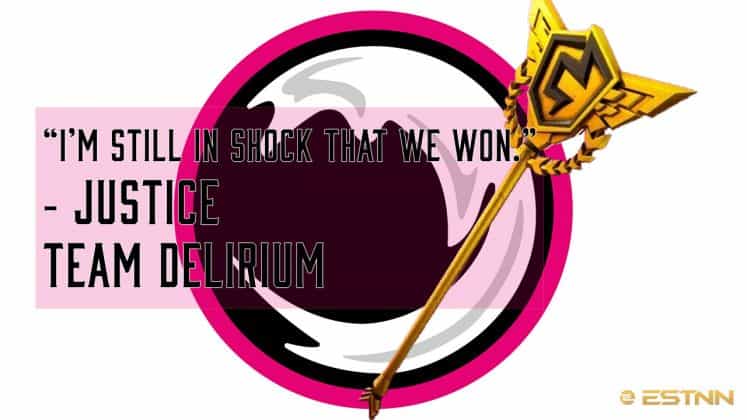 Fortnite’s tenth seasonal Fortnite Championship Series (FNCS) has come to a close at the tail-end of Chapter 2 - Season7. The game’s seven worldwide server regions crowned seven champions, all of whom collected a portion of $3M USD and the elusive and ultra-rare Axe of Champions in-game reward.

Season 7 provided everything that competitive Fortnite fans wanted to see. Intrigue, drama, conflict and triumph — just a few of the many words we could use to describe the latest FNCS outing. Surprisingly, underdogs became a significant theme this past weekend, and no story outshined that of NA East Champions Justice, Userz and Dukez.

ESTNN had the chance to speak with Team Delirium member and FNCS winner Justice mere days after earning competitive Fortnite’s ultimate prize. We asked him about his FNCS experience, the difference between Fortnite in Season X compared to now and much more.

How’d you come to team with Dukez and Userz this season?

Userz and Dukez asked me in the middle of the season to trio. I knew them both previously and I knew how talented and incredibly skilled they were at the game, and I had a feeling we could make for an amazing team, so I had no hesitation in saying yes; Essentially me and Deroller swapped trios. It was a great call, as when I made the swap with Deroller, it gave me the opportunity to have a drop spot, which was uncontested, which gave me a massive advantage alongside my trio, as we didn't have to fight against another team from drop. Potentially one of the main reasons we won Grands.

What were your expectations heading into the FNCS Qualifiers?

After winning Heat C, how did your trio prepare for the Season 7 Finals?

After winning FNCS heats we prepared heavily on storm surges which is the most important aspect in a Grand Finals. We had to learn strats and how to get a lot of storm surge tags.

Did you expect to win or were you more or less aiming for a top-three finish?

I didn’t expect us to win because there were a lot of talented teams in the grand finals. I knew we could have done really well like top 7, but didn’t really expect to win the Grand Finals itself. I am still in shock that we won, considering we were up against many great players in many big organizations like FaZe, NRG, TSM, Liquid etc.

Holding the Lead on Day One & Claiming Victory

How did you feel after leading at the end of day one? Did you have any particular strategy heading into day two?

After day 1 our whole team was really excited and knew we had a good chance to win FNCS.

We were not too confident that we won because we still could have choked and ruined our chances of winning. However, we had a good feeling as we did have a 50 points lead against 2nd place on day one. We had no particular strategy, we just used our experience and skill.

At what point did you know that your trio won the FNCS?

Where do you go from here? Any plans with the money? Will you take time off from Fortnite?

I’m going to keep playing Fortnite and carry on competing. I really enjoy the competitive side of Fortnite and all its tournaments. I’m probably going to save all my money and invest it into things that will help me prosper more in the esports industry, like buying a streaming PC. I won’t be taking time off Fortnite because this is a big opportunity for me to start my career by streaming and posting a bunch of content during the off-season.

Your competitive career stretches way back to Season X. How do you feel about Fortnite now as opposed to back then?

Fortnite is more competitive now, due to the new talent coming up and the skill gap getting tighter and the constant change of the game. The prize pool has changed drastically from season x to now chapter 2 season 7, the prizes are considerably a lot smaller than what it was back then, which Is unfortunate but considering the state of Fortnite and where it is going, it's understandable. Fortnite is still lots of fun to play and the community within the game makes the game more competitive and brings a lot of challenges.

Tell us a bit about Team Delirium, how’d you sign with them and what was your experience with the org?

Team Delirium is an upcoming esports organization, one of the best teams in this community and has a lot of potential to make it big in this industry. They have an incredible staff/management team. I appreciate all the support they have given me and the support they carry on giving me. They have helped me with my socials, finding the next steps to take and ensuring everything is in my best interest. The members are like a family, very caring and easy-going and always there to help each other. I highly recommend Team Delirium and for people to keep an eye out for them as they have a very bright future ahead of them. I’m currently not signed to Delirium and am representing Delirium as a Free Agent.

Are there any parting words you’d like to get out there in the wake of your first-ever FNCS title?

For all the people still competing in Fortnite to keep going and keep doing great things. The community is only as good as we make it and we have something really special here.

We’d like to thank Justice for taking some time to speak with us after his monumental accomplishment. Also, thanks to Team Delirium and the organization’s Director EJ “Siteable” Wood for allowing us to speak with the Axe of Champions holder!