In the latest Pokémon Scarlet and Violet trailer, an adorable new Ghost Type has been revealed!

In continuation with other Generations, Pokémon continues pumping out fan-favorite Ghost Types. 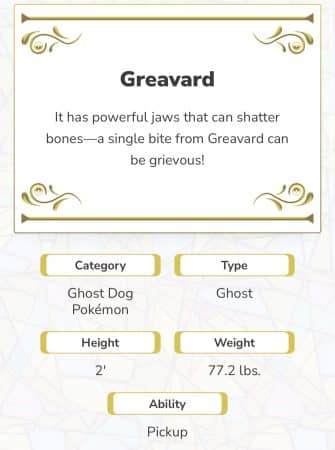 This adorable Ghost pup seems to be modeled after an English Sheepdog breed, with the addition of a ghastly purple flame atop it's head. As shown in the reveal video, it likes to lay almost completely submerged in the dirt, with only the candle above ground. It's likely that this is the state in which Greavard will be identifiable in the overworld of the game. Seeing as it has Pickup as its ability, competitive viability is going to come difficult for the everybody's new favorite pet unless its Hidden Ability is something that can give it better leverage.

Besides what we can see on the first entry sheet, there are a few things we can already see about Greavard! He can be seen using two moves in the "Meet Greavard" trailer, one that looks like a Special Ghost Type move, and one that looks like Bite or Crunch, a Physical Dark Type move. Its stats are still unknown, but it could potentially be a counter for Ghost and Psychic Types with just those moves, and with the addition of pickup, it becomes a pretty solid member of any trainer's team for a casual run-through of the game!

Some questions still left unanswered are whether or not it will have an evolution of some kind that will bring it up from its small size, and make it more powerful. Many people are also curious of what kind of stats it will have, and whether its Physical or Special Attack will be its reliable stat. Also, for such a small Ghost Dog, why is it 77.2 lbs? Is there something to this Pokémon that is even cooler than its appearance so far? With the game not far from release, we'll know soon!