Fortnite World Cup Solo Champion Kyle “Bugha” Giersdorf started teasing a massive announcement two days ago—one that he said ranked second on his list of most impactful career moments, only behind his $3M USD World Cup victory. The details behind said announcement were few and far between, and most fans in the scene assumed a co-ownership with Sentinels—his representing esports organization—or maybe the second Fortnite World Cup. Bugha hinted that this revelation is not an ad and that the world would find out at 12 PM ET on July 19.

After a brief lead-in, Bugha announced that he is the next member of Fortnite’s ICON Series, following the likes of Tyler “Ninja” Blevins, Neymar Jr, LeBron James, Travis Scott and countless other well-known names. It’s a milestone in an outstanding career for the 18-year-old, and it was a historical moment.

In front of 100k live viewers on Twitch, Bugha revealed the ICON Series trailer, where he ran down the entire cosmetic set. The Fortnite World Champion has a base skin with three styles, a World Cup back bling with his dog Zoey included, dual-wielded lightning pickaxes and the homer grind emote. Bugha joins Ninja, Loserfruit, Lachlan, TheGrefg and Lazarbeam. The skin drops in Fortnite’s Item Shop tomorrow, July 19, at 8 PM ET. Another tidbit in Bugha’s announcement is a new game mode, dubbed Bugha’s Late Game, which emulates competitive Fortnite’s wild end games. 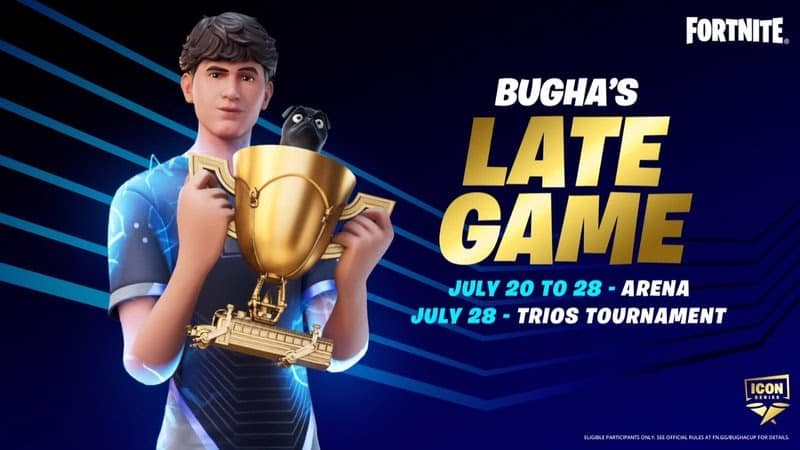 On top of the ICON Series skin, Epic also worked with Bugha to develop a game mode precisely aimed toward competitive Fortnite. While Arena Mode is a measuring stick for talented players, Bugha’s Late Game is purely a trios end game simulator. Matches begin in the third zone with set materials and inventories, and the last trio standing wins. There will be a tournament with $100K USD in prizing, which we’ll dive deeper into when the ruleset comes out.

It’s a legendary day for Fortnite’s inaugural Solo Champion, who will further etch himself in the game’s history. He follows in the footsteps of some celebrities, athletes and iconic content creators. Bugha’s ICON Series skin will drop into the Item Shop tomorrow, July 19 at 8 PM ET.