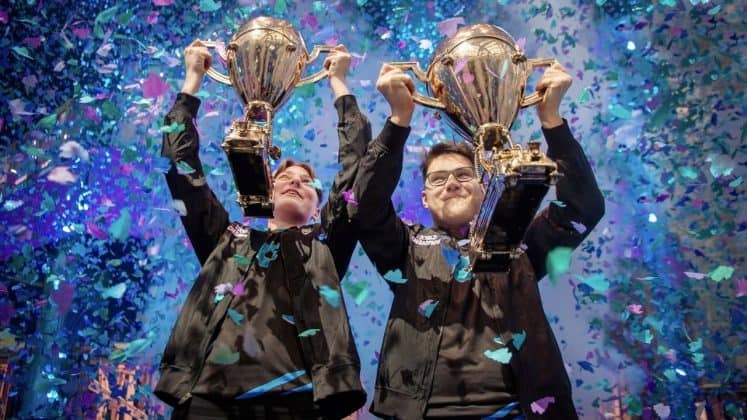 A TOS violation from aqua’s trio teammate resulted in an FNCS disqualification.

Fortnite Cup Champion David “aqua” Wang will not play in the Fortnite Champion Series (FNCS) Season 6 Semi-Finals after Epic disabled his teammate Veno’s account. According to a tweet by Veno, Epic discovered that he was not the original owner of his account. That infraction violates Epic’s Terms of Service (TOS), which resulted in an account lock.

It’s an unfortunate situation for all three players who had secured their spot in the FNCS Semi-Finals following three successful qualifying weeks. Now, none of them will have a chance to win a piece of the $3M USD prize pool or the Axe of Champions.

The former World Champion took to Twitter first in a now-deleted tweet, stating that his team is not eligible to compete because of Veno’s account situation. Another pro player followed up with aqua asking if it was a joke. The Austrian responded, stating simply, “Nope.”

Aqua last appeared on the FNCS scene in Season 4, where Epic disqualified him from the competition for conduct outside of the game. He returned out of nowhere after taking Chapter 2 – Season 5 off and resumed his previous position atop the European scene. It’s heartbreaking for aqua. He’s battled hand pain issues could have added another FNCS win to his resumè, furthering his case for being perhaps the greatest player of all time. Aqua’s trio teammate Chris “crr” Williams spoke on the situation with a similar sentiment.

im so unlucky man, last season teammate quits and then i still qual grands with a new trio and now this season my teammates account gets locked so i cant play heats, so much for being 1/9 or whatever who made the most fncs grands in eu

The current competitive player for FNATIC tweeted his response shortly after learning he would not play in the Semi-Finals.

“im so unlucky man, last season teammate quits and then i still [sic] qual grands with a new trio and now this season my teammates account gets locked so i cant play heats, so much for being 1/9 or whatever who made the most fncs grands in eu.”

Crr has experienced a string of bad luck but remains one of the best controller players in the European region. Epic’s decision to remove this team from heats certainly hits hard, and understandably so. Crr was on pace to become one of only a few players to qualify for seven of the eight FNCS events in history. With no qualifiers remaining, that is no longer possible.

He furthered his frustration in a follow-up tweet, stating, “i only play this game for fncs' thats why i legit dont care about pr or shitty cc's anymore and this season is just wasted.”

Rising talent Veno went on Twitter after the news broke, apologizing to crr. The young British competitor added that he might never see the $6K USD he stood to make, dating back to Chapter 2 – Season 5. Veno included a screenshot of an email conversation between himself and Epic Games support, which revealed their reasoning for locking his account.

“Over the weekend there was some back and forth on this during the competition you were participating in. After further investigating the issue over the past few days we have determined that you are not the original owner of the account you are playing on, and it was shared or sold in the past.” To end the email, the Epic employee wrote that buying accounts is a violation of TOS.

i bought it year+ ago because i didnt want to have no skins, I never thought i'd be T1 or T2 like I am now. didn't realise it would bite me in the ass, maybe its karma for snaking fray or all the bad shit i've done. i'm just sat here crying. idk what to do anymore.

In a separate tweet, Veno explained that he bought an account over two years ago because he didn’t have any skin. Aqua, crr and Veno won’t have the chance to compete in the Season 6 Semi-Finals due to this unprecedented turn of events. Instead, another team will likely fill their slot based on Series Points. It’s difficult not to agree that Season 6 feels wasted for these three talented players. They’ll have to sit on the sidelines and look forward to Season 7.