Fortnite: Unexpected Triumph, Heartbreak & Legacy, FNCS Season 7 Had It All 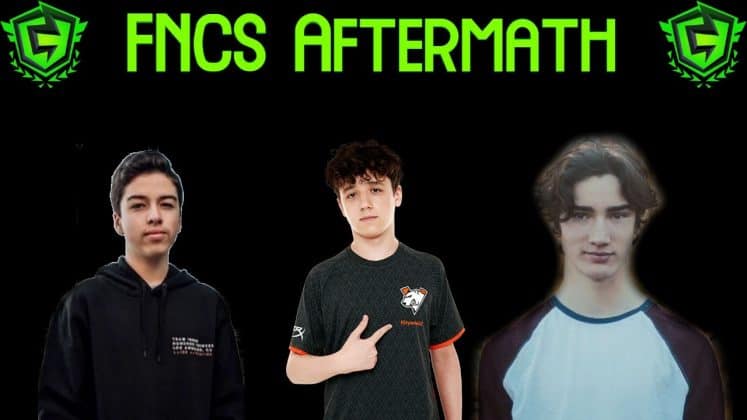 ESTNN revisits some of the most relevant storylines in the wake of FNCS Chapter 2 – Season 7.

The competitive Fortnite scene has officially entered the post-Fortnite Champion Series (FNCS) aftermath. Season 7 marked the fourth consecutive round of trio competitions, which have become the standard. We’ve seen numerous winners across the last four seasons, but Season 7 felt different. The intensity between players in the European, NA East and NA West regions stood out amongst the pack.

Fortnite’s FNCS Season 7 Finals had no shortage of excitement, drama, heartache and magnificent plays. Some trios saw their hard work pay off in the form of the coveted Axe of Champions in-game reward and a sizable share of $3M USD. Others emerged as viable threats to their regional opposition, and ones to keep an eye on in Season 8.

Today, ESTNN recaps some of the major storylines to come out of FNCS Season 7 as we prepare to turn the page to a new season of Fortnite Battle Royale.

Fairweather Fortnite fans likely won’t know the names Dukez, Users and Justice, but these three have competitive careers that date back to Season X—more than two years ago. Their results to this point in Fortnite history left a lot to be desired, but if there’s one thing that is evident about this game, anything can happen.

Despite relying on Series Points to reach the Season 7 FNCS Semi-Finals, Userz, Dukez and Justice hit their stride at an ideal moment. The three NA East underdogs cruised to an effortless Heat C victory, clinching them a spot in the Season 7 Finals.

And just like that, @dukezfn @UserzFN and @Justicee not only secure the VR in the final game but they are your NA East Chapter 2 Season 7 #FNCSFinals Champions!

The three players rode an uncontested Catty Corner drop to a lead at the end of day one. While their lead was sizable, nothing is over until it’s over. However, the eventual champions did not waver under pressure, despite having perennial second-place finishers Commandment, Cented and Edgey in hot pursuit. Userz, Dukez and Justice capped off their FNCS run in style with a final game Victory Royale.

Their unprecedented win speaks to the mystique of competitive Fortnite. Anyone—even the underdogs—can put together exceptional performances and achieve ultimate glory. It was a deserved win for Userz, Dukez and Justice, who won their first Axe of Champions despite no one calling it beforehand.

The Russian/Ukrainian combination of Kiryache, Stormyrite and Toose showed up massively in the European FNCS Season 7 Finals. After finishing in sixth place last season, this team went against the typical EU mindset and stuck together. That decision paid dividends in Season 7 as Kiryache, Stormyrite and Toose earned four top tens and a runner-up in Qualifier 2, granting them an automatic pass to the FNCS Finals.

Like Userz, Dukez and Justice, Kiryache’s team somewhat flew under the radar ahead of the Season 7 Finals. While predictors selected more recognizable names—Kiryache, Stormyrite and Toose did not allow that to deter them. On day one, the three players led after a string of unexpected bans nullified results from games four and five.

.@stormyrite @KiryacheFN and @TooseFN clutched the VR in Game 10 and currently sit in 1st in the EU Standings with two games left 👀🤯 pic.twitter.com/N4PS05L44f

Day two proved the ultimate test for Kiryache, which they passed with flying colors. On the shoulders of Kiryache’s three clutch Medkits, he secured the EU Axe of Champions for his team. It was a great end to one of the closest leaderboards in recent history. The three players celebrated on Twitter and rightfully flaunted their new hardware, and of course, the $300K USD grand prize.

NA West players Arkhram, EpikWhale and rehx are approaching immortal status in their region. Many recognized this team as one of the best ahead of the Chapter 2 – Season 7 FNCS Finals. Some are now calling them the best. The Season 4, Season 5 and Season 6 Champions had everyone’s attention.

Could they further cement their legacy with a fourth consecutive FNCS win? The prospect seemed evident to those who have witnessed Arkhram, EpikWhale and Rehx’s body of work since Season 4. Although they trailed on day one, it was only a matter of time until the former three-time champs found their footing.

Reminding everyone else that they are still in this fight, @Arkhram1x, @rehxfn & @EpikWhale snatch up the Victory Royale in Game 11! pic.twitter.com/bpywuY32Mw

Day two followed the script that most watchers anticipated. Favs, Snacky and Kenshi were firmly in the lead, but two other NA West teams were in hot pursuit. The leaderboard changes over the final session were exactly what competitive Fortnite fans love to see. No team ran away with the tournament. Instead, the Axe of Champions remained in limbo until the final moments of game number 12.

Arkhram, EpikWhale and Akrhram’s music then played as the three-time champs would ultimately add another trophy to their collection. A Victory Royale and runner-up finish closing competition handed the best of NA West their fourth straight FNCS title. It was a drama-filled ending to the Season 7 Finals, and just another installment to the growing legacy of perhaps the world’s best trio.

Many teams across Fortnite’s seven competitive regions reached a milestone of some sort, but none is more impressive and disheartening than perennial NA East runners-up Cented, Edgey and Commandment. Ahead of the Season 7 Finals, this trio cemented itself as the most consistent and one of the best without question. However, their success never translated to an Axe of Champions despite their best efforts.

Three straight second-place FNCS finishes essentially meant Cented, Edgey and Commandment were due for a win as long as everything went their way. The three players trailed by a wide margin but were determined to claim the top spot on day one. They put forth a valiant effort on day two but ultimately found themselves in the familiar silver podium position.

On the one hand, it’s almost unheard of to place second for so long. However, it has to be demoralizing for three of the world’s best players. They’ll go again next season with hopes of getting the runner-up monkey off their back.

NA West standout controller player Reet had an absolute breakout season in Chapter 2 – Season 7. Before getting to his final FNCS placement, we can’t ignore Reet’s dominance across two regions. He kicked off the season with a third-place finish in the solo FNCS All-Star Showdown. Reet proceeded to win three Solo Cash Cups—one of which was on Asia servers. He has established himself as more than just another talented controller player.

Reet’s successful season kicked into another gear in the FNCS Finals, where he, Falconer and Chris were one of the three horses in the race for NA West’s Axe of Champions. As previously stated, the competition came down to the closing moments, where Reet, Falconer and Chris claimed the tournament’s final Victory Royale. Unfortunately, they came up ten points short of the now four-time FNCS Champions.

It was a significant season for Reet, who could compete with the best of NA East and Europe if he chose that path. He’ll likely stick around NA West, barring any career-changing decisions. The sky's the limit for Reet.